Cytochrome P450 2J2 (CYP2J2) is one of the recently discovered enzymes that is involved in the metabolism of several drugs. It is mainly an extrahepatic enzyme which can, to some extent, explain some the drugs’ side effects such as cyclophosphamide (Cy). Cyclophosphamide is an alkylating agent that is commonly used in conditioning prior to stem cell transplantation. It is a prodrug that is bio-activated by several CYPs including CYP2J2. Cy is known to have several side effects and its extrahepatic activation by CYP2J2 may explain the mechanism of some of these side effects. On the other hand, CYP2J2 is overexpressed in several types of cancer and its inhibition (e.g. by Cy) reduces the cancer cells survival. Taken together, CYP2J2 is considered as a potential therapeutic target and prognostic marker for cancer patients in addition to its role in drugs extrahepatic metabolism. 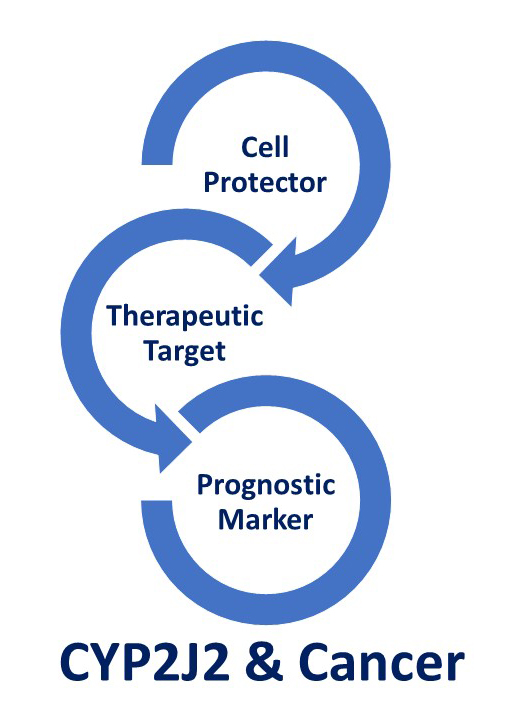 Recently, the 60th anniversary of the first successful stem cell transplantation, performed by the Nobel Prize laureate E. Donnall Thomas in 1957 [1], was celebrated. In this editorial letter, we discussed the role and importance of cytochrome P450 2J2 (CYP2J2) in cyclophosphamide (Cy) bio-activation to highlight and explain several drug interactions in addition to the acute and chronic treatment toxicity reported after treatment with Cy.

Hematopoietic stem cell transplantation is performed in several steps starting with a conditioning regimen, which eliminates malignant cells, provides a space for the donor cells, and provides enough immune suppression of the host immune system to avoid graft rejection. The conditioning protocol before conducting HSCT is based on administering chemotherapy (high doses of cytostatic drugs) along with or without total body irradiation (TBI). Immediately after conditioning, the patient receives either syngeneic or allogeneic stem cells. This causes the patient to experience an aplastic/neutropenic phase followed by a post-engraftment period.

Total body irradiation with or without cytostatic drugs was used for many years and is associated with acute and chronic complications[3,4], such as stomatitis, enteritis, and infection-related complications. Furthermore, the development of secondary leukemia post‑transplantation in donor-derived cells has been reported[5]. TBI is also associated with late complications such as secondary malignancies, including solid tumors, cataracts, CNS damage in pediatric patients, impaired growth, and endocrine dysfunction [6,7]. To avoid TBI, especially in pediatric patients, chemotherapy-based conditioning regimen protocols have been developed [6]. Nitrogen mustard was developed during World War II and was the first alkylating agent to be used for treating lymphoma. Inter-crosslinking and intra-crosslinking of DNA are the underlying mechanisms by which nitrogen mustard leads to cell death of rapidly dividing cells, including cancer cells. Ideally, TBI and cytostatic drugs should exert minimal toxic effects on normal host cells and tissues [8].

Cyclophosphamide (Cy) is an alkylating agent that was approved for medical use in 1959 and still plays a key role in cancer therapy. Cyclophosphamide is commonly used at high doses as a part of the conditioning regimen before conducting HSCT [6]. Besides its role in conditioning, Cy is used widely in moderate doses to treat malignancies, such as ovarian cancer, breast cancer, small-cell lung cancer, and neuroblastoma. Moreover, Cy at low doses is also used as an immunosuppressive drug for treating rheumatoid arthritis, systemic lupus erythematosus, Sjögren´s syndrome, and other autoimmune diseases. Recently, Cy was used for treatment after HSCT to prevent rejection and decrease the severity of graft-versus-host disease (GVHD) [7]. As an alkylating agent, Cy covalently binds to the guanine-N-7 base of DNA. This interaction enhances DNA damage that triggers apoptosis when the cellular machinery cannot be repaired.

Cyclophosphamide is a prodrug that needs to be bio-activated to exert its effect. It is metabolized via several CYPs into different metabolites but mainly into the active metabolite 4‑hydroxy‑cyclophosphamide (4‑OH-Cy), corresponding to more than 80% of the total dose of Cy [9]. Most of the final products are metabolized into substances that have cytotoxic effects (Figure 1) [10,11,12]. 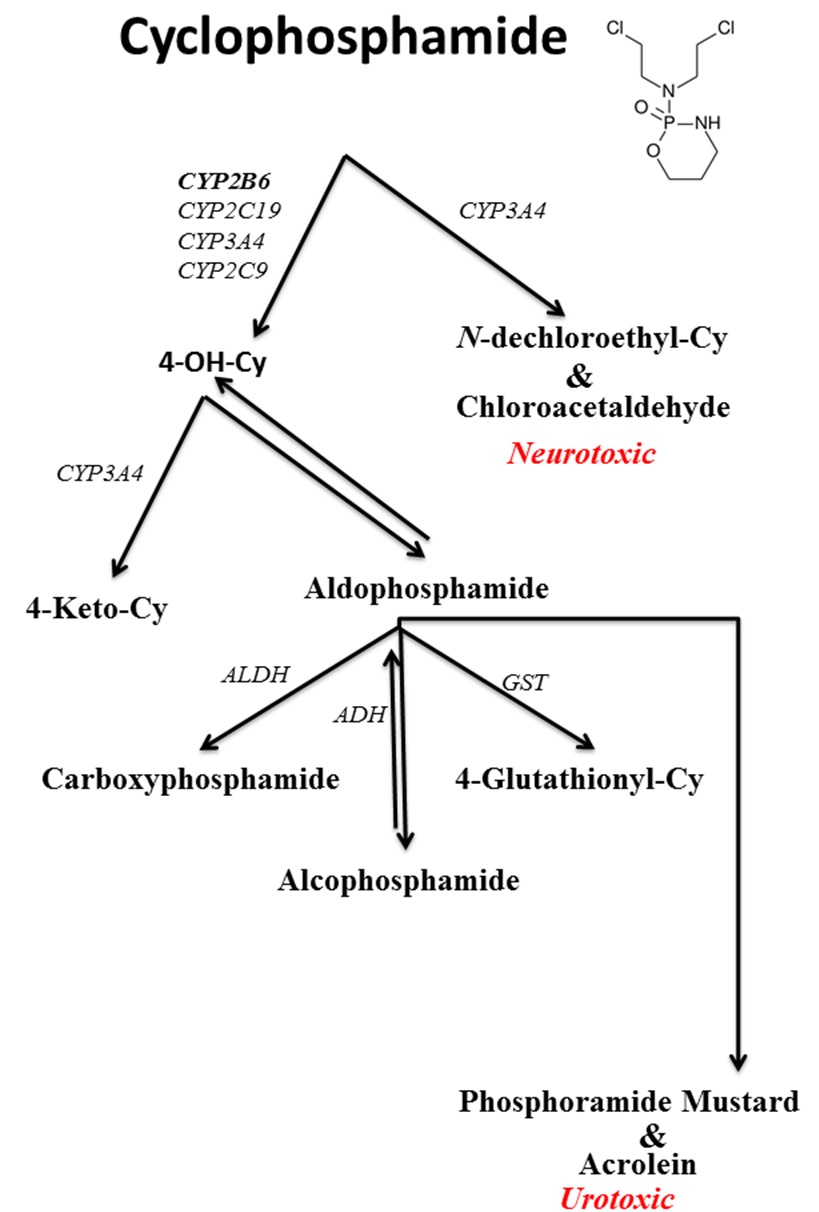 Figure 1 The metabolic pathway of cyclophosphamide.

Interestingly, CYP2J2 is involved in the metabolism of Cy [16]. It is expressed mainly in the extrahepatic compartments, i.e., in the intestine and the cardiovascular system [17,18,19]. High CYP2J2 activity in the intestine contributes to the first-pass metabolism of several drugs [20,21,22], while in the human heart, CYP2J2 is responsible for the epoxidation of endogenous arachidonic acid to four regioisomeric epoxyeicosatrienoic acids (EETs) that are released in response to specific stimuli, such as ischemia [23].

Furthermore, CYP2J2 is related to malignancy. Several studies have reported that CYP2J2 is highly expressed in human-derived and mouse-derived malignant hematological cell lines, ovarian and lung cancer cell lines, as well as peripheral blood and bone marrow cells of leukemia patients [24]. High expression of CYP2J2 is associated with accelerated proliferation and attenuated apoptosis in different malignancies, including metastases [24,25,26]. Additionally, the inhibition of CYP2J2 is associated with suppressed proliferation of human cancer cells both in vitro and in vivo [27], which implies that CYP2J2 has a protective mechanism for cancer cell survival, and its inhibition was shown to suppress the proliferation of cancer cells [27].

A study found that Cy-treatment upregulated the expression of CYP2J2; however, the inter-individual variation was high [28]. Despite the high variability, the expression of CYP2J2 was significantly correlated with the bio-activation of Cy, as determined by the concentration ratio of 4-OH-Cy/Cy [28]. The inhibition of CYP2J2 in HL-60 cells can decrease the formation of 4‑OH‑Cy and concomitantly increase cell viability, which supports the role of CYP2J2 in Cy bioactivation [24]. In some populations, the ratio Vmax/Km (Vmax is the maximum velocity of the reaction where all the enzymes are saturated with the substrate and Km is the concentration of substrate at which half of the maximum velocity is achieved) for CYP2J2 was found to be higher than that obtained for CYP2B6 [29]. This suggested that CYP2J2 might be the predominant enzyme responsible for Cy bioactivation in these patients and not CYP2B6, as previously reported [10,13].

The above-mentioned studies, along with our observations, highlight the importance of the role of CYP2J2 in Cy bio-activation and its implication on drug-related toxicities, especially specific organ toxicities where CYP2J2 is highly expressed, for example, in the urinary bladder, heart, and intestine. Hemorrhagic cystitis or impairment in the removal of water from the urinary bladder and changes in the permeability of the intestine accompanied by diarrhea as a marker for intestinal barrier dysfunction are some examples of toxicity that occur after Cy-treatment in several patients [30]. A high dose of Cy is associated with acute cardiac toxicity, such as heart failure or a decrease in systolic function [31]. Damage to the endothelial cells in the mesenteric artery is also associated with Cy-treatment [32,33].

These toxic effects, along with the alloreactivity following HSCT, suggest that the bio-activation of Cy to 4-OH-Cy via CYP2J2 might also contribute to the occurrence of GVHD observed in transplanted patients. However, further studies are required to investigate the effect of the inhibition of CYP2J2 on the bio-activation of Cy to determine drug efficacy and clinical outcomes. Moreover, drugs metabolized via CYP2J2 and concomitantly used during Cy-conditioning might significantly alter Cy kinetics, along with the exposure, treatment efficacy, and toxicity of Cy, which might explain some of the major side effects reported after HSCT.

To summarize, the CYP2J2 gene is highly expressed in several malignancies. Further studies need to be conducted urgently to elucidate the role of CYP2J2 as a biomarker for different malignancies, treatment efficacy, personalized medicine, and/or as a target for cancer therapy.

The authors express their gratitude to Ajman University UAE, the Swedish children Cancer society (BCF) and Cimed for their support.