Plasmapheresis for Thrombotic Microangiopathy Due to a Post-transplant Lymphoproliferative Disorder

We report a case of thrombotic microangiopathy (TMA) diagnosed in the kidney allograft of a 59-year-old woman who had developed plasmacytoma type monomorphic posttransplant lymphoproliferative disorder (PTLD) 30 years after a simultaneous pancreas and kidney transplant. This report demonstrates a rare etiology of TMA in a kidney allograft occurring in association with PTLD-associated monoclonal gammopathy. The main teaching points are: 1) PTLD may be considered in the work-up of a new TMA in the immunosuppressed post-transplant setting, and 2) a paraprotein-associated condition should be considered as clinically relevant coexistent in a patient with TMA because paraproteins are over-represented in patients with otherwise unexplained TMAs.

Thrombotic microangiopathy (TMA) in the post-transplant setting is a rare but serious hematologic complication, defined histologically by the presence of arteriolar and/or glomerular thrombosis, endothelial injury, mesangiolysis, and frequently in the chronic stage by double contours of the glomerular basement membrane [1]. Numerous processes can initiate TMA. Recently, monoclonal immunoglobulin was reported as another potential trigger of TMA, with monoclonal gammopathy of undetermined significance (MGUS) being the most commonly cited initiator.

A 59-year-old woman presented to our emergency department in August 2019 following two weeks of progressive abdominal pain and multiple episodes of non-bloody diarrhea of unclear etiology. Her past medical history included a simultaneous pancreas and kidney transplant in 1990 due to diabetes mellitus type 1, after which she developed biopsy-proven early acute cellular rejection within the first-year post-transplantation. Her most recent kidney biopsy in April 2019 (29 years post-transplant) showed severe transplant glomerulopathy and peritubular capillary basement membrane multilayering without microvascular inflammation and C4d staining in peritubular capillaries, thus being read as advanced chronic antibody-mediated rejection. According to the Banff classification, it was consistent with grade I chronic/sclerosing allograft nephropathy. Clinical timeline is shown in Figure 1.

Her immunosuppressive regimen included cyclosporin, mycophenolate mofetil, and prednisone. On review of systems, she was hemodynamically stable and denied fever, nausea, or vomiting. Physical examination revealed only a mildly distended abdomen. Laboratory workup showed potassium at 5.4 mmol/L (N: 3.5-5.1); BUN at 34 mg/dL (N: 7-19); creatinine at 3.2 mg/dl elevated from her baseline around 2.2 mg/dL (N: 0.55-1.02); and albumin at 3.0 g/dL (N: 3.9-5.0). Urinalysis was negative for hematuria but positive for proteinuria.

Her last donor-specific antibody (DSA) test was negative as of March 2019, with a mean fluorescent intensity (MFI) of 0. Previous DSA tests from 2016-2018 revealed anti-DQ2 antibody with MFI <2000. Levels of amylase, lipase, and blood glucose were all normal, indicating adequate function of her grafted pancreas.

An ultrasound of her transplanted kidney showed no evidence of obstruction. Her symptoms and lab work were suggestive of worsening chronic antibody-mediated rejection and she was admitted to our inpatient transplant medicine service for further evaluation and treatment. An expanded workup was performed upon admission including a CT of the abdomen and pelvis. This demonstrated new ascites, peritoneal implants, nodular soft tissue surrounding the transplanted pancreas, and an irregularly thickened and dilated bowel loop (Figure 2). 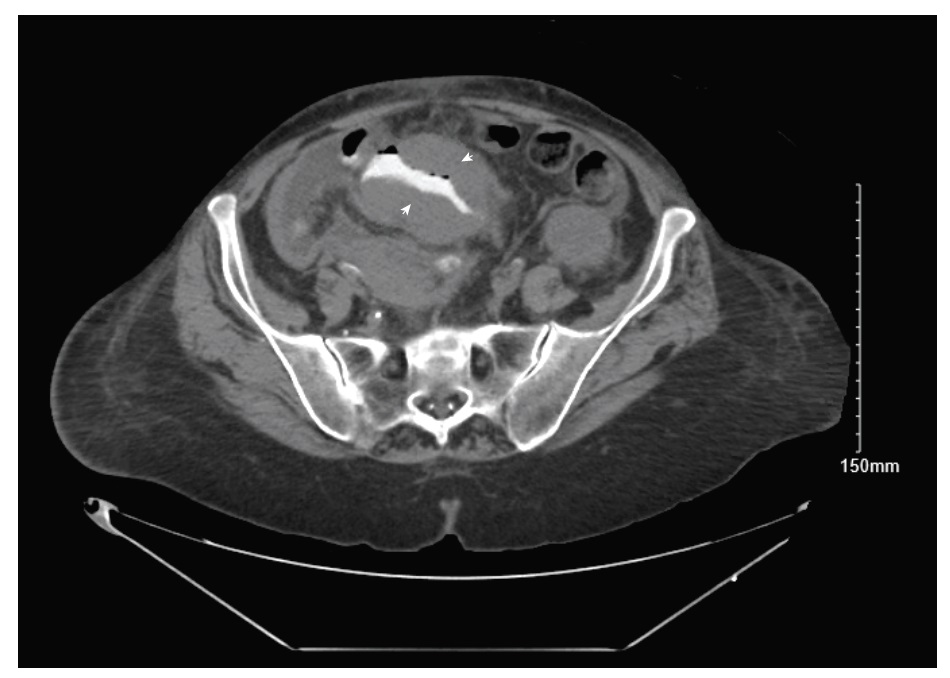 Figure 2 CT scan of the abdomen and pelvis revealing irregular wall thickening (arrow) with aneurysmal dilatation of a loop of small bowel.

An ultrasound-guided biopsy of the small bowel was performed, which revealed sheets of atypical appearing plasmacytoid cells with occasional mitotic figures (Figure 3a and 3b). The cells were strongly positive for CD138 and MUM-1 by immunohistochemistry, consistent with plasma cells (Figure 3c and Figure 3d). Staining for kappa and lambda light chains showed the cells to be lambda-restricted, supporting a clonal process (Figure 3e and Figure 3f). A stain for CD20 was negative and EBER in situ hybridization performed due to the patient’s history of organ transplant was also negative (data not shown). 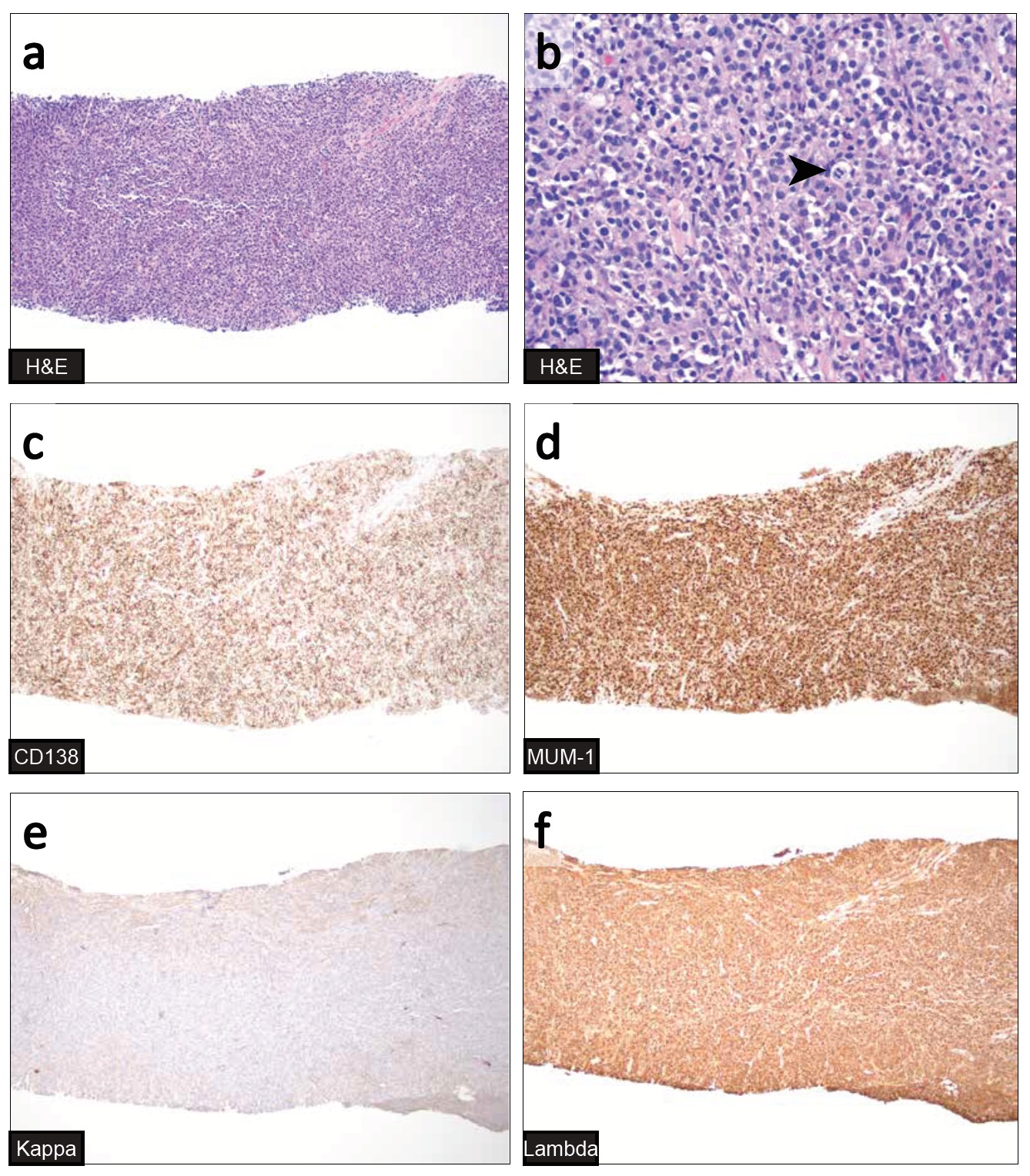 A concurrent kidney biopsy showed segmental widening of the subendothelial zone and double contours of the basement membrane along with a mesangial proliferation with matrix expansion (Figure 4a and Figure 4b). There were numerous kappa and lambda-positive protein resorption droplets in the cytoplasm of proximal tubular cells with a slight lambda predominance (Figure 4c and Figure 4d). While a biopsy from April (only 5 months prior) had demonstrated active antibody-mediated rejection, the current biopsy failed to show features of active antibody-mediated rejection by both light and electron microscopy, including a lack of microvascular inflammation and C4d staining in peritubular capillaries. However, surprisingly electron microscopy revealed marked worsening of subendothelial electron-lucent widening (Figure 4e and Figure 4f). This was in contrast to relatively few fibrin tactoid deposits in a segment of electron-lucent widened subendothelial space seen in the renal biopsy in April. 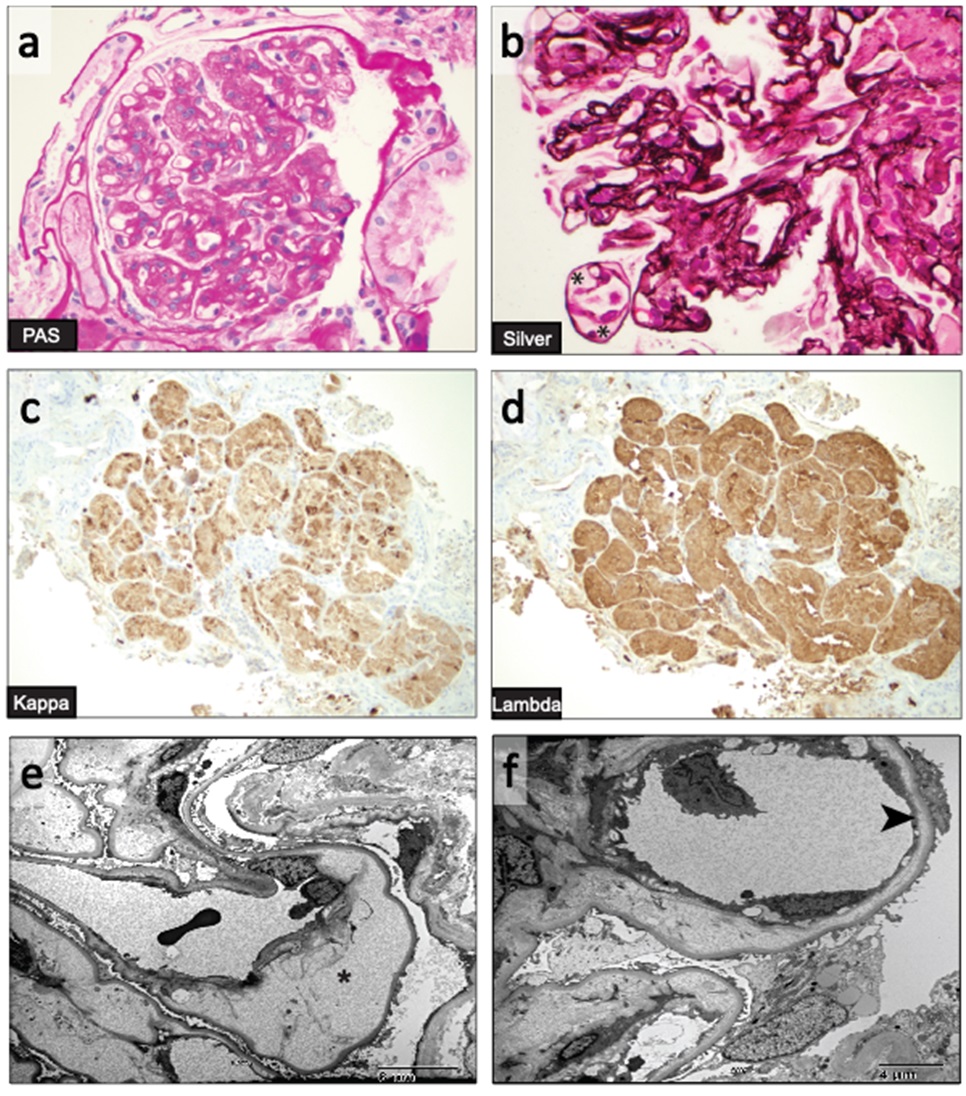 The combined findings in these two biopsies are most consistent with chronic active thrombotic microangiopathy instead of chronic antibody-mediated rejection. Additional laboratory testing showed a hemoglobin of 7.6 g/dL (N:11.6-15.6) and no significant increase in lactate dehydrogenase. Her bilirubin, platelet count, and haptoglobin were within normal range. A blood smear showed no schistocytes.

After discharge, hematology and oncology were consulted and recommended a modified treatment regimen given the patient's complicated medical history, deconditioned physical state, and a collective desire not to disturb the function of her other organs. She underwent a reduction in her immunosuppression including: discontinuing her mycophenolate, decreasing her dose of cyclosporine, and continuing her prednisone. She also received two cycles of daratumumab followed by cyclophosphamide, bortezomib, and dexamethasone.

While she had a detectable response based on improved myeloma labs and stable creatinine during this interval, her PTLD relapsed after 2 months and her kidney function began to decline. She was readmitted, and three additional plasmapheresis procedures were performed in 5 days with no significant improvement. Chemotherapy was stopped due to its side effects and lack of apparent efficacy. The patient was informed of her poor prognosis and short life expectancy. She was transitioned to home care with hospice. Approximately five months following her diagnosis of PTLD, the patient died.

In the present case, the patient had received a simultaneous pancreas and kidney transplant about 30 years prior to PTLD diagnosis and had a clinically stable chronic antibody-mediated rejection. The finding of a monomorphic PTLD, plasmacytoma-like subtype, in conjunction with an abrupt deterioration of kidney allograft function secondary to biopsy-proven chronic active TMA, and a recent prior kidney biopsy showing chronic antibody-mediated rejection and diabetic nephropathy all raised concern for a cause-and-effect relationship between her PTLD and TMA.

Paraprotein-associated TMA, a spectrum of renal disease related to plasma cell dyscrasias, is caused by the deposition of monoclonal paraproteins within the renal parenchyma [3]. Although uncommon, paraprotein-associated TMA can occur secondary to monoclonal gammopathy, even without accumulation of the paraprotein or its derivatives within the kidney itself. This is due to a consequence of endothelial cell injury by TMA instead of protein deposition per se. A study by Ravindran et. al. documented an unexpectedly high prevalence of monoclonal gammopathy of undetermined significance (MGUS) in patients with TMA which could not be attributed to other common causes, such as hemolytic-uremic syndrome [4]. Having ruled out other causes of renal allograft dysfunction in our patient, it is highly likely that her TMA was a result of the monoclonal gammopathy associated with her PTLD.

Recognizing TMA and initiating treatment are crucial since the mortality is high, with reports of 72-94% [6]. In 1991, a controlled trial documented a drastically improved survival rate of 78% in patients with acquired thrombotic thrombocytopenic purpura (TTP), a subtype of TMA, who received plasma exchange [7]. Glucocorticoids are also considered standard treatment, while rituximab, eculizumab, and other immunosuppressive agents are appropriate in patients who experience a complicated clinical course.

Lymphomas constitute up to 21% of post-transplant malignancies and in general are associated with worse clinical outcomes in this population compared to non-transplanted patients [8]. PTLDs are a subset of lymphoproliferative disorders, which by definition occurs in the post-transplant setting, and are often (but not always) EBV-positive and classified as: 1) early lesions (non-destructive), 2) polymorphic, or 3) monomorphic [9].

In the updated 2016 World Health Organization (WHO) classification, early lesions typically appear as a heterogeneous mixture of B-cells and T-cells. They are non-effacing lesions that lack evidence of associated organ/tissue destruction and are almost always polyclonal, although rarely small clonal populations of B-cells and T-cells may be detected.

Early lesions of PTLDs are generally EBV-positive and further histologically subclassified as: 1) plasmacytic hyperplasia, 2) infectious mononucleosis, or 3) florid follicular hyperplasia. Polymorphic PTLDs appear histologically similar to early lesions, however they are destructive entities that efface surrounding tissue and/or produce clinical evidence of organ dysfunction. Finally, monomorphic PTLDs meet WHO criteria for a high-grade lymphoma (with rare exception) and are classified as PTLD by virtue of their occurring in the post-transplant setting. While early lesions and certain polymorphic PTLDs may be successfully treated with reduced immunosuppression, monomorphic PTLDs are typically aggressive neoplasms that require treatment with chemotherapy.

In the immunosuppressed post-transplant setting, PTLD should be considered in the work-up of a new TMA [10]. Although the update 2019 guidelines on the use of therapeutic apheresis for TMA do not specifically describe a role of apheresis in the setting of either PTLD or solid organ-transplant TMA [11], apheresis was reportedly performed in certain cases with monoclonal gammopathy [12] and isoagglutinins [13].

In our case, the patient was treated with 6 cycles of plasma exchange every 48 hours. The creatinine level was 3.23 mg/dL prior to the initiation of plasma exchange and declined to 2.07 mg/dL at discharge. Although the recovery of creatinine could be partly due to rehydration treatment for the diarrhea, clearance of circulating paraprotein by plasma exchange would potentially benefit as a temporizing measure in this case. She was later treated with chemotherapy, and her kidney allograft function remained stable for 2 months before her PTLD relapsed and became unresponsive to treatment. Her kidney allograft function ultimately started to decline, and she required an additional 3 cycles of plasma exchange before transitioning to comfort measures.

In conclusion, we share our experience with plasma exchange in the setting of PTLD-associated TMA. Controlled studies are encouraged to more rigorously assess its therapeutic potential in this setting.