Clinical presentation and progression of Wilson’s disease can be diverse in different groups of patients. While young children most likely to present with acute or chronic liver failure, older children and adults may exhibit extrahepatic manifestation like neuropsychiatric, cardiac, renal, pancreatic and several others. Diagnosis of Wilson’s disease is based on the combination of specific clinical findings, laboratory and genetic testing. There are different modalities of treatment available for this condition. Liver transplantation has become a acceptable treatment option for acute and chronic liver failure related to Wilson’s disease. It allows for resolution of metabolic disorder and hepatic disease progression. There are no definitive criteria and established outcomes in transplantation of the patients with Wilson’s disease who have different degree of neuropsychiatric presentation. Therefore, it is very important to create specific criteria for selecting of these patients before transplantation and to have short-and long-term follow up system to improve their outcome and survival.

A 15 year-old, 28 kg male, without any medical conditions developed signs of liver disease at the age of 9 when he was first diagnosed with elevated bilirubin. His disease rapidly progressed with development of drooling, headaches, and speech disturbance. He failed Penicillamine and Zinc therapies, and presented to our center with tremors, stiffness, developmental and cognitive delays, dysarthria, dysphagia, and inability to ambulate. According to the family, the child was compliant with the treatment. At the time of admission he was dependent on G-tube feedings for nutrition and was wheelchair-bound. His Magnetic Resonance Imaging (MRI) scan of the brain showed significant volume loss, atrophy, and mineralization of the basal ganglia and substantia nigra (Figure 1). Ophthalmologic examination demonstrated Kayser-Fleischer rings. Liver biopsy performed shortly after admission, revealed signs of cirrhosis, mild portal inflammation, bile duct proliferation, and focally increased stainable copper on Rhodanine stain. Treatment with Trientine and Zinc failed to halt the progression of neurologic symptoms. 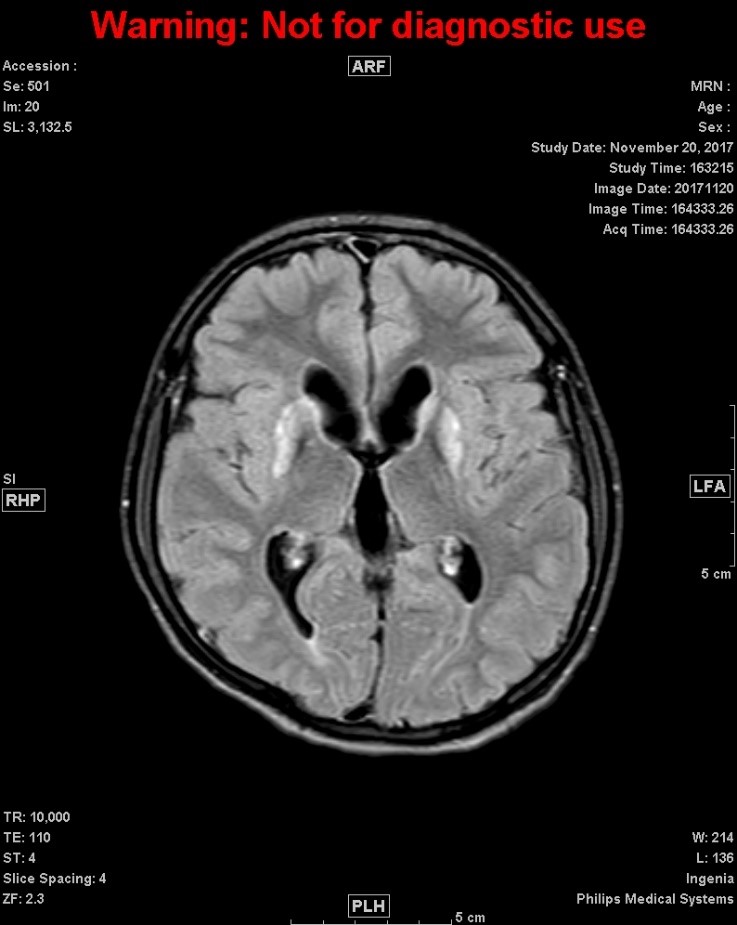 After thorough multidisciplinary evaluation and bioethical committee approval, the patient was listed for liver transplant with Pediatric End Stage Liver Disease (PELD) score of 40. Additional points were given for the failure to thrive and devastating neurologic comlications of the disease. The transplant team and the patient’s family were aware that neurological symptoms may not be reversible after the surgery. There was no living donor liver offer available for this patient. Shortly after listing the patient received deceased donor ABO compatible whole liver graft. The liver transplant was uneventful, and required no blood or blood product transfusion. No signs of significant portal hypertension were noticed during the surgery. Eight months after transplantation, the patient became verbal with normal swallowing, gained wait, and demonstrated ability to ambulate. His tremors and stiffness were completely gone. We were able to observe complete resolution of his neurologic deficits in twelve months after transplantation.

Wilson’s disease (WD) is an inherited autosomal recessive disorder of copper metabolism that affects approximately 1 in 30,000 people. The carrier rate of this disease is 1 in 90 [1]. The disease results from dysfunction of the copper-transport adenosine triphosphatase mechanism in the ATP7B gene in the liver. This gene is responsible for excreting copper into the bile [2,3]. Failure to incorporate copper into the ceruloplasmin is also a consequence of the dysfunctional ATP7B protein. The hepatic production and secretion of the abnormal protein apoceruloplasmin results in decreased levels of ceruloplasmin, which is found in most WD patients [4]. The abundance of disease-specific mutations and their location at multiple sites across the genome have made molecular genetic diagnosis difficult. The subsequent copper accumulation, primarily in liver and brain, leads to hepatic and neurological manifestations [5].

Wilson’s disease has a highly variable onset and clinical course [6,7,8]. In many cases, symptoms of the disease are nonspecific. Children and young adults are more likely to present with progression of liver disease. The presentation can vary from fulminant hepatic failure to a slow progression of decompensated cirrhosis. Late onset WD presents with neuropsychiatric symptoms, such as tremor, dysarthria, ataxia, rigidity, dyskinesia, cognitive impairment, and mood disturbances. Many patients with psychiatric or neurologic manifestations may have asymptomatic cirrhosis. Extra-hepatic manifestations include renal symptomatology such as aminoaciduria, nephrolithiasis, arthritis, premature osteoporosis, cardiomyopathy, hyperparathyroidism, pancreatitis, and infertility [9,10,11,12,13,14].

According to the latest guidelines published by the European Society for Pediatric Gastroenterology, Hepatology and Nutrition (ESPGHAN), European Association for Study of the Liver Disease (EASL), and Indian National Association for Study of the Liver (INASL)the diagnosis of WD is based on the combination of biochemical laboratory tests assessing copper metabolism, a broad spectrum of clinical features, and molecular analysis of the mutations in the ATP7B gene [15,16,17]. Corneal copper deposition called the Kayser- Fleisher ring, hemolytic anemia due to deficiency of ceruloplasmin, and neurologic symptoms are considered to be the most common clinical symptoms. Twenty-four hours urine copper, hepatic copper concentration, ceruloplasmin, and the presence of the ATP7B gene mutation are laboratory tests used to confirm the final diagnosis of WD.

In 2001, at the 8th International conference on Wilson’s and Menkes disease in Leipzig the scoring system for the diagnosis of WD was discussed. A combination of clinical and biochemical tests with the score ranging from 0 to 4 for each test were developed. The aim of this system was to provide objective criteria with high sensitivity and specificity for the diagnosis of Wilson’s disease. The patients with the total score of at least 4 are diagnosed with WD. Approximately five percent of all WD patients present with new onset acute liver failure, and require emergency liver transplantation that is life saving [18]. According to the studies by McCullough et al and Schilisky et al, the diagnosis of Wilson’s disease in the acute liver failure setting is more challenging because traditional copper metabolism parameters are less reliable, and specific [19,20]. Korman et el demonstrated that the ratio of alkaline phosphatase to total serum bilirubin with a value of less than 2, in combination with the ratio of aspartate aminotransferase (AST) to alanine aminotransferase (ALT) with a value of greater than 2.2, has 100% sensitivity and specificity [21]. These tests are proven to be reliable for the adult patient population with a relatively low Model for End Stage Liver Disease (MELD) score. In pediatric patients, bone-derived alkaline phosphatase can play a role in making the ratio of AST to ALT of 2.2 less reliable. Koppikar et al [22] proposed the Wilson’s scoring index, which is composed of the international normalized ratio (INR), AST, white blood cells, albumin, and bilirubin for pediatric patients.

Until transplantation can be performed, temporizing measures like plasmapheresis [23], exchange transfusion [24], fractionated plasma separation and absorption (FPSA) [25], and molecular adsorbent recycling system (MARS) [26] can be helpful.

There is minimal data available on the predictors of outcome on transplanted patients with varying degrees of neuropsychiatric symptoms of Wilson’s disease, and their long-term survival. Medici et al presented a retrospective multicenter analysis of the outcome of 37 patients transplanted for Wilson’s disease [36]. More than a third of the patients had multiple presentations of neuropsychiatric compromise. The authors used a scoring system to retrospectively assess the patient’s pre-and post-operative neurological status. Reported patient and graft survival at 3 months, 12 months, 3 years, 5 years, and 10 years after transplantation were, respectively, 91.8%, 89.1%, 82.9%, 75.6%, 58.8%, and 85.3%, 83%, 77.1%, 70.3%, 47.2%.

According to the authors, neurologic symptoms significantly improved or completely resolved in 70 % of the patients after transplantation, but survival in this cohort was lower than in patients with liver disease alone (P= 0.04). Wang et al demonstrated similar results in his retrospective study of eighteen living related liver transplants for Wilson’s disease [37]. Among these eighteen patients, seven had mild to moderate neurological involvement. All showed improvement of their symptoms after surgery, but also demonstrated a slightly lower survival rate. The follow up time in this study ranged from 2 to 32 months.

Two latest papers by Poujois et al [39] and Ferrarese et al [40] specifically looked at the outcomes of Wilson’s disease patients transplanted for neurological indications. Both articles recommended very careful approach to patients selection for the liver transplant surgery and indicated limited benefit of this procedure to improve neuropsychiatric symptoms or signs of the disease.

The authors would like to thank the patient’s family for supporting us in sharing this case report.

All authors participated in manuscript creation, review process, and revisions.