Background: Estradiol 17-beta (E2) enhances the function and survival of pancreatic beta-cells, but its clinical use has been questioned due to concerns regarding oncogenic potential and feminizing effects in males. The G-protein coupled estrogen receptor (GPER), expressed in pancreatic islets, exhibits estrogenic beta-cell protective effects without the feminizing effects of the nuclear ERs. Here, we examine the outcome of selective activation of the three estrogen receptors ERα, ERβ, and GPER on replication in human pancreatic islets and the INS1-E rodent β-cell line under hyperglycemic conditions, such as occur in diabetes mellitus.

Methods: Pancreatic islets from nine human donors and INS1-E cells were grown at glucose concentrations of 11mM and 25mM and examined for DNA synthesis using 3[H]-thymidine incorporation after 24 hour treatment with E2, specific agonists for ERα, ERβ, and GPER (10nM PPT, 10nM DPN, and 100nM G1, respectively), and antagonists for ERα and ERβ (100nM MMP and 150nM PTHPP, respectively). Expression of the three ERs was examined by qRT-PCR.

Results: In human islets at 11mM glucose, agonists to ERα and GPER induced a significant approximate twofold increase in 3[H]-thymidine incorporation (p < 0.01), while the ERβ agonist DPN enhanced proliferation by approximately 50%, which was not significant. However, only the GPER agonist G1 retained its proliferative effect (p < 0.001) while under still higher glucose concentrations (25mM). Concurrently, expression of ERα and ERβ but not of GPER was reduced by approximately 15% at 25mM glucose (p < 0.05). In INS1-E cells, all ER agonists enhanced 3[H]-thymidine incorporation by two- to threefold under 11mM glucose, but at 25mM glucose only the ERα-specific agonist elicited a similar response (p < 0.001). Concordantly, expression of ERβ and GPER but not of ERα was reduced by approximately 50% at 25mM glucose (p < 0.001). E2 enhanced static insulin secretion by 1.2-fold in human islets and by 1.8-fold in INS1-E cells (p < 0.05).

Conclusions: These findings suggest that GPER may comprise an attractive target in the therapy of human diabetes and point to the phenomenon of species specificity regarding effects of glucose on estrogen receptor subtype expression and proliferative activity. 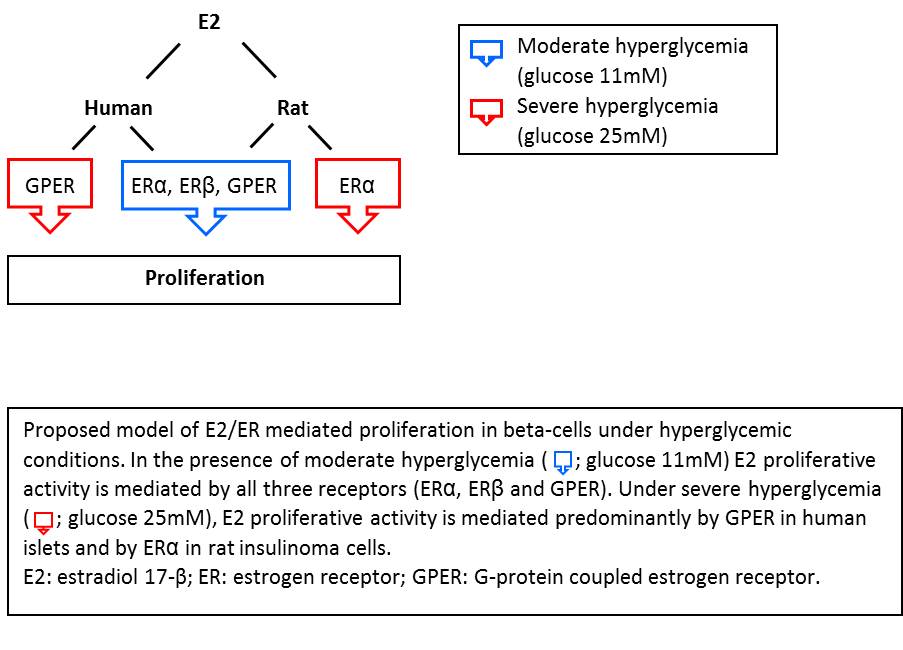 Diabetes mellitus types 1 and 2 are characterized by loss of functional beta-cell mass. Estradiol 17-beta (E2), the most potent female sex hormone, has been shown to exert diverse beta-cell protective effects. E2 enhances insulin secretion, protects beta-cells from apoptosis, increases beta-cell mass, and improves transplantation of human islets into diabetic nude mice [1,2,3]. E2 has also been shown to delay autoimmune diabetes through promotion of immune tolerance [4]. Thus far, these attributes have not translated into clinical practice due to concerns related to the feminizing and oncogenic effects of E2 on reproductive tissues.

While substantial evidence exists with regard to GPER protective effects in rodent beta-cells/islets, relatively little is known about GPER in human islets. Kumar et al. [8] demonstrated that GPER is expressed in all three islet cell types (i.e., insulin, glucagon, and somatostatin-secreting cells), with higher expression in female than male islets, which parallels similar findings in mice [9]. GPER expression did not differ between diabetic and non-diabetic or pre- and post-menopausal women. Stimulation of GPER with the G1 agonist conferred anti-diabetic effects through prevention of cytokine-induced apoptosis, enhanced glucose-stimulated insulin secretion, and reduced glucagon and somatostatin secretion [6,8].

The rat pancreatic insulinoma cell line INS-1E was kindly provided by Michael Walker (Department of Biological Chemistry, Weizmann Institute, Israel) with permission from Dr. Wolheim (University of Geneva). Cells were cultured in RPMI according to standard protocol, treated as described above, and additionally treated with the ERα antagonist MPP at 10-7M and the ERβ antagonist PTHPP at 15x10-8 M (Tocris, Bristol) [11].

Proliferation was evaluated by 3 [H]-thymidine incorporation as previously described [10].

GSIS in INS1-E cells was performed according to previously published protocols [12]. In short, following 24h incubation with E2, 30nM cells were washed twice with glucose-free Krebs-Ringer Bicarbonate buffer (KRB), preincubated for 1 hour at 37°C in 500 µL glucose-free KRB, and then incubated for 2h in 500 µL KRB under low (2.8 mM) and high (16.7 mM) glucose. After 2 hours, media was collected and samples were assessed for insulin concentration. In human islets, insulin was measured at the baseline and after 1h, 4h, and 24h treatment with 30nM E2 at 11mM glucose. Insulin was detected by an electro chemiluminescence immunoassay using the Cobas e411 (Roche Diagnostics, Mannheim, Germany). Data were normalized to cell number in INS1-E and protein content in human islets, and presented as fold changes of the control.

Results are presented as mean ± SEM of at least three independent repeats in triplicates unless otherwise stated. Data were analyzed by SPSS25 using the Student’s t test or ANOVA for multivariate analysis. Thymidine incorporation in human islets was analyzed with the Kruskal–Wallis test (pairwise comparison), and the significance level was adjusted for multiple comparisons by the Bonferroni method. A p < 0.05 was considered statistically significant.

This research was approved by the Institutional Review Board of the Tel-Aviv Sourasky Medical Center, Helsinky approval number 459-14-TLV. 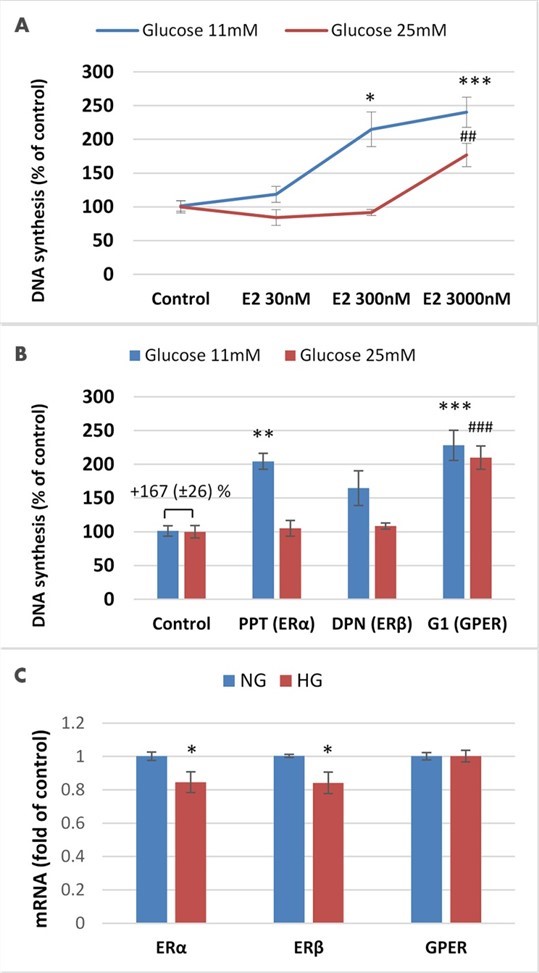 We next examined the expression profile of the three estrogen receptors under growth conditions of 11mM and 25mM glucose for 24 hours. As depicted in Figure 1C, expression of ERα and ERβ was reduced by approximately 15% (p < 0.05), while expression of GPER was unchanged.

The functionality of human islets treated with E2 was assessed by the measurement of insulin secretion under static incubation. Human islets were incubated with 30nM E2 at 11mM glucose, and insulin concentration was determined after 1h, 4h, and 24h. A peak of approximately a 1.2-fold increase (p < 0.05) in insulin concentration was seen at 4h, with a return to the baseline at 24h (Figure S1).

INS1-E cells were treated with E2 (30nM) and with agonists for the three ERs, including ERα (10nM PPT), ERβ (10nM DPN), and GPER (100nM G1), at glucose concentrations of 11mM and 25mM (Figure 2A). At 11mM glucose, E2 and all three ER agonists induced an approximately threefold increase in 3[H]-thymidine incorporation (***p < 0.001). At a glucose concentration of 25mM, basal proliferation increased approximately 2.8-fold, however, only the ERα agonist PPT elicited an additional response, increasing DNA synthesis by approximately 2.5-fold (p < 0.001). Stimulation of ERβ and GPER did not induce proliferation. Stimulation with E2 enhanced proliferation by approximately 1.3-fold at 25mM glucose (p < 0.05), but this effect was abrogated upon addition of the ERα antagonist MMP (100nM; Figure S2). Addition of the ERβ antagonist PTHPP (150nM) did not affect E2-mediated DNA synthesis, supporting that ERα plays a dominant role in high glucose environments (Figure S2).

Expression of the three estrogen receptors under high glucose demonstrated a different profile than that seen in human islets. Severe hyperglycemia (25mM glucose) led to a significant reduction in mRNA of ERβ and GPER by approximately 50% (***p < 0.001), while expression of ERα was not reduced. This was in line with the retained effect observed of the ERα agonist PPT on proliferation under severe hyperglycemia. 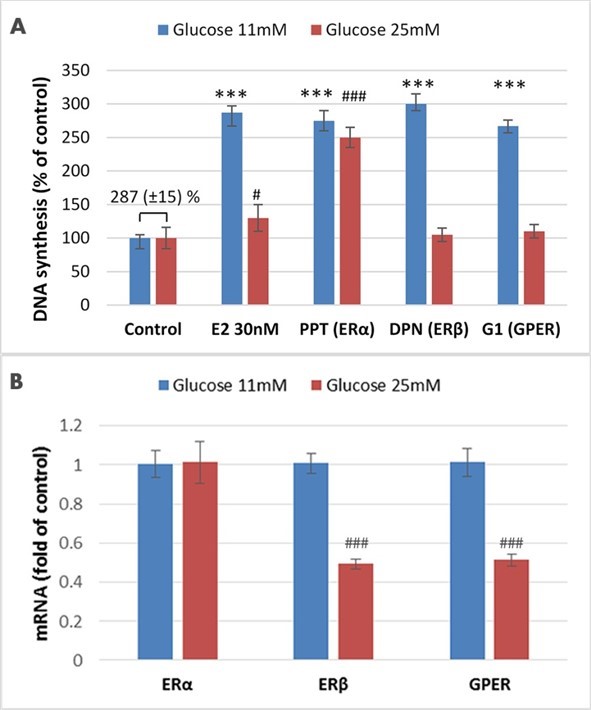 E2, through its three cognate receptors, has been shown to enhance beta-cell function and viability, but its ability to promote beta-cell replication, especially in humans, is still controversial. GPER, the membrane bound estrogen receptor, has recently come into focus as a potential pharmacologic target, conveying favorable E2 metabolic effects while evading ERα- and ERβ-mediated reproductive effects [13].

GPER has been implicated in the expansion of beta-cell mass during pregnancy in rodents through the downregulation of miR-338-3p. This effect, however, was not repeated in vitro in human beta-cells [14]. GPER, independent of ERα and ERβ, has been shown to bestow protective metabolic effects in multiple tissues involved in diabetic complications: CVS, renal, adipose, immune, and neuronal cells (reviewed in [15]). However, there is evidence that GPER may promote breast cancer progression in certain settings [13]. Still, tamoxifen, which is currently recognized as a GPER agonist [16], is broadly used as first-line treatment for human breast cancer. While concerns could be raised that the proliferative estrogenic effects in the pancreas might affect the exocrine pancreas as well, the limited clinical and epidemiological information accrued thus far does not support this possibility [17,18,19].

Ongoing attempts aimed at translating the beneficial effects of E2 into therapeutically safe targets for diabetes are currently in progress [20]. Here, we report for the first time to our knowledge that hyperglycemia affects the proliferative activity and expression of estrogen receptor subtypes in human islets, and that this phenomenon is species specific, lending support to the concept of GPER as a therapeutic target in humans. The experiments in human islets are limited by the small number of specimens, which does not allow for reliably extracting potential sex-specific effects.  Our findings should be extended to a larger number of donors and refined by the use of additional estrogenic and estrogen-mimetic agonists and antagonists. Additionally, antagonizing GPER and combining agonists and antagonists of the different receptors should be explored to test potential interactions between the individual receptors, which may also play a role in the net effect of E2 on beta-cell proliferation. Further studies are needed to decipher the exact mechanisms by which hyperglycemia affects ER activity and expression, as well as whether it is influenced by sex, in order to promote E2-based therapies. Figure S2 E2 mediated proliferation in INS1-E upon high glucose is abrogated by ERα antagonism. INS1-E cells were treated for 24h with E2 30nM with or without antagonists to ERα (MPP) and ERβ (PTHPP) in glucose 25mM and measured for proliferation as percent of control by 3[H] -thymidine incorporation assay. Results represent mean ± SEM (n = 4 in triplicates). #p <0.05 for the comparison with control values.