Background: We performed a liver transplant (LT) with a graft from a 52-year-old donor of blood group O who was HCV viremic. The recipient was a 52-year-old male with blood group A, HCV-related cirrhosis and hepatocellular carcinoma. Methods: A liver biopsy performed on post-LT day 9 revealed acute T-cell-mediated rejection and the patient received three 1.0-g boluses of methylprednisolone. On day 9, the hemoglobin level dropped and the direct antiglobulin test became positive. Passenger lymphocyte syndrome (PLS) with immune hemolysis was diagnosed. Plasma exchange with intravenous immunoglobulins and rituximab were used to remove circulating antibodies. Despite this aggressive strategy, due to the pattern of cholangitis lenta, the patient underwent re-LT on day 40. Results: The immune hemolytic anemia was related to the blood-group compatible but non-identical LT, suggesting a transfer of functionally active donor B cells, also known as PLS. Intrahepatic lymphocytes are not removed from the liver tissue by pre-LT perfusion, and engraftment of lymphocytes is facilitated by a higher lymphoid tissue relative mass within the graft. In particular, the liver of our HCV-positive donor was rich in lymphoid follicles, one of the most characteristic features of chronic hepatitis C. Furthermore, liver-associated lymphocytes located in the sinusoids and in the portal tracts, predominantly of T-type, may have increased the immunogenicity of our graft. Conclusions: Our case could be a proof of concept that transplanting a liver graft with chronic hepatitis C in ABO compatible but non-identical recipient may increase the risk of graft versus recipient and recipient versus graft immune-mediated reactions.

Hepatitis C viremic donors represent a precious resource to reduce the discrepancy between transplant candidates and available organs. As of current day, only 16.9% of hepatitis C virus (HCV)-positive cirrhotic patients in the U.S. receive an organ from a HCV-positive donor [1].

The recipient, who signed an informed consent, was a 52-year old male with blood group A Rh+ (with negative direct antiglobulin test), HCV-related cirrhosis (genotype 1b, relapser to sofosbuvir/ledipasvir), and radiological Milan-in hepatocellular carcinoma. At LT, the Model for End-stage Liver Disease score was 8, and HCV RNA was 623,149 IU/mL. Liver explant pathology identified trifocal Milan-out hepatocellular carcinoma with microvascular invasion, grade IV according to Edmondson and Steiner classification.

The panel-reactive antibody rate was 0%, and crossmatches were negative for T and B cells. Human Leukocyte Antigen (HLA) typing showed six antigen mismatches, and the donor was heterozygous at all loci. 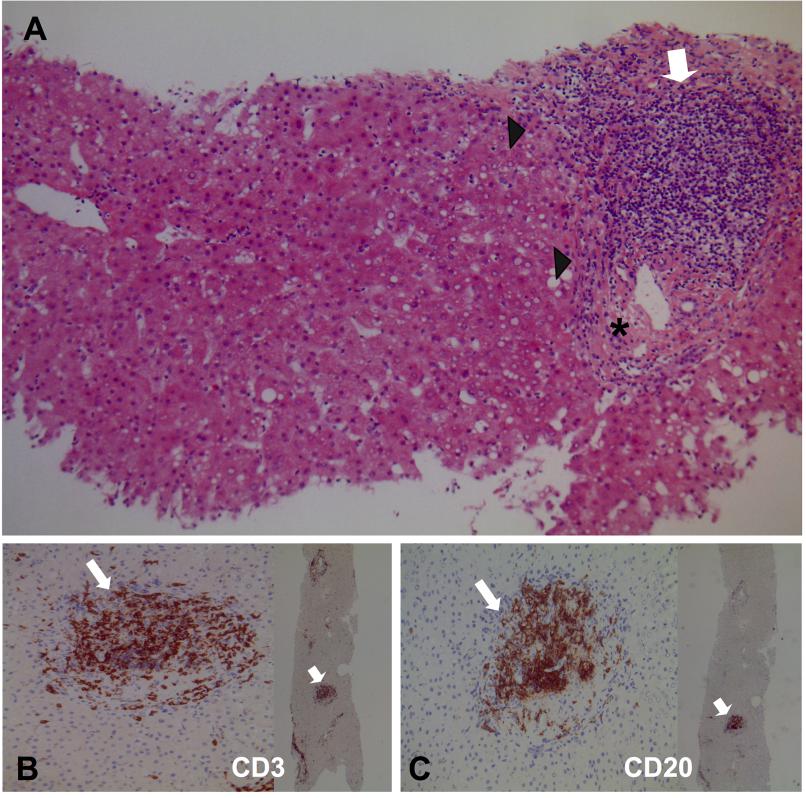 Cold ischemia time was 491 minutes and end-to-end biliary anastomosis with T-tube was performed. During the transplant he received 3 red blood cell units of type A Rh+. 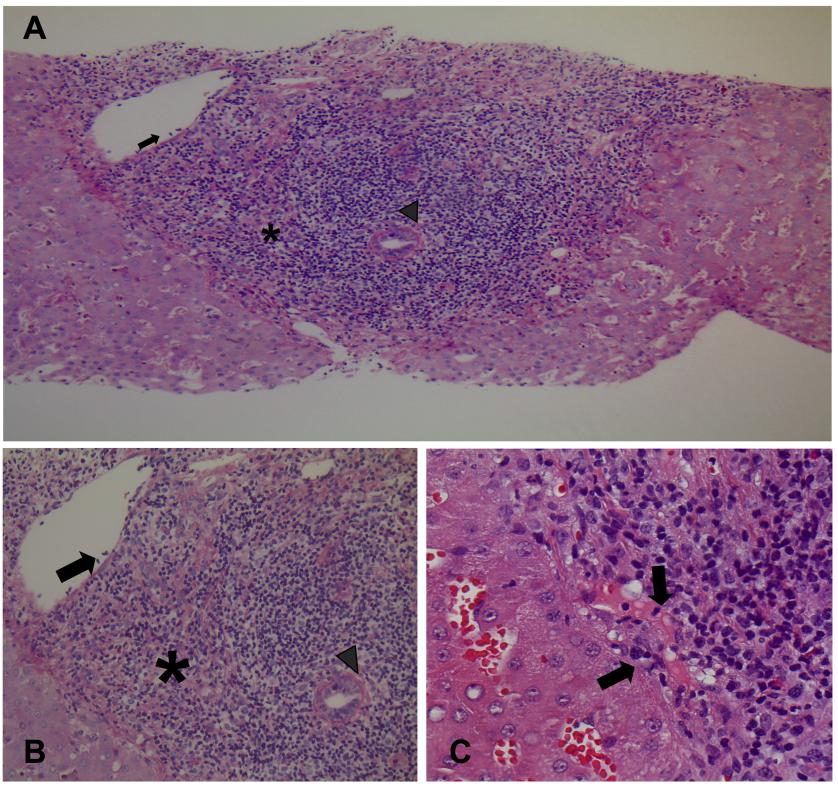 On day 9, the hemoglobin level dropped to 7.6 g/dL from 10.1 g/dL in the absence of significant blood loss, and 4 red blood cell units (2 type A Rh+ and 2 type O Rh+) were transfused. On day 10, the peak bilirubin level was 64.6 mg/dL (half indirect bilirubin), lactate dehydrogenase was 2621 IU/L, and haptoglobin decreased. The direct antiglobulin test became strongly positive for IgG and C3d and serum, and eluate prepared from red blood cells showed the presence of anti-A antibodies (Table 1). Passenger lymphocyte syndrome (PLS) with immune hemolysis was diagnosed [3]. The nadir hemoglobin level was 7.2 g/dL on post-operative day 11, and 6 red blood cell units (O Rh+) were transfused between post-LT days 10 and 14 to maintain a hemoglobin level around 9.0 g/dL.

Before LT, donor-specific antibodies (DSA) were negative. On day 10, the patient had circulating de novo DSA directed against class I HLA antigen (anti-B8, detected by Luminex, mean fluorescence intensity 8000); this suggests a possible antibody-mediated component of rejection [2], even if the liver C4d immunostaining was negative.

Despite this aggressive management strategy, which successfully reduced the serum immune hemolysis product concentration and prevented renal and multi-organ failure, total bilirubin stabilized around 15.0 mg/dL on day 15, and liver biopsies on days 21, 31, and 40 showed severe ductular cholestasis in the absence of signs of persistent rejection. Due to the pattern of cholangitis lenta, the patient was listed for re-LT with a Model for End-Stage Liver Disease score of 20. Re-LT was successfully performed on day 40 with a virus-free liver graft from an ABO-identical donor. Liver explant pathology showed long standing cholangitis without rejection.

From a virological point of view, the patient received sofosbuvir (400 mg/day) with velpatasvir (100 mg/day) plus ribavirin (weight-based) for 24 weeks starting on the day of the first LT. Ribavirin was discontinued for 7 days during immune hemolysis. The patient reached a sustained virological response at week 24 after the end of therapy.

From the same donor, one kidney was transplanted into a HCV-viremic ABO-identical recipient, and the renal transplant was uneventful from an immunological point of view.

From October 2002 to December 2017, among the 1,782 adult first liver transplants we performed, 50 blood group A patients received a liver from a blood group O donor. The rate of steroid-treated early T-cell-mediated rejection was 16% (8/50). It is worth noting that in addition to the case just described, only one other patient who received a viremic liver (HBsAg positive, Ishak score: grading 3/18 and staging 1/6) developed PLS, T-cell mediated rejection, and DSA and was successfully treated with steroids, thymoglobulin, and rituximab in the first month after LT.

The immune hemolytic anemia, which occurred in our patient, was related to the blood-group compatible but non-identical LT, suggesting a transfer of functionally active donor B cells, also known as PLS [3]. PLS is a type of graft-versus-host disease, where donor immunocompetent memory B lymphocytes escape from immune surveillance of the immunosuppressed recipient and are stimulated to produce antibodies against red blood cell antigens, causing hemolysis. In fact, our recipient developed de novo anti-A antibodies on day 9 after LT. Different to what happens with peripheral blood cells, intrahepatic lymphocytes are not removed from the liver tissue by pre-LT perfusion, and engraftment of viable lymphocytes is facilitated by a higher lymphoid tissue relative mass within the graft [5].

In particular, the liver of our HCV-positive donor was rich in lymphoid follicles close to the intrahepatic portal areas, mainly consisting of B cells, which represent one of the most characteristic features of the histopathological pattern of chronic hepatitis C [6,7].

A higher risk of hemolysis (up to 44%) has been described after group O to A LTs (3), and until now, no data have been reported with HCV or HBV viremic donors.

A recent retrospective study at a transplant Center in Spain detected 12 PLS in a total of 1,217 LTs, and 10 patients out of 56 LTs with ABO-compatible but non-identical, developed PLS (17.9%) [8]. In a prospective analysis of 11 ABO or Rh D mismatched LTs, ElAnsary et al. found 2 PLS with antibodies against ABO or Rh D in the serum or eluate [9].

Management strategies for PLS are anecdotal and are described only in single case reports and small series [3,4,8,9,10]. Therapeutic interventions include blood cell transfusion with donor compatible units during surgery and after LT, use of corticosteroids, plasmapheresis or red cell exchange, intravenous immunoglobulins, monoclonal antibodies, such as rituximab, or even splenectomy [3,4,8,9,10].

In addition to the immune hemolysis, our patient also developed a reaction against the graft. Liver-associated lymphocytes located in the sinusoids and in the portal tracts, predominantly of T-type, may have increased the immunogenicity of our graft. According to animal models, allogeneic leukocytes stimulate the alloresponse of the recipient, and memory T-cells produce gamma interferon, contributing to the induction of adhesion molecules and triggering an acute graft rejection [2,5]. On the other hand, the T-cell mediated rejection, in association with hepatitis C infection, may have upregulated the microvascular HLA expression, thereby increasing the DSA target antigen density and providing a histological picture of de novo antibody-mediated rejection, which is unusual in ABO-compatible LT [2,11,12,13]. Immune-mediated hemolysis may have also contributed to impair surveillance mechanisms for liver allograft antibody-mediated rejection resistance [2,14,15].

The debate is still ongoing about the role of HLA matching between the LT donor and recipient in the genesis of acute rejection, and there are no current recommendations regarding its routine use in matching liver grafts [16]. Increasing the number of mismatches is associated with increased risk of acute rejection, although graft survival rates are similar [17]. In contrast, Muro et al. [18] analysed data from 342 LTs and reported that matching at HLA-A locus increased the risk of graft failure.

In conclusion, our case could be a proof of concept that transplanting a liver graft with chronic hepatitis C in ABO compatible but non-identical recipient may increase the risk of graft versus recipient and recipient versus graft immune-mediated reactions. Such risk is most likely related to the mass of lymphocytes transplanted with the HCV-infected graft compared with virus-free grafts.

In the current era of safe and effective direct-acting antivirals, prospective multicenter research protocols are urgently needed to transplant HCV viremic organs into non viremic-recipients [1], From our paper, it can be suggested that an ABO-identical match may be a better choice in this specific donor subset.

All listed Authors participated meaningfully in the paper and they have seen and approved the final manuscript.

The authors did not receive any grant or financial support for this work.

GMS is an Advisory Board member for AbbVie, Gilead and MSD. The other Authors of this manuscript have no conflicts of interest to disclose.