Recent Progress in Nutrition is an international peer-reviewed Open Access journal published quarterly online by LIDSEN Publishing Inc. This periodical is devoted to publishing high-quality papers that describe the most significant and cutting-edge research in all areas of nutritional sciences. Its aim is to provide timely, authoritative introductions to current thinking, developments and research in carefully selected topics. Also, it aims to enhance the international exchange of scientific activities in nutritional science and human health.

Recent Progress in Nutrition publishes high quality intervention and observational studies in nutrition. High quality systematic reviews and meta-analyses are also welcome as are pilot studies with preliminary data and hypotheses generating studies. Emphasis is placed on understanding the relationship between nutrition and health and of the role of dietary patterns in health and disease.

Special Issue: Role of Diets, Vitamins, and Minerals in Cancers and Various Diseases

Immune checkpoints have been aggressively investigated for anti-cancer immunotherapy. The power of microbiota on the outcome of this immunotherapy has attracted much attention. For example, intestinal microorganisms play a key role in the effectiveness of programmed cell death 1 (PD1) and cytotoxic T lymphocyte-associated antigen 4 (CTLA4) blockade. Additionally, short-chain fatty acids produced in the gut may modulate anti-CTLA4 and anti-PD1 stimulated immune responses and their anti-tumor efficacy. Enhancing the anti-tumor effects of CTLA4 blockade depends on specific Bacteroides sp. of the gut microbiota, suggesting novel approaches to improve such immunotherapies. However, the molecular mechanism of the immune-potentiation remains largely unknown. Changes in the microbiota are influenced by dietary and environmental factors. Here, we have suggested the molecular mechanism of action regarding the interplay between gut microbiota and the anti-cancer immune system with APRO family proteins, which might contribute to innovative cancer therapy in the future.

Cancer-therapeutics have advanced greatly with targeted immunological approaches due to the use of immune checkpoint antibodies, which is a popular method of immunotherapy against cancers [1]. The immunotherapy via the association of several molecules such as the programmed cell death protein 1 (PD1) receptor, programmed cell death ligand 1 (PDL1), or cytotoxic T-lymphocyte associated protein 4 (CTLA4) has shown positive effects on both solid and hematological malignancies and is involved in the activation of effector T cells and their anti-tumor activity [1]. However, even such immunotherapies frequently fail to regulate malignancies in a significant proportion of patients. Despite advances in these innovative immune treatments, cancers are still the major cause of mortality globally. The relationship between the immune system and the host gut microbiota can determine the responses to cancer immunotherapy [2,3]. Modulating the gut microbiome can also optimize therapeutic outcomes by blocking immune checkpoints. For example, it is crucial to determine the relationship between gut microbiota and the immunomodulatory effects of CTLA4 blockade [4] (Figure 1). The anti-tumor effects of CTLA4 blockade depend on specific Bacteroides sp., including B. thetaiotaomicron and/or B. fragilis [5]. Tumors in antibiotic-treated mice do not respond to CTLA4 blockade suggesting that the effective bacteria probably die due to the antibiotic treatment. This effect-deficiency was overcome by gavage with Bacteroides sp. and/or by transferring specific T cells against B. fragilis [2]. Fecal microbial transplantation in mice also confirmed that treatment with antibodies against PD1 favored the growth of Parabacteroides distasonis and B. vulgatus with anti-cancer properties [6]. This study shows an important role of gut microbiota, including Bacteroides sp., in the immune-stimulatory effects of PD1 or CTLA4 blockade. (Table 1) Additionally, baseline gut microbiota enriched with Faecalibacterium and other Firmicutes has been associated with clinically beneficial responses to ipilimumab, which is an anti-PD1 or anti-PDL1-based therapy in melanoma patients [7]. Faecalibacterium sp. also represents a key feature associated with clinical responses in patients who undergo immune checkpoint therapy. These results are encouraging. However, some studies have explained how the gut microbiota might affect the distant lesion during malignancies. Additionally, avoiding gut dysbiosis during cancer treatment may be required to retain the beneficial bacteria in the host. The depletion of regulatory T-cells (Tregs) enhances the anti-tumor effect of CTLA4 blockade [8]. Therefore, the mechanism to regulate the number of Tregs should be further investigated to determine the effectiveness of the gut microbiota in future studies. 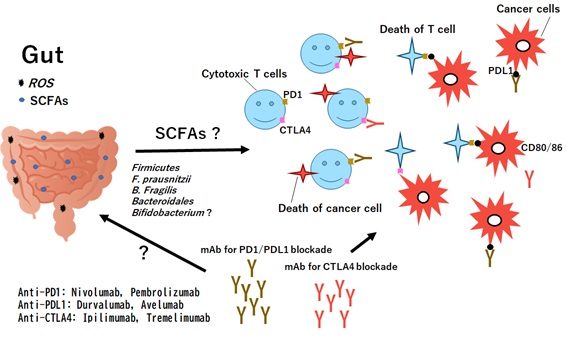 Table 1 The microbial species that may enhance the effect of CTLA-4 or PD-1 blockade.

Table 1 The microbial species that may enhance the effect of CTLA-4 or PD-1 blockade.

The intestinal epithelium maintains homeostasis and the health of the host via the immune system [9]. Therefore, the gut microbiota has been studied extensively for disease prediction and/or prevention. Perturbation of symbiosis might cause chronic inflammatory and/or autoimmune pathogenesis [10]. Furthermore, dysbiosis can enhance the signal of harmful microbiota, which often produce dangerous metabolites leading to maladaptive responses [11]. However, certain genera of microbiota might have a beneficial effect on immune responses [12]. The term microbiota refers to a community of commensal and/or pathogenic microorganisms that can colonize various regions within the body, including the oral cavity, intestinal tract, respiratory system, skin, etc. These populations involve trillions of microbial cells such as bacteria, fungi, and viruses, which influence many homeostatic processes, such as the synthesis of vitamins, energy metabolism, fat storage, and regulation of immune responses [13]. Some bacterial groups can produce valuable metabolites, including short-chain fatty acids (SCFAs) such as acetate, propionate, and butyrate [14]. The SCFAs may provide energy to intestinal epithelial cells [15]. Additionally, SCFAs also perform important functions in immune cells, such as maintaining homeostasis and/or the health of the host [16]. For example, butyrate exerts systemic anti-inflammatory effects by affecting immune cell proliferation, migration, and cytokine expression, which are associated with immunomodulatory capacities by inducing Treg cells [17]. Firmicutes and F. prausnitzii, often found in the gut, are known for their butyrate-producing capabilities [17]. The abundance of butyrate-producing bacteria is significantly lower in patients with colorectal cancers [18]. A relationship between the composition of the gut microbiota and the response to ipilimumab via the microbiota-derived SCFAs was found [19] (Figure 1). Anti-CTLA-blocking mAb can also induce dysbiosis and might stimulate dendritic cells and specific Th1 cells to recognize for tumor cells via the action of SCFAs [19]. Some SCFAs are associated with clinical outcomes in patients treated with anti-PD1/PDL1 [20]. Some species of bacteria, such as Bifidobacterium, are associated with an increase in the maturation of dendritic cells leading to augmented CD8+ T cell priming and/or accumulation due to PD1/PDL1 blockade by their specific antibodies [7,21,22]. On the contrary, high systemic levels of butyrate and/or propionate can limit the anti-tumor activity. For example, high blood butyrate and propionate levels are associated with resistance to CTLA4 blockade and the production of a higher amount of Tregs [19]. SCFAs function via specific receptors such as GPR41, GPR43, and GPR109A expressed on immune cells [23]. However, the molecular mechanism through which SCFAs contribute to immune-potentiation remains largely unknown. The identification of a definite pathway responsible for SCFA-associated immunomodulatory effects could represent a paradigm that might allow the discovery of targets to substantially improve the effectiveness of immune checkpoint therapy. Even at distant sites in the body, anti-cancer responses due to immune checkpoint therapy could be influenced by the small molecular SCFAs [24]. Diet can effectively determine the integrity of the gut microbiota [25]. Therefore, dietary factors can determine the health or disease state and might be a risk factor for diseases or could be used for therapy against diseases. The characterization of dietary factors for immune checkpoint therapy is currently unsatisfactory.

The antiproliferative (APRO) protein family [26] is involved in diverse human diseases, including cancer, suggesting that APRO members are involved in pathological or carcinogenic processes such as cell proliferation, apoptosis, autophagy, and other cellular functions as tumor suppressors. Additionally, these proteins have been associated with various physiological processes in the cell, including cell division, DNA repair, transcriptional regulation, and messenger RNA (mRNA) stability [27,28]. Significant prognostic effects of the APRO family after cancer therapy have been found in various cancers [29]. The expression of some members of the APRO family differs significantly between cancer and normal tissues [30,31]. Furthermore, some APRO genes, including TOB1, are involved in chronic myelogenous leukemia (CML). APRO genes have a low expression in patients with CML without cytogenetic responses [32]. Similarly, a low expression of TOB1 occurs in resistant patients with CML compared to therapy-responsive patients [32]. This might be related to the TOB1 signaling pathway causing resistance to therapy. Besides affecting cellular differentiation, APRO family proteins may play a dynamic role in maintaining cellular homeostasis during redox stress and/or carcinogenesis. Through genomic profiling of B-cell leukemia and lymphoma, BTG1 was found to suppress tumors [33,34]. Moreover, a decrease in the expression of APRO family proteins is often associated with malignancy and/or poor treatment outcomes in solid tumors. For example, TOB1 and TOB2 are inactivated in various cancers, including solid tumors and/or leukemia [35]. Additionally, a decrease in TOB1 expression is associated with aggressive tumor-like behavior and poor prognosis in stomach cancer [30,31,36]. Recently, the relationship between microRNAs (miRNAs) and APRO expression has attracted considerable attention. For example, miR-21 regulates the BTG2 gene during carcinogenesis [37]. Moreover, miR-32–5p is significantly upregulated in colorectal cancer tissues compared to their levels in the adjacent normal tissues. It regulates the radio-sensitivity, migration, and invasion of colorectal cancer cells by inhibiting and/or decreasing TOB1 expression [38]. By affecting proliferation via the regulation of certain miRNAs, APRO family proteins might play an important role in maintaining homeostasis in normal healthy cells under physiological conditions during carcinogenesis. Growth suppression by adenovirus-mediated TOB1 protein expression in pancreatic cancer suggests an application of APRO proteins for chemotherapy-resistant cancer peritonitis [39]. The relationship between APRO proteins and carcinogenesis in a cell may be similar to the relationship between cytotoxic T cells and cancer cells [40] (Figure 2). Additionally, TOB1 expression in colon epithelium might increase and/or be upregulated by the stimulation of certain gut microbiota [unpublished data, 41, 42]. Thus, gut microbiota might potentiate the effect not only of the “Immune checkpoint therapy” but also of the “Onco-checkpoints” (Figure 2). Probiotic bacteria may be administered for supporting cancer treatment. Identifying such supportive mechanisms may provide a promising strategy for probiotic-based dietary therapies, which may be integrated with cancer therapy to improve the outcomes of the therapy and the quality of life of the patients. However, this has to be demonstrated and should be a part of future research. 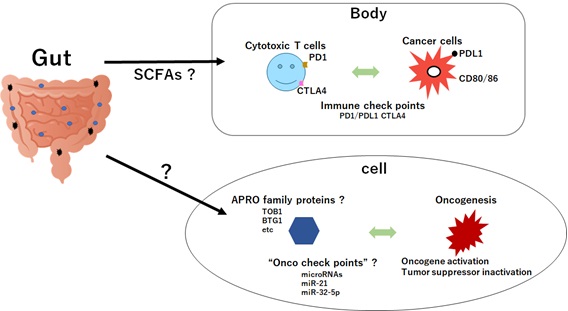 Figure 2 The relationship between cytotoxic T-cells and cancer cells is similar to the relationship of tumor suppressors with the APRO family proteins and oncogenesis. It could be hypothesized that the former is regulated by immune checkpoint molecules, such as PD1/PDL1 and CTLA4, while the latter might be regulated by various miRNAs. The gut commensal microbiota might support both sides of the anti-cancer potential against cancer cells and/or oncogenesis.

Each author (HS, KT, YI, AT, YK, SM) has participated sufficiently in this work of drafting the article and/or revising the article for the important rational content. Then, all authors gave final approval of the version to be submitted.

To receive the table of contents of newly released issues of Recent Progress in Nutrition, add your e-mail address in the box below, and click on subscribe.