Patients with glioblastoma multiforme (GBM) have poor prognosis with an overall survival time of less than twelve months despite aggressive treatment [1]. GBM’s highly variable response to existing therapies coupled with its short survival times [2], underlines the need for additional imaging biomarkers capable of identifying earlier signs of disease progression to augment treatment management and accelerate decision-making. The current imaging standards for detecting and assessing tumour progression in patients with GBM depend heavily on changes in contrast-enhancing abnormalities on brain magnetic resonance imaging (MRI) [3,4]. Contrast enhancement on gadolinium enhanced MRI is based on the immature leaky capillaries in the region of the GBM. Contrast enhancing abnormalities are examined and characterized to estimate prognosis and also to guide management of these malignant brain tumours [5].

Patient selection: Consecutive patients over a 3-year period were identified from our institutional brain tumour database with confirmed diagnosis of GBM on biopsy or resection and their data were retrospectively analyzed. The study was approved by the institutional research ethics board. Patients with the following set of axial images on their first diagnostic MRI, before any medical or surgical treatment, were included in our study: 1) DWI; 2) ADC (apparent diffusion coefficient) maps; 3) axial post gadolinium T1W images; and 4) axial fluid-attenuating inversion recovery (FLAIR) images. Additional information on patients’ demographics as well as clinical, surgical, follow-up, and survival data was obtained from the brain tumour database. Karnofski performance score, which defined the functional status of the patient, was also obtained from the brain tumor database. All procedures performed in studies involving human participants were in accordance with the institutional ethical standards.

The degree of restriction was quantified as the lowest ADC value within each region of restricted diffusion. The degree of restriction was calculated by manually outlining the region of restricted diffusion (using ‘Freeform mark up’ tool) on the slice it was seen. ADC was also measured in the NAWM in the contra-lateral hemisphere using ‘Freeform mark up’ tool with an area of at least 10 mm2. This was used to calculate the normalised ADC (nADC, i.e., ratio of minimum ADC in the tumor to that in contralateral NAWM). The ADC values (in mm2/s) were recorded on a PACS work station and not on an MRI console. These two values have been shown to be comparable and not statistically different [9]. The total volume of enhancing component of the tumor was calculated by manually outlining the abnormality (using ‘Freeform mark up’ tool) on all the slices. The sum of the areas on each slice was multiplied by the slice thickness and the inter-slice gap to get the volume. Volume of tumour, time interval for enhancement to appear, and overall survival of patients from the time of first imaging were recorded. Figure 1 Patient with GBM with heterogeneously enhancing tumor on post-gadolinium T1 axial images (a) showing heterogeneous pattern of diffusion restriction on diffusion weighted images (DWI)(b) and apparent diffusion coefficient (ADC) map (c). Superior to the enhancing lesion, there was no enhancement on poste-gadolinium T1 weighted images (d) but with isolated restricted diffusion on DWI (e) and ADC map (f). On follow up 2.5 months later, enhancement (g) was seen on post-gadolinium T1 axial images, in the same area of isolated restricted diffusion on DWI (h) and ADC map (i).

Statistics- Descriptive statistics were performed. The two group of patients with and without isolated restricted diffusion were compared using Wilcoxon signed-rank test to analyze any significant difference. Kaplan Meier survival statistics were performed in Graph-pad statistical package using Log-rank and Gehan-Breslow-Wilcoxon tests to assess the difference in the survival pattern between the two groups. In comparison to the Log-rank test, the Gehan-Breslow-Wilcoxon test places more weight on deaths at early time points, and hence is more sensitive to the detection of early survival differences.

Table 1 Demographic, imaging, treatment and survival characteristics of the GBM patients with and without isolated restricted diffusion.

Figure 2 Apparent Diffusion Coefficient (ADC in mm2/sec) in the region of isolated restricted diffusion (shown as lesion ADC) compared to that in the normal appearing white matter (NAWM) in the contralateral hemisphere in 40 patients with glioblastoma multiforme.

We had clinical follow up for all patients and the overall survival was significantly longer (p=0.036) in patients with isolated restricted diffusion after index MRI than those without (Table 1). On survival analysis (Figure 3), the Gehan-Breslow-Wilcoxon test showed significant (p=0.006) survival benefit in the early follow-up period reflecting longer survival (median survival of 456 days vs 173 days) in patient with isolated diffusion restriction. However there was no significant difference (p=0.134) in the overall survival in these two groups of patients on Log-rank (Mantel-Cox) test. 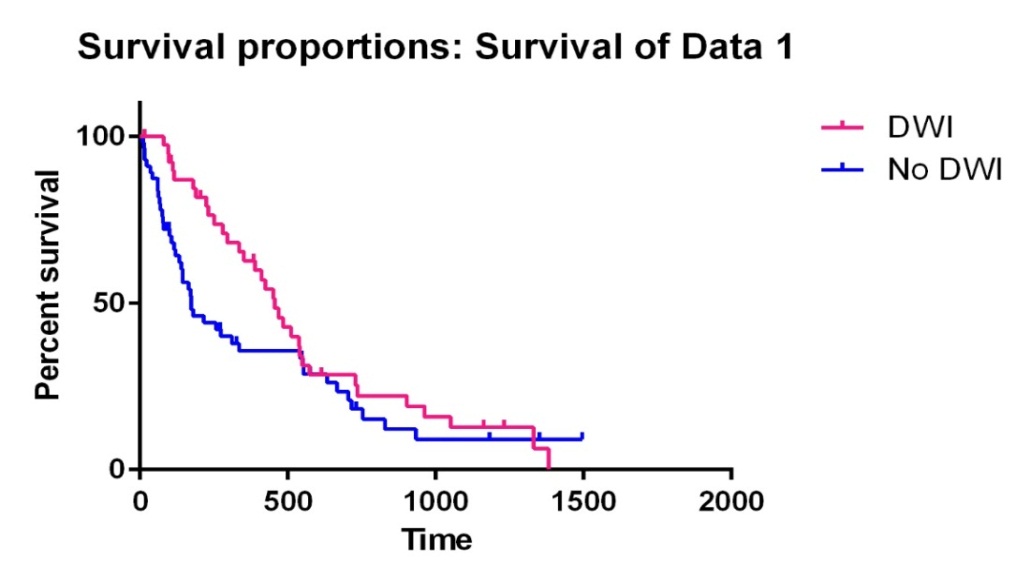 In patients with GBM, the regions of isolated restricted diffusion, on their diagnostic MRI, is likely a focus of tumour, even in the absence of enhancement. This is an important concept to consider since the current definition of a tumour on imaging only includes the contrast enhancing component of lesions (RANO criteria) [10]. Foci of isolated restricted diffusion at the time of imaging could be the focus of recurrent or residual tumor. It should also be noted that these foci of restricted diffusion could be seen long before corresponding contrast enhancement and could be separate from the enhancing component in patients with new or recurrent GBM. Earlier detection of these unrecognized foci of GBM could lead to more timely and suitable treatment that may improve prognosis.

Survival data showed that isolated restricted diffusion was associated with longer short-term survival. We hypothesize that the patients with GBM showing isolated restricted diffusion may have different molecular signatures compared to those without. This hypothesis remains to be tested as we did not have molecular signature available in these patient for analysis. We plan to verify this in a prospective study. The patients with isolated restricted diffusion progressing to enhancement had a trend towards shorter follow up (p= 0.059) compared to those who did not progress to enhancement. This suggested that a shorter follow-up period was not responsible for the lack of corresponding enhancement. This may also suggest that progression to enhancement was a poor prognostic factor in terms of overall survival. However the number of patients in these subgroups was small to reach any meaningful conclusion.

Diffusion imaging is a part of routine brain tumor MRI. Our findings highlighted the added value of isolated restricted diffusion without corresponding enhancement on the diagnostic MRI, in patients with GBM. Recognizing these areas of restricted diffusion may provide a more comprehensive approach to the diagnosis and treatment monitoring of GBM without any additional resources. Moreover, inclusion of isolated restricted diffusion in treatment planning of GBM, both on surgery or subsequent radiotherapy, may result in more predictable patient outcomes. Investigators continue to assess the role of isolated restricted diffusion as a predictor of GBM progression and prognosis [11]. Recognizing isolated diffusion restriction on post-treatment follow-up MRI may also be useful to gauge treatment efficacy and to identify recurrent or residual foci even in the absence of corresponding enhancement. For example, tumors treated with anti-angiogenic agents (e.g. bevacizumab) have been reported to reduce contrast enhancement, resulting in an overestimation of treatment response on conventional imaging [12]. Nevertheless, this interesting and important imaging phenomenon in GBM still requires rigorous clinical validation, which warrants further studies in larger patient populations.

Limitations: This study was limited in terms of its small number of patients and its retrospective nature. Our study was also limited due to the lack of data on the molecular markers and inconsistent follow up imaging in these patients. However our study generates an important hypothesis in sequential patients that remains to be tested in a larger prospective study. The study was also limited by the missing imaging data points in 14 patients. Of these, 10 patients died and did not have any follow up images. Another 4 patients had follow up images but did not have DWI done on follow up. The 10 patients who died on follow up were censored. The remaining 4 out of the 40 patients (10%) did not have diffusion images on follow up. These patients did not give any information on the length of time for appearance of enhancement. These patients were still included on survival analysis as we had clinical information on survival in all of them.

Isolated restricted diffusion preceded the corresponding enhancement in a subset of patients with GBM and was associated with early survival benefit. Recognition of this important imaging phenomenon in GBM may foster its uptake into routine treatment planning, which may enable more predictable outcomes in the future. Prospective study in larger patient cohort is warranted to confirm our observations.

Adil Bata- collected the data and wrote the first draft.

Namita Sinha- Intellectual contribution to the manuscript and editing the final draft.

The authors report no conflict of interest concerning the materials or methods used in this study or the findings specified in this paper.