Background: The aggressive T-cell acute lymphoblastic leukemia (T-ALL) is one of the frequently occurring malignancies of the thymocytes. T-ALL is observed in 15% and 25% of all new diagnosed ALL cases in children and adults, respectively. Notably, T-ALL has a 3-fold higher incidence in males than in females. In nearly half of T-ALL cases, structural and/or numerical chromosomal abnormalities are detected, which have an important prognostic significance. A well-known genetic subtype of B-ALL, high hyperdiploidy (HeH) (51-65 chromosomes) is associated with good survival and an excellent outcome. The commonly acquired chromosomes in HeH are +4, +6, +10, +14, +17, +18, +21 and +X. However, how chromosomal gains evolve and their roles in ALL, in general, are still far from being understood.

Results: A HeH karyotype including a balanced translocation t(X;5) was detected, which is classified as a de novo childhood cortical-T-ALL case, according to the World Health Organization (WHO) guidelines.

Conclusions: This is the first report of a childhood T-ALL case associated with HeH karyotype. Although the involvement of cytoband Xq26 in disease-specific rearrangements has already been reported, here, a corresponding aberration was observed for the first time in a male patient, suggesting a gender association, but not limited to this cytogenetic ALL subgroup.

T-cell acute lymphoblastic leukemia (T-ALL) is a highly aggressive malignancy derived from T-cells and is known to present multiple chromosomal abnormalities. It is observed in children as well as in adults as 15% and 25% of the new diagnosed ALL cases, respectively. Interestingly, a 3-fold higher incidence of T-ALL has been observed in males. Compared to the precursor B-ALL, T-ALL is often associated with unfavorable clinical outcomes, such as high white blood cell (WBC) count, central nervous system infiltration, and bulky adenopathy [1,2]. The current intensive therapy that may be combined with hematopoietic stem cell transplantation improves the outcome at a rate of nearly 10% in children with T-ALL [3,4,5,6] but 37% of adult T-ALL patients show relapse, leading to death in due course [7]. Thus, in adult cases, the approach is not much promising.

Most frequently observable chromosomal abnormalities in T-ALL are deletions del (6) (q) and balanced translocation t(10;14). An involvement of the T-cell receptor (TCR) gene, localized in 14q11, in rearrangements such as translocations t(1;14) (p31;q11), t(10;14)(q24;q11), or t(8;14)(q24;q11) are frequently reported. Terminal deletions like del (9) (p21) and del (1) (p32) have also often been repeated [11,17,18,19,20]. Better survival rates have been observed in childhood T-ALL with normal karyotype or with translocation t (10; 11) (q24; q11.2), than in cases with the presence of any derivative chromosome [20]. Nonetheless, cryptic chromosomal aberrations are still a big challenge in the cytogenetic characterization of T-ALL and the most important step for accurate diagnosis is karyotyping. Additionally, new insights into T-ALL pathogenesis may also be derived from new molecular (cyto) genetic data.

Here, we first time report a new case of cortical-T-ALL in a male patient with HeH karyotype including a balanced translocation t (X;5).

The GTG-banding analysis, according to standard procedures [21], was done prior to chemotherapy. At least 20 metaphases derived from unstimulated and cultivated bone marrow cells were studied. Karyotype was described using the International System for Human Cytogenetic Nomenclature (ISCN 2016) [22]. 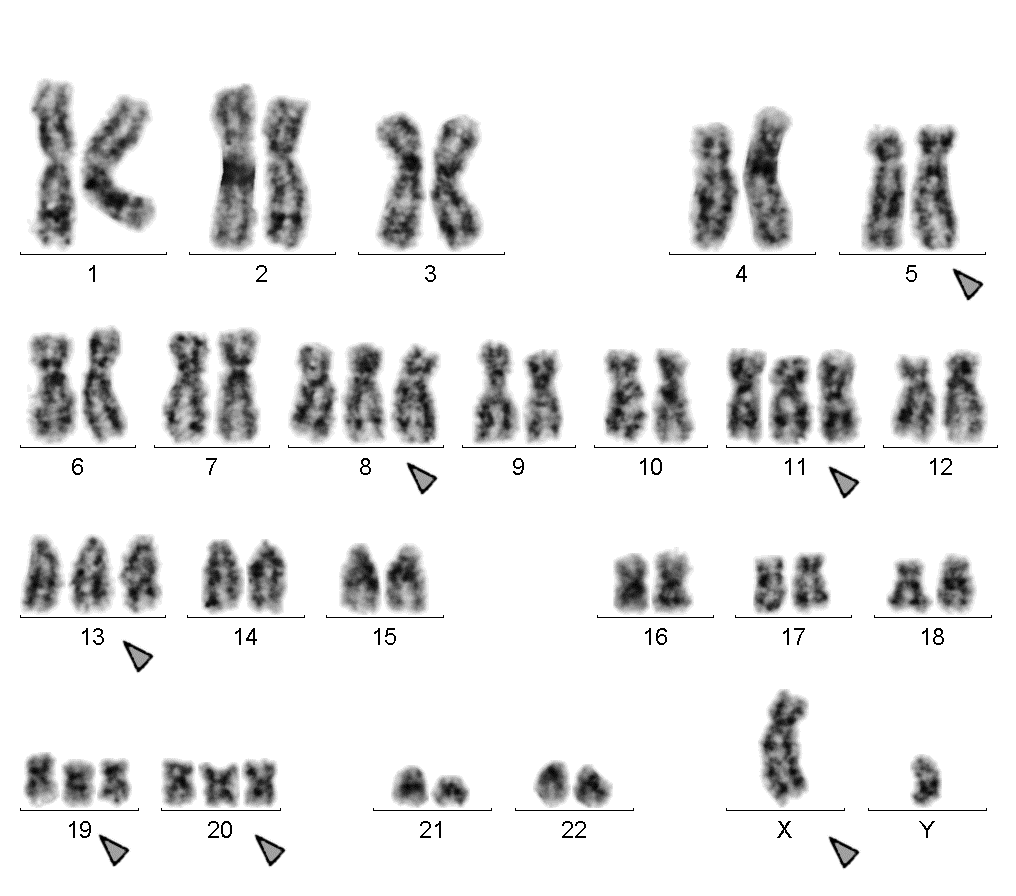 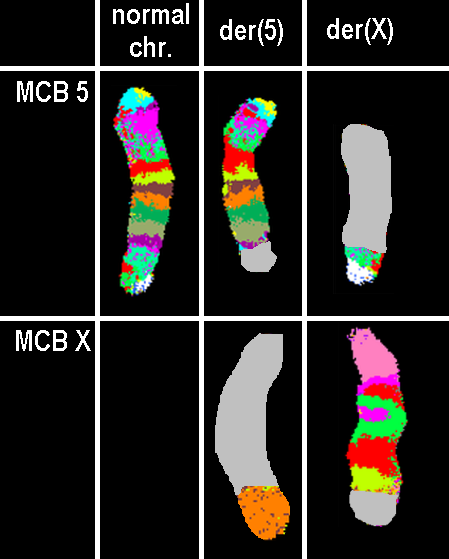 As per the WHO classification, the immunophenotyping of bone marrow specimen characterized this case as Cortical-T-ALL. The blast cell population was positive for CD45dim, CD10, TdT, CD7, CD1a, CD2, CD4, CD8, CD5dim, and cCD3. This cell population was negative for CD19, CD34, HLA-DR, CD33, TCR α/β, TCR γ/δ, and sCD3.

A de novo childhood cortical-T-ALL male patient with HEH karyotype including a balanced translocation t (X;5)(q26;q31.3~q32) was characterized in detail by (molecular) cytogenetics. According to the literature, HeH (>51 chromosomes) is commonly found in B-ALL patients [10–13] and is an uncommon event in T-ALL. To date, approximately 117 ALL cases with HeH have been reported in the Mitelman Database [24]. Trisomy for chromosome 8 has been reported in 36 ALL with HeH cases (see [24]). Also, trisomy of chromosomes 11, 13, 19, and 20 was reported previously in 5, 9, 5 and 11 ALL cases, respectively with HeH [24]. In addition, chromosomal bands such as Xq26 and 5q31 were reported to be involved in chromosomal rearrangements in 16 and 109 cases, respectively [24]. However, translocation t(X;?) including short and/or long arms of these chromosomes has been seen previously only in two B-ALL cases with HeH [24]. Interestingly, while all such reported ALL cases involving Xq26 (16 cases) were in females, the present case was observed in a male patient; the majority of these cases were of B-ALL (7 out 16 cases), four of these cases were of T-ALL, and the remaining cases were unclassified. To the best of our knowledge, this is the first report to observe HeH with translocation t(X;5)(q26;q31.3~q32) in a male T-ALL patient [24].

Univariate analysis revealed moderately strong evidence of heterogeneity in patient’s outcome with respect to the gain of the chromosomes 4, 5, 10, 14, 17, 20, 21, and X [11]. Interestingly, all chromosome acquisitions, apart from chromosome 20, have prognostic significance in pediatric ALL [14,27,28]. On the other hand, adverse prognostic effects even in the presence of ‏ extra chromosome 20 in our case is a novel finding. In HeH, the gain of chromosome 20 is less frequently seen in children (only in 6%), thus, an adverse effect may have been hidden. However, in an adult cohort and in the case of the adolescent reported here, ‏+20 had an extremely poor outcome, which was mainly caused by early relapse [11].

Interestingly, in Ewing’s Sarcoma as well, ‏+20 has been associated with adverse outcomes, where it is present along with the gain of other chromosomes [29]. Overall, the mechanism and consequences for tumor development in terms of simultaneous gain of multiple chromosomes is not yet understood [15-16]. The overexpression of one or more genes on each of the gained chromosomes may potentially be the cause of the disease [16]. This idea is supported by the fact that the accumulation of methotrexate polyglutamate is higher in blast cells of HeH patients when compared to that in non-HeH patients [30] and may thus explain the favorable outcome of pediatric HeH patients [11].

Somatic deletions and other inactivating mutations of the plant homeodomain (PHD)-like finger 6 (PHF6) gene in Xq26.2 has been identified in 16% (14 of 89) of pediatric and in 38% (16 of 42) of adult T-ALL samples. Interestingly, most of them were derived from males [31]. Immunohistochemical analysis showed a complete loss of the PHF6 protein in all T-ALLs with a mutation. Loss of PHF6 was observed in leukemia driven by aberrant expression of the homeobox transcription factor oncogenes TLX1 and TLX3. Altogether this indicates PHF6 as an X-linked tumor suppressor in T-ALL. Also, Kraszewska et al. [32] proposed that PHF6 could be a tumor suppressor gene and that mutations result in loss of its function. This would be consistent with silencing of the PHF6 promoter by DNA methylation in some T-ALL cases.

Overall, prognostic factors have been clearer for patients with B-ALL than for patients with T-ALL. HeH is an established genetic subtype of B-ALL, which is associated with good survival and excellent outcome [10,11,12,13]. Adverse prognosis in T-ALL is accompanied with hyperleukocytosis, enhanced mediastinal mass, male gender, central neural system involvement, and advanced age [8]. Also, T-ALL patients who were CD1a positive in the trial of Medical Research Council (MRC)/Eastern Cooperative Oncology Group (ECOG) had an overall five years survival of 64% (95% CI, 48-80%), which was better than that for CD1a-negative patients [39%(26-52%) in (P=0.01)]. This may possibly be caused by a higher risk of relapse in CD1a-negative patients (50%; 36-65%) in five years, compared to that (23%; 8–38%) in CD1a-positive patients (P = 0.02) [7].

In conclusion, we presented here a de novo case of childhood cortical-T-ALL in a male patient with HeH karyotype, which included a balanced t(X;5)(q26;q31.3~q32), trisomy 20 and CD1a positivity. These may be indicators for poor prognosis in T-ALL with adverse effects and relapse during chemotherapy.

We thank Prof. I. Othman, the Director General of Atomic Energy Commission of SYRIA (AECS) and Dr. N. Mirali, Head of Molecular Biology and Biotechnology Department for their support. This work was supported by the AECS.