2. The Cancer Centre for Children, Australia

Hypodiploidy has a low incidence in childhood acute lymphoblastic leukaemia (ALL). Patients are usually stratified into three subgroups, to allocate the correct treatment according to their ploidy level: high hypodiploidy (40-45 chromosomes), low hypodiploidy (33-39 chromosomes) and near haploidy (23-29 chromosomes). In this paper, a case is presented of near-haploid childhood ALL where fluorescence in situ hybridisation (FISH) provided an insight into the near-haploidy chromosomal aberration initially missed on routine karyotyping due to culture effect and analysis software constraints. FISH primary results followed by further confirmatory studies, inclusive of karyotyping and single nucleotide polymorphism (SNP) microarray, clinically placed the patient in the correct treatment stratification. The patient remained in morphological and cytogenetic remission 12 months after commencing the high risk arm of an international collaborative (*AIEOP-BFM-ALL [Associazione Italiana Ematologia Oncologia Pediatrica–Berlin-Franklin-Munste]) 2009 treatment protocol for children and adolescents with ALL.

Acute lymphoblastic leukaemia (ALL) is the most common type of childhood blood disorder [1], and despite improvements in the outcome of therapy it remains the predominant cause of cancer-related demise in young children [2]. Hypodiploidy, or a chromosomal count of less than 45, is relatively rare and it is found in ~5% of adult and child ALL patients [3]. There are three distinct hypodiploidy subgroups with different genetic and clinical features:

Patients with low hypodiploid ALL can express genetic changes targeting TP53, RB1 and the IKAROS gene family member IKZF2. However, near haploid ALL cases can demonstrate changes within receptor tyrosine kinase- and Ras signalling as well as high incidences of IKZF3 gene alterations [2]. High hypodiploid sub-group (44-45 chromosomes) can present some structural chromosomal rearrangement such as dicentric chromosomes including 9p, 12p or both or other known chromosomal rearrangements (e.g. ETV6-RUNX1 fusion), but do not demonstrate as an unfavourable outcome compared with cases of more severe aneuploidy [7].

According to the Australian New Zealand Clinical Trial Registry (ANZCTR*), the standard/augmented BFM treatment protocol is adapted for children and adolescents with ALL. Hypodiploid subgrouping is crucial in order to stratify patients into the correct risk group for treatment. Cytogenetic studies using such techniques as G-band karyotyping, FISH, chromosome microarray (CMA) including SNP and next generation sequencing (NGS), are essential tools in categorising these patients.

Here we present a case of hypodiploid childhood ALL where FISH was the first tool that provided an insight into the near-haploidy chromosomal aberration. FISH primary results followed by further confirmatory studies, inclusive of karyotyping and microarray, clinically placed the patient in the correct treatment stratification.

A four year old boy presented to the hospital with joint pain, fever, abdominal pain and maculopapular rash. On examination he had no palpable cervical or axillary lymph nodes. Liver and spleen were palpable just below the costal margin. He had a papular rash on his lower limbs and his right ankle was tender to touch. An X-ray of the involved limbs showed no fractures and the bone scan demonstrated polyarthritis involving both elbows, right ankle and some small joints of the right foot. Abdominal ultrasound revealed a small amount of free fluid in the right iliac fossa with several lymph nodes (up to 7mm). The child’s full blood count was normal and the blood film showed reactive lymphocytes, occasional lymphoid cells with large nucleoli and basophilic vacuolated cytoplasm. Bone marrow aspirates contained 70% blasts which were Periodic acid-Schiff (PAS) Stain positive. Flow cytometry showed the blasts to be positive for CD19, CD10 and negative for CD33, CD13 and CD117, consistent with diagnosis of precursor B acute lymphoblastic leukaemia. 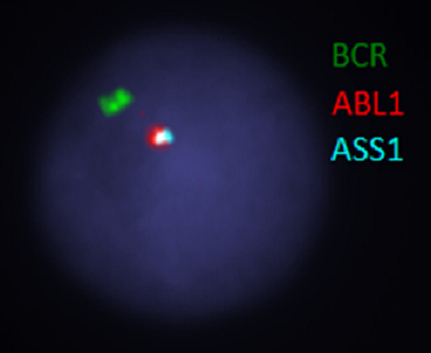 Figure 1 Interphase FISH result for the tri-colour dual fusion BCR(green)-ABL1(red)-ASS1(aqua) probe, showed a single copy of each probe with no evidence of fusion. 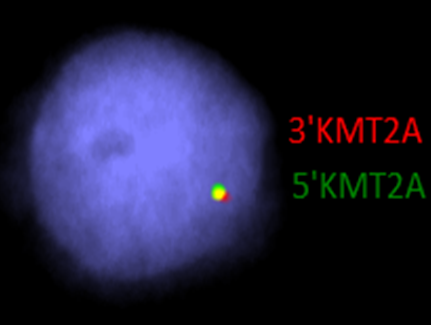 Figure 2 Interphase FISH result for the KMT2A break apart probe. A single connected copy of the KMT2A probe was observed with no evidence of a rearrangement. 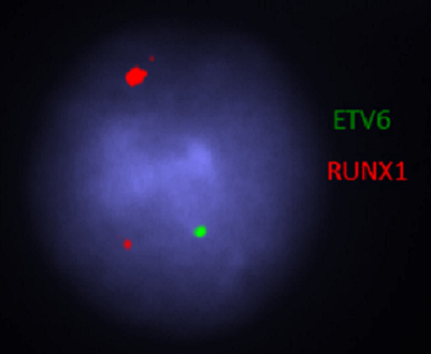 Figure 3 Interphase FISH result for the ETV6-RUNX1 dual colour single fusion–extra signal probe showed a single copy of the ETV6 probe (green) and two copies of the RUNX1 probe (red) with no evidence of a fusion.

Subsequent G-band karyotype analysis showed in 30 metaphase examined, a male karyotype 46, XY. Based on the FISH results that suggested the presence of a hypodiploid clone, additional metaphases were scanned to search for the hypodiploid clone.  In total, four cells with near-haploid chromosome complement were found 27, XY, +8, +10, +21 [4] / 46, XY [30] (Figure 4). The missing chromosomes from the near haploid karyotype were consistent with the monosomy chromosomes found by FISH analysis. 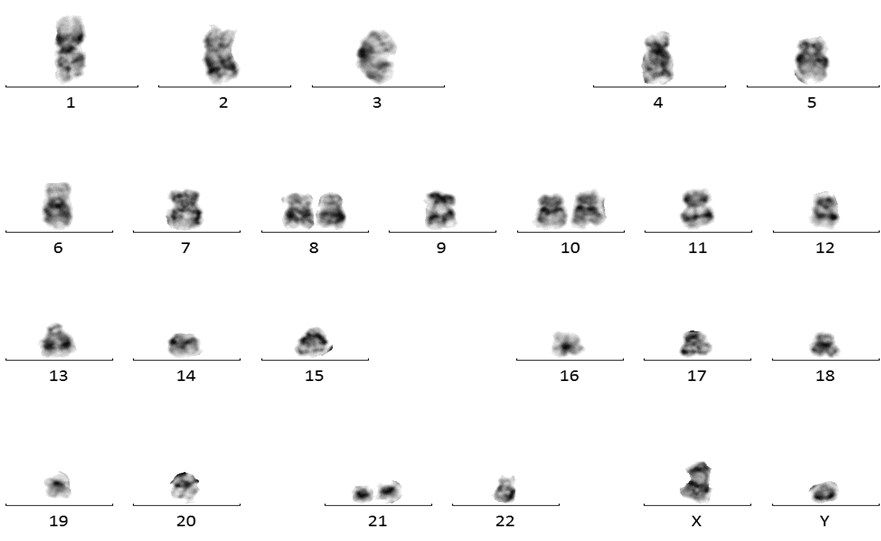 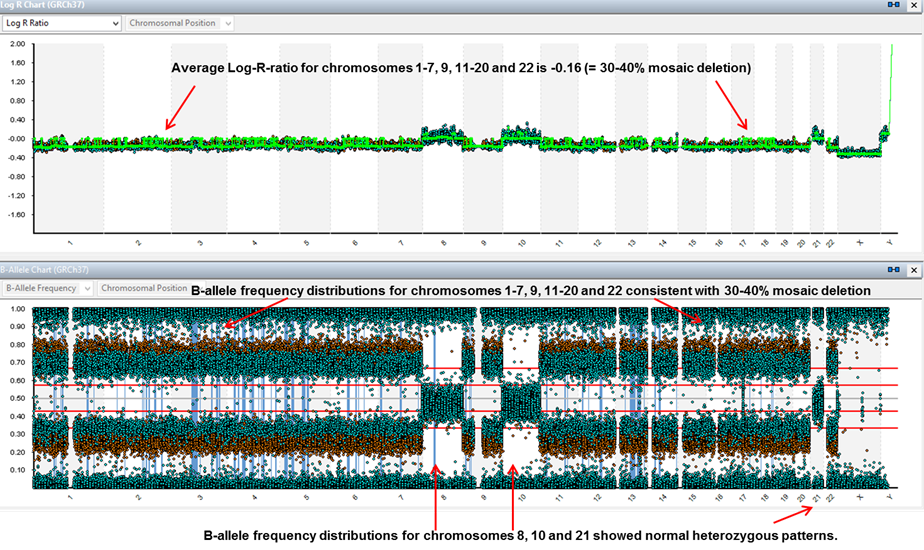 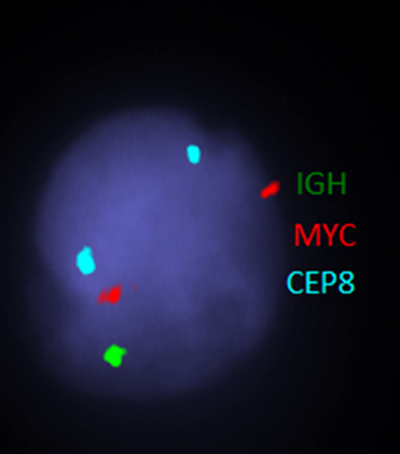 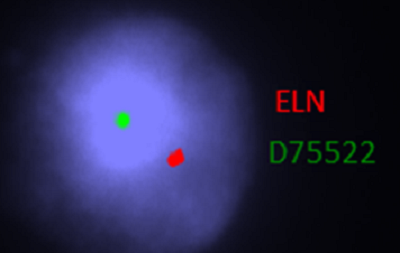 Figure 7 Interphase FISH result for the ELN/D75522 (locus specific) probe showed one copy of each the ELN (red) and D75522 (red) probes, consistent with CMA finding of monosomy 7.

The detection of chromosomal abnormality is important for the diagnosis, treatment, management and prognosis of childhood ALL. FISH, karyotype and SNP microarray testing indicated that the patient in this case study fell within the near-haploid group, with a chromosome count of 27 chromosomes. ALL patients in the sub-group with 23-29 chromosomes represent a minor category with a particularly unfavourable outcome [10]. In near-haploid ALL, retained disomies primarily comprise chromosomes X/Y, 8, 10, 14, 18, and 21, whereas retention of disomies X/Y, 1, 5, 6, 8, 10, 11, 14, 18, 19, 21, and 22 is seen in low hypodiploid ALL [4]. The patient in the present case retained disomy for only chromosomes 8, 10, 21, X and Y and therefore was placed within this sub-group.

FISH detected an abnormal clone in 26.5±1.4% of the cells, whereas the SNP microarray detected ~30%-40% mosaic deletion of the cells affected. FISH could detect loss of certain chromosomes by using locus specific probes within the region of interest (localisation of specific DNA target sequences). These differences suggest that more than one type of investigation is necessary to determine a complete hypodiploidy profile. In the present case, by applying the standard “study IX” B-ALL FISH panel (see the methods’ section), monosomies for chromosomes 9, 11, 12, and 22 were suspected. The CEP4/CEP10 and CEP7/CEP17 probe sets (for chromosomes 4, 7, 10 and 17 centromeres) used to be included in our routine FISH testing to confirm hyperdiploid karyotype. The introduction of SNP microarray testing in our laboratory limited the use of additional FISH workup.

Based on the FISH results, high resolution SNP microarray was performed to investigate the entire genomic profile of the abnormal clone. Mosaic deletions for whole chromosomes 1, 2, 3, 4, 5, 6, 7, 9, 11, 12, 13, 14, 15, 16, 17, 18, 19, 20 and 22 were revealed. Interphase FISH provided the most accurate estimate  for the proportion of abnormal clone (26.5%) as it was performed objectively by scoring interphase cells (with no culture bias), whereas karyotyping only identified four near-haploid metaphases in 34 cells examined (11.7%). Karyotyping can be predisposed to culture bias as the abnormal clone may not divide, therefore analysis of metaphases might provide a biased view of the true proportion of the aberrant clone.  SNP microarray allowed for simultaneous examination of DNA extracted from a large number of heterogeneous cell populations within the bone marrow sample, thus removing the culture bias element from the metaphase chromosome analysis. SNP microarray can also examine the whole genome at a higher resolution than karyotyping and FISH analysis. However, the ability of SNP microarray in the detection of mosaicism may be influenced by probe coverage, the signal to noise ratio, as well as the analysis algorithm of the software. Hence, the percentage of abnormal clone suggested by the Log-R ratio and B-allele frequency distribution are estimated figures based on the expected theoretical values. In the absence of the hypodiploid founded clone (masked hypodiploidy), SNP microarray is the primary test to reveal hypodiploidy based on loss of heterozygosity. Whereas, FISH has limitation of detection in these cases but might provide a suggestion that the genome has doubled because of the tetrasomy of some chromosomes that have retained their disomy.

The automated Metafer MSearch technology used to locate G-banded metaphases failed to identify the abnormal metaphase cell line for karyotyping. This innovative technology uses a specific classifier (object count) and algorithms to detect objects and automatically sort them by quality score, only acquiring metaphases within the pre-defined parameters. Metaphases with chromosome numbers slightly more or less than 46 can be captured with this device, but metaphases with half or double this number are not detected. However, Metafer classifier software training to detect and capture hypodiploid and hyperdiploid cells is also possible. Trained classifiers can demonstrate improved pick up rate of cells from these categories.

The karyotype was not useful in this case, as the abnormal clone was originally missed due to culture bias. Identification of lower levels of mosaicism can be challenging. It has been estimated that analysis of 20 cells (standard for routine chromosome analysis) will detect ~14% mosaicism (in the tissue being studied) with 95% confidence [11]. In this case we have examined 34 cells, then the lower level of mosaicism excluded with 95% of confidence is 9%. However, interphase FISH analysis identified the near-haploid cell line in ~30% of the cells examined, and then accordingly G-banded slides were scanned manually using light microscopy. Metaphases are arduous to obtain from ALL patients, and these abnormal metaphases often show poor chromosome morphology with limited resolution. FISH, on the other hand, does not require cell culture and can be performed on interphase cells. Furthermore, karyotype has limited application to the detection of cryptic or subtle chromosomal rearrangements, whereas interphase FISH can reveal these types of aberrations.

Microarrays and next generation sequencing are advanced, lengthy and costly techniques, which are incorporated into routine testing to detect genome aberrations. FISH is a relatively old technique developed in the early 1980s [12,13,14], but remains an essential tool for the detection of specific biomarkers such as BCR-ABL1 gene fusion, HER2 and ALK gene rearrangements, and has become crucial in the development of personalised medicine [13].  Nevertheless, it remains a rapid, economical and reliable technique in the detection of balanced rearrangement and more importantly in the detection of minimal residual disease (MRD).

FISH together with karyotyping and CMA, offered a flexible approach to the diagnosis of this ALL case, allowing the correct therapy to be chosen. The patient was treated according to the high-risk arm of the *AIEOP-BFM-ALL 2009 protocol and remained in complete cytogenetic and morphological remission 12 months after treatment.

The authors are grateful to the head of the cytogenetics department, Mr Dale Wright, for his comments on an earlier version of the manuscript and to our colleagues at the cytogenetics department, especially Ms Siobhan Battersby, scientist who analysed the G-banded karyotype, found and captured the near haploid cells which greatly assisted in this case. We thank Professor Peter Thompson and Emeritus Professor Chis Maxwell, from the University of Sydney, who provided suggestions to improve the paper.

The diagnostic testing was performed in the Cytogenetics Laboratory-Sydney Genome Diagnostic. No funding was applicable for this publication.

The authors declare they have no conflicts of interest.