Fluorescence in situ hybridization (FISH) seems to be the most applicable and versatile molecular cytogenetic platform for visual interphase chromosome analysis offering a variety of opportunities for studying chromosomal structure and behaviour at the highest microscopic resolution and at all stages of the cell cycle. Quantitative assessment of FISH results has been repeatedly shown to increase the efficiency of FISH-based approaches. Here, we explore the potential of interphase quantitative FISH (IQ-FISH), which is the result of combining interphase FISH with an approach to FISH signal quantification. Firstly, IQ-FISH is applicable for high-resolution molecular cytogenetic analysis of somatic genome variations in large populations of interphase cells (n>1000) inasmuch as it allows for the differentiation between genomic variations (chromosome abnormalities) and specific nuclear chromosomal organization. Secondly, IQ-FISH may be a basis for more sophisticated interphase molecular cytogenetic techniques (i.e. multicolour banding of interphase chromosomes). Thirdly, IQ-FISH depicts nuclear organization by demonstrating the distribution of specific chromosomal DNA within nuclear area. Finally, IQ-FISH is a unique technique allowing quantitative characterization of chromosomal heteromorphisms in the interphase nuclei. It is to note that interphase chromosome heteromorphisms are rarely evaluated because of technical limitations. In conclusion, IQ-FISH appears to be a handy technique to increase the efficiency of interphase chromosome analysis.

Since the arrangement of interphase chromosomes represents the driving force of genome behaviour at the highest level of the organization in the nucleus, it is a major focus of current biomedical research. Moreover, single-cell analysis of intercellular genome variability benefits from addressing numbers and structure of interphase chromosomes. To study human interphase chromosomes, one can address a variety of molecular cytogenetic techniques, which are usually based on fluorescence in situ hybridization (FISH) [1]. Quantitative assessment of FISH results has long been regarded as a way to increase the efficiency of molecular cytogenetic analysis by uncovering DNA content at the targeted chromosomal (genomic) loci [2,3]. Quantitative FISH (QFISH) has been used for visualization of chromosomal loci in interphase [4,5,6]. Additionally, QFISH has been shown to be an integral part of analyzing chromosome variation in single cells [7,8,9]. Furthermore, automated and on-chip FISH-based protocols include signal quantification [10,11]. Similarly, high-resolution FISH-based techniques for multicolor painting of interphase chromosomes involve signal quantification [12,13]. Finally, FISH-signal intensity profiles are able to depict genome architecture within human interphase nuclei [14]. Interestingly, QFISH has been demonstrated to be valuable for molecular cytogenetic diagnosis [4,15,16,17]. Nevertheless, QFISH protocols are rarely used for basic and diagnostic research of human interphase chromosomes. Thus, one can suggest that there is a need for an evaluation of QFISH potential for interphase cytogenetics.

Here, we describe a combination of original interphase FISH protocols [1,7,9,12] with a QFISH approach [3,4,14]. The combination has been termed interphase QFISH (IQ-FISH). To explore IQ-FISH potential, we have analyzed molecular cytogenetic data on chromosomal DNA variation and the arrangement in interphase nuclei of post-mitotic cells of the human brain.

Suspension preparation of 66 fresh-frozen brain samples obtained post-mortem from individuals with schizophrenia (n=22), Alzheimer’s disease (n=10) and from controls (n=34) was carried out according to a step-by-step protocol described in details elsewhere [18,19]. FISH was performed as described in a series of our previous molecular (neuro)cytogenetic reports [19,20,21,22]. We used DNA probes (chromosome-enumeration probes) for chromosome 1 (D1Z1), 9 (D9Z1), 15 (D15Z1), 16 (D16Z3), 18 (D18Z1), and X (DXZ1). Fifty nuclei were analysed per probe for each sample (about 20000 nuclei). Quantification of FISH signals in interphase nuclei (IQ-FISH) was performed using ImageJ software developed by the US National Institute of Health (https://imagej.nih.gov/ij/) [23] as described earlier [3]. Briefly, FISH images were acquired by a charge-coupled-device camera using separate filter set specific for each fluorochrome. Each file of acquired images was saved in black and white (8-bit) and was loaded into the ImageJ software. FISH signal areas were selected using “rectangular” selection tool to generate the plot of image containing the graph depicting the intensity profiles. The area below the graph corresponding to FISH signals was measured. The numerical values obtained from the same image were compared. Examples of IQ-FISH are shown in Figure 1. 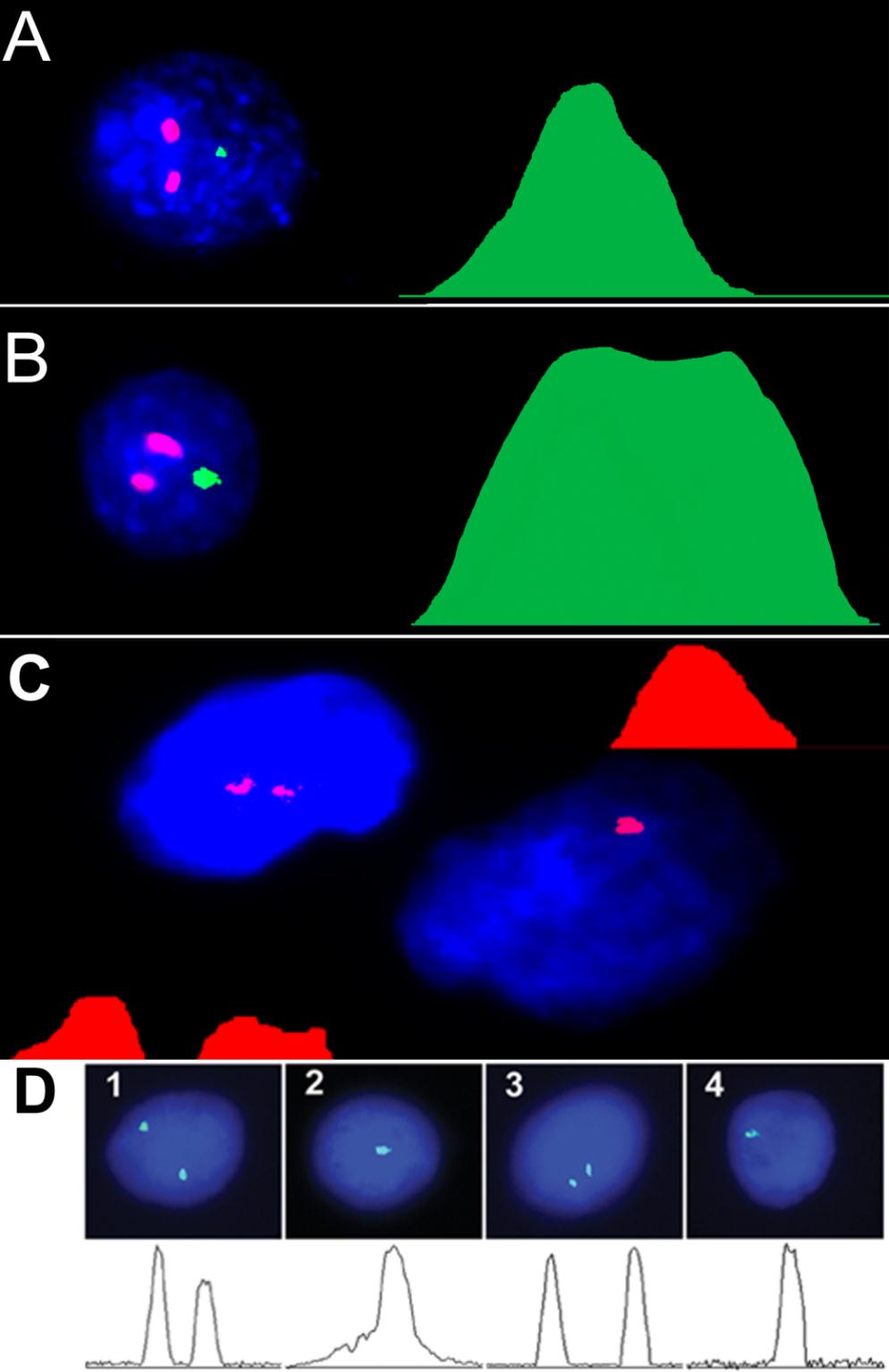 Analyses of IQ-FISH data demonstrate the applicability of this molecular cytogenetic technique for studies of somatic genome variations. These are repeatedly described as significant contributors to human interindividual/intercellular genomic diversity in health and disease [26,27,28]. Our studies of the normal and diseased human brain [20,21,22,26,27,28] have confirmed high applicability of QFISH in uncovering somatic chromosomal mosaicism in large cell populations. Interestingly, it has been reported that a QFISH protocol can be used for automated identification of gene amplifications [29]. Therefore, IQ-FISH is not limited to detection of aneuploidy/polyploidy, but is also applicable for detecting structural aberrations of interphase chromosomes.

Quantitative analysis of FISH signals is a digital basis for ICS-MCB [12,30], a technique extending multicolour chromosomal banding to interphase cytogenetic analysis (for more details, see [9,31]). Although the results of IQ-FISH are comparable with ICS-MCB, it is to keep in mind that the latter is the only technique for microscopic analysis of whole interphase chromosomes at molecular resolutions and at any stage of the cell cycle [1,9,12,30,31]. One can suggest that using both IQ-FISH and ICS-MCB is likely to be the most efficient way of performing molecular cytogenetic microscopic studies of interphase chromosomes.

It has been systematically shown that ICS-MCB can uncover chromosomal organization in the nucleus [1,9,12,13,30]. Additionally, IQ-FISH using DNA probes for repetitive genomic elements highlights the intranuclear arrangements of chromosomal DNAs (i.e. distribution of satellite DNA within a nuclear area) [14]. More importantly, IQ-FISH seems to be the way of uncovering chromosomal associations in almost any FISH study of interphase nuclei.

QFISH has been previously used for the identification of parental origins of homologous chromosomes using either chromosomal heteromorphisms or structural variations (i.e. copy number variations or CNV) [32,33,34]. Here, IQ-FISH is shown applicable for the same purposes. Since interphase chromosomal heteromorphisms are rarely evaluated due to technical limitations, IQ-FISH may be a handy technique for the identification, especially when metaphase karyotyping is not possible.

IYI, IVS, YBY and SGV conceived the idea and approved the technique. IYI wrote the manuscript.

This work was supported by RFBR and CITMA according to the research project №18-515-34005.