In this study, we investigated the degradation of amido black dye in an aqueous solution using ultra-violet (UV) light catalyzed by iron oxide nanoparticles (nano-Fe). The nano-Fe was synthesized by sodium borohydride reduction of ferric chloride solution and was characterized by scanning electron microscopy (SEM), X-ray diffraction (XRD), and X-ray fluorescence spectrophotometry (XRF). The SEM of the nano-Fe showed regular spherical particles, the XRD examination showed a weak and broad peak at Fe (1 1 0), and the XRF study showed that the element with the highest composition was Fe2O3 (60.80%). The degradation experiments showed that the UV light catalyzed by nano-Fe could effectively degrade amido black dye. The nano-Fe/UV system could degrade 5 mg/L of amido black dye up to 93.2% at 254 nm after being irradiated for 60 min. The nano-Fe/UV system could be described by the Langmuir–Hinshelwood kinetic model, and the rate constants (kapp) were 0.0183–0.0323 min−1. Thus, UV light combined with nano-Fe can be applied for the efficient remediation of dye wastewater.

Water is indispensable for life. However, the quality of water is threatened by natural and anthropogenic activities. Wastewater containing inorganic and organic pollutants is predominately discharged from domestic, industrial, and public facilities and has deteriorated water quality in many parts of the world. Agricultural activities and manufacturing, mining, and processing industries release heavy metal ions, organic compounds, dyes, and other toxic pollutants regularly, thus contaminating groundwater and surface water [1]. Polluted water is unsafe for the ecosystem and human consumption. For example, dyes are extensively used in the textile industry and are also commonly used in the food, pharmaceutical, biological imaging, leather, plastic, liquid crystal, and cosmetic industries. There are greater than 10,000 different commercial dyes and pigments. Over 7 × 105 tons are produced annually worldwide [2] and around 5–10% of these dyes are discharged into the water as wastes [3]. Based on the structure, dyes can be classified into azo, diazo, acidic, basic, metal complex, etc. Additionally, dyes are commonly classified based on their source of production into natural dyes and synthetic dyes. Synthetic dyes resist decomposition due to their aromatic structures, which increase their physicochemical, thermal, and optical stability [4]. The azo-based dyes are the largest class of dyes; up to 60–70% of industrially synthesized dyes are azo compounds [5]. Color imparted by dyes is the first contaminant to be detected in water and must be removed from wastewater before it is discharged into water bodies [6]. Industrial wastewater containing dyes and their intermediates is usually toxic and carcinogenic to aquatic life. It causes serious environmental and aesthetic problems and reduces light penetration in water, which affects photosynthesis adversely [7]. Hence, dye effluents need to be treated before they are discharged into water bodies [8].

Various treatment techniques, such as adsorption, oxidation, coagulation/flocculation, ion exchange, photocatalysis, ozonation, electrochemical method, biological treatment, etc. [9], are used to remove dyes from contaminated water and wastewater. The treatment method to be applied depends on factors such as the organic or inorganic content, the concentration of the pollutant, toxicity, and environmental discharge standards [10]. Nanomaterials also play an important role in water treatment. Advanced materials developed through nanoscience and nanotechnology can effectively remove toxic pollutants from water and wastewater [11,12]. In photocatalysis, iron is among the most used transition metal for catalyzing wastewater treatment [13]. Iron oxide is popular for catalysis due to its unique properties, such as excellent magnetic properties, extremely small size, high surface area-to-volume ratio, great biocompatibility, and surface modifiability [14]. According to many studies [1,10,15,16], the use of iron for water purification has several advantages in the presence of ultra-violet (UV) light, visible light, and in the absence of light.

In this study, the photocatalytic degradation efficiency of a model aqueous solution of amido black dye, particularly the kinetics and mechanism of degradation, was investigated. The effects of UV light, the amido black dye concentration, and irradiation time were considered.

The synthesis of nano-Fe is shown in Equation 1. Initially, 27 mL of 0.2 M FeCl3·6H2O was transferred into a 500 mL three-neck round bottom flask and titrated with 50 mL of 0.2 M NaBH4 solution. The solution was stirred vigorously with a stirring rod until the NaBH4 solution was completely added to the ferric chloride solution [20]. The suspended black nano-Fe was filtered with Whatman No. 32 filter paper and dried in an oven at 100oC for 24 h.

The amido black dye was degraded in the dark under UV light irradiation in a beaker with the nano-Fe catalyst. Then, 0.02 g of the nano-Fe was added to 50 mL of 5.0 mg/L solution of amido black dye. The UV lamp was placed above the beaker containing the solution, and the distance between the UV lamp and the amido black dye solution was about 14 cm. The samples were filtered after the time elapsed (10 - 60 min), and the absorbance of the degraded dye was measured at 619 nm using a Thermo Scientific UV/visible spectrophotometer (Model: Helios Epsilon 3SGM 320011). The degradation efficiency (%) was obtained using Equation 2. The effects of short and long UV wavelengths (254 and 365 nm), amido black dye concentration, and irradiation time on the degradation of the dye were investigated.

Here, ABo and ABt denote the initial and final concentrations of amido black dye, respectively.

The SEM of the nano-Fe (at 8,000× magnification) showed regular spherical particles that were connected to each other(Figure 1). The X-ray diffractogram (Figure 2 and Figure 3) showed a weak and broad peak at Fe (1 1 0); the weak peak of the nano-Fe showed that the iron was reduced [21] and had a poor crystalline structure. XRF analysis of the nano-Fe showed that Fe2O3 was the most prevalent compound (60.80%) and the main element of the iron nanoparticles. The other prevalent compounds included SiO2 (29.50 wt%) and Al2O3 (2.16 wt%), while TiO2, CaO, P2O5, K2O, MnO, MgO, and Na2O were less prevalent, and their abundance ranged from 0.02–0.7 wt%. 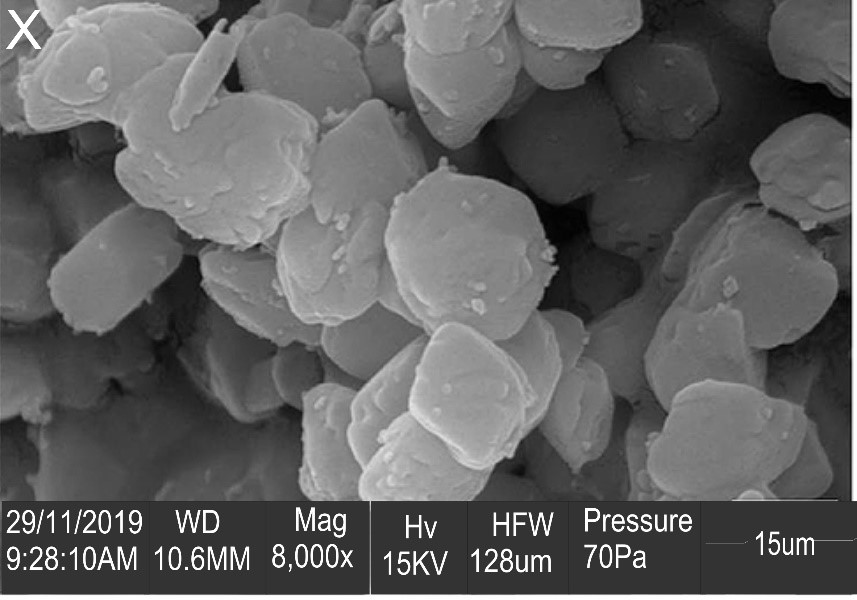 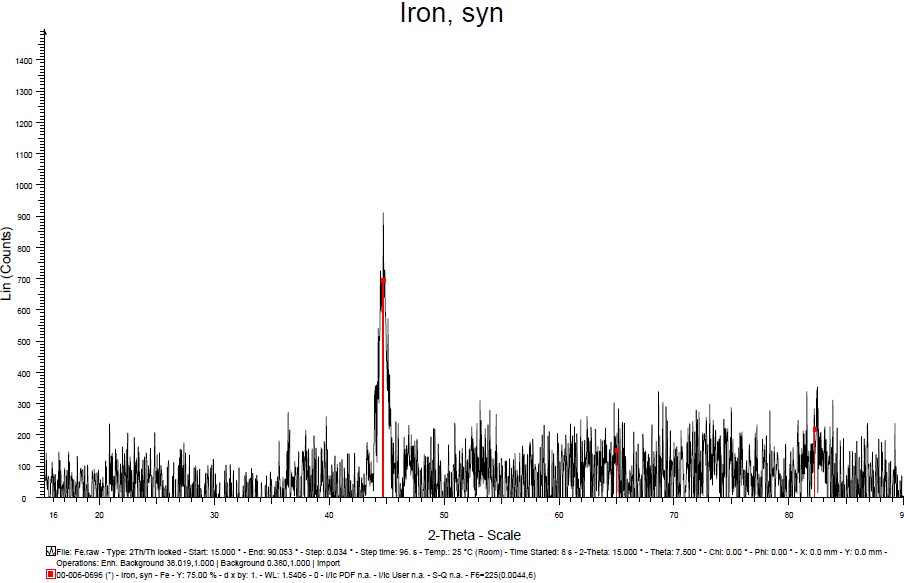 Figure 3 The X-ray diffractogram of nano-Fe. 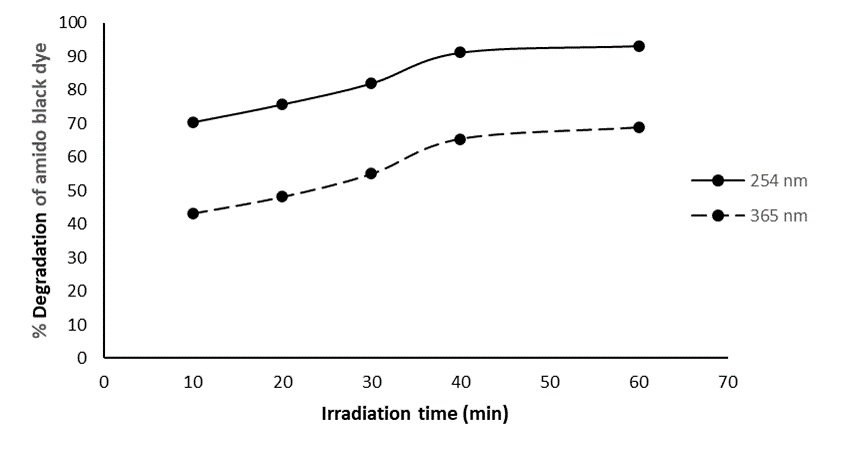 Figure 4 The effect of the irradiation time and the wavelength of UV light on the photocatalytic degradation of amido black dye.

Here, ABo and ABt denote the amido black dye concentrations at time 0 and t, respectively, and k denotes the pseudo-first-order rate constant (Figure 5). 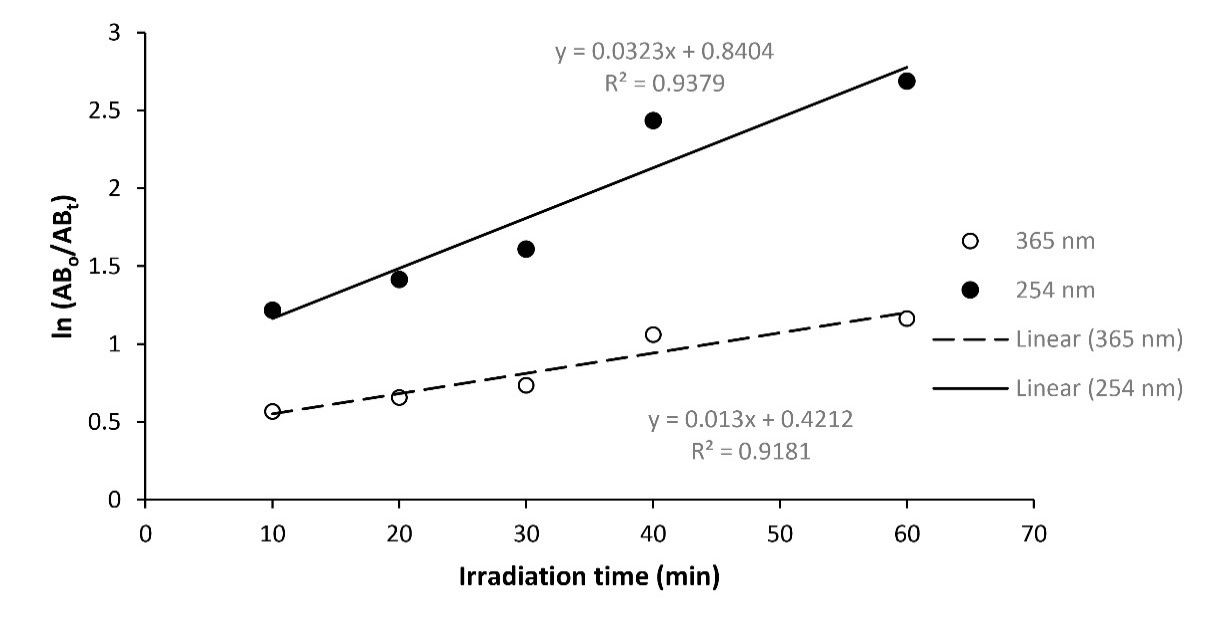 The integration of Equation 4 leads to Equation 5 (with AB = ABo at t = 0; ABo denotes the initial concentration in the bulk solution and t denotes the reaction time); kapp denotes the apparent pseudo-first-order rate constant and was obtained from the slope of the plot of $ln^{AB_o}/_{AB_t}$ versus time (t) (Figure 6). 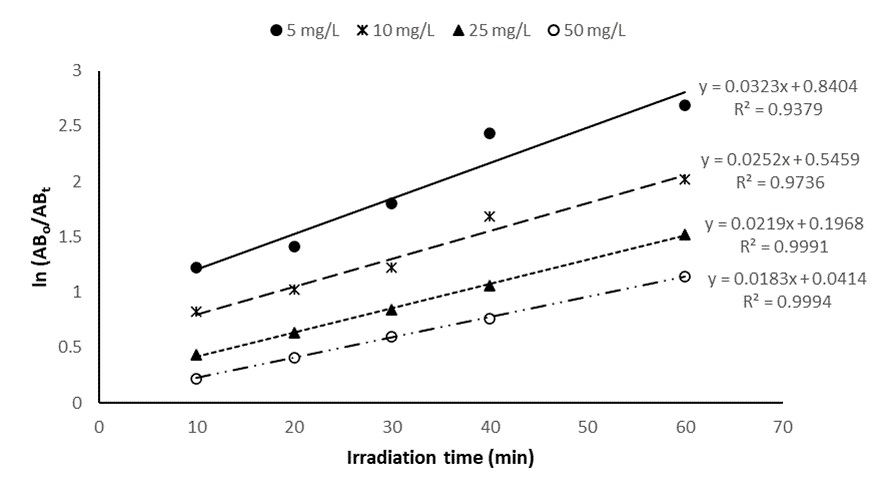 Figure 6 The plot of ln ABo/ABt vs. time.

To determine the mechanism of action of the UV light catalyzed by nano-Fe, a heterogeneous kinetic model based on a Langmuir-Hinshelwood (L-H) model was applied (Equation 6).

An R2 value of the Langmuir-Hinshelwood kinetic plot (0.9173) indicated that the degradation of amido black dye conformed to the L–H model (Figure 7). The values of the L–H constants, i.e., KLH and kc, are presented in Table 1. 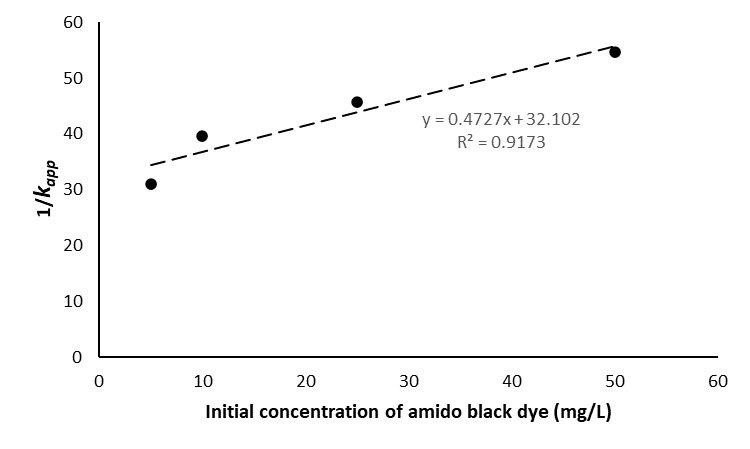 According to Akintayo et al. [22], photogenerated holes in the valence band $h_{VB} {}^+$ of the nano-Fe react with H2O to form OH•. The $e_{CB} {}^-$ in the conduction band generates electron resonance plasma over the catalyst surface (nano-Fe) and reacts with O2 to produce O2•. Thus, the OH• and O2• radicals react with the amido black dye to form CO2 and H2O.

The authors declared that no competing interests exist.