A new chiral cyclopalladated ferrocenyl imine catalyst (called 4a2) was designed and synthesized, and its self-assembly catalytic polymeric brush supported on silicon (denoted as Si@PB4a2) was also fabricated by surface-initiated atom transfer radical polymerization (ATRP) and characterized. The catalytic properties of monomer 4a2 in homogeneous and Si@PB4a2 in heterogeneous in Heck and Suzuki cross-coupling were investigated, respectively. They exhibited higher catalytic activity in Heck, and Suzuki coupling reactions in homogeneous and heterogeneous using water as the solvent, and the catalytic activity of Si@PB4a2 with a turn of number (TON,11933 molproduct/molcat) in heterogeneous was 200 times more than that of 4a2 in homogeneous due to the ordered arrangement of the catalyst supported on silicon. Si@PB4a2 had high recyclability, i.e., at least eight runs and six runs, in Suzuki and Heck coupling reactions, respectively.

Heterogeneous catalyzed reactions play an important role not only in research but also in the chemical and pharmaceutical industry [1], where palladiumcatalyzed coupling reactions are one of the most powerful methods in organic synthesis [2]. Although coupling reactions catalyzed by a heterogeneous Pd catalyst have been well developed, there are still some problems to be solved, such as the relatively low activity, a high loading, high temperature, organic solvents, and difficulty in recycling [3]. Therefore, designing and preparing a novel heterogeneous catalyst are crucial for promoting activity and sustainable chemistry [4]. Catalytic activity highly depends on the structure of the ligands, and designing ligands properly is still a challenge [5]. Chiral ligands play an important role in material science and are the most powerful protocols for improving the catalytic activity [6,7,8,9,10], indicating that combining the chiral moiety and certain functional groups in a ligand can increase the catalytic activity [11]. Also, the arrangement and orientation of catalysts on supports is another important factor to enhance the catalytic activity [12,13].

Arranging chiral catalysts on support by Langmuir-Blodgett films and Self-assembly (SAM) is an ideal way to investigate their catalytic properties at a molecular level [14,15,16,17,18]. Surface-initiated living radical polymerization (SI-LRP) has attracted much attention because of its excellent control of molecular weight and polydispersity [19,20]. Schiff-base groups, which can coordinate many transition metals, are usually used to get organometallic catalysts, showing efficient catalytic properties due to their diversity and stability [21,22,23,24]. Cyclopalladated ferrocenylimine and its self-assembly monolayer are the most efficient catalysts in Suzuki coupling reactions [25,26]. Catalytic monolayers with different ligands with Schiff-base groups and their complexes are used to catalyze coupling reactions [13,14,27,28,29,30,31,32,33,34,35,36,37]. However, a few studies on chiral cyclopalladated brushes immobilized on supports in a coupling reaction in heterogeneous were reported [38,39,40,41].

In this study, a new chiral planar cyclopalladated imine was synthesized, and its self-assembly catalytic polymeric brush anchored on silicon was fabricated by SAM and ATRP. Its catalytic performance was investigated by performing Heck and Suzuki coupling reactions as a template.

The water contact angle (WCA) of the hydrophilic substrate (Si@OH) was 7.0°and changed to 53.0°aftersalinization (Si@APTES) [42], and then increased to 87.8°when the hydrophilic moiety of the initiator was added to the surface of silicon (Si@APTES/I) (Figure S1). Finally, the WCA was 68.0° after 4a2 was added due to polymer brush formation (Si@PB4a2) by ATRP. The results showed that the properties of the surface varied during the fabrication of the catalytic polymer brush. AFM images of hydrophilic silicon showed a flat morphology with ca. Ra 0.690 nm (Figure 1A). Ordered surface images with a ca. Ra 1.101 (Figure 1B) was observed after salinization [43]. The AFM images obtained after initiator addition also exhibited a homogeneous surface with a higher Ra 1.919 nm (Figure 1C), which increased to Ra 2.156 nm after 4a2 was added (Figure 1D). The results of AFM suggested that the self-assembly step of Si@PB4a2 occurred, resulting in morphological changes.

UV spectra in the fabricating steps of Si@PB4a2 were measured (Figure S3). No absorption occurred for Si@OH (black line). Absorption was observed at about 220-230 nm designed to the amine for Si@APTES (red line). The peak at about 230 nm appeared (green line) after modification by the initiator (Si@APTES/I). The characteristic absorption peak of the ferrocenyl group in Si@PB4a2 (blue line) appeared after 4a2 was added. The electrochemical properties at different steps of ITO@PB4a2 were also measured (Figure S4). An oxidative wave at about -0.15 V denoted to amine appeared after grafted APTES (red line) and disappeared when grafted with the initiator (blue line). The redox waves of ferrocene appeared, indicating that ATRP occurred on the surface of the substrate (green line) [38]. These results showed that a polymer brush was prepared. The content of palladium was 8.38 × 10-6 mmol/cm2, measured by ICP-AES. The molecular weight was recorded (Mn = 6,518; Mw/Mn = 1.19).

The optimized reaction conditions in the Suzuki coupling reaction catalyzed by 4a2 in homogeneous were determined (Table S3) and were: Na2CO3, H2O, 80 °C, and 12 h. Under optimized reaction conditions, substrate screening was evaluated in Suzuki coupling reactions (Table S4). Higher and moderate yields were obtained for aryl bromide with electron repulsion or withdrawing groups (Table S4, entries 1-10) but lower TON values. Catalytic properties of 4a2 in Heck coupling reaction in homogeneous was also investigated (Table S5), and the optimized reaction conditions were: Na2CO3, H2O, 100 °C, and 12 h. Under optimized conditions, substrate screening was conducted (Table S6). Higher yields could be achieved with benzyl bromides bearing withdrawing groups at p-or m-substitute (Table S6, entries 1-3,5), except for o-substitute, due to the steric effect (entries 4,6). However, when benzyl bromides had an electron repulsion group, lower yields of the corresponding products were obtained due to the electronic effect (Table S6, entries 7-9).

The orientation of the catalyst was related to its catalytic activity. The orientation of catalyst in the self-assembly film made the substrate easier to approach the active site of catalyst (Scheme 3). Interestingly, the ligand having much bulk was a crucial factor for the coupling reactions, which was due to the electron-richness and the steric of the triphenylphosphine ligands and chiral structure [10]. 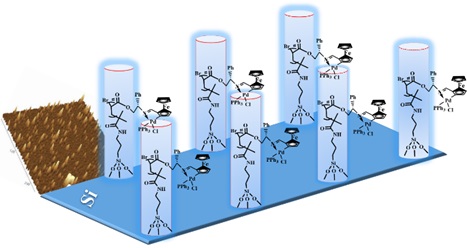 Scheme 3 The proposed orientation of Si@PB4a2 (inset: AFM image of the polymer brush).

The catalytic activity of Si@PB4a2 in Suzuki and Heck coupling reactions in homogeneous and heterogeneous with water as the solvent was investigated. Si@PB4a2 exhibited higher activity in heterogeneous than 4a2 in homogeneous. Recyclability of Si@PB4a2 was at least eight times and six times in Suzuki and Heck coupling reactions, respectively. These results demonstrated that the advantages of the ordered chiral catalytic monolayer can enhance the activity by a combination of orientation and proper chiral groups.

1. Figure S1: WDCAs at different preparation steps in the fabrication of the polymer brush (Si@PB4a2).

3. Figure S3: The UV-vis absorption spectra for the preparation of Si@PB4a2.

5. Figure S5: Recycling of the Si@PB 4a2 polymer brush in the Suzuki coupling reaction.

6. Figure S6: Recycling of the Si@PB 4a2 polymer brush in the Heck reaction.

7. Table S1: Crystal data and structure refinement of complex 3a2.

9. Table S3: The effect of the base, temperature, and time on the Suzuki-Miyaura reaction conditions α.

11. Table S5: The effect of the base, temperature, and reaction time on Heck coupling α.

13. Table S7: The effect of the base, temperature, and reaction time on the Suzuki-Miyaura reaction conditions α.

15. Table S9: The effect of the base, temperature, and reaction time on Heck coupling α.

Crystallographic data for the structures reported in this paper have been submitted to the Cambridge Crystallographic Data Centre as a supplementary publication with the CCDC number 1899877 (1). Copies of the data can be obtained free of charge on application to CCDC, 12 Union Road, Cambridge CB2 1EZ, UK (fax: (44) 1223 336-033; e-mail: deposit@ccdc.cam.ac.uk).