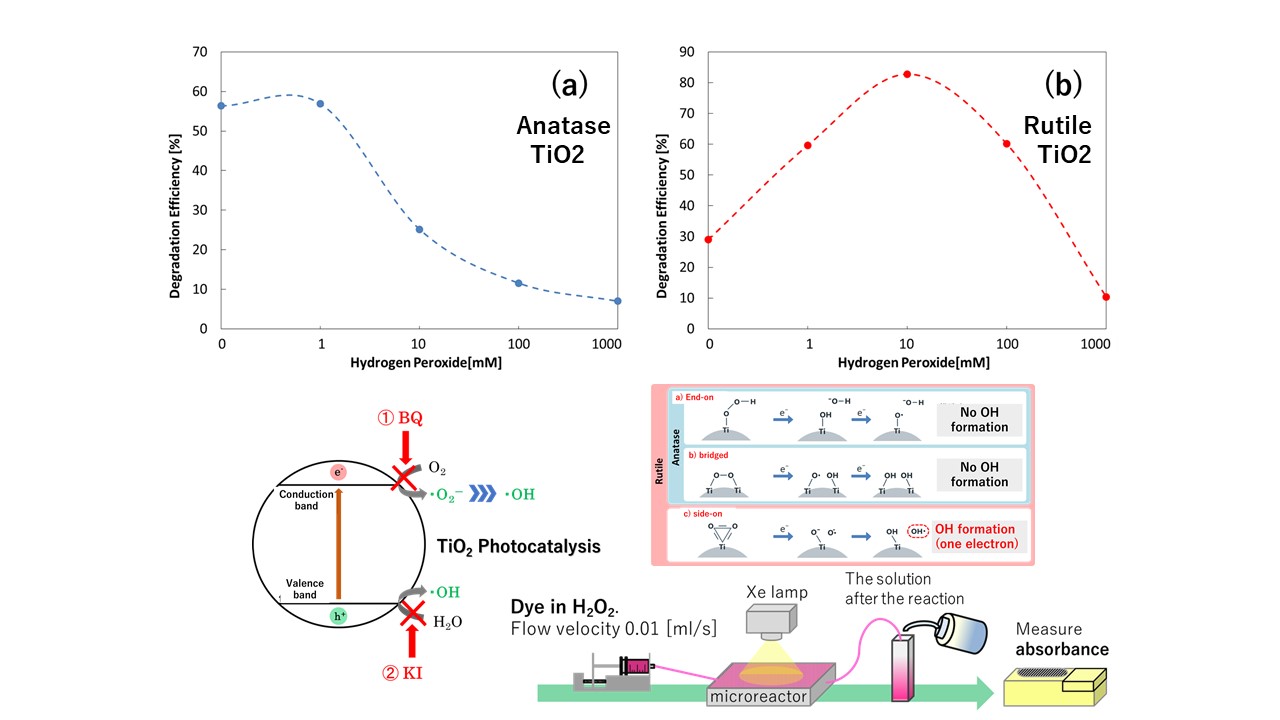 Photocatalysis is known to degrade organic compounds, inactivate or remove viruses, and finds a wide range of applications [1,2,3,4]. Among them, TiO2 is a widely used photocatalyst due to its low cost, non-toxicity, and good oxidizing nature [5,6]. TiO2 exists as three polymorphs of anatase (tetragonal), rutile (tetragonal), and brookite (orthorhombic) [7]. Since it is difficult to prepare the brookite TiO2 without anatase and rutile phases [8], the photocatalytic activities and stabilities are mainly investigated for anatase and rutile TiO2. Although rutile TiO2 is the stable form and anatase is the metastable form, the latter has higher photocatalytic activity than the former type [9]. Recently, Zhang et al. [10] investigated the difference in the photocatalytic activities of the three polymorphs using density functional theory calculations and suggested that the differences were attributed to the longer lifetime of the photoexcited electrons and holes in anatase due to its indirect transition, while rutile and brookite showed direct transition. Also, the effective mass of photogenerated electrons in anatase was lowest, which eased the migration of the photoexcited electrons compared to those in rutile and brookite forms.

2.1 Fabrication of the TiO2 Film on a Microreactor

The microreactor purchased from Key Chem-Lumi Co. Ltd. was used for the study without any further modification. It has an internal channel width of 1.0 mm, depth of 0.5 mm, and length of 1100 mm. In order to avoid the disclosure of the channel of the microreactor, TiO2 film was deposited on the inner side of the quartz window in the microreactor by the sol-gel calcination method, as shown in Figure 1(a). The calcination temperature for the TiO2 sol on the glass substrate was set to 200 °C. The TiO2 sols of the anatase form (AT-01) were purchased from Photo-Catalytic Materials Co. Ltd., and those of the rutile form (RA-06) were a generous gift from Taki Chemical Co. Ltd. The crystal structure of TiO2 on the glass substrate was verified by measuring the XRD patterns of each TiO2 film, as shown in Figure 2. 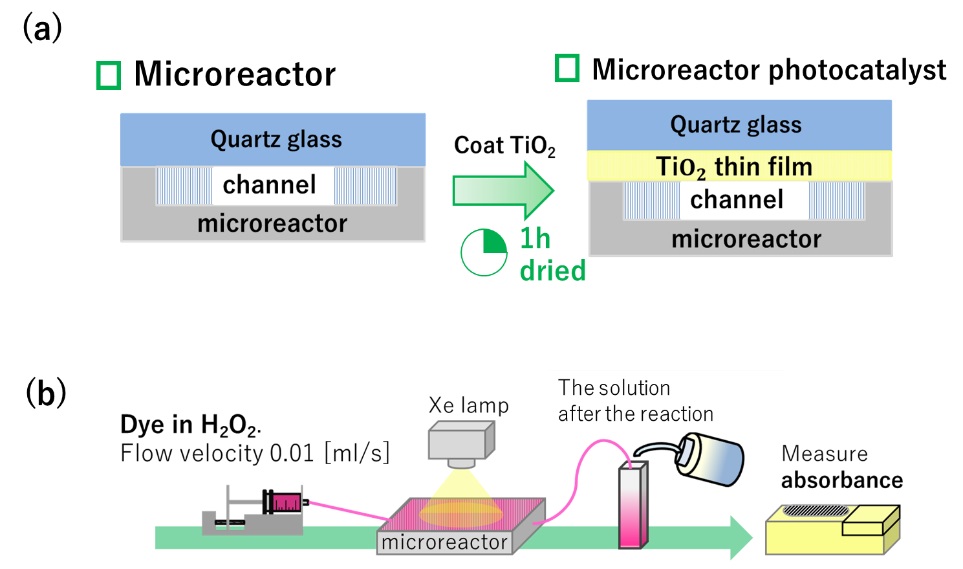 Figure 1 (a) Coating of TiO2 on the glass substrate of the microreactor; (b) Experimental setup of the TiO2 photocatalytic microreactor system. 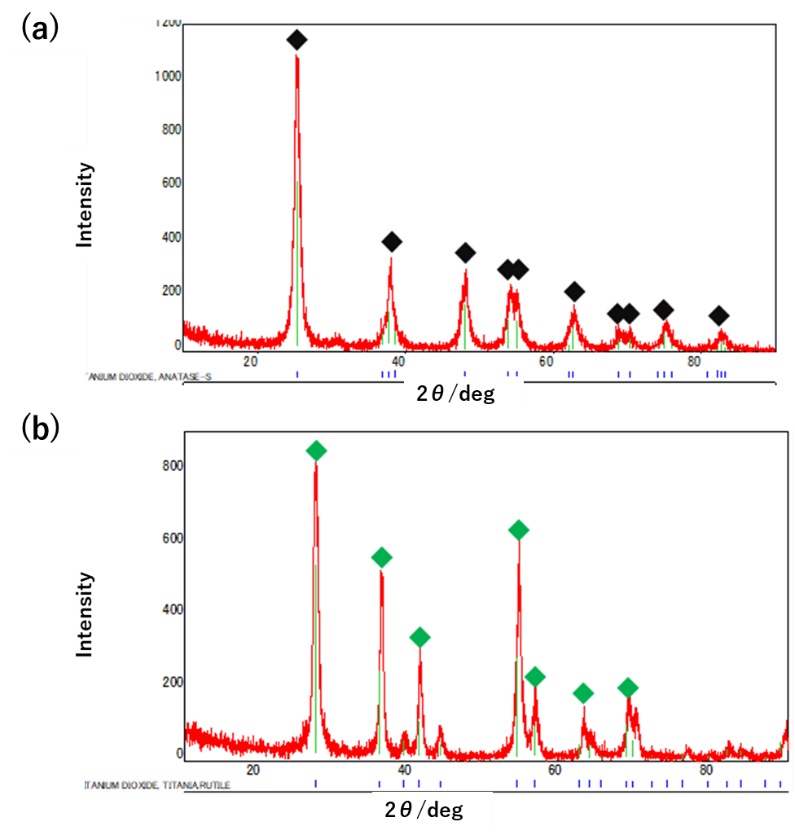 The schematic figure of the experimental setup is given in Figure 1(b). The azo dye solution injected by the microsyringe flowed to the microreactor at a speed of about 0.1 µL/min. Meanwhile, a 150W Xe lamp (L2273, Hamamatsu Co. Ltd.) was used to irradiate the TiO2 films on the quartz glass attached to the flowing dye solution in the microreactor. Upon ceasing the flow inside the microreactor, the azo dye solution was collected in a glass container and used for the evaluation of the degradation efficiency by measuring the absorbance of the azo dye solution. The absorbance of the azo dye solution was recorded by a spectrometer (Lambda 35, Perkin Elmer, Inc.). The degradation efficiency is defined by the following equation based on the ratio of the absorbance of the azo dye solution with and without the photocatalytic reactions: Degradation efficiency (%) = 100 - {(absorbance before reaction)/(absorbance after reaction) × 100}. In order to understand the effect of H2O2 addition, a certain concentration of H2O2 was mixed in the azo dye solution, which was injected into the microreactor using the microsyringe. In the present study, three types of azo dyes (acid orange 7, acid red 151, and acid yellow 23) were used without any further purification. In order to confirm that the films of anatase and rutile TiO2 were prepared by the sols of AT-01 and RA-06, respectively, the UV absorption spectra of these films were recorded. The results are shown in Figure 3. The absorption peaks of the anatase and rutile films were observed at 380 nm and 400 nm, respectively. It is well known that the rutile TiO2 shows an absorption peak at a longer wavelength than anatase. The present results were consistent with the XRD patterns to confirm that the films of the sol AT-01 and sol RA-06 corresponded to the anatase and rutile forms, respectively. 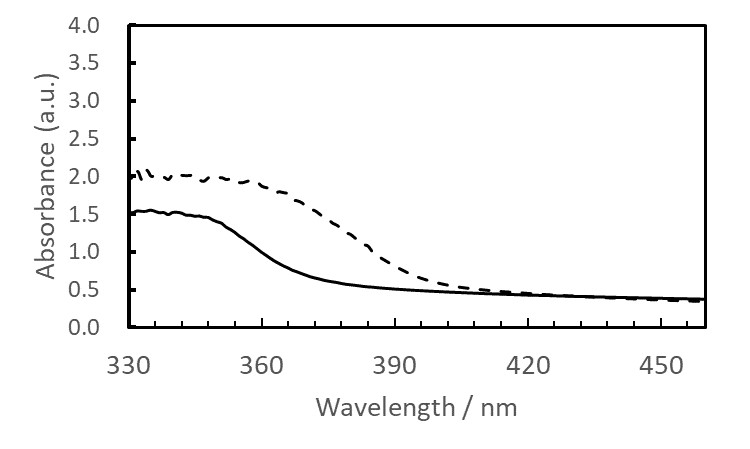 Figure 3 UV absorption spectra of the TiO2 film on the glass substrate prepared by the calcination of (a) TiO2 sol (AT-01, Photo-Catalytic Materials) (solid line) and (b) TiO2 sol (RA-06, Taki Co. Ltd.) (dashed line)

3.1 Preliminary Experiment: Measurement of the Fluorescence of Rhodamine 6G in the Microreactor 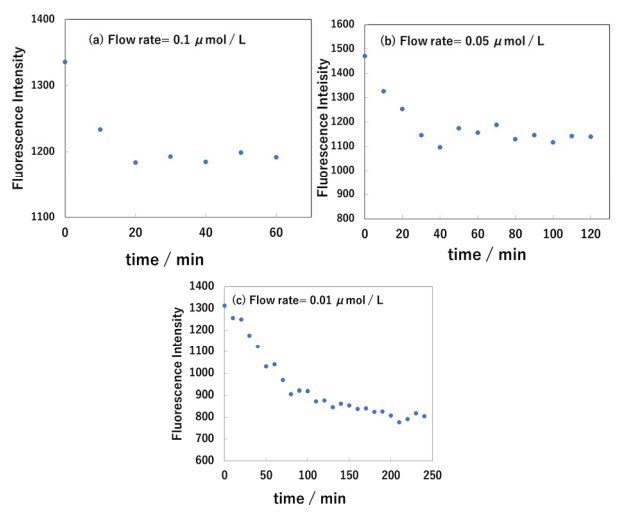 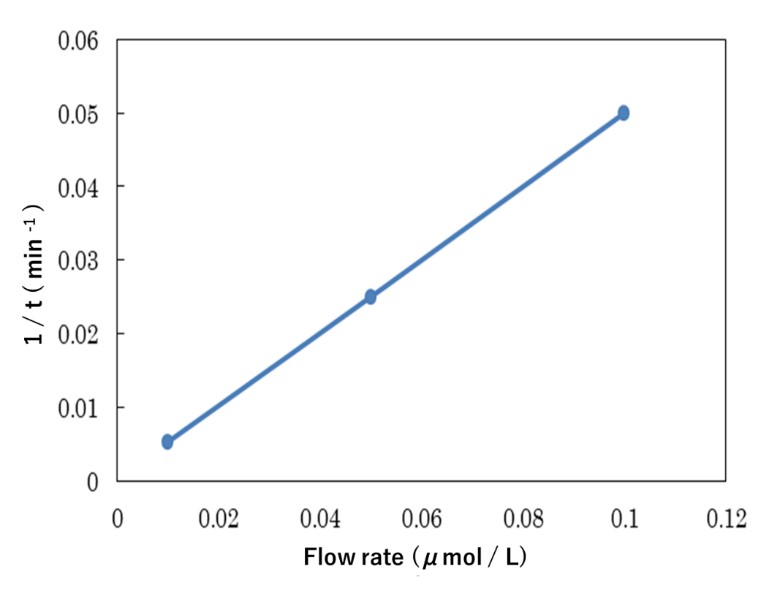 Figure 6 Relationship between the reciprocal of the time taken to achieve constant fluorescence intensity and flow rate of the microreactor.

Thus, the azo dye solution at the end of the flow channel in the microreactor was irradiated with Xe lamp to evaluate the degradation efficiency of the photocatalysis in the following experiments.

3.2 Effects of the Addition of H2O2: Comparison between Anatase and Rutile TiO2

Since the degradation process in the microreactor by the occurrence of photocatalytic reaction was confirmed in the present system, the effects of H2O2 on the photocatalytic degradation efficiency were investigated. In order to perform this experiment, a certain amount of H2O2 was mixed with the azo dye solution and injected into the microreactor. The azo dye with an acid orange 7 was used for the test. The results are presented in Figure 7. In the anatase TiO2 film (AT-01, Photo-Catalytic Materials), the degradation efficiency monotonically decreased with the increasing concentration of H2O2, as shown in Figure 7(a). On the other hand, in the rutile TiO2 film (RA-06, Taki Chemical), the degradation efficiency initially increased with the concentration of H2O2 and then started to decrease as the concentration of H2O2 reached 10 mM, as shown Figure 7(b). There have been previous reports on the acceleration of the TiO2 photocatalytic reaction by the addition of H2O2, but no previous investigations on the effects of H2O2 on the degradation efficiency of the TiO2 crystal forms, such as anatase and rutile. Hirakawa et al. [14] reported that the anatase TiO2 form released less amount of OH radicals upon the addition of H2O2, while the rutile form showed enhanced OH radical formation. The present results are consistent with the reported experimental observations. Harir et al. [11] performed a detailed kinetic study of the H2O2/TiO2 system using commercially available TiO2 (P25, Deggusa) powders. Also, the effect of H2O2 on photocatalytic activity was investigated and reported to be maximum at around 10 mM of H2O2. 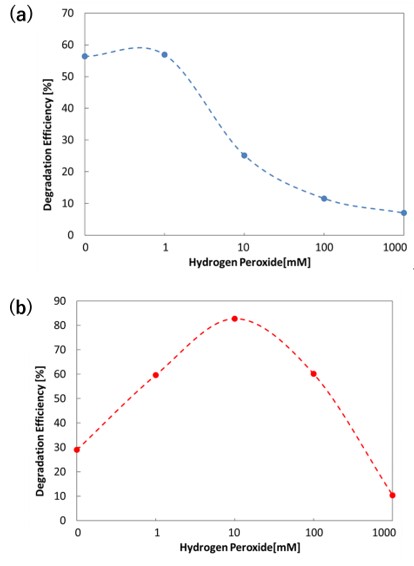 Figure 7 Relationship between the concentration of H2O2 versus degradation efficiency (%) of acid orange 7 in the UV-irradiated microreactor coated with the TiO2 film of (a) anatase form and (b) rutile form.

The inhibition effects of H2O2 on the photocatalytic activity of TiO2 under relatively high H2O2 concentration were reported. The previous experimental results are consistent with the current observation of the rutile form. Since the photocatalytic TiO2 powders (P25, Degussa) consisted of the mixed phases of anatase and rutile, a mixed-phase TiO2 film was developed on the quartz glass of the microreactor to find the effect of H2O2 on the photocatalytic activity in the present study. The AT-01 and RA-06 sols were mixed to develop this mixed-phase film. The results are presented in Figure 8. Irreversible to the anatase-rutile ratios of TiO2, degradation efficiency, The photocatalytic activity was maximum at around 10 mM of H2O2, which was consistent with the results of Harir et al. [11], suggesting that the effect of H2O2 on the degradation efficiency was attributed to the crystal forms. In other words, the rutile form in the mixed crystal phase of TiO2 played a key role in the effect of H2O2 addition. The irreversible morphology of the TiO2 was film or powders. 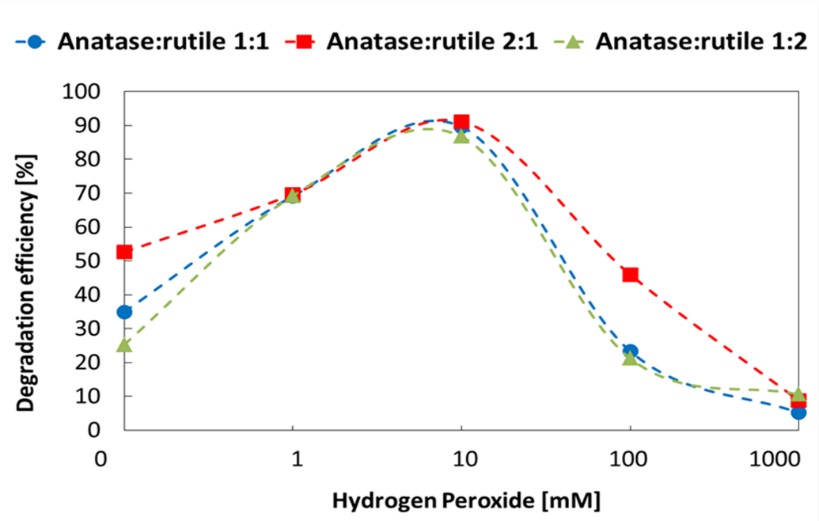 Figure 8 Relationship between the concentration of H2O2 versus degradation efficiency (%) of acid orange 7 in the UV-irradiated microreactor coated with the TiO2 film containing different anatase and rutile ratios obtained by mixing anatase TiO2 sols (AT-01) and rutile TiO2 sols (RA-06). 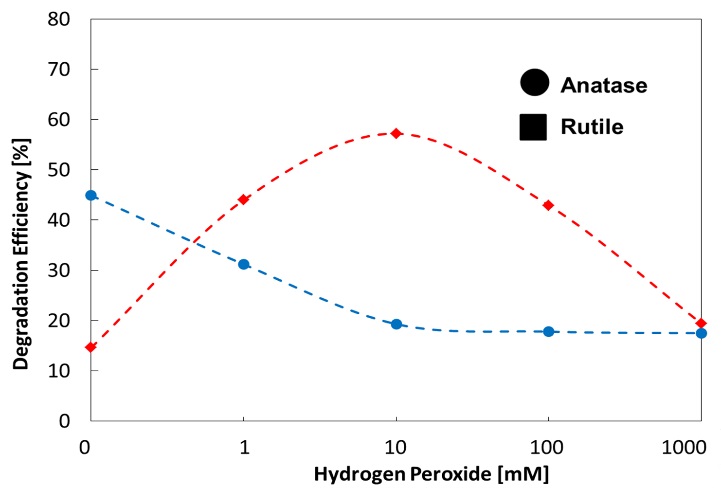 Figure 9 Relationship between the concentration of H2O2 versus degradation efficiency (%) of acid red 151 in the UV-irradiated microreactor coated with the TiO2 film of anatase form (filled circle) and rutile form (filled square). 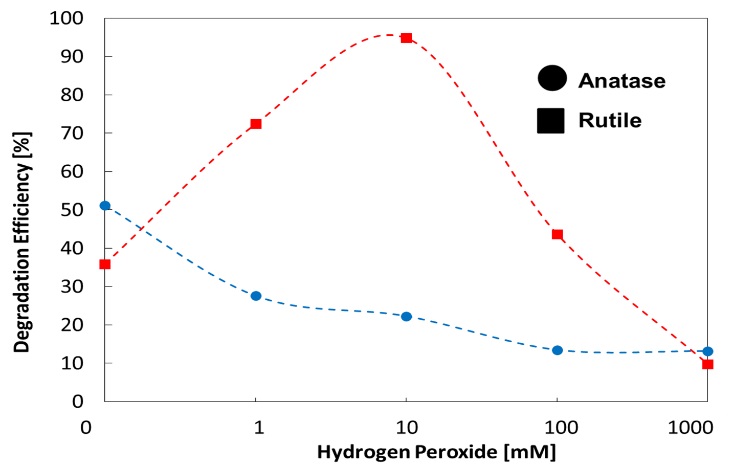 Figure 10 Relationship between the concentration of H2O2 versus degradation efficiency (%) of acid yellow 23 in the UV-irradiated microreactor coated with the TiO2 film of anatase form (filled circle) and rutile form (filled square).

3.3 Effects of the Addition of Scavengers: Discussion of the Mechanism of Anatase and Rutile TiO2 under the Microenvironmental Conditions

Based on the previous studies, benzoquinone (hereafter, BQ) [20] and KI [21] were used as the electron and hole (OH radical) scavengers, respectively, and acid orange 7 was chosen as the representative azo dye solution in the present work. The results are presented in Figure 11 and Figure 12. It was observed that the electron scavengers of BQ showed relatively larger effects compared to the slight effects of KI on the photocatalytic degradation efficiency of acid orange 7. Since the OH radicals were formed by the reduction reaction of O2 via H2O2, the influence of the addition of BQ on the degradation efficiency of the azo dye (acid orange 7) in the presence of H2O2 was also investigated.

Figure 11 Relationship between the degradation efficiency (%) of acid orange 7 in the UV-irradiated microreactor coated with the TiO2 film and the concentration of KI acting as hole scavengers: (a) anatase form of TiO2 (AT-01) and (b) rutile form of TiO2 (RA-06). 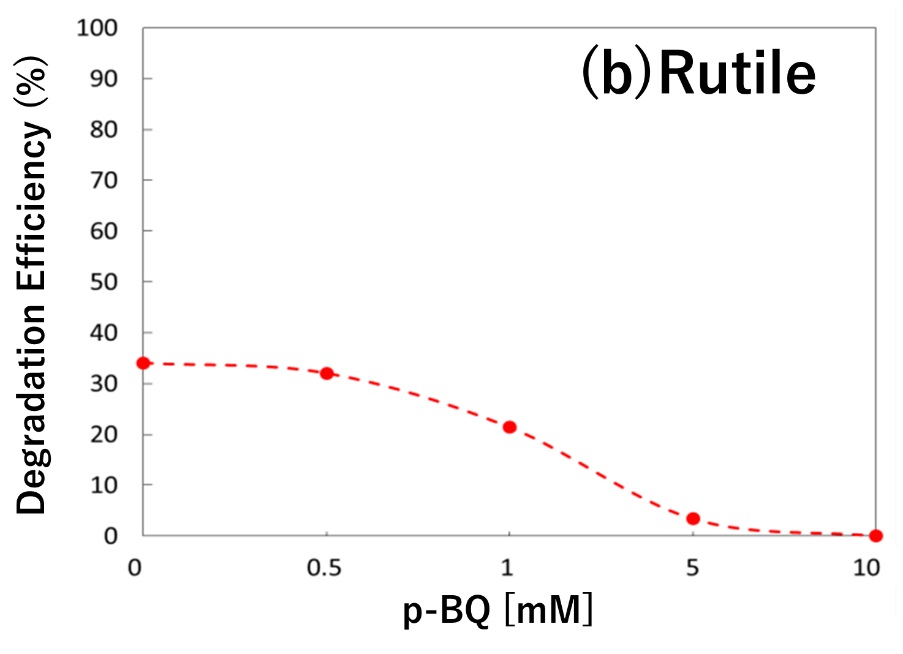 Figure 12 Relationship between the degradation efficiency (%) of acid orange 7 in the UV-irradiated microreactor coated with the TiO2 film and the concentration of p-BQ (p-benzoquinone) acting as electron scavengers: (a) anatase form of TiO2 (AT-01) and (b) rutile form of TiO2 (RA-06).

Figure 13 Relationship between the degradation efficiency (%) of acid orange 7 in the UV-irradiated microreactor coated with the TiO2 film and the concentration of p-BQ (p-benzoquinone) acting as electron scavengers in the presence of 10 mM of H2O2: (a) anatase form of TiO2 (AT-01) and (b) rutile form of TiO2 (RA-06). 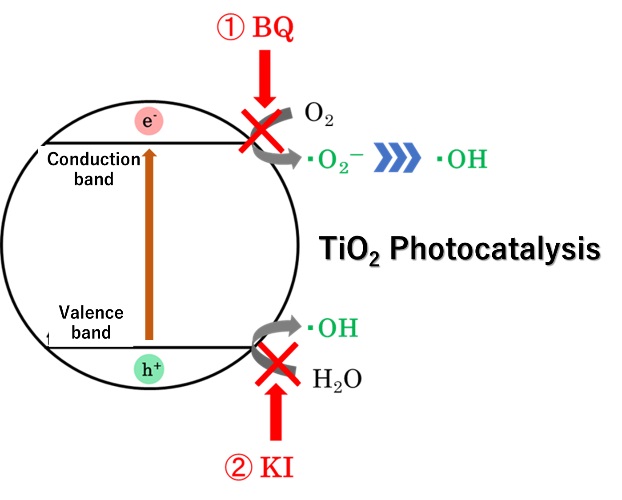 Figure 14 Schematic representation of the inhibition effects of each scavenger (KI and p-BQ) on the TiO2 photocatalytic reaction.

The authors acknowledge Prof. Kenji Katayama for helpful advice for the fabrication of the microreactor system. One of the authors also acknowledges the support from the GEAR 5.0 Project of the National Institute of Technology (KOSEN) in Japan.

No organization or foundation was funded for this research.