Objective: To report a unique case of cerebellopontine angle glioblastoma with concurrent spinal cord involvement. Background: Glioblastoma (GBM) is the most common primary malignancy of the central nervous system (CNS), comprising 46.6% of all CNS malignancies. By anatomic location, cerebellopontine angle (CPA) GBMs are exceedingly rare. To our knowledge, the following case represents the tenth reported case of CPA GBM and the first with a corresponding spinal cord tumor on presentation. Methods: Retrospective chart review was conducted for a patient with CPA GBM. The patient consented to the publication of her diagnostic studies. Result: A 43-year-old female presented with a 3-month history of right ear hearing loss. Brain magnetic resonance imaging (MRI) demonstrated a right CPA mass as well as a cervical spinal cord mass of unknown histology. Pathology showed GBM, IDH wildtype and negative for the H3 K27M mutation, while the cervical spinal cord lesion was not amenable to biopsy. She received proton beam therapy with 60 Gy to the GBM and 50.4 Gy to the spinal cord tumor in 30 fractions each with concurrent Temozolomide. She received 2 cycles of adjuvant Temozolomide prior to her demise due to progressive disease. Conclusion: There are four possible origins of CPA glioblastoma: the cerebellum, brainstem, root entry zone of cranial nerve VIII, and heterotopic glial cells of the leptomeninges. Prognosis does not appear to depend on tumor origin. Outcomes are likely optimized by maximal safe resection followed by radiation and concurrent Temozolomide. Spinal cord involvement of malignant tumors can significantly adversely affect survival outcomes in such patients.

Glioblastoma (GBM) is the most common primary malignant tumor of the central nervous system (CNS), comprising 46.6% of all CNS malignancies [1]. By anatomic location, the posterior fossa is a relatively uncommon location of GBM. A study of the Los Angeles County Cancer Surveillance Program shows the highest incidence for GBMs was in the frontal lobe, while the lowest incidence for GBM occurred in the posterior fossa (defined as tumors of the ventricular system, brainstem, cerebellum, and CPA (cerebellopontine angle)) [2]. CPA GBMs are exceedingly rare such that to our knowledge, the following case represents the tenth reported case of CPA GBM and the first with a corresponding spinal cord tumor on presentation.

A 43-year-old female presented with a 3-month history of hearing loss in the right ear. A brain MRI in December 2015 showed a right CPA mass deemed to be acoustic neuroma and an expansile cervical spinal cord mass of unknown origin. She did not receive contrast at the time due to her pregnancy. She was lost to follow up and presented in December 2016 with dizziness and bilateral hand numbness that led to a repeat brain MRI with contrast, which showed progression of the brain tumor and areas of enhancement at the C3-C4 levels. (Figure 1). She underwent subtotal resection of the right CPA mass in January 2017 as a gross total resection was deemed unsafe by her surgeon. (Figure 2). Pathology demonstrated the lesion to be a GBM (IDH wild-type, MGMT promoter unmethylated, and absent H3 K27M mutation). The cervical spinal cord lesion was not amenable to biopsy due to the location. After resection, she had further neurological worsening. Neurologic exam showed dysarthria, decreased right hearing, hypotonia of the right arm, bilateral hip flexor weakness, right appendicular dysmetria, upper motor neuron signs on the right, and a wide-based ataxic gait. She received proton beam therapy to both the CP angle mass and the cervical spine mass, as the cervical spine mass was also treated as if it were GBM. She received 60 Gy to the brain tumor in 30 fractions and 50.4 Gy to the spinal cord tumor in 30 fractions with proton beam therapy. She received concurrent Temozolomide at 75 mg/m2 during the 30 fractions of proton beam XRT. Post radiation MRI of the brain and spine showed decreased size of the enhancing right CPA mass; however, there was increased size of the enhancing, expansile mass in the cervical cord extending from C2 to C7 (Figure 3). She initially deferred adjuvant monthly Temozolomide, opting for a holistic approach instead. 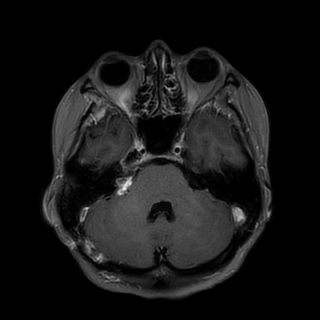 In August 2017, follow-up MRI of the brain and spine showed increased size of both the brain and cervical cord lesions. She started adjuvant Temozolomide at a dose of 200 mg/m2. Following two cycles of adjuvant Temozolomide, she developed new complete right lower motor neuron type facial palsy as well as worsening of her gait ataxia, sensory loss, and appendicular dysmetria. MRI of the brain and cervical spine showed further progression (Figure 4). Bevacizumab was then recommended. However, the patient had rapid clinical decline and died prior to initiation of Bevacizumab. 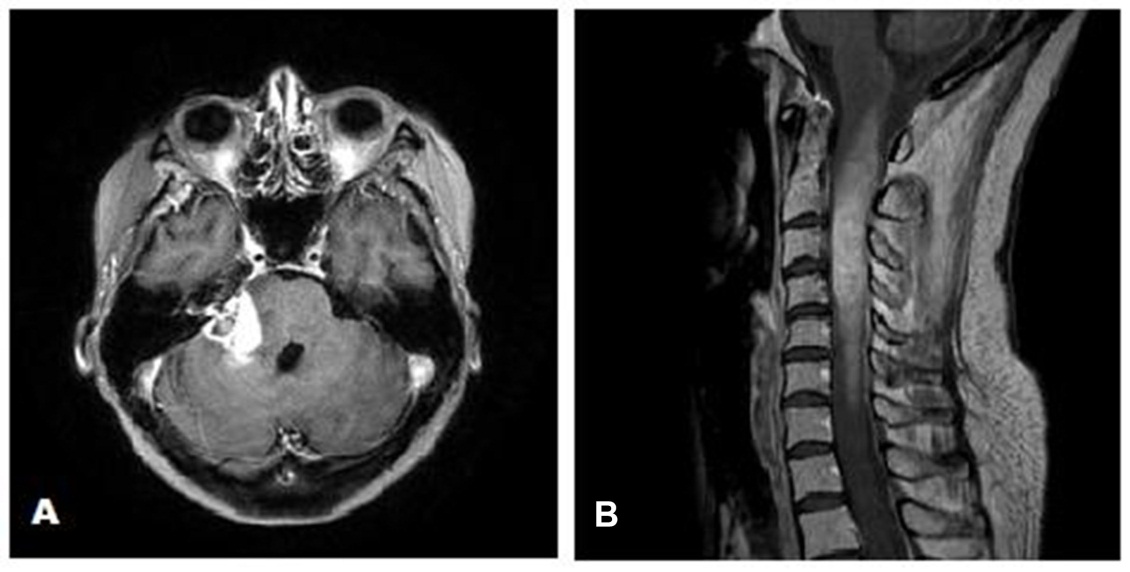 This is the tenth reported case of CPA GBM, and the first with a corresponding spinal cord tumor on presentation. Of the ten cases, this is the second case to undergo administration of Temozolomide, and the first to undergo off label use of proton beam therapy. This case is also unusual due to the longer survival of the patient despite being untreated for a year. A summary of the clinical characteristics of these cases are listed in Table 1. Nearly all cases presented within three months of symptom onset. The most common symptoms were headache, nausea, vomiting, hearing loss, and gait disturbance. The most common signs were ataxia and cranial nerve dysfunction.

Histologically, four of the ten cases were made up by an uncommon variant of glioblastoma known as giant cell GBM, which is seen in only one percent of all GBM cases [5]. Giant cell GBMs are characterized by multinucleated giant cells with abundant cytoplasm, and tend to occur in younger patients. Of the four cases of giant cell GBM, all occurred in patients younger than 30, but this did not render improved outcome. It is unclear why the giant cell GBM variant would have a predilection for the CAP [5].

Primary GBMs arise de novo and render a relatively poor prognosis when compared to secondary GBMs, which develop from lower grade gliomas. Hallmark features of primary GBMs include absence of mutations in IDH1 and TP53. Mutations of IDH1 and TP53 are more often associated with secondary GBMs. The molecular characteristics of the ten cases are listed in Table 2. Testing for IDH1 and TP53 mutations was scant overall. Of the two cases that were tested for IDH1 mutation, both showed absence of this mutation. Of the four cases that were tested for TP53 mutation, two showed absence of this mutation. Overall, further investigation is required to determine the prevalence of primary versus secondary GBMs at the CPA. Methylation of the promotor region of the DNA repair gene, MGMT, renders improved response to Temozolomide. The present case had an unmethylated promoter region. No other cases reported MGMT status. This patient’s tumor was negative for NF1 and NF2 mutations.

The most common tumor of the CPA is vestibular schwannoma, comprising 80% of CPA tumors [6]. Since treatment for vestibular schwannomas and GBMs differ greatly, it is important to distinguish the two radiographically and histologically. Posterior fossa GBMs are characterized by ill-defined tumor margins, peritumoral edema, and moderate to marked ring-like enhancement with gadolinium contrast [7], which was noted in this patient. Vestibular schwannomas are homogenously enhancing rather than ring-enhancing in 67% of one case series [8], cystic schwannomas, however can show ring enhancement. Thus, it is important that gadolinium contrast be administered whenever possible to help distinguish between these two tumor types. Diffusion restriction, when present may suggest central nervous system involvement of lymphoma [9]. These radiographic distinctions may be critical in determining the urgency of obtaining a histologic diagnosis as well as planning future treatments and determining prognosis.

Regarding outcome, three of the ten cases reported survival at three months post-surgery (see Table 1). The first case was of a 15-year-old girl who presented two months after symptom onset with left cerebellar giant cell GBM. She underwent gross total resection and radiotherapy [10]. No other case underwent gross total resection. The second case was of a 69-year-old man with a right cerebellar GBM who underwent subtotal resection, radiotherapy, and chemotherapy with Temozolomide [11]. The third case (the present one) had similar intracranial tumor management to the second case except for the proton beam therapy in our case compared to standard XRT in the second case. Also, the presumed cervical spinal cord GBM complicated management. Proton beam therapy for intracranial GBMs have shown relative sparing of healthy brain tissue, while its safety and efficacy in spinal cord GBM have not been studied [12]. In the present case, post radiation MRI showed decreased size of the intracranial mass but increased size in the cervical cord mass.

We report the tenth case of GBM of the CPA and the first with a corresponding spinal cord tumor on presentation. There are four possible origins of CPA GBM: the cerebellum, brainstem, root entry zone of cranial nerve VIII, and heterotopic glial cells of the leptomeninges. Prognosis does not appear to depend on tumor origin. We recommend maximal safe resection followed by radiation and Temozolomide, although the efficacy of standard XRT compared to proton beam radiotherapy has not been definitively determined. The added component of this patient’s spinal cord tumor likely significantly contributed to her poor outcome.

All authors have contributed equally to the preparation of this manuscript.