Special Issue: Multi-phase Flow with and without Heat Transfer

By the adoption of a drag-buoyancy equality model, analytical solutions were obtained for the drag coefficients (CD) of Taylor bubbles rising steadily in pipes. The obtained solutions were functions of the geometry of the Taylor bubble and the gas volume fraction. The solutions were applicable at a wide range of Capillary numbers. The solution was validated by comparison with experimental data of other investigators. All derived drag formulas were subject to the condition that Bond number >4, for air-water systems.

Taylor bubbles characterize the slug flow pattern of two-phase gas–liquid flows in pipes. These are long gas bubbles with bullet-shaped nose, separated by slugs of liquid filling the entire cross-section of the pipe. This flow pattern occurs in several industrial applications, such as the steam generator of the pressurized water rector, boilers, petroleum industry, desalination processes, etc…

Steam-filled Taylor bubbles can sometimes collapse due to the injection of subcooled water and thus creating a water hammer with destructive consequences. Accident of this type occurred in San Onofre nuclear power plant in 1985 [1].

Two types of Taylor bubble shapes are encountered, in practice, one with a round (hemispherical) leading head and an almost flat trailing end seen in the low viscosity liquids, and the other has a spherical leading and trailing ends, seen in highly viscous liquids as shown in Figure 1. These phenomena were clarified and fully explained by the results of the experiments of Campos and Guedes De Carvalho [2]. The steady state rise terminal velocity of the Taylor bubble in stagnant liquid is given by the following equation of Dumitrescu [3]

where R is the tube radius and g is the acceleration due to gravity. The liquid viscosity was neglected in the development of this equation, because it was based on inertia-dominated regime. Davies and Taylor’s [4] equation was similar to Eq. (1) but the constant was 0.464. 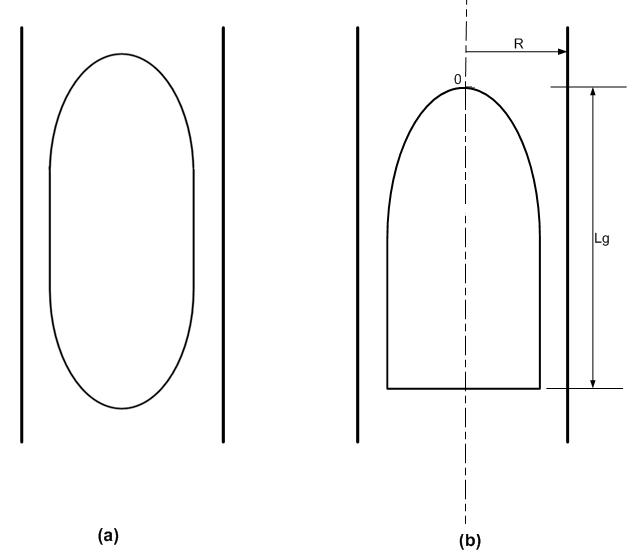 Bretherton [10] derived the following equation for estimating the thickness ($m$) of the thin liquid layer between the inside tube wall and the bubble surface (see Figure 2). 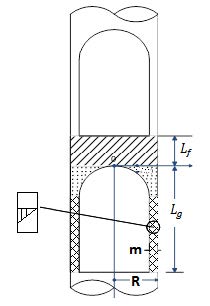 Figure 2 Partitions of the various flow regions around the flat-ended Taylor bubble.

Here $\mathrm{Ca}$ represents the capillary number ($C a=\mu U / \sigma$), where $\mu$ is the dynamic viscosity, $U$ is the bubble velocity, $\sigma$ is the surface tension, and $R$ is the radius of the tube.

The theory of Bretherton [9] was recently modified and extended by Klaseboer et al. [11]. They found that the thickness of the liquid layer ($m$) may reach (≈1/3) of the tube radius at Ca>2.

Baumbach et al. [14] appreciated the balance between the drag and buoyancy forces in their equation (3.1) of motion of the Taylor bubble in pipes. Under certain flow conditions, the liquid slug length $L_{f}$ region contains small spherical bubbles (Brauner and Ullmann [15], Pinto et al. [16]).

The aim of the present work is to present an analytical solution for the drag forces during the rise of Taylor bubbles in stagnant liquids in pipes. Most of the reported studies on Taylor bubble were based on numerical simulations, therefore the present investigation fills a gap in the literature due to its analytical nature.

Klaseboer et al. [11] results showed that Bretherton’s Eq. (3) is applicable at Ca<0.005. The volume of liquid displaced by Taylor bubble is given as follows [12] (Figure 1b and Figure 2)

The second term here represents the volume of the hemisphere forming the bubble nose.

e buoyancy force is given by the following

The classical definition of the drag force on the surface of the bubble or any other object in the flow field, allows us to write the drag as follows

For small values of $m$ as stated earlier, this equation becomes the following

Under steady rise of the Taylor bubble, the buoyancy force becomes equal to the buoyancy force, particularly when the bubble weight is neglected as it is too small to affect the equality between drag and buoyancy. Accordingly Eq. (6) is equal to Eq. (8) and we get the following

From this equation, the drag coefficient becomes

Substituting Eqs. (1) and (5) into this equation and simplifying, we get the following

This equation represents the drag coefficient of a flat-ended Taylor bubble rising in a tube of radius $R$. 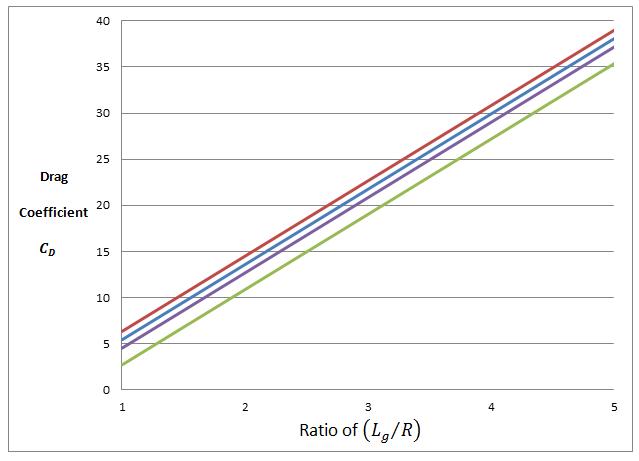 2.6 CD as a Function of Gas Volume Fraction

In two-phase flow, engineers prefer the dependence of the $C_{D}$ on volume fraction $\alpha$ that can be obtained as follows (Figure 2)

This ratio is done on a finite length along the pipeline, in this case $\left[L_{g}+L_{f}\right]$.

Further simplification of this equation gives

Akagawa et al. [17] developed the following correlation for the length of the liquid slug

where $L_{f}$ and $L_{g}$ are in centimeters. Substituting this equation into Eq. (21) yields the following

A range of values of $L_{g}$ was used in this equation to get multiple values of $\alpha$ that were plotted and shown in Figure 4. This plot is useful for engineering applications, particularly where transparent pipes are used. A measure of the bubble length will be conducive to the local value of the volume fraction with the help of this plot for R = 2.54 cm and Ca>2. We cannot go beyond the indicated range of α(0.25-0.) because Taylor bubbles tend to coalesce and form annular flow in pipes (Delfos et al. [18]). 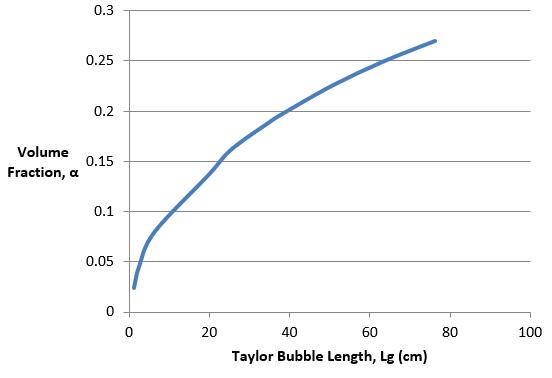 Values of $\alpha$ are obtained from Eq. (25) and plugged into this equation to get $C_{D}$ as shown by the blue curve in Figure 5. 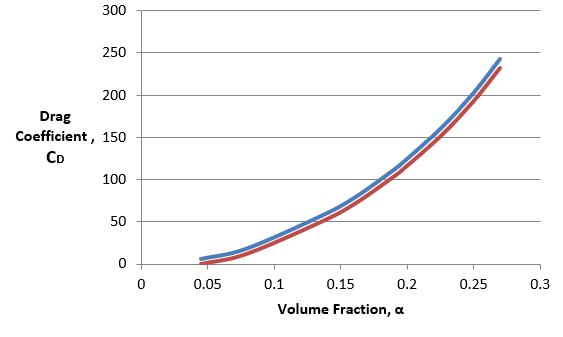 Values of $\alpha$ are obtained from Eq. (25) and plugged into this equation to get $C_{D}$ as shown by the red curve in Figure 5. Notice the smaller values of $C_{D}$ for the stream-lined round-ended bubble as compared to those of the flat-ended ones.

The case of the rise of Taylor bubble in pipe is akin to the rise of the spherical-cap bubble in liquids under gravity. In both cases the bubble rise velocity is independent of liquid viscosity. For Reynolds number >100, the drag coefficient value approaches $C_{D}=2.7$, a value was obtained by many authors (e.g. Wegener and Parlange [19] and Joseph [20]).

Kawaji et al. [21] and Tudose [22] obtained experimental drag data on a 23.4 mm diameter simulated flat-ended Taylor bubble made up from solid plastic and placed in a 25.6 mm inside diameter tube. Load cells were used to measure the drag forces on the surfaces of the solid simulated Taylor bubble. Two different lengths of 7.5 cm and 15 cm simulated Taylor bubbles were used. From the above data we calculated a liquid layer thickness of 0.11 cm, hence we get $(R-m)=0.9141 R$. By following the method of calculation shown in section 2.5 we get the $\mathrm{C}_{\mathrm{D}}$ results shown by Table 1. We should not expect close agreement due to the fact that the drag on a solid surface used by Tudose [22] is certainly greater than that on a bubble surface, but an agreement is existed when both Tudose [22] and us got greater $\mathrm{C}_{\mathrm{D}}$ for larger bubble length.

Table 1 Comparison with the experimental data of Tudose [22].

Table 1 Comparison with the experimental data of Tudose.

Delfos et al. [18] produced a stationary Taylor bubble by introducing controlled amount of air into a down flow of water in pipe. They used two different grids to control the turbulence in the liquid flow. Grid B is at higher Reynolds number than grid A. Our results are compared with Delfos et al.’s [18] in Figure 6 where the agreement was not close but the trend is there, may be due to the indirect prediction of the volume fraction rather than direct measurement. 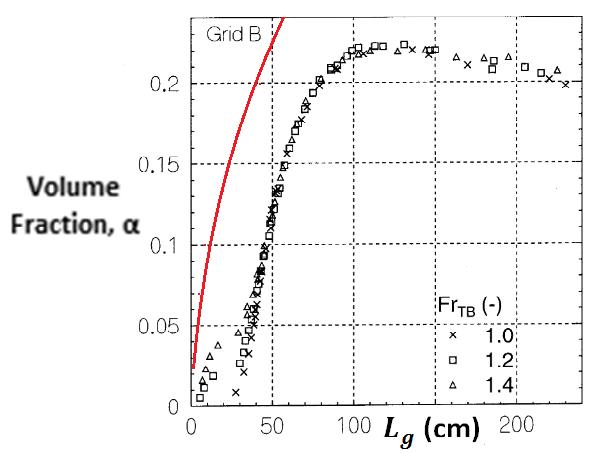 Figure 6 Comparison with the experimental data of Delfos et al. [18]. The continuous line is the present prediction.

Analytical solutions were obtained for the drag coefficients of a Taylor bubble rising in stagnant liquid in cylindrical pipes. The solution was based on a drag-buoyancy equality model. The derived drag coefficient equations were independent of liquid viscosity, but there are borders of applicability with viscosity dependence shown by the ranges of the capillary numbers used. The derived drag coefficient equations were functions of the geometry of the Taylor bubble and the gas volume fraction. The solutions were applicable at a wide range of Capillary numbers. The solution was validated by comparison with experimental data of other investigators.