Cryptic balanced chromosomal aberrations can be an underlying cause of infertility. In 2003 Cockwell and coworkers highlighted the relevance of euchromatic pericentric regions of acrocentric chromosomes that may be a yet ignored genomic region hosting cryptic rearrangements. Here we offer the first follow-up study to further explore this idea. Two specific molecular cytogenetic probe sets were established to elucidate such cryptic rearrangements together with chromosomal heteromorphisms of acrocentric centromeres. In 28 infertile couples and 20 controls, the rate of centromeric heteromorphisms was almost comparable in both groups and one heteromorphism was noted in ~30% of the cases, and two heteromorphisms in ~15% and three heteromorphisms 5%. However, none of the studied groups revealed any cryptic euchromatic pericentromeric abnormalities of the acrocentrics. Nonetheless, in parallel an infertile case with an inv(13)(p12q12.1?2) was uncovered, being not part of the systematically studied group of infertile. As unbalanced products of meiosis with such or similar karyotypes can potentially contribute to abortions, the existence of rare, cryptic pericentromeric euchromatic abnormalities in the acrocentrics thus needs to be still expected in banding cytogenetic diagnostics. Accordingly, this study reflected that suspicious acrocentric short arms in infertile need special attention and further characterization by fluorescence in situ hybridization.

Gross and subtle chromosomal aberrations are known to indulge in adverse consequences for the carriers in their ability to reproduce. Therefore to rule out these possibilities, infertile patients are routinely examined by banding and molecular cytogenetics. Moreover, repeated and/or early abortions in infertile couples can result from gonosomal numerical and/or structural alterations, especially balanced chromosomal rearrangements [1]. The latter may be detected by banding cytogenetics, i.e., characterizable as gross balanced translocations, inversions, insertions, complex rearrangements, or the presence of supernumerary marker chromosomes [1,2,3]. Also, in such cases, fluorescence in situ hybridization (FISH) is recommended to screen for subtelomeric rearrangements that are invisible in banding cytogenetics [4]. Furthermore, mutation in AZF genes on the Y-chromosome, as well as CFTR-gene mutations in chromosome 7 can contribute to male infertility [5].

In 2003 Cockwell and coworkers [6] proposed the presence of other cryptic rearrangements, besides subtelomeric in the euchromatic pericentric regions of acrocentric chromosomes. They reported, a substantial part of infertile couples, specifically those with repeated abortions, may be the carrier of (un)balanced translocations involving chromosomes 13, 14, 15, 21, and 22 with breakpoints in euchromatic proximal long arms. They picked up two times a der(15)t(13;15)(q1?1;q11.2) karyotype among 50 chromosomally normal couples (i.e., 100 persons). Furthermore, three cases were documented with distinct chromosomal heteromorphisms, such as loss of subband 22p11.2 (indicated by loss of D22Z4 sequences) and presence of a der(21)t(Y;21)(q12;p11.2). Even though “a prospective study to include many more couples in which full family studies will be carried out” was announced by the authors [6], to the best of our knowledge, there was no subsequent follow-up study published.

To characterize chromosomal centromeric heteromorphisms of acrocentric short arms, and at the same time to screen for translocations involving the proximal part of acrocentric chromosomes’ long arms, we developed two specific probe sets and tried to close this gap. This probe set was applied in 28 infertile couples and 20 controls studied cytogenetically for other reasons. Parallel to this, one patient, with a cryptic chromosomal rearrangement in the euchromatic pericentromeric region of chromosome 13, not included in the systematic study, was picked up.

In accordance with the local legislation and institutional requirements, ethical review and approval were not required for the present study on human participants as data presented here were obtained during routine diagnosis, which was supported by informed consent from patients.

FISH was executed following standard procedures [10]. To address the problem in the present study, two probe sets covering centromeres and centromere-near regions of all acrocentric chromosomes were developed. The probe sets were deduced from chromosome-specific previously reported subcentromere-specific multicolour-FISH (subcenM-FISH) [10] and cenM-FISH probes sets [11]. Figure 1 illustrates the schemes of the two acrocentrics oriented probe sets together with corresponding typical results in normal chromosome sets. Besides centromeric probes obtained from Prof. Mario Rocchi (Bari, Italy), commercially available centromere-near bacterial artificial chromosome (BAC) probes were also applied, as specified in Figure 1. These probes were labeled by SpectrumGreen, SpectrumOrange, SpectrumRed, Dietylaminocoumarin, and biotin; the latter was detected by avidin-Cyanin5 (for labeling, see also [12]). A homemade probe specific for all acrocentric short arms was also applied in the case of E-1 F [12]. For each probe set and patient, 20 metaphases were evaluated using a fluorescence microscope (Axioplan 2 MOT, Zeiss, Jena, Germany) equipped with appropriate filter sets to discriminate between a maximum of five fluorochromes and the counterstain DAPI (diaminophenylindol). Isis imaging system (MetaSystems, Altlussheim, Germany) was employed for image capturing and processing. 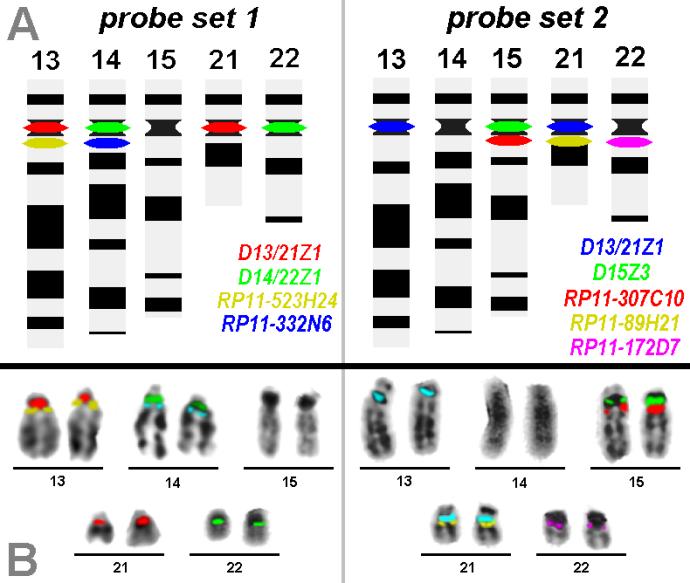 Figure 1 Probe sets 1 and 2 are illustrated schematically in (A), and the typical FISH results obtained after sorting all acrocentric chromosomes in a partial karyogram are represented in (B). Localization of the probes and their names are denoted in parts A beside their corresponding idiograms.

On applying the two probe sets (shown in Figure 1) separately on the 20 control persons, evaluable signal patterns were revealed reliably. Thereafter, the probe set was applied successfully in the 28 infertile couples with 56 individuals. Probe set 1 was solely applied to patient E-1, who was studied separately by FISH.

Table 1 summarizes the FISH results. Cryptic acrocentric pericentromeric abnormalities involving euchromatin could be observed in neither any of the 20 controls nor in any of the 56 tested infertile patients (Table 1). However, while performing this study, a corresponding half-cryptic acrocentric pericentromeric abnormality was detected in one case with unexplained infertility: here a karyotype 46,XX,inv(13)(p12q12.1?2) was found (Figure 2). 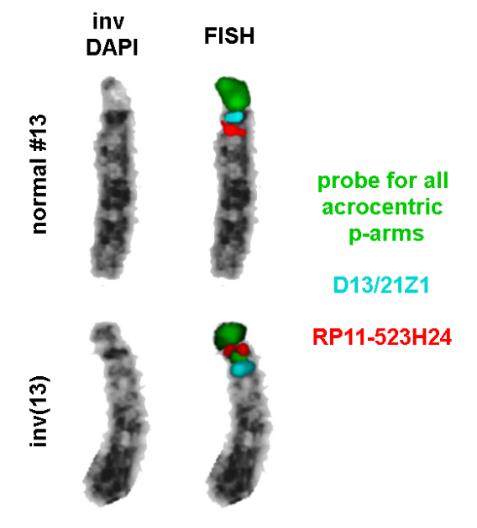 Figure 2 Probe set 1 was employed in the case of E-1 F for chromosome 13 and accompanied by a homemade probe for all acrocentric p-arms. Thus, the inv(13)(p12q12.1?2) could be clearly characterized.

Figure 3 summarizes the distribution of heteromorphisms per chromosome. Interestingly, compared to the control group, the frequency of heteromorphisms in chromosome 15 was found to be lower in the infertile group, while the other ones – considering the relatively small case numbers in both groups – were more or less equal. 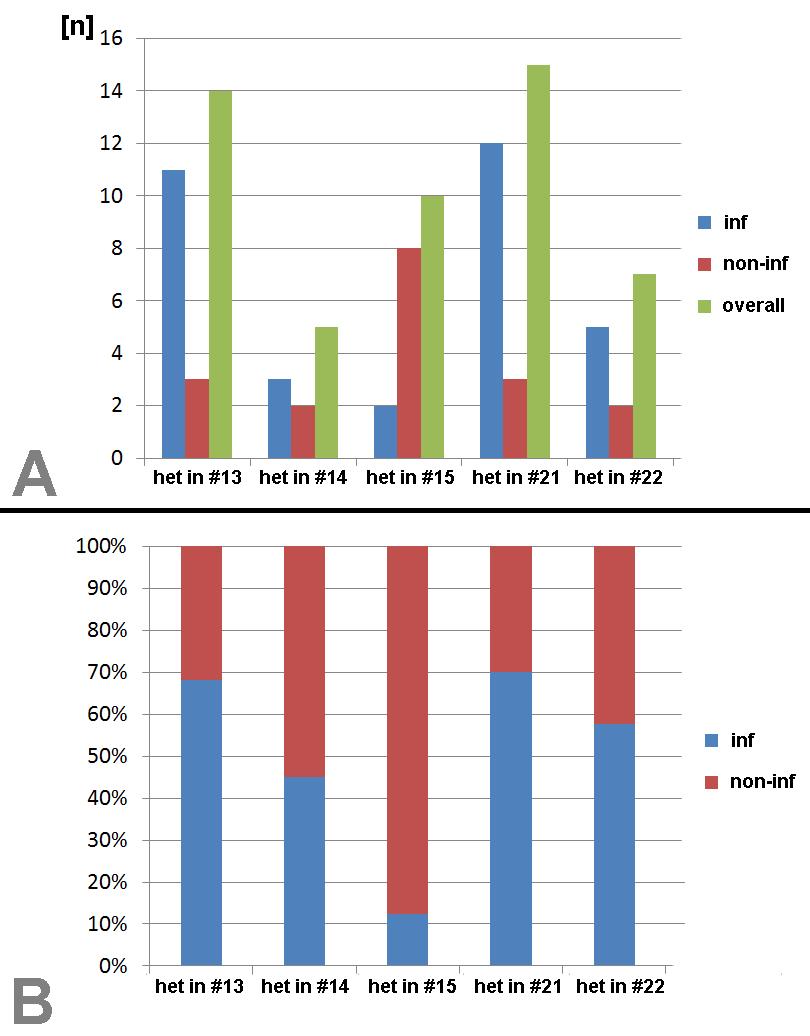 Figure 3 Distribution of heteromorphisms per chromosome is represented in absolute numbers (A) and in relation to each other (B). Abbreviations: het = heteromorphism; inf = infertile; n = number of cases; # = chromosome.

In 2003 Cockwell and coworkers [6] reported that around 2-5% of the infertile or persons in couples with repeated abortions might be carriers of a cryptic pericentromeric euchromatic abnormality in the acrocentrics. These statistics were derived from a pilot study with 100 participants, in which three had a chromosomal heteromorphism and two an unbalanced der(15)t(13;15).

The present study failed to provide any hint on cryptic pericentromeric euchromatic abnormalities in the acrocentrics. Though this preliminary work encompasses a small study population, it is also noteworthy that, to the best of our knowledge, since 2003, no cryptic pericentromeric euchromatic abnormality for the acrocentrics has been reported in the literature. Nonetheless, being rare, case E-1 F with inv(13)(p12q12.1?2) supports the existence of such incidences. This rationalizes the necessity to explore the acrocentric short arms and pericentric regions, as unbalanced products of meiosis are possible, which potentially could result in abortions.

Even though being rare, cryptic pericentromeric euchromatic abnormality in the acrocentrics needs to be considered in banding cytogenetic diagnostics. It is highly recommendable to investigate the suspicious short arms of acrocentrics in cytogenetic preparations of infertile persons by FISH. Furthermore, as recently highlighted, proper elucidation of the etiology of chromosomal rearrangements on cytogenetic bases often aid in the correct interpretation of the results of modern high throughput diagnostic schemes [16]. Accordingly, data from molecular karyotyping of abortions with centromere-near euchromatic copy number variations of acrocentric chromosomes should also indulge in parental follow-up studies for cryptic inversions, translocations, or other rearrangements by cytogenetics and FISH.

TL set up study design. AW performed the banding cytogenetic analyses. AA-R did probe set development. ST, SK, NP, LP, MZ, and AA-R did FISH-experiments and pre-evaluation. KR did molecular genetic analyses. Final evaluation of FISH-results was done by ST and MZ. TL led together all data and did final assessments and drafted and wrote the paper. All authors read and approved final version of the paper.