Background: Fetal exome sequencing is becoming a crucial modality for genetic investigation whenever fetal malformations are documented in the context of normal chromosomal microarray analysis (CMA). When ultrasound findings are non-specific, the robustness of exome sequencing may be the only way to achieve a molecular diagnosis during pregnancy.

Case: We describe a case of multiple non-specific fetal findings with the eventual diagnosis of fetal Kabuki Syndrome by exome sequencing.

Conclusions: This case stresses the importance of fetal exome sequencing when sonographic fetal abnormalities are visualized, without any specific candidate diagnosis. The multi-organ findings raised the index of suspicion; exome sequencing was performed following a normal CMA. Most Kabuki Syndrome patients have a recognizable facial dysmorphism that generally cannot be observed prenatally.

Teaching Points: 1. Syndromes that are easily characterized postnatally, such as Kabuki, may be very difficult to diagnose prenatally using ultrasound alone. 2. Fetal exome sequencing may reveal the molecular diagnosis when non-specific findings are encountered by sonography.

The complexity of prenatal diagnosis stems from our inability to directly examine the patient. Fetal malformations observed by ultrasound often prompt genetic investigation, and couples may be counseled on the basis of ambiguous findings, such as increased nuchal translucency or non-specific fetal malformations. Traditional G-banded chromosome analysis for evaluation of fetal malformations identifies aneuploidy or unbalanced chromosomal rearrangements in up to 18-35% of such cases [1,2]. Chromosomal microarray analysis (CMA), which enables the diagnosis of microdeletion/duplication syndromes, contributes an additional 2.5-6% of diagnoses, depending on the clinical indications [1].  Fetal exome sequencing may contribute 8.5-10% additional diagnostic yield [3,4] but even as high as 80% in small cohorts, and thus should be considered when other investigations are negative [5,6]. The time frame of ongoing pregnancy presents a major challenge. Exome sequencing has the advantages of rapid turnaround of results, increased robustness of variant calling and interpretation, and steadily declining cost, making this option a very attractive modality for genetic testing of the fetus, especially in the context of unclear sonographic findings. Here we present a case of nonspecific fetal sonographic findings that were eventually provided a diagnosis by fetal exome sequencing.

A 28 year old pregnant woman was referred for genetic evaluation upon diagnosis of several fetal sonographic findings. She and her husband were healthy, of Ashkenazi Jewish ancestry. They had a healthy offspring and this was their second pregnancy. Pre-gestational screening tests, according to the recommendations regarding their ancestry, were all negative. Using maternal serum markers and nuchal translucency measurement, the integrated risk for Down Syndrome was very low (1:10,000). Second trimester early anomaly scan at 15 weeks demonstrated a slightly smaller than normal left cardiac ventricle, suspected agenesis of the left kidney and right double collecting system. A second early anomaly scan raised suspicion of aortic coarctation and demonstrated a small, echogenic left kidney. Fetal echocardiography demonstrated both a small left ventricle and aortic coarctation. After genetic counseling, amniocentesis was performed. CMA was normal (Gene by Gene’s GxG ComprehensiveArray v1.0 BeadChip). The midtrimester anomaly scan at 23 weeks confirmed the above cardiac findings (Figure 1) as well as an aberrant right subclavian artery. In addition, this scan revealed other fetal findings, including small pelvic kidneys with unilateral renal cyst (Figure 2), low set ears, and fetal biometry consistent with a symmetrically small fetus (i.e. measures >1 standard deviation from the mean parameters for gestational age). Fetal exome sequencing was then recommended and trio-exome was performed by Centogene laboratories. It demonstrated a de novo nonsense mutation c.5707C>T; p.Arg1903Ter in KMT2D, compatible with Kabuki Syndrome. This variant creates a premature stop codon and was previously described as disease causing by Miyake et al in one patient [7] and in one fetus by Normand et al [8]. It is classified as pathogenic according to ACMG (American college of medical genetics) recommendations. This finding was confirmed by Sanger sequencing. Prognostic information regarding variable expression of Kabuki Syndrome, including risk of intellectual disability and structural anomalies, not all of which can be diagnosed by sonography scanning alone, was a critical aid in the couple's decision to terminate the pregnancy. Termination of pregnancy was performed at 28 weeks after approval of a specific committee according to the state law. Recurrence risk was estimated to be low. 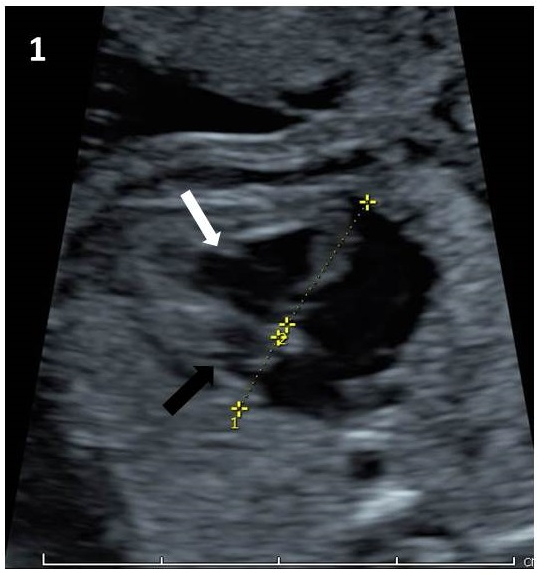 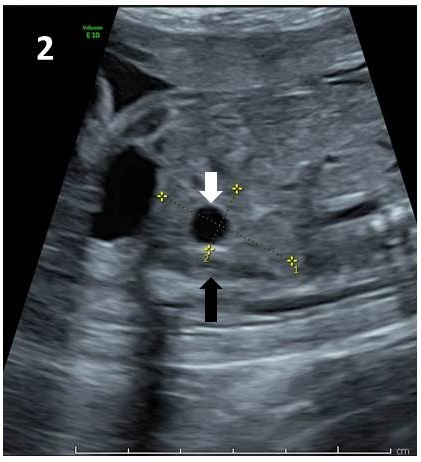 We report of a case in which a family with a fetus with multiple non-specific fetal abnormalities only received a definitive diagnosis through fetal exome sequencing. Kabuki Syndrome is a rare multi-system disease that is mostly caused by deleterious mutations in the KMT2D gene (encoding H3K4 methyltransferase 2D, and in the minority of patients, in KDM6A, which encodes H3K27 demethylase) [7]. These proteins are important for the chromatin state and transcription activation that are critical in early vertebrate development. Their reduced expression results in repressed transcription and thus multi-organ abnormalities [9]. Kabuki Syndrome is characterized by variable degrees of intellectual disability, seizures, vision and hearing problems, minor skeletal abnormalities, and growth deficiency. Other findings may include cardiac malformations, genitourinary anomalies, cleft lip and/or palate, gastrointestinal anomalies including anal atresia, ptosis and strabismus, and widely spaced teeth and hypodontia [10]. The most striking feature of the syndrome is the unique facial dysmorphism that includes elongated palpebral fissures with eversion of the lateral third of the lower eyelid, arched and broad eyebrows, short columella with depressed nasal tip and large, prominent, or cupped ears [10]. Persistence of fetal fingertip pads is also a unique, though not pathognomonic, feature of Kabuki Syndrome. This gestalt makes the postnatal clinical diagnosis of Kabuki Syndrome quite clear in most cases, followed by KMT2D sequencing or exome sequencing, since only the minority of cases are result of KDM6A mutations [11]. Even in cases of clinical features of Kabuki Syndrome, some differential diagnosis may be considered, especially CHARGE Syndrome, but there may be other multi-organ candidate syndromes.  Naturally, most of the unique features of Kabuki Syndrome cannot be visualized prenatally. This case highlights the importance of fetal exome sequencing when fetal abnormalities are visualized but do not suggest a specific candidate diagnosis. Otherwise, when cardiac malformations are observed, next generation sequencing panel may be advised, as described by Hu et al [12]. They diagnosed two fetuses with Kabuki Syndrome by targeted 77-gene panel following the observation of cardiac and renal malformations in these fetuses. A post-mortem genetic analysis is another way to approach fetal malformations as described by Quinlan-Jones et al [13]. When malformations are severe, the couple might opt for termination of pregnancy followed by genetic investigation, assuming grave prognosis anyway or even health conditions that are non-compatible with life. They describe a cohort of 27 fetuses that were terminated following a severe sonographic phenotype. Two of which (one with complex heart malformation and cleft palate; the other with Hydrops fetalis, cleft palate, micrognathia and dysplastic kidneys) had a post-mortem diagnosis of Kabuki Syndrome by exome trio.

In our case, some of the findings would not be termed fetal malformations (pelvic kidneys and mild growth restriction) but their association with multi-organ findings raised the index of suspicion. 3D sonography may allow, in the future, identification of the characteristic fetal facial dysmorphism of Kabuki Syndrome, as was described in some cases of Cornelia de Lange Syndrome and others [14,15].

Regarding the specific variant found in the fetus described, its pathogenicity was consolidated by observing how it creates a premature stop codon in a gene with loss of function intolerance (pLI=1). It was described before as disease causing [7,8] and is not described in healthy population cohorts like ExAC.

Of note, there are some limitations of whole exome sequencing in the prenatal setting. They include the possibility of finding variants of uncertain clinical significance which pose stress without a clear diagnosis. Another issue is the potential for clinically significant secondary findings like late onset diseases. All of these issues emphasize the importance of skilled genetic counseling prior to undergoing prenatal exome sequencing.

The authors thank Mrs. Sara Cohen for the language editing and also to the support of the Adler Chair for Pediatric Cardiac Research, Sackler School of Medicine, Tel-Aviv.

These authors contributed equally to this work.