United Kingdom guidelines recommend single embryo transfer (fresh or cryopreserved) in the first full assisted conception cycle for women under 40 years most at risk of having twins. Based on a recent randomized clinical trial for women aged 36 to 40 years, the hypothetical effect of preimplantation genetic testing for chromosome aneuploidy was extrapolated to single transfer of every morphologically transferable embryo available from a full cycle. Offering testing to every woman seems likely to result in fewer clinical miscarriages and transfer procedures overall; however, due to the exclusion of viable embryos from transfer caused by false abnormal test results, there are also likely to be fewer women with a delivery. The appropriate unit of benefit for assisted conception is live birth and any additional expense of a PGT-A test cannot be considered to be cost-effective when it results in fewer women with a delivery from a full cycle. A minority of women are likely to benefit by avoiding miscarriage due to chromosome aneuploidy; however, gauging willingness-to-pay is likely to be complex and to depend on who is making the decision, and how they are counselled.

Preimplantation genetic testing for chromosome aneuploidy (PGT-A) continues to be a topic for heated debate [1,2]. The recent report of the European Society of Human Reproduction and Embryology (ESHRE) study into the evaluation of oocyte euploidy by microarray analysis (ESTEEM) [3] for women aged 36 to 40 years with good prognosis affords an opportunity to explore further the usefulness of PGT-A and gain some insight for this age group with respect to offering testing to every woman. Following publication of the trial pilot study [4] it seemed likely that the approach compared favourably with the in-situ hybridization technique, although a substantial number of euploid zygotes were likely to be excluded incorrectly, and it was argued that vitrification and serial transfer without testing are likely to give patients the best chance for a successful pregnancy [5].

The ESTEEM trial has several salient features to be considered. Testing was performed on polar bodies using the Agilent 24Sure microarray system, a platform which is no longer available and currently most testing is likely to be done at the blastocyst stage using next generation sequencing. Up to two embryos were transferred when available and more embryos were available for transfer in the control group and dual embryo transfer was more often performed. The authors acknowledge that “it could be argued that this may have introduced a bias and favoured the control group by increasing the pregnancies in the fresh transfer cycle, while on the other hand it may have been a disadvantage to the control group, because single embryo transfer would have allowed for good quality embryos to be cryopreserved and transferred later only to add to the cumulative birth rate”. It is also pointed out that cumulative outcome data were limited to one year, which may have introduced a negative bias to the control group; at the end of the study substantially fewer cryopreserved embryos were available in the PGT-A group (97 vs 284), but the number of women in each group with spare embryos who had not had a live birth is not specified.

A model published previously [6] is used here to extrapolate what the outcome might be if embryos are transferred one at a time in both groups until one delivery with a live birth occurs or until all the embryos are used (a full cycle). Multiple births is recognised to be an important risk to the health and welfare of children born after assisted conception and can be effectively reduced by transferring only one embryo to those women who are most at risk of having twins [7]. In the United Kingdom (UK), the current National Institute for Health and Care Excellence (NICE) guideline covering diagnosing and treating fertility problems in the UK recommends single embryo transfer (fresh or cryopreserved) in the first full IVF cycle for women under 37 years, and if there are one or more top-quality embryos for women aged 37 to 39 years [8].

With perfect diagnostic accuracy and freeze-thaw survival, a priori the cumulative live birth rate is the same with and without testing. The model estimates the numbers of live birth events, clinical miscarriages and embryo transfer procedures when the diagnostic accuracy and freeze-thaw survival rates are varied from 100% for different numbers of available morphologically transferable embryos without testing. The probabilities for single embryo transfer were estimated from the ESTEEM report using the approach detailed in Appendix 1. With a prevalence of non-viable morphologically transferable embryos of 87.0%, the likelihood of an abnormal test result correctly predicting no live birth event was 92.5% and the likelihood of a normal test result correctly predicting a live birth event was 22.9%.

The results per 100,000 women and different numbers of morphologically transferable embryos are summarised in Figure 1. Considering only up to one transfer attempt, when more than one morphologically transferable embryo is available there are more live birth events with PGT-A, which indicates that PGT-A is more effective than a conventional morphological assessment alone to select a viable embryo. However, including the transfer of all available cryopreserved embryos, the cumulative live birth rate is inferior with PGT-A due to the exclusion of more viable embryos with false positive test results than due to cryopreservation attrition, although with fewer clinical miscarriages and transfer procedures. 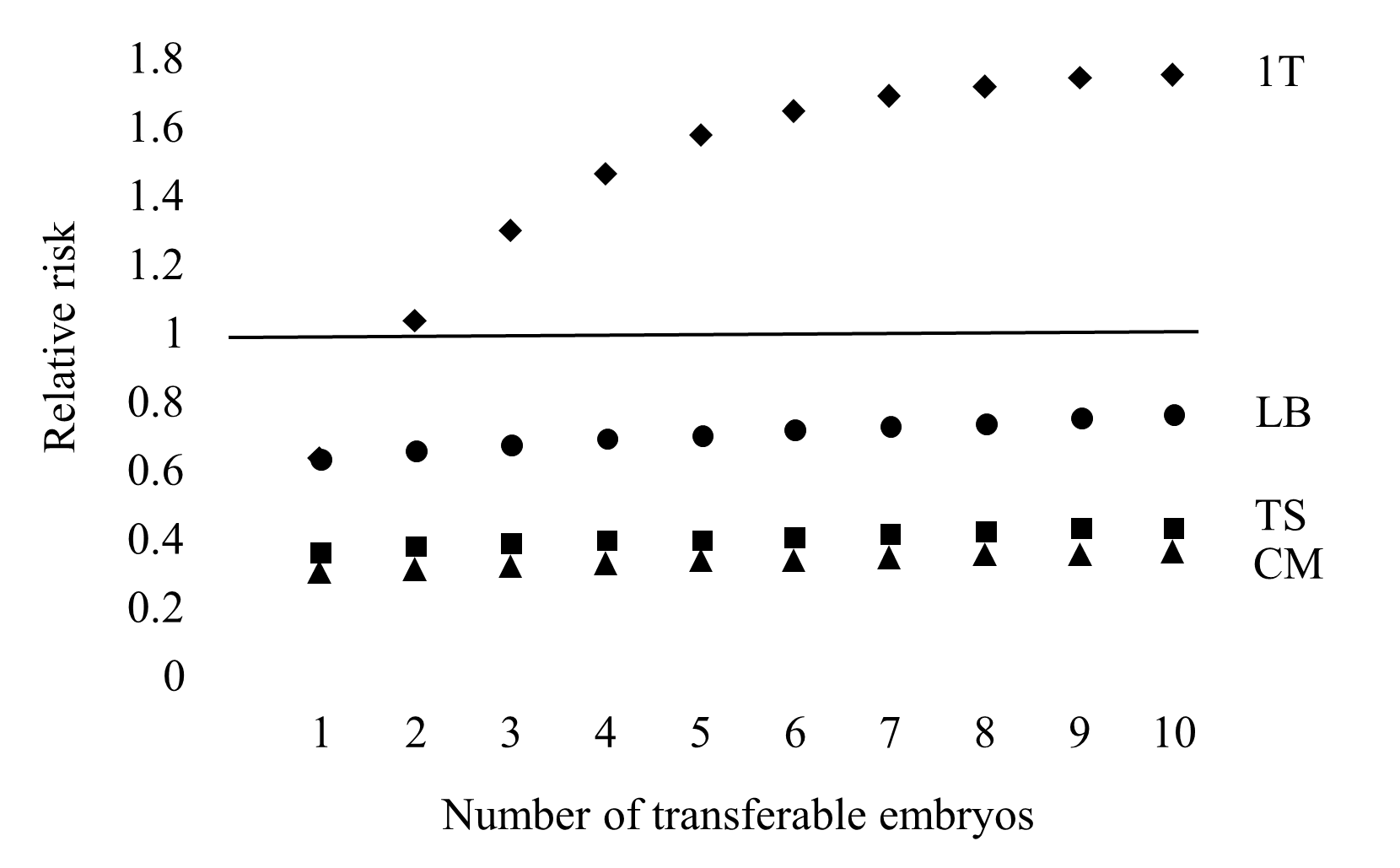 Outcome measures which incorporate first (fresh or warmed) as well as subsequent cryopreserved embryo transfer (cumulative rate) rather than success rates based on only a first transfer is recognised to be more appropriate for decision making regarding the efficacy of treatment and cost [9]. Cost-effectiveness analysis which uses measures that consider extra cost in relation to extra effect are recognised to be proper ways of reporting the results [10]. The appropriate unit of benefit for assisted conception is live birth and any additional expense of a PGT-A test cannot be considered to be cost-effective when it results in fewer deliveries from a full cycle.

The ESTEEM trial was designed to evaluate if PGT-A could increase the chance of having a baby within one year and found that it does not. Even this finding may be optimistic; it has been argued previously that trials which do not include all available morphologically transferable embryos from a stimulated cycle are likely to be biased for live birth in favour of testing, although with a marginal effect on the miscarriage rate [11]. The clinical miscarriage rate was a secondary outcome of the ESTEEM trial and fewer women had a loss in PGT-A group (7% vs 14%); therefore, it seems that only around 1 in 14 (7%) women might avoid a clinical miscarriage if testing is available for this age group. Gauging a couple’s willingness-to-pay to avoid miscarriage and reduce treatment time is likely to be complex and to depend on who is making the decision, and how they are counselled [12].

Since the inception of the ESTEEM trial the landscape of preimplantation genetic testing has changed, and currently most testing is likely to be done at the blastocyst stage using next generation sequencing. A recent analysis of this approach concluded that for women with more than one morphologically transferable embryo, PGT-A reduces healthcare costs, shortens treatment time and reduces the risk of failed embryo transfer and clinical miscarriage [13]. The primary outcome of that study was the cost to achieve a live birth or exhaustion of an embryo cohort obtained from a single oocyte retrieval. A number of reasons for caution regarding that study have been expounded previously [14]. Compared to the ESTEEM trial estimated predictive values of 92.5% and 22.9% for an abnormal and normal test result respectively for single embryo transfer, the corresponding values were estimated to be 100% and 60%. Only by assuming that there were no false abnormal test results was it possible to achieve parity for the cumulative live birth rate with and without testing; however, there is no extra effect to assess cost-effectiveness. It has been shown previously that a marginal extra effect for live birth is possible with a fresh and frozen transfer strategy (but not with a freeze-all strategy) provided that fewer viable embryos are excluded incorrectly due to the test than are lost through attrition associated with cryopreservation [6,12]; however, the extra effect was negated in the model scenario where the predictive values were 97.2% and 62.5% for an abnormal and normal test result respectively, and assuming a 94.5% warming survival rate.

In conclusion, caution should be advised regarding offering PGT-A to every woman, and it should not be expected to improve the chance of having a baby when taking into account every morphologically transferable embryo from a stimulated cycle. A woman adding an embryo selection genetic test to a conventional morphological assessment is most likely entering into a lottery to avoid miscarriage and/or reduce treatment time, which is likely to offer no advantage to most women and the possibility of an inferior live birth outcome for some; gauging a couple’s willingness-to-pay is likely to be complex and to depend on who is making the decision, and how they are counselled. The appropriate unit of benefit is livebirth and any imperfect test used to augment the selection of morphologically transferable embryos should be expected to result in fewer women with a delivery from a full cycle, and therefore should not be considered to be cost-effective even if it is less expensive overall.

The following additional material is uploaded at the page of this paper.

The author is responsible for the content and writing of the paper.