In this study, a PoC (Proof of Concept) of a possible biomass valorization of flax and camelina oilseed press cakes was presented. Biocatalyzed hydrolysis of residual oils and proteins extracted from these wastes was studied. The biotransformation of oils was performed using commercial immobilized lipases, including Amano PS, Amano AK, and Candida Antarctica Lipase B (CALB). Acylglycerols were partially or fully hydrolyzed using Amano PS and AK. Triglycerides were not hydrolyzed by CALB, which behaved differently. Enzymatic hydrolysis of the proteins extracted from these cakes was performed using commercial proteases, including Amano Protease P and Amano Protease M. This was the first study to quantify the amino acids in the reaction products. The results were also compared to the hydrolysates obtained using 6 M HCl. Some differences were observed in the amino acid profiles depending on the enzyme used and the protein sample.

Oilseeds are industrially relevant crops, and the valorization of their residues is significant [1]. After completing the steps of oilseed pressing, about 60% of waste by-products are formed as a cake, which is mainly used for feeding livestock or energy production [2,3]. These by-products are important as they contain valuable substances, such as lipids and proteins, which can be transformed into high-added value materials. Biocatalytic methods can be used for converting biomass residues. The conventional methods used for the hydrolysis of residual oils and proteins from the oilseed cakes have certain disadvantages, such as the risk of thermal degradation or low selectivity [4,5,6]. In this field, enzymes are a useful alternative as they can efficiently catalyze the biotransformation of oils and proteins under mild reaction conditions [7].

Lipases are widely used in various reactions, including the hydrolysis of oils and fats, because of their high activity, regioselectivity, and stability in different experimental protocols [8,9]. Several studies have investigated the immobilization of lipases to obtain more stable and active biocatalysts compared to their free forms [8,10,11,12]. Regarding the hydrolysis of proteinaceous substances, enzymatic methods based on the use of proteases can be used to obtain hydrolysates with better-defined chemical and nutritional characteristics [13].

In this study, we assessed the feasibility of using three commercially available lipases and two proteases for the biocatalytic conversion of the oil and protein components obtained from the waste of Flax (Linum usitatissimum) and Camelina (Camelina sativa) oil seed press cakes. The effects of different enzymes and the characteristics of the hydrolysate were investigated.

As reported in another study [14], residual oils from flax (FCO) and camelina (CCO) cakes are rich in unsaturated fatty acids, which are interesting starting materials to synthesize fragrances [15,16,17], lubricants [18,19,20], and monomers for producing bioplastics [16,21]. Thus, the hydrolysis of these oils was evaluated, and biocatalyzed hydrolysis was performed with three immobilized lipases. Among the available enzymes, immobilized Candida Antarctica Lipase B (CAL B), Amano PS lipase, and Amano AK lipase were selected as catalysts. The reactions were performed in a buffer/n-hexane mixture at 40 °C and stopped after 24 h.

The oils and products collected after the workup procedure were characterized by performing an analysis using the HPLC-ESI-Q-TOF/MS technique (Figure 1 and Figure 2). Determining high-resolution tandem mass spectra in the positive and negative modes allowed the separation of free fatty acids, monoacylglycerols, diacylglycerols, and triacylglycerols and their identification based on their CID mass spectra [22,23]. The chromatographic profile of both oils was characterized by the presence of glycerol-lipids, mainly containing linolenic and linoleic acids, which matched the findings of other studies [23,24]. Interestingly, lipases used in this study showed a different behavior toward the fate of diacylglycerols (DAGs) and triacylglycerols (TAGs) as explained below. 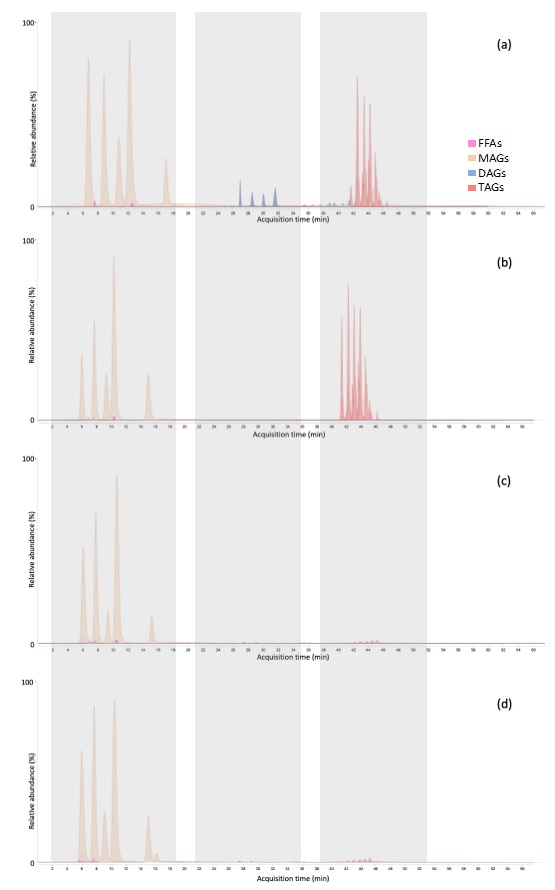 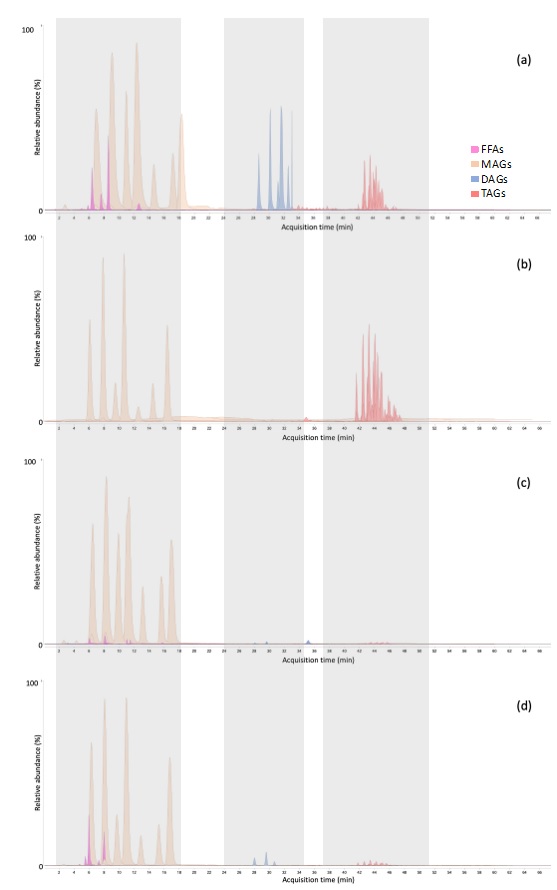 While the immobilized lipases AK and PS catalyzed partial or complete hydrolysis of the oils to free fatty acids (FFAs) and monoacylglycerols (MAGs), CAL B did not act on TAGs. This might be due to the differences in the properties of the three enzymes. Lipases are most effective at oil-water interfaces; this phenomenon is commonly called interfacial activation and is responsible for changing the conformation of mobile lid structures. Thus, many lipases are stable in organic solvents and used in ester formation or transesterification and hydrolysis reactions. However, CAL B lacks a distinguishable lid structure and, thus, shows weak interfacial activation, which makes its nature borderline between an esterase and a lipase [25]. CAL B is mainly used for the esterification step after the hydrolysis of oils and fats [26,27]. Under the experimental conditions used in this study, immobilized AK was the most efficient catalyst.

Protein hydrolysates are widely used as nutritional supplements, functional ingredients, and flavor enhancers in foods, as well as biostimulants in horticulture [13,28]. Evaluating the nutrition and biochemistry of proteins requires reliable methods, such as HPLC, for analyzing the composition of amino acids [29]. The production process and the source of the protein strongly affect the chemical characteristics of the hydrolysate. Hydrolysis of proteins under chemical conditions usually involves an acidic or alkaline environment and high temperatures. Chemical hydrolysis attacks all peptide bonds of proteins, leading to a high degree of hydrolysis and the deconstruction of several amino acids; for example, tryptophan is usually destroyed, while cysteine, serine, and threonine are partially lost [13]. The racemization of the amino acids under these working conditions is a critical aspect. Proteolytic enzymes hydrolyze proteins under mild reaction conditions (e.g., temperature <60 °C) and often target specific peptide bonds. Production of hydrolysate based on enzymatic hydrolysis is also more eco-friendly due to the lower energy requirements and carbon dioxide emissions [13]. Several studies have performed the partial or total hydrolysis of proteins released from Flax or Camelina seeds and determined the corresponding composition of amino acids [30,31,32]. However, the treatment and characterization of proteins isolated from waste cakes have not been performed.Hence, the biocatalytic conversion of proteins extracted from flax and camelina cakes was investigated using two proteases from Amano, including Protease P, a semi-alkaline protease, and Protease M, a fungal acidic and neutral protease preparation. The biocatalyzed hydrolysis was performed using 0.1 M phosphate buffer at pH 7, with an enzyme/substrate ratio of 1:2 at 35 °C for 24 h. The obtained hydrolysates were characterized quantitatively for the amino acid content and qualitatively for the residue peptide content and compared to the hydrolysate obtained with HCl (6 N). The results are shown in Figure 3 and Figure 4. 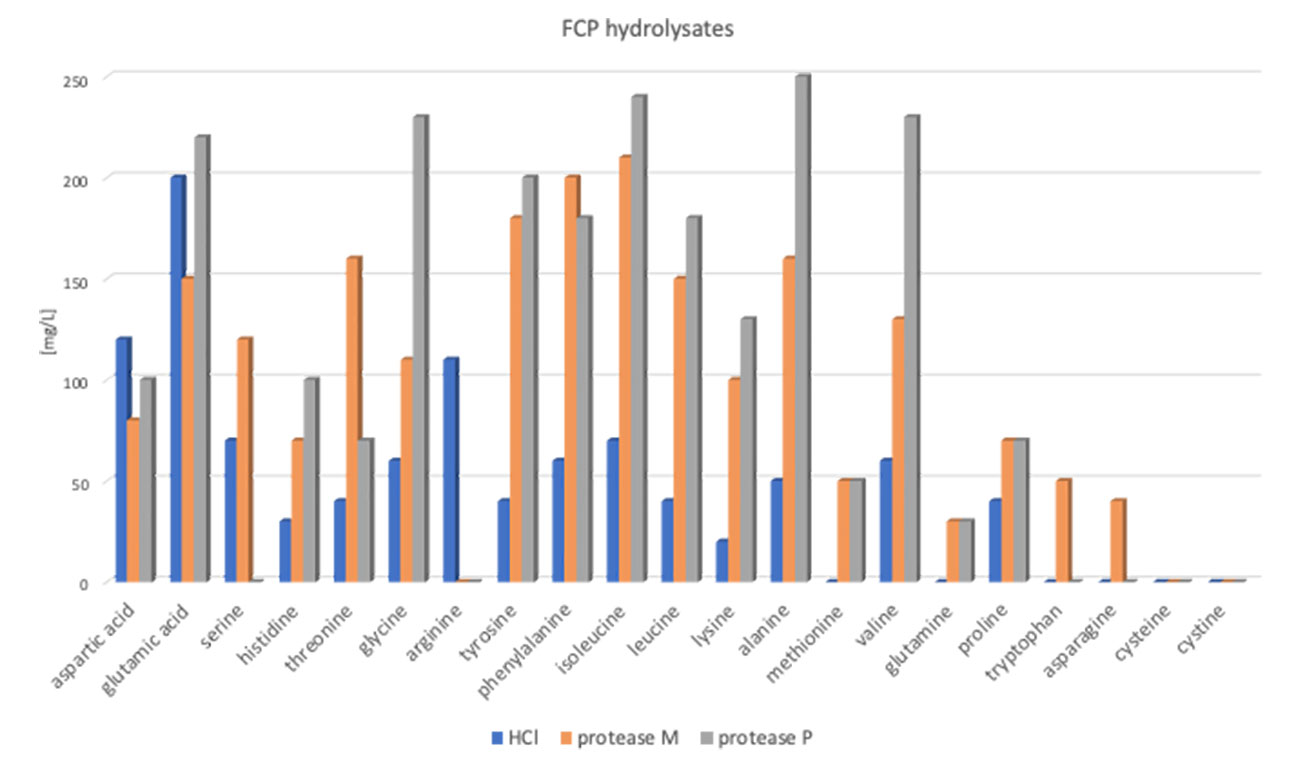 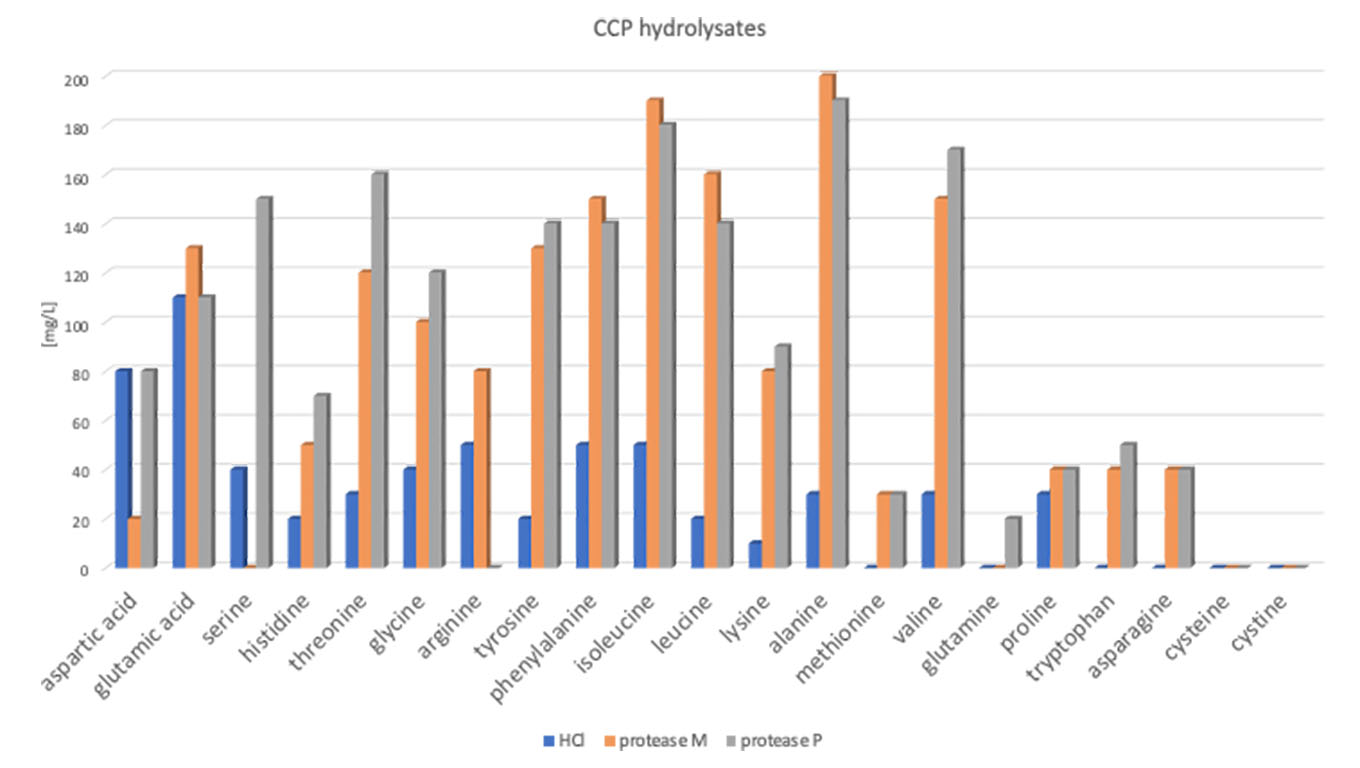 Almost all investigated amino acids were present in the samples, although some differences were found between the hydrolysates obtained using the two enzymes from FCP and CCP. Arginine was absent in both FCP samples. Serine, tryptophan, and asparagine were obtained through the hydrolysis of FCP catalyzed by Protease M but not by protease P. In CCP hydrolysates, serine and glutamine were obtained with Protease P, and arginine was obtained with Protease M. The samples obtained by chemical hydrolysis under acidic conditions did not contain methionine, glutamine, tryptophan, and asparagine. Cysteine and cystine were absent in any FCP and CCP hydrolysate samples. A preliminary analysis performed for the presence of peptides allowed the determination of FCP and CCP composition as three-six and three-four units, respectively. Additionally, a semiquantitative evaluation of the concentration of peptides performed under the same experimental conditions showed that the content in the Protease M hydrolysate was higher than that in the Protease P hydrolysate. The same trend was observed in the FCP hydrolysate samples compared to that in the CCP hydrolysate samples. The recovery of oligopeptides and the evaluation of their biological activities need to be performed in future studies.

To summarize, the biocatalyzed hydrolysis of residual oils and proteins from oilseed press cakes was performed under mild reaction conditions using commercially available lipases and proteases to obtain free fatty acids and amino acids. Immobilized lipase Amano AK and PS led to the partial or complete hydrolysis of diacylglycerols and triacylglycerols present in the oil mixture extracted from the press cakes. However, triacylglycerols were not hydrolyzed by the immobilized CALB. Protein hydrolysates were obtained through the biotransformation of the protein fractions extracted from press cakes using Protease P and Protease M. The amino acid content of these hydrolysates was quantitatively analyzed and compared to that obtained by hydrolysis using 6 M HCl. The results of the analysis showed that the investigated amino acids were present in almost all residues of flax and camelina press cakes; only cysteine and cystine were absent in the hydrolysate samples. This study showed that press cake waste valorization could be performed by enzymes. Therefore, future optimization of these biocatalytic methods using lipases and proteases can pave the way for large-scale application (e.g., under flow conditions).

This study was financially supported by research funding from the University of Pisa, Italy (Fondi di Ateneo), and by the Studio di Consulenza Scientifica (SCSOP), Sirtori (LC), Italy.