The process of light-induced C-H oxygenation is of high interest as it can be used for the construction of oxygenated compounds. Herein, we report a mild and general method for the efficient synthesis of aromatic ketones following the process of metal-free C-H oxygenation. With air as the oxidant, high functional tolerance was demonstrated, and the desired ketones were obtained in moderate to excellent yields at room temperature (25 oC). Mechanistic studies suggested that the oxidative transformation potentially occurred via an electron transfer pathway.

Aromatic ketones are important structural motifs that are widely present in an array of pharmaceutically active molecules and natural products (Figure 1) [1,2,3,4,5,6,7]. Therefore, the construction of this valuable structural motif has drawn tremendous attention from synthetic chemists. To date, numerous strategies have been developed for the synthesis of the oxygen-containing skeletons [8,9,10,11]. Among the many types of synthetic methods developed over the years, the direct C-H oxygenation method is the most important, as C-H bonds are present in abundance in organic compounds [12,13,14,15,16,17,18]. 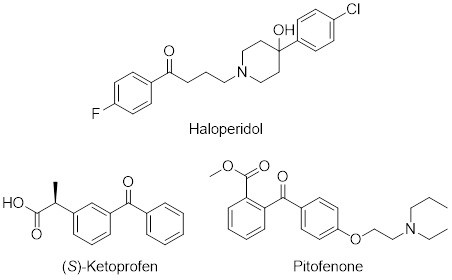 Earlier, hypervalent metals or peroxides were indispensable in C-H oxygenation reactions [19,20,21,22,23,24,25,26,27,28,29,30]. However, the formation of metal wastes and operational risks restricted the development of this strategy. O2 is the “greenest” oxidant as the only by-product formed during oxidation in the presence of oxygen is H2O [31,32]. Thus, intense efforts have been made to develop O2-based C-H oxygenation processes. As a result, various aerobic oxidation reactions to oxidize C-H bonds have been developed to produce aromatic ketones. Generally, N-hydroxyphthalimide (NHPI) or the process of transition-metal induced homogeneous catalysis process drives the aerobic oxidation reactions [33,34,35,36,37,38,39]. Some heterogeneous catalysts have also been developed over the years for the C-H oxygenation processes [40,41,42,43,44]. However, these reactions proceed under harsh conditions, and the catalysts used are expensive. These hinder the practical applications of these strategies.

Compared to thermal reactions, light-induced processes can often proceed well under mild reaction conditions [45,46,47,48,49,50,51,52,53,54,55,56,57]. Many groups tried to apply this strategy to the area of C-H oxygenation [58,59,60,61,62,63]. To date, transition-metal-catalysts are indispensable in nearly all light-driven C-H aerobic oxidation processes. However, fine-chemical industries, especially the pharmaceutical industries, prefer to avoid the use of transition-metal-based systems because the leaching metal in the final products limits the application of the processes (Scheme 1). Therefore, it is important to develop metal-free catalytic systems to realize the C−H aerobic oxygenation process. We developed an efficient metal-free aerobic C-H oxygenation process for the generation of aromatic ketones. 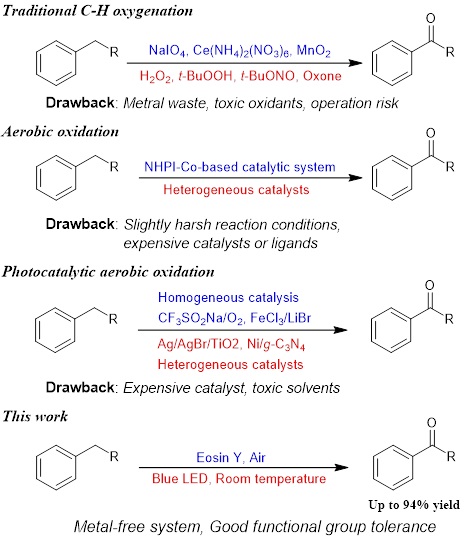 Given our previous experience with the construction of aromatic ketones [64,65,66], the oxidation of ethylbenzene was chosen as the model reaction (Table 1). The most common organic dyes were first examined as catalysts because they can be used as efficient photosensitizers to promote some radical reactions under illumination conditions. Eosin Y demonstrated the best catalytic activity during the production of acetophenone which was obtained in a 65% yield. A decrease in the catalyst loading resulted in poor results. When the catalyst loading was increased to 10 mol%, the yield increased to 88%. A continuous increase in the catalyst loading did not result in a significantly improved yield. Hence, 10 mol% of Eosin Y was used as the catalyst for further studies. The solvent effect was studied, and the results suggested that CH3CN was the best reaction solvent. It was also observed that only a trace amount of the product could be obtained under solvent-free conditions (entry 13). The use of O2 instead of air did not improve the reaction yield, and a similar result was obtained. Besides, only a trace amount of product was obtained when white LED was used as the light source. Finally, results from control experiments demonstrated that the absence of the photocatalyst or light completely inhibited the reactions.

Table 1 Screening of reaction conditions [a].

Table 1 Screening of reaction conditions [a].

We determined the optimized conditions for the visible-light-induced C-H aerobic oxygenation process and used these conditions to determine the substrate scopes of the proposed method (Figure 2). Various phenylethane derivatives with electron-donating or withdrawing substituents at different positions were used to conduct the reactions. All reactions proceeded well, and the corresponding ketones were obtained in moderate to good yields. To our delight, a series of functional moieties, such as methoxy (1e and 1f), halide (1 g-1j), hydroxyl (1 k), and nitro (1 l and 1 m), was well tolerated under the optimized reaction conditions. Both α-and β-ethyl naphthalenes could also be used to conduct the reactions following the proposed protocol. The desired products were obtained in 65% and 74% yields, respectively. 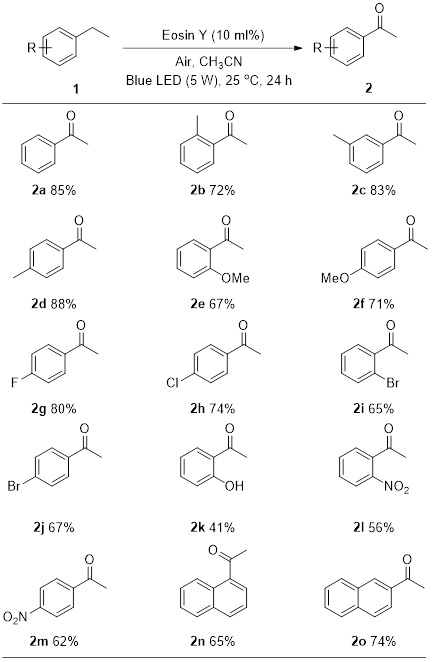 Next, diaryl methanes were oxidized under the same reaction conditions. To our delight, significantly high electronic effects were not exerted on this substrate (Figure 3). When the reactions were carried out with starting materials containing a methyl group (3b and 3c) or chlorine atom (3d), similar reactivity was observed, and the corresponding ketones were obtained in excellent yields. It is noteworthy that the reactions with fluorene (3e) or xanthene (3f) also proceeded smoothly, and the products were obtained in 90% and 94% yields, respectively. 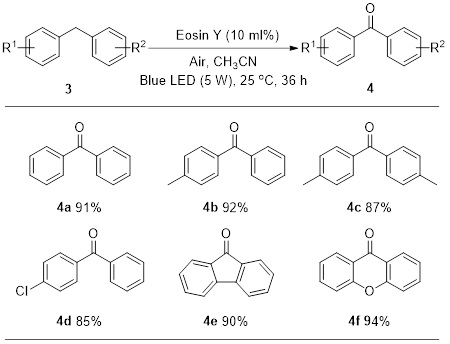 Experiments were conducted under conditions of low catalyst loading to demonstrate the practical use of the proposed strategy (Scheme 2). To our delight, the products were obtained in good yields under low catalysts loading conditions. Good product yields were obtained even when only 1 mol% of Eosin Y was used to conduct the reactions. A 10 mmol-scale oxygenation reaction was carried out with diphenylmethane. Under these conditions, benzophenone was obtained in an 80% yield. The results revealed that the proposed methodology could be used for the efficient synthesis of aromatic ketones. 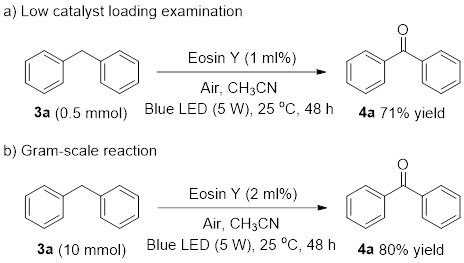 Scheme 2 Applicability of the proposed strategy.

Results from control experiments revealed that the reactions could be carried out in the absence of either light, photocatalyst, or air. To further investigate the reaction mechanism, some quenching reagents were used in the oxygenation process of diphenylmethane (Scheme 3). The addition of radical scavengers resulted in the complete inhibition of the oxidative reaction. Although no radical capture product was obtained, these results suggested that a free radical process might be involved. When CuCl2 was added to the reaction mixture, the yield decreased significantly, indicating the occurrence of a single-electron process [67,68,69,70]. The yield further decreased when benzoquinone was introduced into the reaction system. This proved that superoxide radicals were associated with the oxidation process [15,71,72]. Finally, some isotope labeling experiments were also carried out. When H218O was added to the reaction mixture, 18O-labelled products were not obtained. The reaction was carried out under an atmosphere of 18O2 to detect the source of oxygen in the ketone, and the 18O labeled product was obtained in 77% yield. The results confirmed that the oxygen in the product was supplied by the dioxygen moiety in the air. 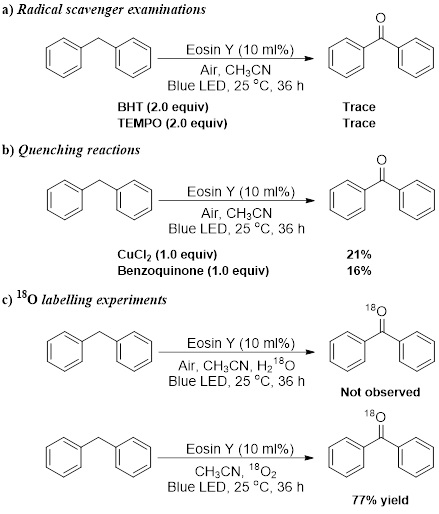 Based on the experimental results and previously reported studies, we proposed a reaction mechanism for the C-H oxygenation reaction (Scheme 4). The excited-state species of Eosin Y was first obtained via light irradiation which was then oxidized to Eosin Y+ by O2. This process was accompanied by the generation of the superoxide radical anion. The reaction between Eosin Y·+ and aryl alkanes 1 results in the production of the radical cation A. Eosin Y was recovered to complete the photocatalytic cycle. The radical species A reacted with the superoxide radical anion to yield intermediate B. The final dehydration step results in the production of the target ketone product 2. 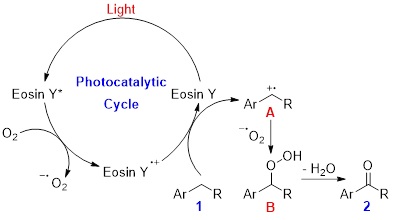 In summary, a light-induced synthetic method for the synthesis of aromatic ketones has been developed following the C-H oxygenation process. Eosin Y was used as the photocatalyst, and air was used as the oxidant. The reaction proceeded smoothly at room temperature. Numerous sensitive functional groups are well-tolerated during the process, resulting in the production of the desired ketones in good to excellent yields. An excess of metal-based reagents was not used to conduct the reactions. Hence, the method can be effectively used in pharmaceutical industries. Results from mechanistic studies revealed that the reaction proceeded via an electron transfer pathway. Further mechanistic studies and studies on the applicability of the proposed method in pharmaceutical synthesis are underway in our laboratory.

This work was supported financially by the Shaanxi University of Science & Science and Technology Department in Shaanxi province (No. 2022JM-061).

Pan Xie contributed to the conception of the study and manuscript preparation. Dongdong Du and Cheng Xue performed the experiment and contributed significantly to the analysis. Sanshan Shi helped perform the analysis with constructive discussions.

. To speed up the process, the GC technique was used to optimize the reaction conditions. The reaction was very clean and only ketone was obtained. C-C bonds were not cleaved and oxidation products and aromatic carboxylic acids were detected using GC and TLC techniques.