Cellulosic fibrous mats were impregnated with various water-repellent formulations based on reclaimed polystyrene (5, 10, 15, and 20%), alkyd resin (5%), gum rosin (5%), and paraffin wax (0.5%). The mats were tested for their bursting strength and resistance to bending. They were also subjected to the ring crush test and short-span compression test. By increasing the concentration of total solid ingredients (5, 10, 15, 20, and 25.5%), the retention and grammage of the mats were increased, and all strength properties were improved. All formulations containing 20% reclaimed polystyrene had the highest strength properties. The formulations containing alkyd resin had higher bursting and bending strength than gum rosin. However, the formulations with gum rosin exhibited higher strength than those with alkyd resin in the ring crush test and the short-span compression test. Adding paraffin wax in formulations with 20% reclaimed polystyrene and gum rosin did not affect the strength properties.

Wood has many uses due to its unique structure and chemical composition. However, the hygroscopic nature of wood causes a fluctuation in its size and makes it susceptible to degradation by fungi and insect attacks, thus limiting its application in outdoor uses [1,2,3]. These limitations are overcome by performing impregnation with preservatives, chemical modification of wood, thermal treatments, and applying water repellents [4].

Water repellents are mixtures of various materials, such as resins, waxes, oils, and solvents. They may also contain small amounts of fungicides or insecticides. They have been extensively investigated and widely used to protect wooden structures from water uptake and fungal and insect attacks in outdoor or semi-outdoor settings [5,6,7]. Water repellents are applied using conventional impregnation techniques and deposited in wood capillaries. Thus, they fill in the lumens and form thin films on pore surfaces [8]. The non-polar agents in water repellents cannot establish chemical linking with the cell wall polymers, and thus, they only work as a physical barrier. Hence, they can reduce the water adsorption rate but not the final moisture content [9]. Paraffin wax is the most common synthetic water repellent used in the wood industry [10]. Eco-friendly water repellents with promising chemical and physical composition based on wood extractives and natural resins (oleoresin, gum rosin, tall oil fractions, etc.) have been investigated. These alternative green materials were investigated in solid wood, fiber-based matrices, and wood composites, and their effectiveness was found to be comparable to that of traditional synthetic water repellents [11,12,13,14,15,16,17].

The increase in environmental awareness and associated policies have encouraged the use of renewable substances, including recycled materials, for wood protection. Reclaimed polystyrene can repel wood specimens and particleboards more effectively than commercial water repellents [18,19]. Studies on the water-repellent properties of formulations based on reclaimed polystyrene, alkyd resin, gum rosin, and paraffin wax have shown promising results [20]. In this study, we investigated the above-mentioned formulations and determined the strength properties of cellulosic fibrous mats using the deposited water-repellent films.

The composition of the experimental water-repellent solutions was based on reclaimed polystyrene (styrofoam, expanded polystyrene-EPS in the form of insulating thermal and acoustical foam boards), alkyd resin (alkydal FSOW/63% in butyl glycol; Bayer, Germany), paraffin wax (with a melting point of 55 °C), and gum rosin (quality WW) produced by distilling Aleppo pine oleoresin [20]. The substances were diluted in different proportions of commercial nitro and toluene solvents (Pansil Industry of Chemical Products, Attica, Greece). Upon macroscopic inspection, the water-repellent solutions were completely diluted in the solvent in room temperature, for at least 48 h, and they remained clear after gentle agitation. In total, 24 water-repellent formulations were prepared, as shown in Table 1.

Filter paper samples (12 × 12 cm2 and 60 g/m2 of grammage) were impregnated by immersion in the water-repellent formulations for 3 min. Next, the samples were air-dried in a horizontal position for solvent evaporation. Ten samples were impregnated with each formulation. After air-drying and conditioning the samples at 23 ±1 °C and 50 ±2% RH according to the SCAN-P2:75 standard, the impregnated filter paper samples were used for determining grammage and strength properties, including bursting strength, resistance to bending, the ring crush resistance (RCT), and the compression strength (SCT), according to corresponding SCAN and ISO standards (Table 2).

Table 2 The properties, dimensions, number of specimens, and the corresponding standards applied are shown.

Table 2 The properties, dimensions, number of specimens, and the corresponding standards applied are shown.

The characteristics of fractured surfaces after the bursting strength tests were observed under an SMZ-800 stereomicroscope (Nikon, Tokyo, Japan) at 5x magnification using stripes. One-way analysis of variance (ANOVA) of the strength values was performed using the software program IBM® SPSS® Statistics, version 24.0. The statistical differences between the values were evaluated by performing Tukey’s honestly significant difference (HSD) test at an error probability of α = 0.05. The statistical analysis was conducted only for those formulations that exhibited better strength properties, i.e., formulations based on 20% polystyrene (see Table 3). 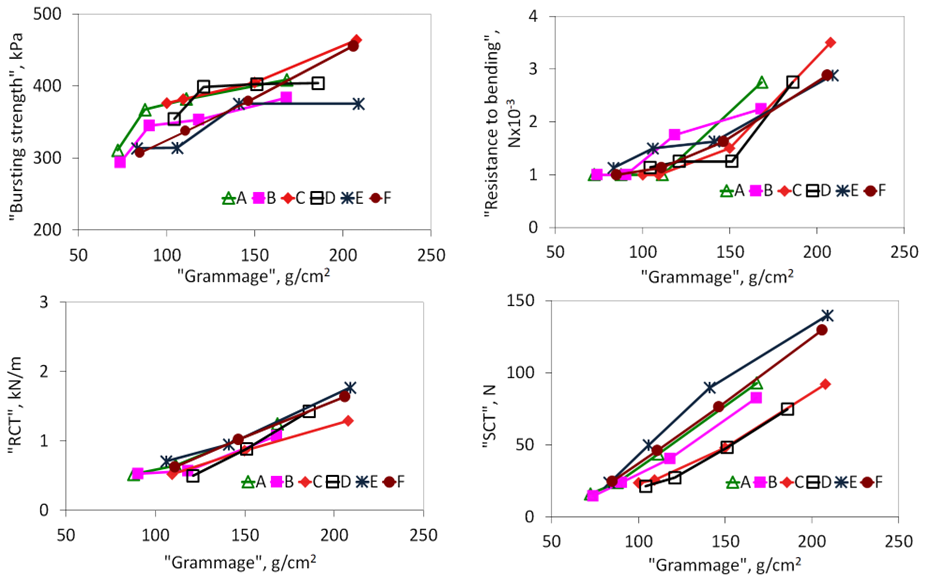 Figure 1 The relationship between strength and grammage. The symbols are explained in Table 1. 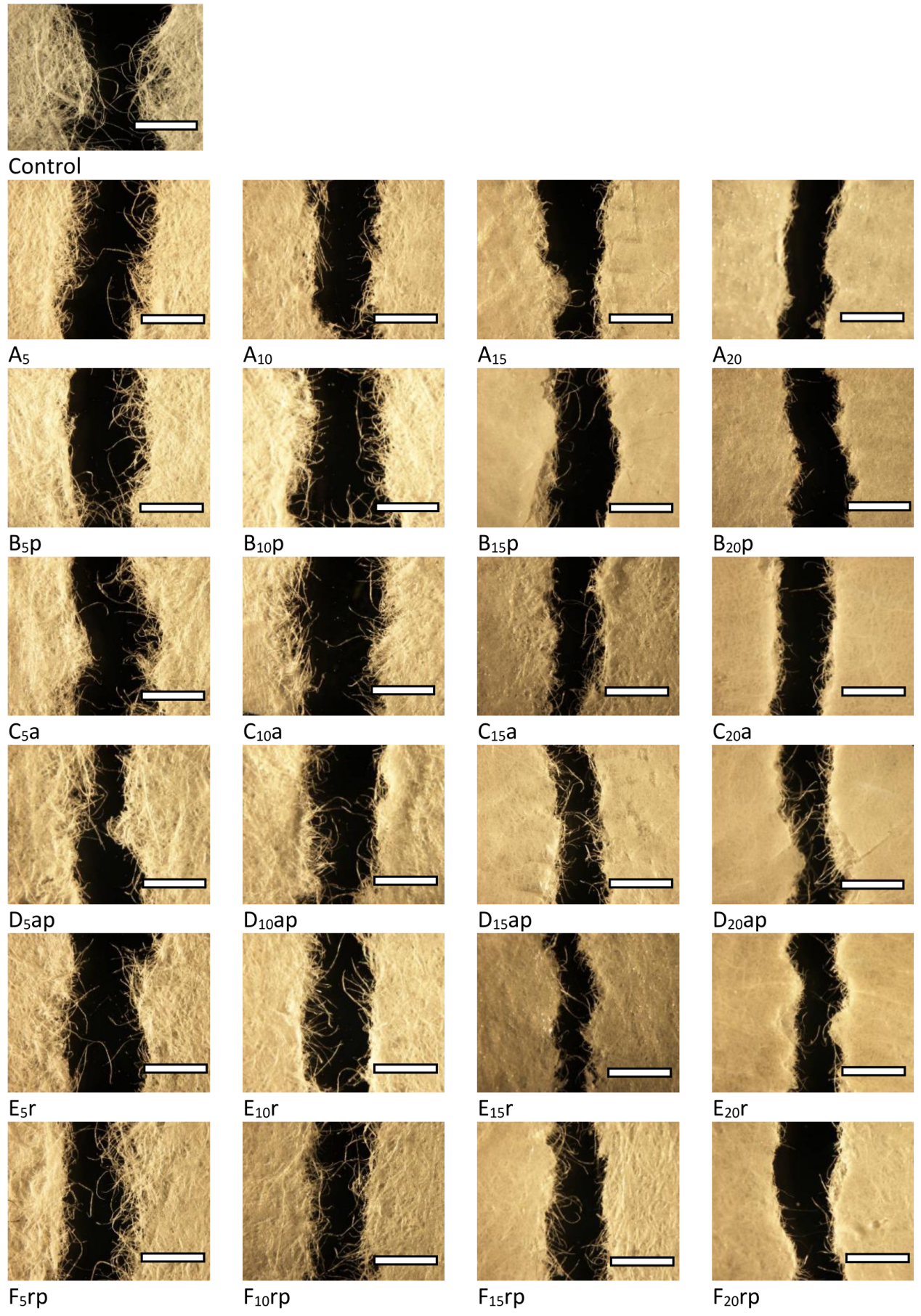 Figure 2 Fractured surfaces of filter papers after the bursting strength tests were performed. The symbols are explained in Table 1; scale bars = 10 mm.

Such interfiber fractures are considered to be a supplementary assessment of the bonding quality among treated cellulosic fibers [27]. At low solid concentrations (5–10%), the fibers separated from each other at the edges of the fracture. At higher concentrations (15–20%), the formulations decreased the porosity of the cellulosic fibrous mats, and the fibers broke (see Figure 2). This failure mode of the fibers (breakage) might be associated with better mechanical properties of the filter paper samples impregnated with solutions containing high concentrations of solid (see Table 3). Since the filter paper matrix was immersed in the water-repellent solutions, the mechanical strength of the impregnated filter papers depended on the matrix, the water-repellent film, and the interfacial adhesion between them. Higher concentrations of the formulations provided greater strength by encompassing the fiber network and further fortifying it. In contrast to the strong films produced by the formulations based on reclaimed polystyrene, films with poor mechanical strength and low fiber-fiber interactions are produced when a high level of paraffin wax is used [16,17,28,29].

The strength properties only of those formulations in which the polystyrene content was 20% are shown in Figure 3. 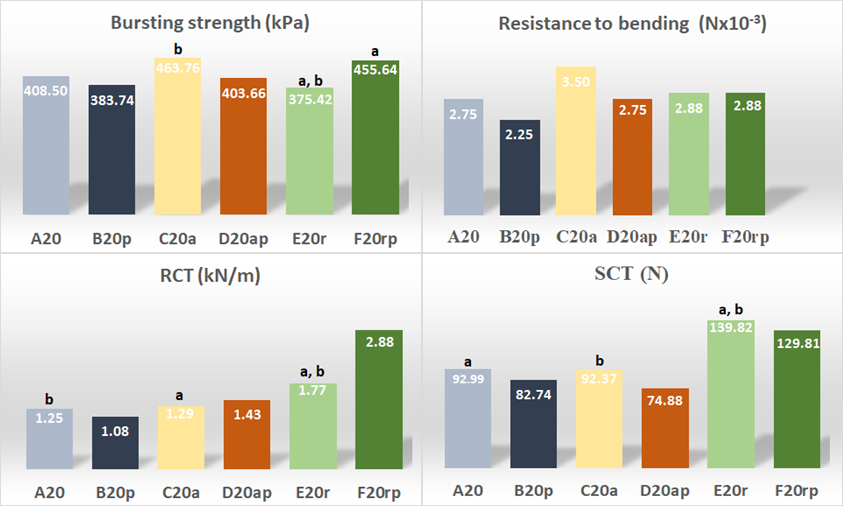 Figure 3 Strength values of filter paper samples impregnated with formulations based on reclaimed polystyrene with 20% solid content. Strength values with the same letter are significantly different, as determined by ANOVA and Tukey’s HSD test. The symbols are explained in Table 1.

The conclusions of this study can be summarized as follows: