The surface roughness of titanium could regulate various cellular functions such as survival and growth. In the context of cell adhesion to materials, cell spreading and cell shape are also closely linked to various cellular functions. Previously, we found that Ti substrate with a 100-nm scale surface roughness reduced cell survival. However, effects of surface roughness on cell shape were not investigated. Herein, we quantified the initial adhesion behavior of osteoblasts on a Ti substrate with ~100 nm scale surface roughness, which was prepared using silicon carbide (SiC) polishing paper. To evaluate the morphological parameters, such as perimeter, feret’s diameter, circularity, and spreading area on initial adhesion, cells were cultured on SiC-polished or mirror-polished Ti for 24 h. These morphological parameters were determined from fluorescence micrographs using image J software. Cells cultured on SiC-polished Ti exhibited poor spreading area. Additionally, pseudopodia formation and actin bundle construction of the cells were also poor on SiC-polished Ti, while the cells cultured on the mirror-polished Ti exhibited clear F-actin and greater overall cytoskeletal activity. On a Ti substrate, ~100 nm scale surface roughness could be expected to inhibit the cell spreading and pseudopodia formation of osteoblasts when compared to those cultured on a smooth substrate. Thus, consistent with our earlier reports, the surface roughness of the substrate is linked to reduced cellular functions such as cell growth and differentiation.

Several groups have reported contrary results for cellular function on nanometer-scale surface roughness. Cai et al. reported that there was no difference in cell adhesion, spreading, proliferation and differentiation [11] between cells cultured on Ti with a single nanometer surface roughness and those cultured on tissue culture polystyrene (TCPS). Moreover, Washburn et al. reported that poly-l-lactic acid (PLLA) with a 10 nm root-mean square (RMS) roughness value reduced the proliferation activity of osteoblasts [12]. According to their results, the critical RMS roughness value for reducing proliferation activity was approximately 1.1 nm. Furthermore, we have previously reported that a Ti surface with an arithmetic average of the roughness (Ra) value on the order of 100 nm markedly reduced fibroblast attachment and proliferation [13]. Similar results have been found for osteoblasts [14]. These phenomena are possibly induced by poor cell adhesion on to the material surface because cell adhesion is closely linked with cellular functions such as survival.

In this study, we compared the morphology of osteoblast at initial adhesion on a mirror polished Ti and that on a surface with 100 nm-scale roughness. To adjust the surface roughness without affecting the chemical composition of the surface, we used silicon carbide (SiC) paper and a colloidal silica suspension. Cells from the mouse osteoblast cell line MC3T3-E1 were cultured on each surface, and their attachment activity, spreading area, and cell shapes were analyzed. These cells retained their characteristic morphology on the rough surface. These results provide insight into the effects of surface roughness on initial cell adhesion based on the cell shape for generating cellular functions (i.e. proliferation and differentiation).

Commercial pure Ti discs (grade 2, Rare Metallic Co., Tokyo, Japan) were mirror-polished using a silica suspension. To prepare the roughened surface, the Ti discs were re-polished with silicon carbide (SiC) polishing paper, and the discs were rinsed by sonication in acetone three times. The Ti discs were then immersed in a 70% ethanol solution under ultraviolet light for 1 h for sterilization. The surface of each Ti disc was observed under a scanning probe microscope (SPM-9600; Shimadzu, Kyoto, Japan) using a silicon cantilever (NCHR-20; Nano World AG, Neuchâtel, Switzerland). The surface chemical composition of each Ti was determined using SEM-EDS (JSM-7600FA, JEOL). The Ra value of each surface was calculated by examining Z-range images. To determine the water contact angle, the 10 μL water drop on the Ti surface was captured by a digital camera (CX4, Ricoh, Tokyo, Japan). These camera images were subsequently used to calculate the contact angle using Image J software (http://imagej.nih.gov/ij/).

To investigate initial cell adhesion, cells were seeded on each Ti surface at a density of 50,000 cells/cm2 and were incubated in α-MEM for 4 h and 24 h. After incubation, the number of adhered cells was determined using Cell-Counting Kit 8 (Dojindo Laboratories, Kumamoto, Japan). The cells were incubated in test medium containing 10% Cell-Counting Kit solution for 1 h at 37°C in a CO2 incubator. Next, absorbance of the medium was measured at 450 nm using a spectrophotometer (SmartSpec Plus, BIORAD, Richmond, CA).

To determine the morphology, the cells were cultured on each Ti surface for an incubation period of 24 h. After incubation, the cytoplasm was stained with 0.5 mg/mL calcein-AM (Dojindo Laboratories) for 1 h at 37°C in a CO2 incubator. The shape of the cells was observed using fluorescence microscope (IX-71; Olympus, Tokyo, Japan) without fixation, and the images were captured using a CCD camera. The cell spreading area, perimeter, feret’s diameter, and circularity, were then calculated from the captured images using Image J.

To observe actin filaments, the cells were fixed with 4% paraformaldehyde for 1 h, washed with PBS, and stained with rhodamine-conjugated phalloidin (Cytoskeleton, Inc., Denver, CO, USA) for 1 h at room temperature. The stained cells were then observed using fluorescence microscope (IX-71; Olympus).

Five samples were used in each analysis. The data represents average ± SD. Differences were examined using Student’s t-test, with significance defined at p < 0.05.

3.1 Preparation of the Ti Surface

Figure 1 AFM topological images of each surface with an area of 20 μm ×20 μm. (a) SiC-polished Ti and (b) Mirror-polished Ti. 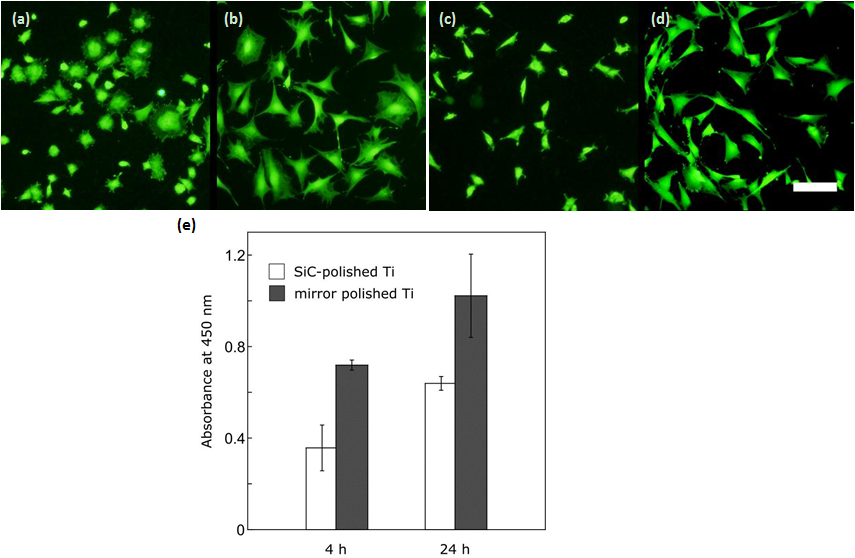 Cell shape parameters such as, perimeter, feret’s diameter, circularity, and spreading area on each substrate after cultivation for 24 h were determined to examine the morphology of adherent cells. Each Ti surface was significantly different with regard to the morphological parameters of the adhered cells. Circularity, which can be used as an indicator of pseudopodium formation, was greater on mirror-polished Ti than that on SiC-polished Ti. These results supported the qualitative observations of cell morphology shown in Figure 3 (a-d).

Figure 4 Fluorescence microscopic images of actin fibres in cells cultured on (a) SiC-polished and (b) mirror-polished Ti surfaces. The cells were cultured for 24 h on each surface. The scale bar represents 50 μm.

Many studies have explored the effect of surface roughness on cell adhesion. In these studies, the roughened surface was created using different processes such as blasting, alkaline or/and acid etching, resulting different surface chemical compositions and topologies. Therefore, it is difficult to directly compare the findings of the different studies. According to EDS analysis, the surface chemical composition of SiC-polished Ti was similar to that of mirror-polished Ti (Figure S1). Furthermore, although the SiC-polished Ti showed higher contact angles than the mirror-polished Ti, the results were not statistically significant. These findings indicate that SiC polishing had a minimal effect on the chemical composition of the Ti surface. Therefore, it is plausible that cells were directly affected by surface roughness and topology. Surface topology is mainly influenced by non-directional scratches on SiC-polished surface and is significantly different from that created by blasting or SLA. Therefore, the effect of surface-to-cell attachment may be different from that observed with surface modified by other methods.

The shape of a cell on the surface of a material is an important parameter for determining the biocompatibility of the material because cell spreading is closely linked to cell survival [15,16] and differentiation [17,18]. There was no substantial difference between the morphologies of cells upon initial adhesion on the mirror-polished Ti surface and TCPS. Our results clearly showed that cell spreading is inhibited on SiC-polished Ti. Ridges and pitches of roughened surface produced by sand blasting and chemical etching could provide mechanical stabilization of cell membrane [22,23]. Therefore, distinctive actin networks were observed on roughened surface [22]. Sub-micron scale surface roughness created by mechanical polishing may have induced the same effects on the cells. Therefore, cells attached to the roughened surface exhibited indiscernible actin fibers compared to those on smooth surface. Although difficult to compare, data from different research suggest that inhibition of cell spreading and poor actin fiber formation may be closely linked to ridges and pitches of roughened surface. Hence, surface topography information is potentially more important than surface roughness.

In this study, we investigated the initial adhesion behavior of MC3T3-E1 mouse osteoblastic cells on sub-micron meter-scale roughened Ti. The spreading of these cells was inhibited, and they exhibited a round shape on the surface. Given that insufficient cell spreading directly relates to poor cell adhesion, it seems likely that the ~100 nm scale surface roughness might be inducing poor cell adhesion and contributing to reduced cell survival.

This work was supported by JSPS KAKENHI Grant Number 19K12798.