Technical lignins from the biorefinery, pulp, and paper industries are largely underutilized, even though this aromatic and randomly structured biopolymer could be an interesting raw material for advanced applications in addition to bulk daily goods. Recently, colloidal lignin particles (CLPs) have gained much of the research interests due to the attractive multi-functional properties of the biopolymer. Utilization of lignin in nanoparticulate morphology resolves most of the drawbacks when using lignin (heterogeneity and low solubility). Stable lignin nanodispersions in different formulations is an attractive method to prepare tailored nanobiomaterials. Potential value-added applications include adhesives for wound sealing, edible coatings for foods, fiber modification for textiles to improve adhesion, hydrophobicity, antimicrobial and anti-oxidative properties of the material, as recently shown using chamois and nanocellulose model matrixes. Moreover, CLPs could be used as carriers for enzymes, emulsifiers for colloids, adsorbents in water purification and controlled-release vectors for drugs and pesticides. In this contribution the recent advances are highlighted. 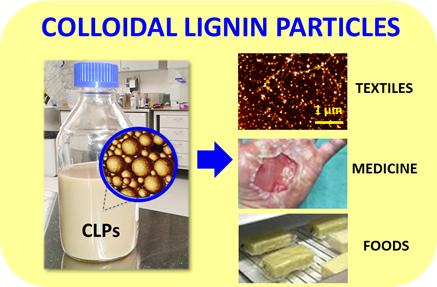 Green technologies for the preparation of nanobiomaterials from the forest process side-streams as lignin are increasing rapidly [1,2,3,4,5,6,7,8,9,10,11,12,13,14,15,16,17,18,19,20,21]. Tailored colloidal lignin particles could be produced in the laboratory at a semi-industrial scale [22,23,24,25,26,27,28,29]. The most prominent method for the preparation of smooth spherical lignin nanoparticles (NPs) is solvent switching using tetrahydrofuran or acetone and water, in other words, solvents with a large difference in polarity [14,15,16]. Irregularly shaped particles can be formed by sonicating lignin suspensions [3,10,15]. However, fundamentals of the CLP formation are far from understood due to the random structure of the biopolymer. It has been proposed that the process may start from the formation of tiny particles (< 100 nm) colliding with each other, growing to large aggregates. Then, the most phenolic and hydroxyl-rich parts of the polymeric lignin adsorbs onto the surface of the aggregates forming negatively charged surfaces [30]. Stability of the CLPs towards alkali and organic solvents can be enhanced using chemical and enzymatic cross-linking [18,19,31,32].

2. Functionalization of the Particles

Silkworm adhesive containing NPs is an interesting biomimetic model for the adhering of different surfaces [33]. Strong agglutination at the interface is a result of the large surface area of the NPs forming a viscous matrix between the layers. There, they act as connectors dissipating energy under stress [34]. The nanosize of the particles ensures tight adhesion. Non-cytotoxic CLPs [3,35,36] on the surfaces could function accordingly and their function can even be improved and modified via coating or chemical surface functionalization of the particles to meet requirements of a broad range of applications [37,38,39,40]. Qian et al. [6] showed that atom radial transfer polymerization (ATRP) could be used to graft 2-(diethylamino)ethyl methacrylate groups to lignin following NP formation via CO2-bubbling. Kai et al. [11] used ring opening polymerization (ROP) to graft poly lactic acid (PLA) to lignin to prepare fibrous nanocomposites. Yang et al. [12] linked caprolactone-co-lactide to lignin to form a rubbery phase following poly ε -caprolactone (PCL) grafting and lignin-g-PCL NP formation via ROP. Including small reactive molecules in the hydrophobic core of the CLPs, specificity of the particles could be further tailored [41]. These examples show that CLP are easy to customize in different steps of the NP formation and methods for functionalization are vast. Combining different approaches such as coating, infusion, polymerization, enzymatic and chemical cross-linking the possibilities for the modifications are nearly unlimited.

Adhesives based on above nanobridging mechanism via inorganic NPs [42] and colloidal mesoporous silica (CMS) particles [43] have been proposed as alternatives for traditional medical adhesives [34] comparable to CLPs used to stabilize pickering emulsions [44]. Nanocellulose fibrils (CNF) and bacterial nanocellulose (BC) are lightweight and transparent polymers, making them excellent raw materials for tissue regeneration [45,46,47,48]. The major challenge for the exploitation of CNF is the poor stability of the fibrils in physiological conditions. Capability to obtain tight bonding between tissue edges to prevent bleeding and to get strong sealing are crucial properties for medical adhesives [42,49,50]. These adhesives are often toxic and unstable at physiological pH requiring complex in vivo analytical systems for curing reactions [51]. Feasibility to coat CNF with different CLPs using thermal cross-linking was demonstrated recently [19]. The method could be an effective way to improve mechanical strength and stability of CNF. Especially tiny CLPs prepared from enzymatically polymerized lignin [18] with specific protein coating could be potential additives for such applications [19]. Additionally, the colloidal structure of NPs enables faster decomposition of the particles in biological media than inorganic NPs, hindering undesirable accumulation in the body. The strong autofluorescence of lignin enable sensitive real time detection of the CLPs using microscopy, crucial for the development of image-guided procedures for clinical applications [51]. Enzymatic and thermal curing are fast and feasible in a moist environment [19]. CLP formation via solvent switching is an attractive method to infuse NPs with antibacterial agents as silver ions [3,4]. CLPs could be also co-precipitated with oil-soluble drugs as Resveratrol commonly used for cancer treatments [35]. In the cell, the drug is either slowly released via diffusion, or the structure of CLP is degraded [3,30,35]. CLPs magnetized by precipitating NPs with a magnetic salt or a magnetic mineral such as Fe3O4 enable efficient control of the particles in living systems with NMR imaging [36,51].

Food and medical applications are closely related. Food packages based on petroleum-based raw materials are not biodegradable. They have poor oxygen barrier properties possibly leaching harmful compounds into the foods. Water soluble edible coatings based on dairy proteins could be excellent alternatives for such packages [52,53]. Nanospheres prepared from caseins form thin films and have been used to coat foods and other biological tissues [54,55]. However, the poor water resistance and mechanical strength of these coatings could be improved using CLPs coated with β-casein [19]. Furthermore, using CLPs as functional ingredient in polylactic acid (PLA) blends, wheat gluten composites and polyvinyl alcohol (PVOH) and chitosan films, mechanical properties of the materials was shown to be improved [8,9,12,13]. Enhanced UV-protection and antibacterial property of the blends made them interesting additives for food packaging and cosmetic products, as sunscreens [7,56]. The UV-shielding property of lignin in sunscreens has been studied using both CLPs and polymeric lignin as an additive. The modified sunscreens had broad protection factors and could be prepared simply by adding CLPs into commercial cosmetic products. Large colloidal spheres were better UV-blockers than polymeric lignin. Furthermore, CLPs had a synergetic effect with UV-blocking substances present in the commercial sunscreens, significantly enhancing their performance. Moreover, modified CLPs could be effective emulsifying agents for O/W pickering emulsions for foods and cosmetic products [10,40].

In addition to adherence, CNF and chamois CLPs have been used to agglutinate protein matrix via β-casein coating following enzymatic cross-linking for fast curing [19]. In that way, it was possible to obtain stronger elastic agglutinations between the soft surfaces. Clearly, the type of biopolymer affected the strength, flexibility, and elongation of the joint significantly. Enzymatic cross-linking reactions have been used to strengthen polymeric lignin-containing technical glues as well [57]. Studies with soybean-based adhesives containing lignin showed that the protein – lignin ratio is the most critical parameter affecting the adhesive interactions [58,59]. Apparently, exploitation of technical lignin in nanoparticle morphology for adhering soft material following enzymatic curing is a potential approach for fibre modification to be used in textiles as shown with silk and protein particles [60].

As discussed above, ionic substances can be infused into CLPs [4], rendering them potentially useful for wastewater treatment. Due to different ionizable groups, CLPs have strong buffering effect towards neutral pH increasing the applicability of CLPs for wastewater refinement. This application could be accomplished in several ways. Wei et al. [44] showed that CLPs could be used to stabilize O/W emulsions for water purification processes to remove hazardous oil-soluble substances like styrene. CLP-coated styrene particles could be de-emulsified to recover the lignin and remove the styrene form the water phase. It has been also shown that emulsified lignin particles could be used as nanosized chambers for silver nucleation reactions [12]. When O/W-emulsified lignin particles, containing silver nitrate and sodium borohydrate separately, were mixed in an aqueous solution, metallic silver particles were formed [61]. Qian et al. [6] prepared controllable O/W emulsions containing decane by grafting 2-(diethylamino)ethyl methacrylate to lignin following CO2-bubbling for NP formation. De-emulsification occurred when the dispersion was bubbled with nitrogen gas, yielding a gas-switchable emulsion expanding the use of CLPs for a broad range of applications when controllability is required. It has also been shown that enzymes such as lipases and cutinases could be anchored to cationic CLPs, enabling them to catalyze esterification reactions in water solutions [17]. Then intermediately sized esters, like butyl butyrate, could be separated from the water phase, enabling simple and efficient processes for product purification and renewing of the whole process.

In this contribution, a range of recent applications for technical lignin in nanoparticle morphology is summarized. Clearly, the valorisation of lignin to water-dispersible nanoparticles resolves many of the bottlenecks that isolated lignin has faced during the past decades, making it an excellent raw material for many value-added applications, such as wound-healing, controlled drug release, and green antibacterial agents for medical and cosmetic products. CLPs could also be used in daily items like packaging and textiles, but also for more technical purposes like nanoreactors, anchors for biocatalysts, additives for composites [62], and adhesives [63,64]. Increasing lignin research focusing on the NP preparation and functionalization including scale-up of the methods might lead to a promising future for the world’s second most abundant biopolymer. In the pursuit of a greener future, technical lignin will undoubtedly play a great role in the economy globally.