Objective: Reversal learning requires an individual to alter their behavior when previously learned reward-based contingencies are reversed. Reversal learning is heavily influenced by cognitive flexibility, which has been shown to be enhanced with acute exercise. However, minimal work has directly evaluated the effects of acute exercise on reversal learning, which was the purpose of this experiment.

Methods: A between-subject randomized controlled intervention was employed. Participants (N=60) were randomized into one of three groups, including a control group, moderate-intensity exercise and vigorous-intensity exercise. The exercise bout lasted 15-min in duration. Reversal learning was evaluated using the Iowa Gambling Task, occurring shortly after the exercise session.

Emerging research demonstrates that acute exercise is associated with enhanced memory performance [1,2,3,4,5,6,7]. Mechanisms of this potential effect are multifold, including, for example, exercise-induced neuronal excitability, transcription factor expression, and growth factor production [8]. Although exercise has been shown to potentially help enhance the retention of learned information, very limited research has evaluated whether acute exercise can enhance the actual learning process, i.e., enhance learning.

The study included 60 participants (N=20 per group). Recruitment occurred via a convenience-based, non-probability sampling approach (classroom announcement and word-of-mouth). Participants included undergraduate and graduate students between the ages of 18 and 40 yrs.

Exercised within 5 hours of testing [23];

Consumed caffeine within 3 hours of testing [24];

Had a concussion or head trauma within the past 30 days [25];

Took marijuana or other illegal drugs within the past 30 days [26];

The equation for HRR that was utilized is:

The control group engaged in a seated task (Sudoku) for 20-minutes. This involved playing a medium-level, on-line administered, Sudoku puzzle. The website for this puzzle is located here: https://www.websudoku.com/. We have experimental evidence that playing this puzzle does not prime or enhance memory function [30].

In the IGT, participants are asked to choose from one of four different deck of cards to win as much money as possible. While completing this task, it is expected that participants will learn to discriminate advantageous decks (Decks C and D) from disadvantageous decks (Desk A and B). Learning from this task requires that participant to adjust their behavior based on the feedback provided (i.e., based on how much money is won/lost from the card selected). Further, adaptive behavior requires the inhibition of prepotent responses, as participants learn to forego the high monetary rewards (immediately attractive options that are also associated with high losses) in favor of the low to moderate monetary rewards (initially less attractive options that are associated with reduced losses and long-term profit). The shift in the prepotent response during this learning process is conceptualized as the reversal learning effect [9].

The IGT was completed on a computer using PsyToolkit. Participants completed 100 trials (i.e., selected 100 cards) of the IGT (lasting approximately 5-minutes in total) using the same IGT instructions as reported elsewhere [31]. The outcome measures included the mean net score, Gambling Index, which is the number of choices from the good decks, C and D, minus the number of choices from the bad decks, A and B. Results are presented for five separate blocks (Block 1, trials 1-20; Block 2, trials 21-40; Block 3, trials 41-60; Block 4, trials 61-80; and Block 5, trials 81-100). Higher index scores are indicative of a better reversal learning effect.

All statistical analyses were computed in Jasp (v. 0.10.0). A 3 (condition) x 5 (blocks) two-factor mixed-measures ANOVA was computed. In the ANOVA model, the sphericity assumption was violated, and as such, we report the Huynh-Feldt corrected values. Statistical significance was set at an alpha of 0.05. Partial eta-squared (η2p) was calculated as an effect size estimate.

Table 1 displays the characteristics of the sample. Participants were similar across the three experimental groups. That is, age (p = 0.69), gender (p = 0.29), race-ethnicity (p = 0.70), and BMI (p = 0.72) were not statistically significantly different across the three groups. 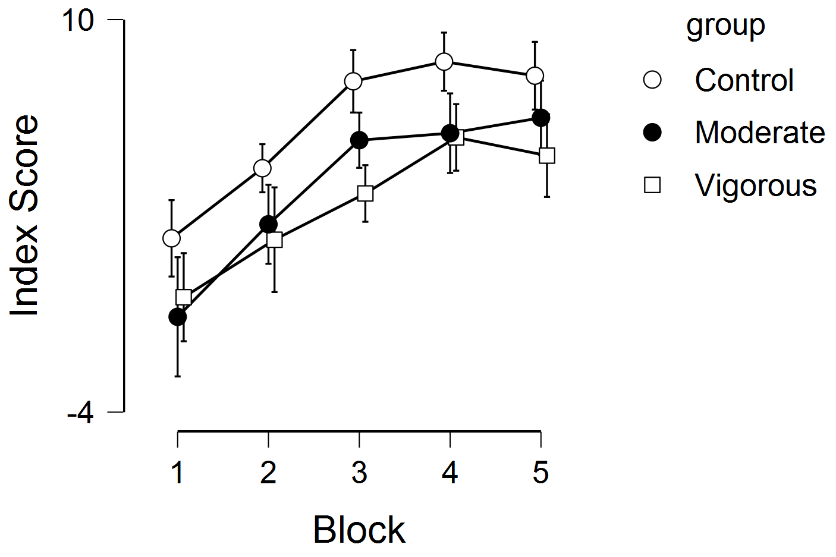 The present study, written as a brief report, aimed to evaluate whether acute exercise can enhance a cognitive-related reversal learning effect. The motivation for this experimentation came from past work demonstrating that acute exercise can enhance the functional connectivity of neurons [32], improve cognitive flexibility [15,16,17], as well as improve memory function [1,2,3,4,5,6,7], all of which are important for cognitive-related learning. In the present experiment, our main findings were as follows. Across the learning blocks, participants, on average, improved their reversal learning. However, this enhanced reversal learning effect was not influenced by acute exercise.

Limitations of this study include the homogeneous sample of participants, limiting generalizability to other populations. As such, future work on this topic should consider other populations (e.g., older adults) that may be more likely to observe learning effects from acute exercise. Further, we did not employ a baseline measure of reversal learning, which is a limitation of our study. However, we were concerned that a baseline assessment would induce a learning effect for our post-exercise learning measure. Strengths of this investigation include the experimental design, study novelty, and evaluating multiple exercise intensities.

Author C.S. collected the data. Author P.L. conceptualized the study, analyzed the data and prepared the initial draft of the manuscript.