In order to improve offshore wind power operation and maintenance (O&M), particularly during tropical and non-tropical cyclones, short-term forecasts or nowcasts up to 6 hours of meteorological and oceanographic (met-ocean) parameters including wind, waves, currents and turbulence intensity are needed. On the basis of numerous air-sea and wind-wave interaction experiments, datasets are analyzed including those from simultaneous measurements of wind and waves during Hurricane Wilma. Formulas are presented for nowcasts of met-ocean parameters. For quality assurance, these proposed formulas are further verified by independent datasets as provided in the literature. This manual-like guide should be useful for offshore wind-power O&M technicians and operators.

According to the Glossary of the U. S. National Weather Service (https://w1.weather.gov/glossary/index.php?letter=n), nowcast is a short-term weather forecast, generally out to six hours or less. While global or regional weather forecasts are routinely available, e.g. from the European Centre for Medium-Range Weather Forecasts (ECWMF) or the U.S. National Center for Environmental Prediction (NCEP), it is the purpose of this study to supplement or value-added nowcast for a smaller area within the forecasted domain such as an offshore wind farm. Using the wind or wave forecasts by the ECWMF or NCEP, we further add the nowcast for wind-driven current and overwater turbulence intensity, which are needed for offshore wind power operation and maintenance (O&M).

According to [1,2,3], for aerodynamically rough flow over the ocean, approximately, the wind speed at 10m (meters), U10 ≥ 9 m/s and for a wind sea, the wave steepness, Hs /Lp ≥ 0.020. Here Hs is the significant wave height (m), Lp (=1.56 Tp2) is the dominant wavelength (m) and Tp is the peak wave period (in seconds). Note that the wave parameter, Hs /Lp, is called wave steepness. Therefore, we define here that when U10 ≤ 9 m/s and Hs /Lp ≤ 0.020, fair weather and swell dominant conditions exist and they are not of major meteorological and oceanographic (met-ocean) concerns from the viewpoints of offshore wind power O&M. In other words, when a wind farm is under gale or tropical cyclone conditions, nowcasts of wind, wave, current and turbulence intensity are more important. Following topics are our proposed manual-like guide for such an endeavor.

According to [3], during extra-tropical or tropical cyclone conditions, approximately,

Here Tp is the peak or dominant wave period (in seconds).

Further verification of Eq. (1) during a tropical cyclone is presented in Figure 1. Since the slope is unity and the correlation coefficient R = 0.85, we can say that Eq. (1) is useful for operational use. In order to validate Eq. (1) under non-tropical cyclone conditions, Table 1 is provided and the result is shown in Figure 2. If one accepts the statistics given in Figure 3 and Figure 4, Eq. (1) is also applicable in Lake Ontario [4] and the Southern Ocean [5]. 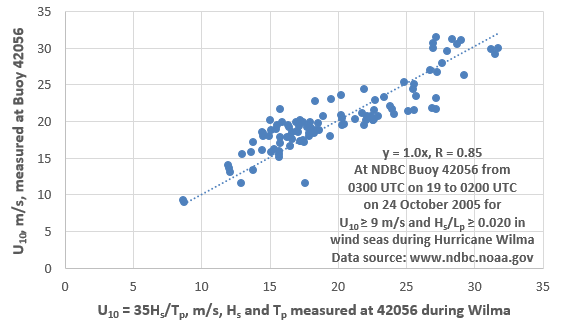 Table 1 Datasets for the four non-tropical cyclones used in this study (Data source: www.ndbc.noaa.gov). Note that the wind speed measured at Buoys 45008 and 42360 were adjusted to U10 according to the wind-gust method as presented in [3].

Table 1 Datasets for the four non-tropical cyclones used in this study (Data source: www.ndbc.noaa.gov). Note that the wind speed measured at Buoys 45008 and 42360 were adjusted to U10 according to the wind-gust method as presented in [3]. 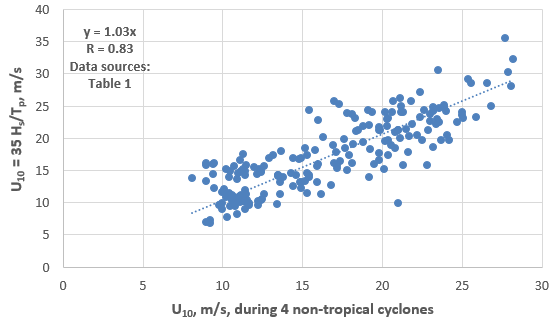 Figure 2 A verification of Eq. (1) under non-tropical cyclone conditions. 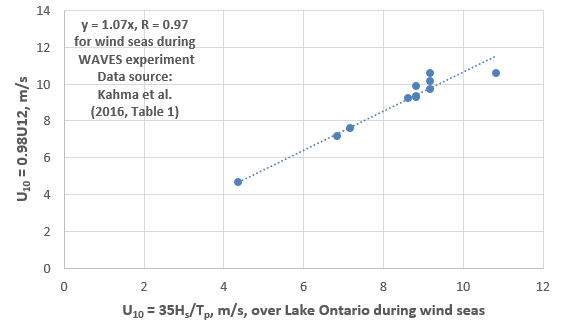 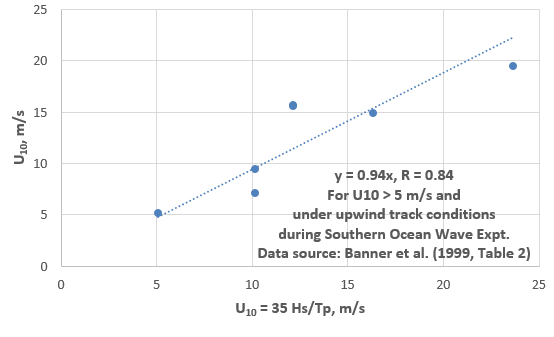 Table 2 Examples of estimating winds and currents using the extreme wave measurements during Hurricane Ivan in 2004 based on Teague et al. [14].

Table 2 Examples of estimating winds and currents using the extreme wave measurements during Hurricane Ivan in 2004 based on Teague et al. [14].

If Tp is not available, on the basis of Figure 5 during Hurricane Wilma near the National Data Buoy Center (NDBC) Buoy 42056 (see https://www.ndbc.noaa.gov/hurricanes/2005/wilma/), it may be estimated as 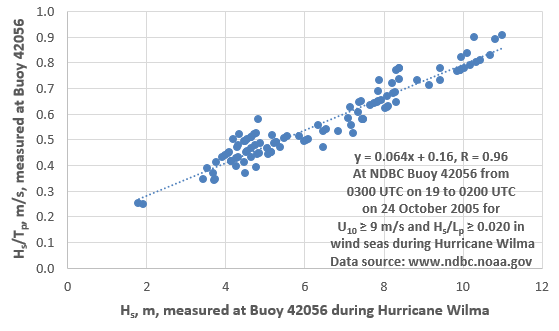 So that U10 and Hs are linearly related and according to Figure 6, we have 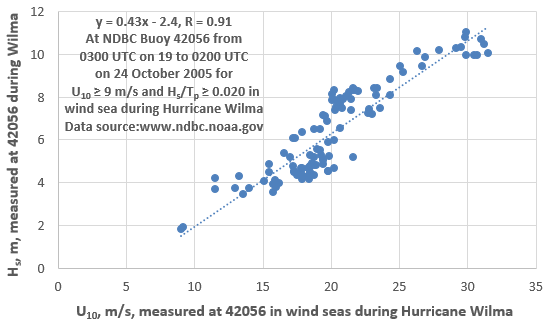 Figure 6 Relation between Hs and U10.

Overwater turbulence intensity (TI) is an important parameter for offshore wind power O & M [6]. According to [7,8,9], when the atmospheric stability is near neutral [10], we have

Here U* is the friction velocity in m/s and Zo is the aerodynamic roughness parameter in meters.

Simultaneous measurements of met-ocean parameters including U10, Hs and Tp are available at Buoy 42056 during Hurricane Wilma. These data can be analyzed using Eqs. (4) and (5). Figure 7 and Figure 8 are the results for the relations between TI at 10-m with U10 and Hs, respectively, so that 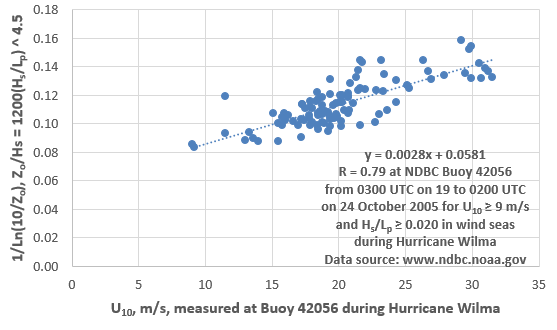 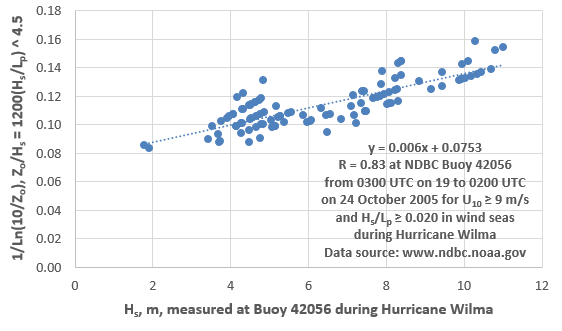 Figure 8 Variation of TI at 10m with Hs.

For quality assurance, Eq. (6) is compared with the TI formula by Smith [11]. It is a surprise that the result is nearly identical, indicating Eq. (6) is very useful for offshore wind power O & M, since it extends from gale force wind to hurricane condition. 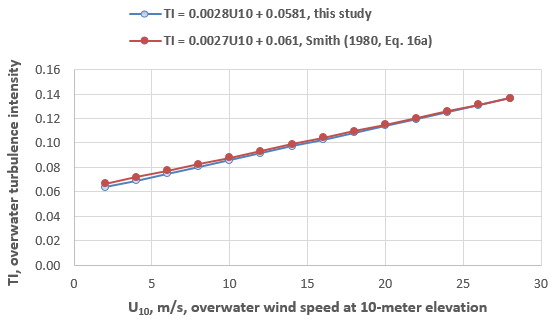 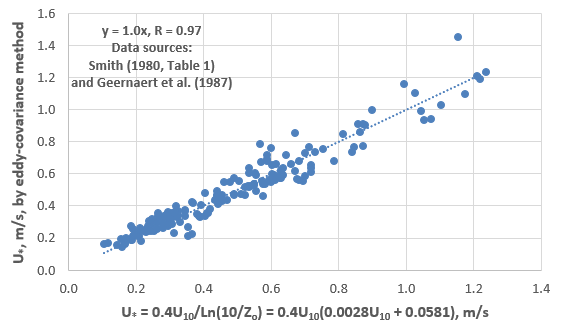 Using Eq. (3) to convert Hs to U10 for the datasets presented in [14] during Hurricane Ivan, Eq. (10) is validated in Table 2. Since the mean near-surface current is almost identical (in red) between the estimated and the measured, Eq. (10) is recommended for use in nowcasting.

On the basis of aforementioned analyses and discussions, it is concluded that

(1) Wind or waves can be nowcasted using Eq. (3) if either the wind or wave forecast is available;

(2) Overwater turbulence intensity at 10-m elevation can be nowcasted using Eq. (6) if the wind speed at 10-m is available or Eq. (7) if the significant wave height is available;

(3) Overwater friction velocity can be nowcasted using Eq. (9); and

Shih-Ang Hsu did all work.