Steady-state reservoir flow models are mathematically derived from conservation of fluid mass constraint equation given by the spatial differential condition on fluid flow velocity requiring that zero net fluid moves into and out of any given crustal unit volume,

For small α and/or porosity spatial variations, the governing flow differential equation (3) is close to the mathematically and computationally well-known and highly tractable Laplace equation ∇2P(x,y,z) = 0 and its generalisation the Poisson equation with known source term ∇2P(x,y,z) = f(x,y,z) [2]. In consequence of the numerical stability offered by small values of α and/or small spatial variations in porosity, it quickly became routine to follow the lead of heat conduction numerical modelling in using the established ‘’strong’’ methodology of finite-difference numerical approximation to poroelastic media to model crustal flow [4,5].

Of historical note in ambient crust flow computations are the introduction and persistence of the representative elementary volumes (REVs) [21] derived from effective media approximations such as dual porosity/permeability [22,23,24]. These numerical constructs of crustal flow simulation are based on pre-emptive smoothing of poroperm spatial variability, i.e., the artificial reduction or elimination of troublesome porosity structure spatial gradients [25,26]. Such pre-emptive smoothing is typically justified on the assumption that spatial variations in crustal flow properties are spatially uncorrelated and therefore subject to smoothing through spatial averaging. Where substantial spatial flow heterogeneity is required in a reservoir model, the heterogeneity is taken to define a set of distinct (and suitably uniform) formations that are sutured together in an overall flow structure. As illustrated by the widely used Tough2 flow simulation code, ‘’strong’’ formulation method finite-difference numerical flow solvers based on pre-emptive generation of numerically tractable flow property distributions remain the mainstay of present reservoir fluid flow simulation [27,28,29,30].

The Figure 1 well production frequency distributions are computed for a 2D reservoir section with standard normal distribution of reservoir porosity ranging over 0.1 < φ < 0.3 with mean φ ~ 0.2. The poro-connectivity parameter values 0 < α < 30 control the degree of flow connectivity and hence flow channelisation within the reservoir section. Low values of α correspond low degrees of flow channelisation, for which any given well has little chance of missing existing flow structures. The black fill histograms in the upper tier of Figure 1 show that for poro-connective parameter values 5 < α < 15, large percentages of wells produce at >70% of normalised unit peak flow. Low degrees of crustal flow channelisation given by the 5 < α < 15 poro-connectivity parameter range correspond to the standard hypothetical concept of spatially uncorrelated reservoir flow heterogeneity and flow modelling. In such flow media, wells can be drilled indiscriminately (e.g., on a regular drill grid as is commonplace in hydrocarbon fields) with statistically assured well production levels. Cyan fills show, however, that high α values penalise indiscriminate drilling. 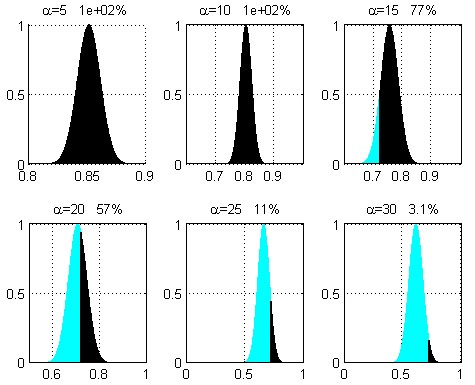 Following ambient crustal empirics (i)-(iii), actual poro-connectivity parameters are in the range 20 < α < 30 for which reservoir fluid flow is increasingly channelised. With reservoir fluid flow restricted to ever higher degrees of poro-connectivity in ever narrower flow channels, the chance that wells fail to intersect existing flow channels rises substantially. Cyan fill portions of Figure 1 lower tier histograms show that for α ~ 20 half of wells flow at productivity less than 70% of peak, with higher values 25 < α < 30 corresponding to spatially correlated flow channelling for which only 3% to 10% of wells produce greater than 70% unit peak production.

It is logical to expect that fluid flowing in the physical equivalent of our numerical simulation permeability distribution κ(x,y,z) ~ exp(αφ(x,y,z)) tracks the physical permeability structure. Flow simulations that preserve the host medium flow structure can be construed to give an ‘’accurate’’ account of wellbore coupling to the flow medium. Similarly, numerical simulation flow structures that do not preserve these properties must be presumed to be ‘’inaccurate’’. 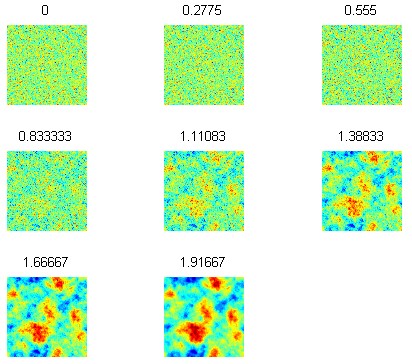 Figure 6 Sequence from upper tier left to lower tier right of 2D porosity sections according to degree of well-log power-law scaling correlation Sφ(k) ∝ 1/kβ with corresponding exponent β given above each panel. 2D permeability sections for flow computation are given by κ(x,y,z) ~ exp(αφ(x,y,z)). 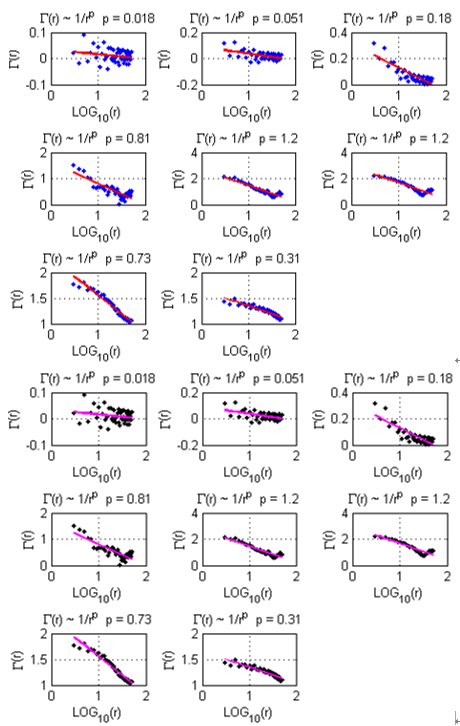 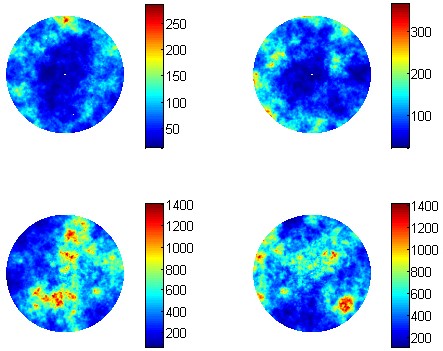 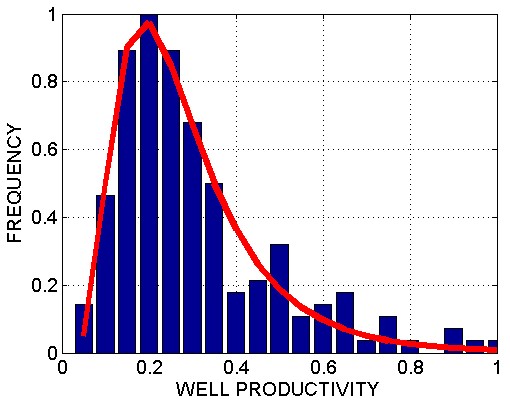 Flow channelisation effects introduced by the spatially correlated permeability fields are the outstanding feature of Figure 4 and Figure 5, with the lesser/greater spatial correlation of Figure 3 middle/right creating the lesser/greater the channelisation of Figure 4 and Figure 5, respectively. Fluids entering at the left sides of the flow sections pass across to the right side of section via spatially erratic channelised poro-connectivity pathways. Flow velocity amplitudes denoted by the colour-bar vary by an order of magnitude. It is immediately evident from Figure 4 and Figure 5 that ideally positioned production wellbores will intersect high velocity flow structures (warm tints) and avoid low velocity flow structures (cool tints). The well productivity distributions associated with the high and low flow velocities of Figure 4 give the productivity frequency distributions appearing in Figure 1 for the α = 25 value of poro-connectivity parameter.

We note in Figure 4 and Figure 5 that the two flow solvers agree in their response to the gross scale distribution of permeability of Figure 3 sections. Where there are high permeabilities in the Figure 3 distributions, there are corresponding high flow velocities in Figure 4 and Figure 5, and equivalently for low permeabilities and flow velocities. The two solvers differ in the spatial discrimination of the flow response to the permeability distributions. The Matlab-based finite-element solver [31,32,33,34,35] maintains a higher degree of contrast between high and low permeability domains than does the Matlab-based MRST solver [36,37]. The difference in velocity amplitude resolution is due to how the two solvers distribute the κ(x,y,z) ~ exp(αφ(x,y,z)) permeability heterogeneity between the computational mesh cells. The Matlab finite element solver evaluates the trial solutions globally between all mesh cells, while the MRST solver evaluates the trial solutions locally between nearest neighbour mesh cells. In principle, the finite element solver of Figure 4 and Figure 5 (left) is more accurate than the MRST solver of Figure 4 and Figure 5 (right), but the difference is likely to be less significant than other sources of modelling and observational error.

Review of the Figure 7 sequence of two-point spatial correlation distributions for the Figure 6 sequence of porosity sections shows that well-log fluctuation power spectral scaling exponent β ~ 1 observed in the ambient crust is the most efficient value for generating areas of high and low porosity given by warm/cool colours, respectively. As a general consequence of the reservoir flow structure empirical poroperm relation κ(x,y,z) ~ exp(αφ(x,y,z)), wellbores drilled into high porosity regions are systematically more permeable over wider crustal volumes and are therefore more productive than wellbores drilled into low porosity regions. This phenomenon is a mechanical picture of well productivity lognormal distribution of crustal flow empiric (iii) as seen in Figure 10.

From the ambient crust poroperm empirics (i)-(vi), we see how entrenched is the key drilling statistic observed world-wide in the form of lognormal well-productivity statistics for all crustal fluids. What we do not, however, at present know is how to proactively deal with the entrenched and inherent statistical uncertainty caused by flow channelling arising from universal spatially correlated poroperm randomness at all scales. As drilling outcome predictions based on the law of averages are poor in spatially correlated poroperm media, we can directly see from Figure 4 and Figure 5 channelised flow the need to acquire and quantify information about the large-scale reservoir flow structure if we are to reduce the overall cost of production well drilling in convective geothermal reservoirs [7].

Building on Figure 4 and Figure 5 channelised flow computations, we now return to the source of Figure 1 statistics arising from large-scale flow channelling structures in crustal reservoirs. Figure 8 and Figure 9 show 2D permeability section flow simulation data that visually quantify the drilling outcome problem posed by spatially correlated poroperm media. In composing Figure 8, we start with a km-scale poroperm distribution such as illustrated in Figure 6 for porosity spatial correlation well-log spectral scaling exponents in range 1.1 < β < 1.3 as given in flow empiric (i). Within the Figure 6 km-scale permeability section, we can compute wellbore fluid inflow for a sequence of production wellbore locations that are taken to be at the centre of 250m diameter drainage zones. Figure 8 compares two permeability distributions that are the least productive (above) with two of the most productive 250m diameter flow sections (below). Figure 9 illustrates the wellbore-centric filamentary distributions of log(flow) amplitudes for the Figure 8 permeability sections. The accompanying side-bar nominal amplitude scales show the flow sections range over a factor of 6 in permeability and factor 20 ~ e3 in wellbore flow. Figure 10 shows that the distribution of wellbore flows of the type illustrated in Figs 8-9 is lognormal, as observed for crustal reservoir flow systems worldwide as given in flow empiric (iii). In reference to Figure 1, Figure 10 shows that for a given permeability section (or volume) only the right-most handful of geothermal wells are productive in terms of spinning turbines. The need to acquire flow structure information in advance of drilling convective geothermal production wells is manifest.

In Figure 11 we illustrate the Matlab-implemented finite-element flow solver applied to 3D wellbore-centric flow modelling of heat advective flow transport at 1.5km depth in basement rock [14]. To match the steady-state temperature profile observed in the wellbore, inflow to the well was conjectured to occur at the observed temperature anomaly depths. The inflow structure was modelled as a planar zone of enhanced permeability as might be attributed to a standard ambient fracture/fault structure. Flow boundary conditions were adjusted until the model wellbore temperature profile matched the observed wellbore flow profile. The 3D finite-element flow modelling procedure provided good model matches for multiple wellbore temperature profiles, indicating that 3D fluid flow modelling in spatially complex media is feasible. 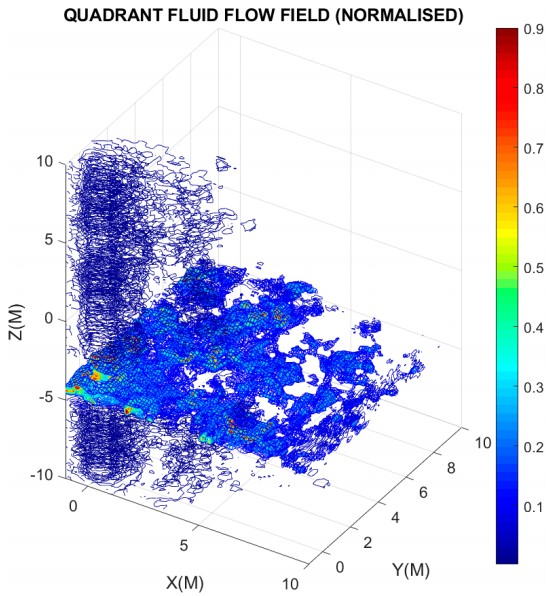 Figure 11 and Figure 12 stand as guide to using the Matlab-based finite element flow solver (or equivalent) to model flow into a convective geothermal production wellbore drilled into a km-scale crustal volume. A km-scale reservoir model volume with 256 nodes to a side can represent an actual geothermal field flow system at 4m spatial resolution through seismic emission data acquired by a multi-channel surface sensor array as outlined in [7]. The reservoir model comprises a generic 3D crustal empiric permeability number field κ(x,y,z) ~ exp(αφ(x,y,z)) that is embedded with a 3D enhanced flow structure image derived from field seismic emission data.