Scientometric Analysis of Scheduling in Renewable Energy: A Keyword and Citation Analysis

The aim of this paper is the scientometric analysis of articles on “scheduling in renewable energy” that have been published between 2000 and 2017. For this purpose, the terms “scheduling in renewable energy” and “unit commitment in renewable energy” have been searched. We have found 1009 articles in the Scopus database which include the terms mentioned above. VOSviewer and CiteSpace, as two well-known the scientometric analysis tools, have been used. Keywords analysis and citation analysis are two analysis methods that have been used in this paper. China and the US are two countries with a high contribution to this topic among other countries. Two methods of counting, including full counting and fractional counting, have been applied. Citation analysis based on countries, document, source, author, and organization have been addressed, and results have been presented. Co-authorship and co-citation analysis also have been shown. IEEE Transactions journals have the most activity in published articles on the topic, while Energy and Engineering are two subjects with the most documents. The remaining part of the paper has focused on citation analysis and co-citation analysis based on authors, documents, sources, countries, organizations, and references.

Unit commitment (UC) problem includes of specifying the optimal usage of power generating units during a scheduling time [1,2,3,4,5,6,7]. This optimization problem usually includes many constraints, such as ramp rate, minimum up/down time, minimum/maximum generating capacity, system reserve requirements, prohibited operating zones, and emission and fuel limits [8,9,10,11]. It worth mentioning that some researchers use scheduling instead of UC [12]. There are two main types of UC problems. In security-constrained unit commitment (SCUC), the main objective is satisfying load with minimum cost while considering the network security. In price-based unit commitment (PBUC), the main goal is maximizing profit [1,8,9,12].

Modern power companies are utilizing both traditional and renewable energy resources to generate electricity [13,14]. This paper presents a Scientometric analysis for articles in the area of renewable scheduling which have been published from 2000 to 2017, for this aim, VOSviewer as a scientific tool has been used [15,16,17].

The colors in Figure 1 and Figure 2 represent different time zones; red color indicates early articles, and blue color shows those that have been published before 2013. The other colors are applied for articles published between these years. 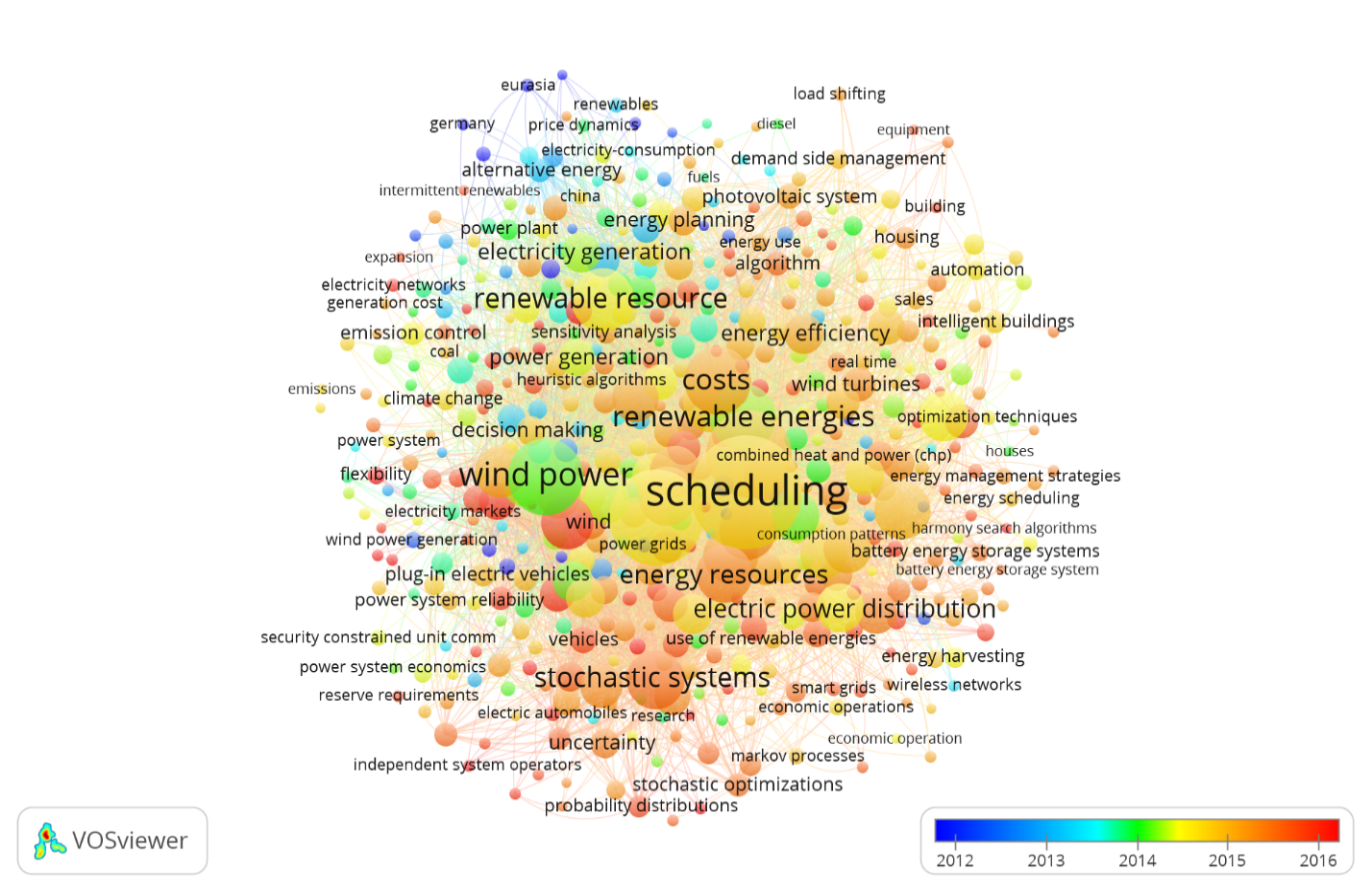 Figure 1 Network visualization of scheduling in renewable energy by the full counting method. 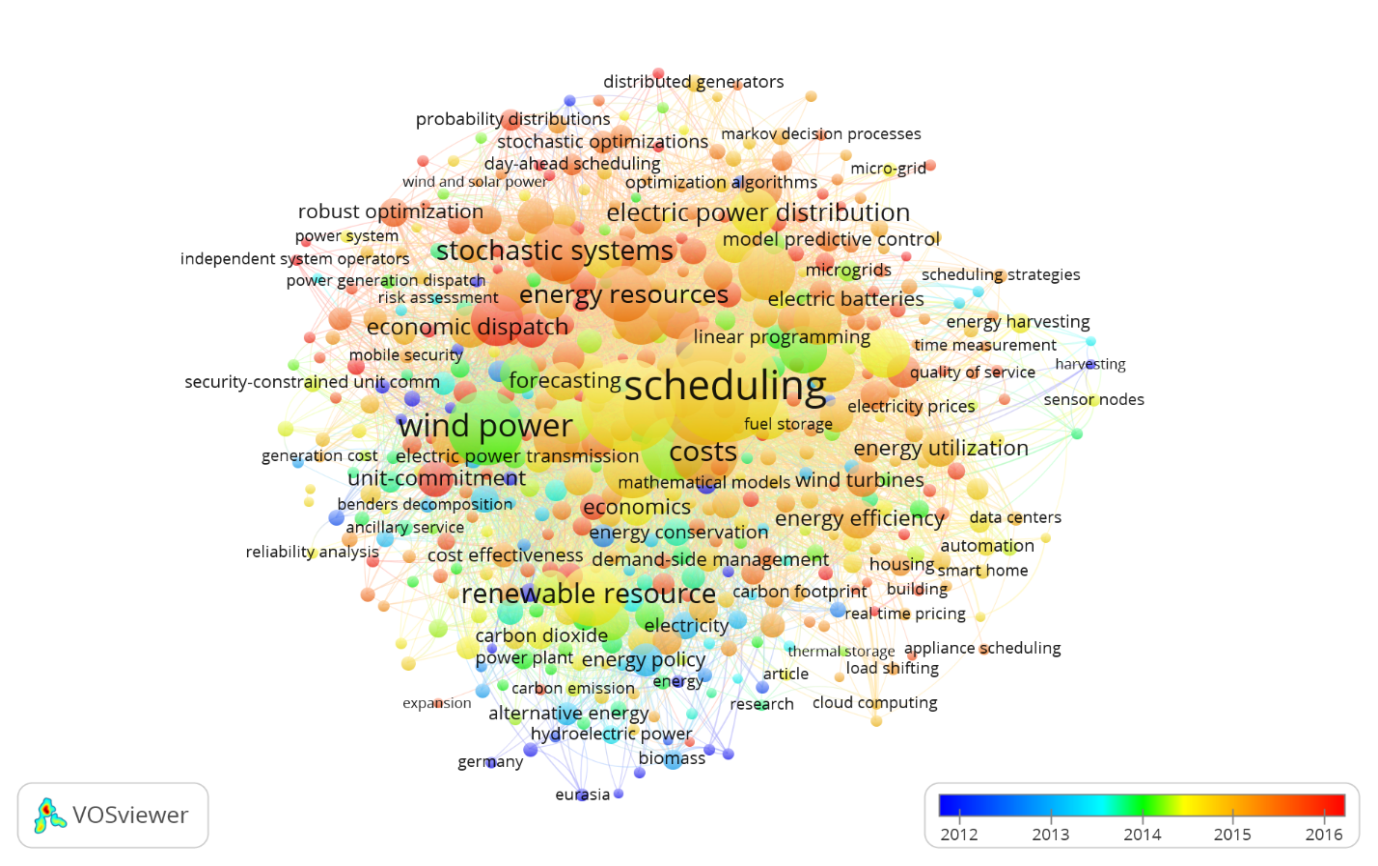 Figure 2 Network visualization of scheduling in renewable energy by the fractional counting method.

Figure 4 shows clustering regarding keywords found. The most density circles are located in the center where belongs to cluster 4 (demand-side management, tidal power), cluster 8 (grid, an hour ahead, integral part), and cluster 7 (electricity market, neural network, surveying). There is a tree path between clusters showing a growing cluster from one to another. For example, cluster 4 (demand-side management, tidal power) followed by cluster 2 (energy storage/renewable energy) from the top and followed by cluster 8 (grid, an hour ahead) from the bottom. 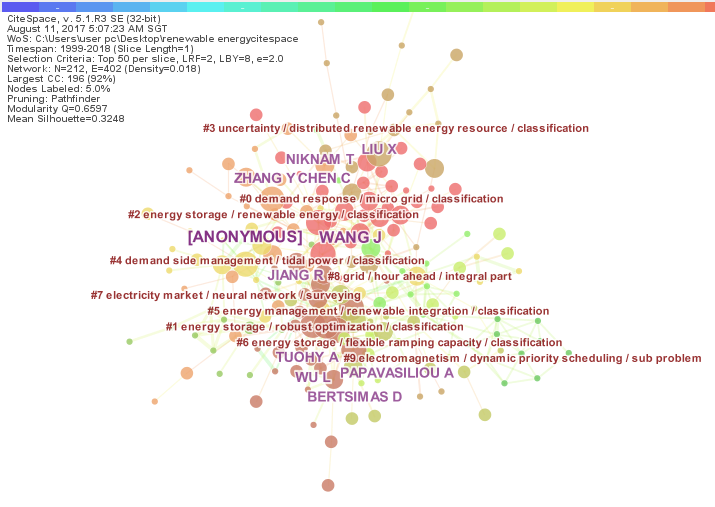 Figure 4 Clustering based on keywords.

The given pie chart in Figure 5 compares subjects in the years between 2000 and 2017. Energy is the most related subject with 55.8 percent, the next most applied subjects in this issue are Engineering, and Computer Science with 52.7 and 22.8 percent, respectively. The other subjects have been presented in Figure 5.

The given line graph in Figure 6 illustrates patterns of growing documents in the most active Journals. Overall, it can be seen from the graph that in all these journals, there is an increase in the number of documents. However, the International Journal of Electrical Power and Energy Systems shows a smooth rise in the rate, while the number of documents in Applied Energy and IEEE Transactions on Power Systems increases significantly. Figure 7 shows the co-authorship analysis for 77 countries. China and the United States have the most collaborations among the authors, while Taiwan, in this case, has less partnership with other countries. 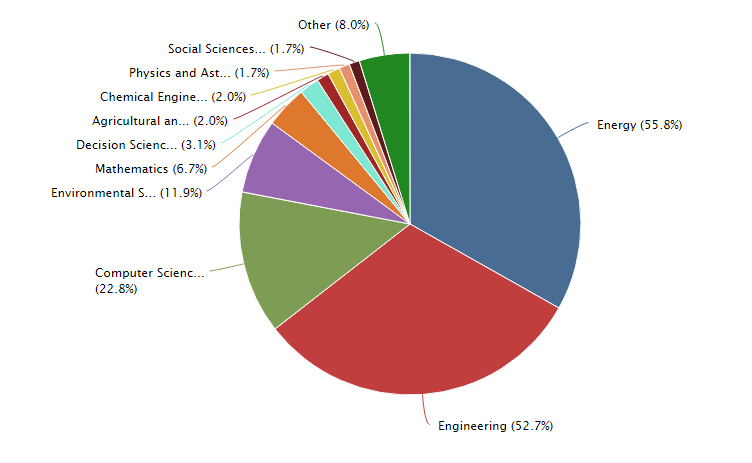 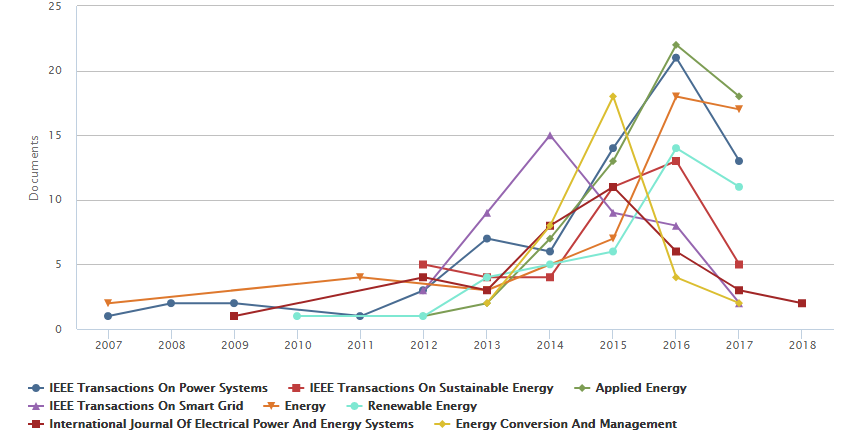 Figure 6 Documents per year by source (the most active Journals, Source: Scopus). 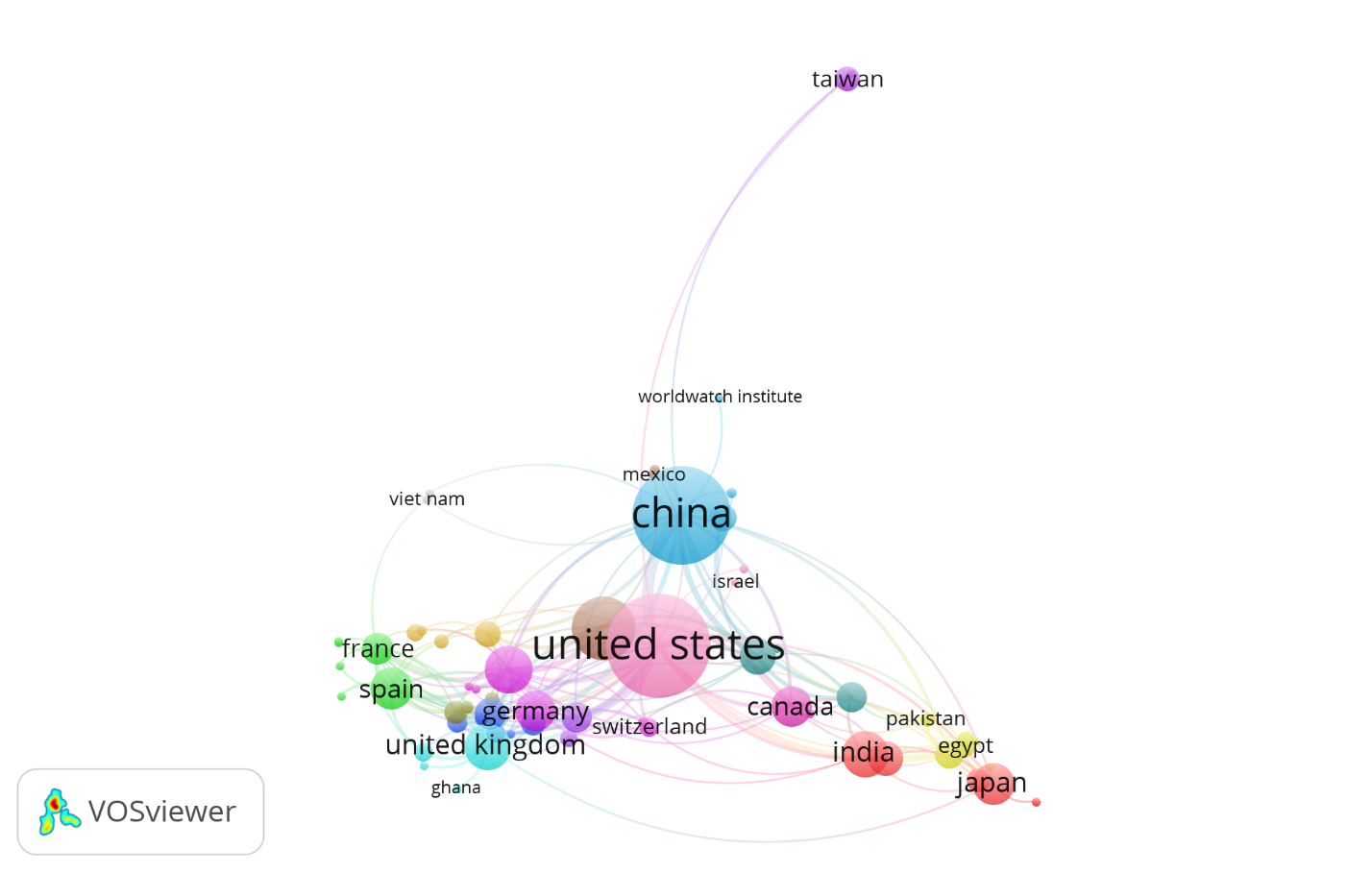 Figure 7 Co-authorship analysis of the countries. 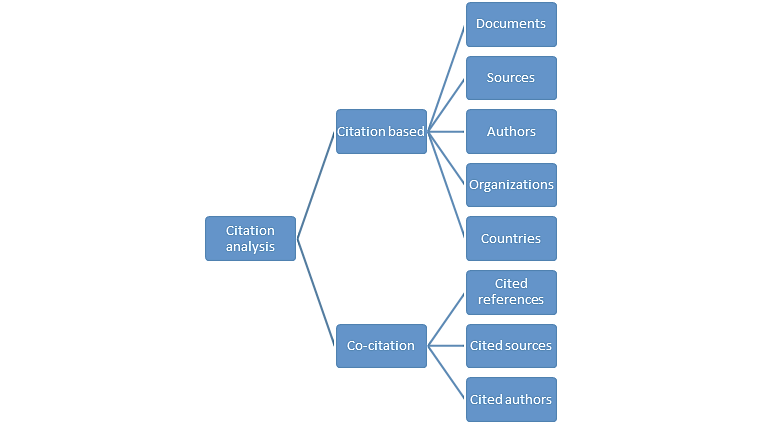 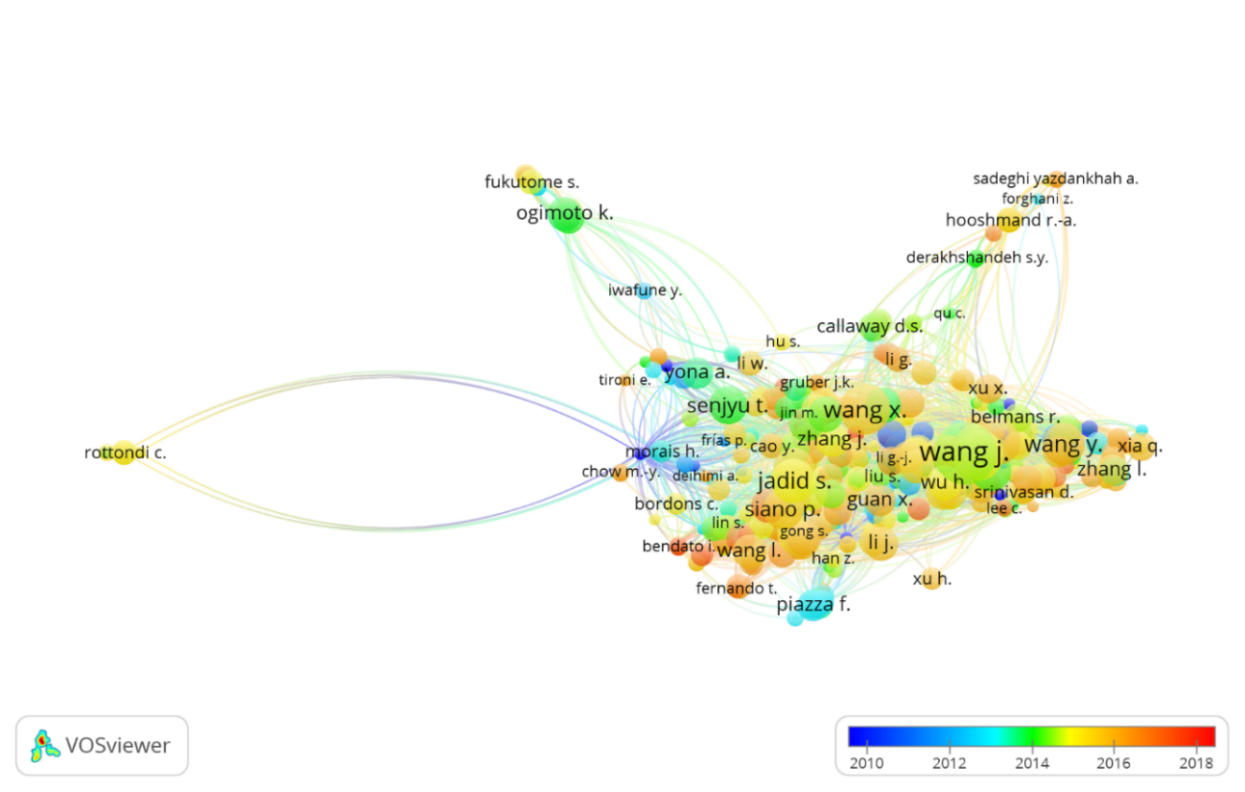 Figure 9 Clustering with a timeline view for the citation analysis based on authors.

The given Figure 9 shows the citation analysis of the authors with a timeline from 2000 with a blue color to 2017 with a red color. The areas with the strongest links are located in the center where Wang J., Wang X., and Jadid S. exist. 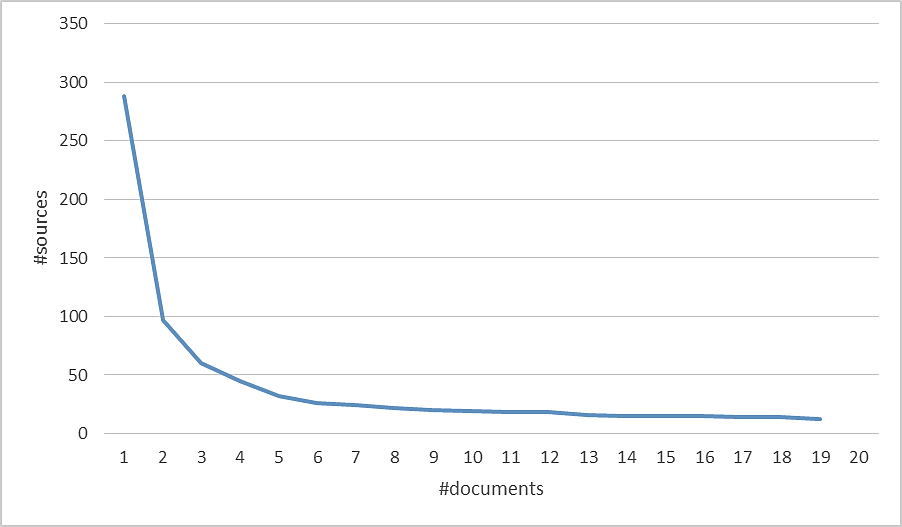 Figure 10 Number of documents for each source.

Figure 10 presents the citation analysis of the sources. In the given line graph number of documents vs. some sources have been shown. It indicates a significant decline in the number of sources from above 250 to just below 50; this number then continues to decrease smoothly. 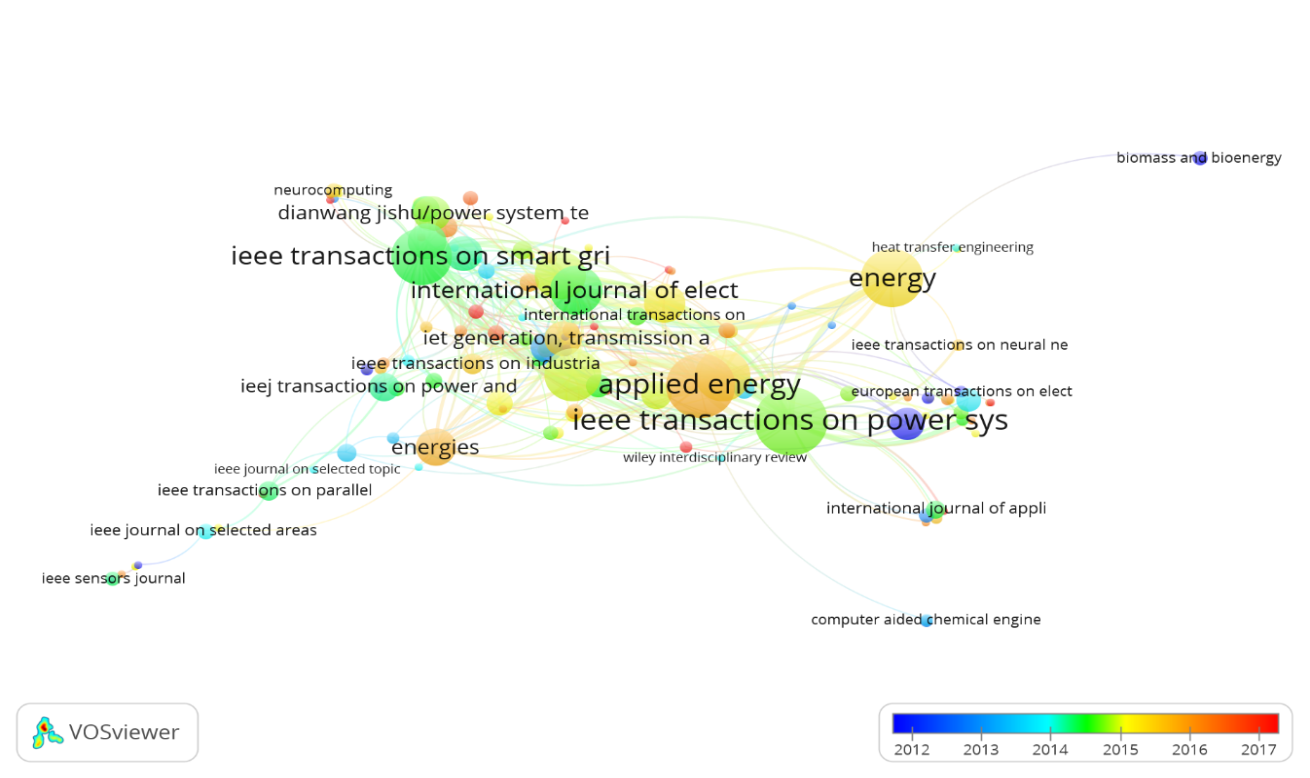 Figure 11 Citation visualization of the sources.

Figure 11 indicates a general visualization of the sources for a minimum number of at least one document. IEEE Transactions on Power System (2496), Applied Energy (638), IEEE Transactions on Smart Grid (1600), and IEEE Transactions on Sustainable Energy (721) are among the most influential journals in citations. There are 77 countries active in developing papers on the concept of “scheduling in renewable energy.” Table 3 indicates citation analysis of the countries, showing the top active countries in the topic. United States, China, Iran, Italy, the United Kingdom, and Singapore possess the most number of documents and citations for the mentioned topic.

Table 3 Citation analysis of the countries.

Table 3 Citation analysis of the countries.

Figure 12 Citation analysis of the organizations.

Figure 12 presents the citation analysis of the organizations. In the above-mentioned Figure department of electrical engineering, the department of industrial engineering, department of energy technology, and school of computer engineering have been bold and are the largest circles showing the top institutes for energy and scheduling based on citation reports. The last part of citation analysis is applied to the documents. Table 4 gives information about the citation analysis of the top articles with the highest number of citations showing the cluster they belong to and also the name of journals. The top articles belong to cluster 1 and cluster 6, where IEEE Transaction on Power Systems exists.

Table 4 Citation analysis of the documents.

Table 4 Citation analysis of the documents. 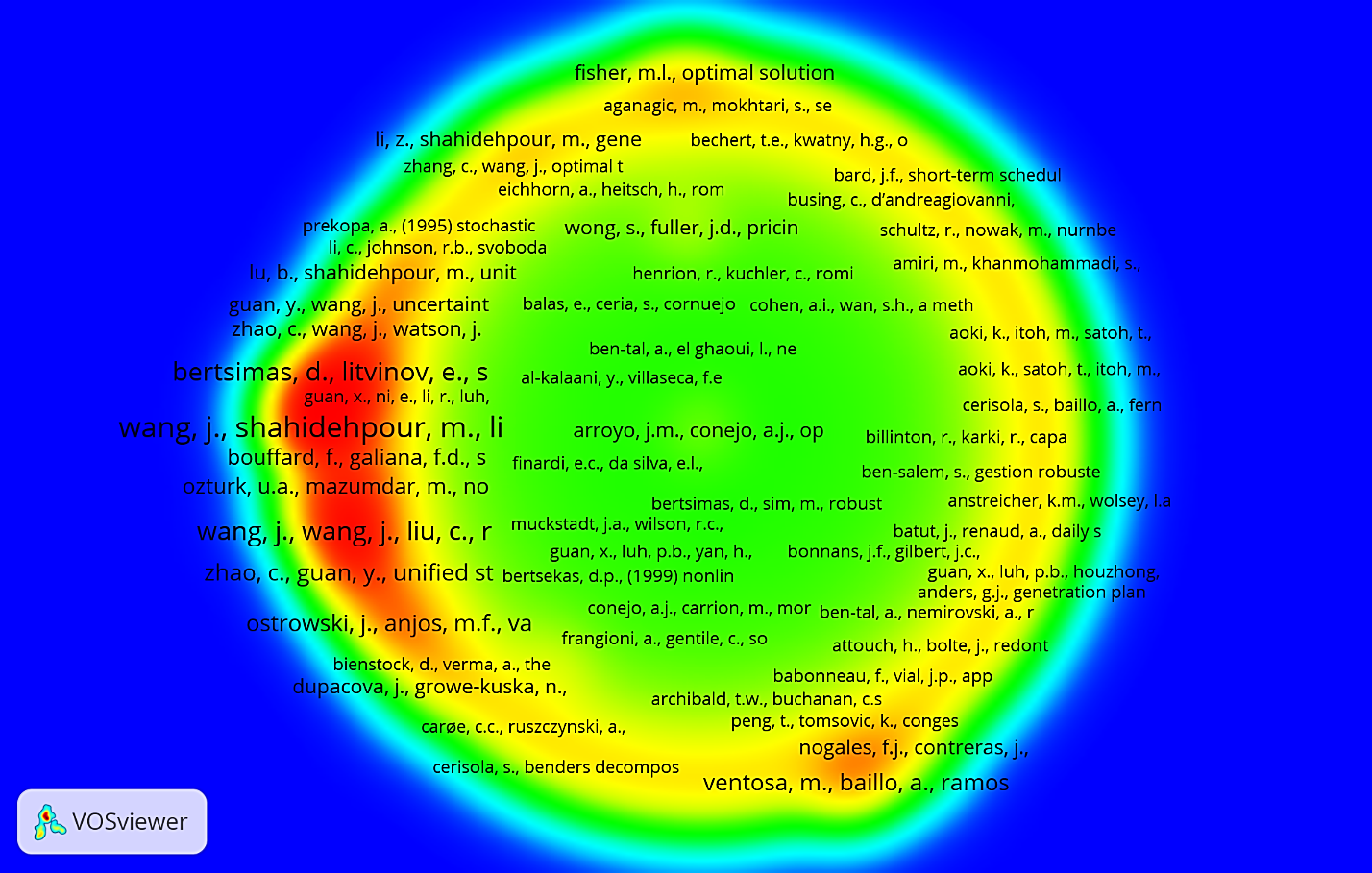 Figure 14 depicts the co-citation analysis for cited authors between the years 2000 and 2017. 28189 authors have worked on “scheduling in renewable energy.” Figure 14 indicates cited authors for a minimum number of 1 citation. The highly cited authors have been located in large green circles; for example, Wang, J. (green circle) belongs to cluster 2 with 534 citations.

The chart in Figure 15 shows changes in the number of citations versus the number of sources regarding the Co-citation analysis of the cited sources. Overall, there is a fall in the given chart. Figure 15 shows a sharp decline from 10715 sources for one citation in each source to 2019 sources for two citations in each source. However, the chart shows then smooth drop-in changes. 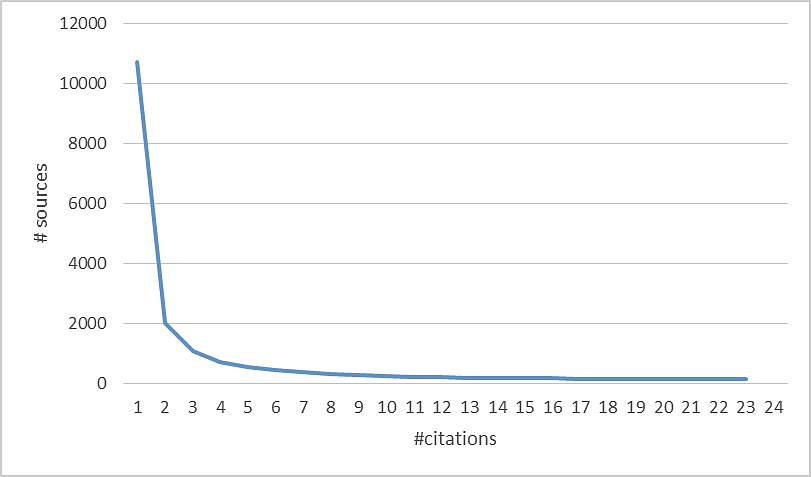 In this paper, a scientometric analysis of “scheduling in renewable energy,” for a time zone between 2000 and 2017, has been investigated. Keywords analysis and citation analysis was the purpose of this paper. For the first one, the most common keywords have been found. Two ways of full counting and fractional counting with VOSviewer software has been used, and the ten most and the ten least common used keywords have been identified. In this part, co-authorship collaboration between countries also has been applied resulting in identifying China and the United States as countries with the highest contribution to the topic. Moreover, IEEE Transactions journals have been identified as the most activity in published articles in the field, while Energy and Engineering are two subjects with the most published articles. The second part of the analysis covers citation analysis and co-citation analysis; for this purpose, citation analysis has been categorized based on country, document, source, author, and organization. For co-citation analysis, three units, including cited references, cited authors, and cited sources, have been analyzed; for example, the highest number of cited references, Shahidehpour M., Wang J., and Litvinov E. have been identified. As a future direction, it is suggested to use other review techniques such as systematic review, bibliometric review, etc. However, the review could be addressed on the specific fields of renewable energy including biomass, solar, wind, etc.

The authors confirm that no competing interests exist.