Sleep has played a critical role in maintaining the physical and psychological health of humans, especially for women. Many studies reveal that sleep disturbance can cause more inflammation, coagulation, insulin resistance, and psychosocial distress in women than in men. A lot of medications are used to treat sleep disorders, but they can cause various adverse effects. Photobiomodulation therapy (PBMT) has been proved as a safe and easy-to-use therapy. We propose two methods of affecting the autonomic nervous system and brain waves, with single laser acupuncture and array laser stimulation, respectively. These two methods were applied to a woman who suffered from sleep problems and being overworked. New applications for these two methods are also proposed in this article.

In recent years, low level laser (or light) therapy (LLLT) has seen gradual, but not wide, acceptance. The new name for LLLT, photobiomodulation therapy (PBMT), has been recommended by the World Association for photobiomoduLation Therapy (WALT). Laser Acupuncture (LA) has been defined as “photonic stimulation of acupuncture points and areas to initiate therapeutic effects similar to that of needle acupuncture and related therapies together with the benefits of PhotoBioModulation (PBM)” [1]. The molecular, cellular, and tissular mechanisms caused by PBMT are summarized in review articles [2,3]. The mechanisms and conduction pathways caused by traditional needle acupuncture are summarized by Prof. Chang [4]. LA has similar clinical effects to classical needling [5], but LA is safer than needles. As we know, PBMT is non-invasive, easy to use, and painless. This therapy is very suitable for women and children who are afraid of the pain caused by needles. It can be applied to treat some chronic diseases and reduce some symptoms. In this article, some studies conducted by the author will be introduced and reviewed briefly. Additionally, new applications of PBMT for women and children will be proposed.

In 2009, we used a single laser (operated at 10 Hz, wavelength 830 nm, output power 30mW) to radiate the Neiguan acupoint on night shift workers [6]. Their parasympathetic nervous system (PSN) and heart rate variability (HRV) were adjusted, as shown in Figure 1(a). There were significant improvements in PSN (expressed in HF) after treatment and after the 30-min rest period in the laser group as shown in Figure 2(a). However, a significant improvement in HRV (expressed in SDNN) was not seen in two-point discrimination in either group as shown in Figure 2(b), but it had tendency. The major conduction pathway in this study was meridian.

In 2012, we used an array laser (6 piece laser diodes, each one with the same specification as mentioned above, but with an output power of 7mW per diode) to radiate the left palm of the subjects, as shown in Figure 1(b). Their brain waves changed. In particular, the α band increased in some regions, as shown in the lower right corner, and the β band decreased for normal subjects in the open eyes condition [7]. In this study, the conduction pathway was complicated, including nerve and meridian conduction. 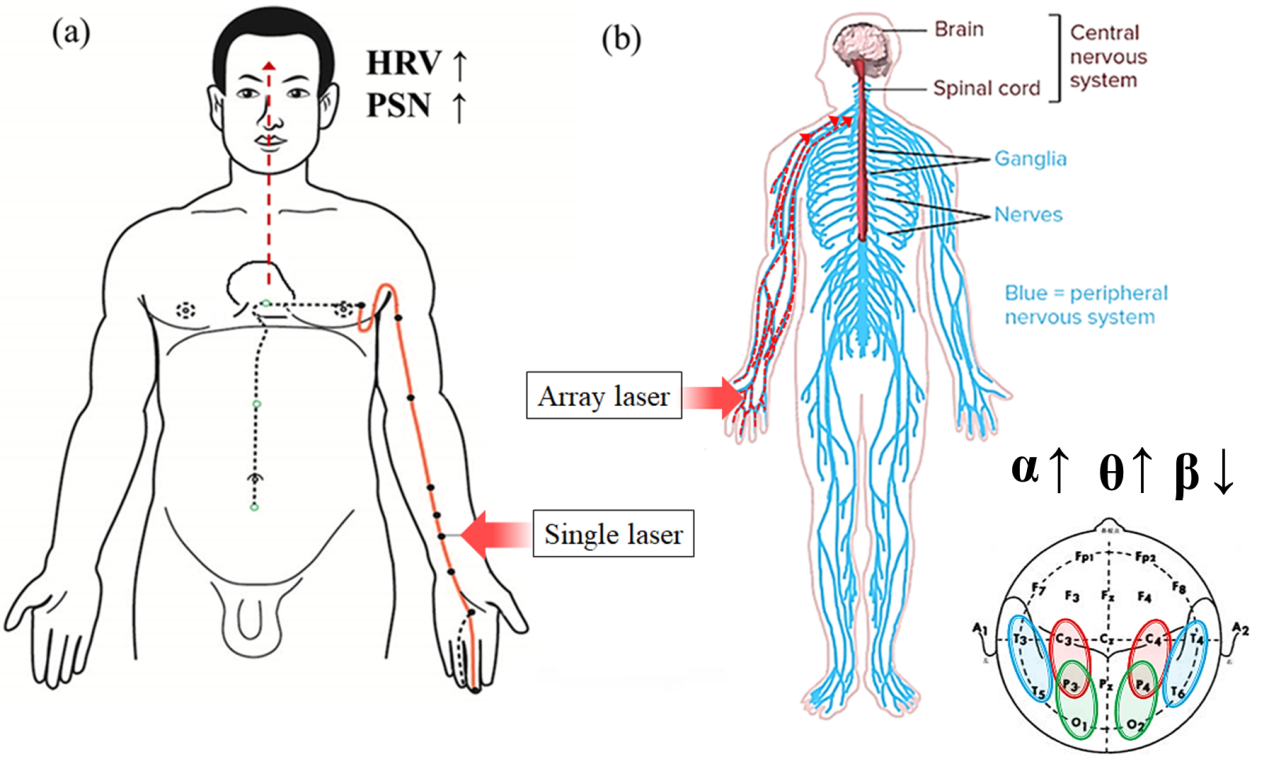 Based on the two studies mentioned above, a 52-year-old female as shown in Figure 3(a), who was overworked and had sleep problems, accepted the treatment. The PBMT device (manufactured by Wellmike Industries Co., Ltd, Model: ID310) had a wavelength of 830nm and an output power of 30mW per laser diode. This array laser consisted of 7 laser diodes with an operational frequency of 10 Hz, and a duty cycle of 50%. The dosage was applied for 10 minutes at 9.7 joules per single laser diode; this treatment is similar to the laser specifications we used in our previous studies. After 6 months of this treatment, all of the patient’s symptoms had been resolved and her facial features also saw improvement with laser treatment, as shown in Figure 3(b). The main treatment included an array laser stimulation on the palm, Neiguan (PC6), and Zusanli (ST36) acupoints treated with single laser once a day. 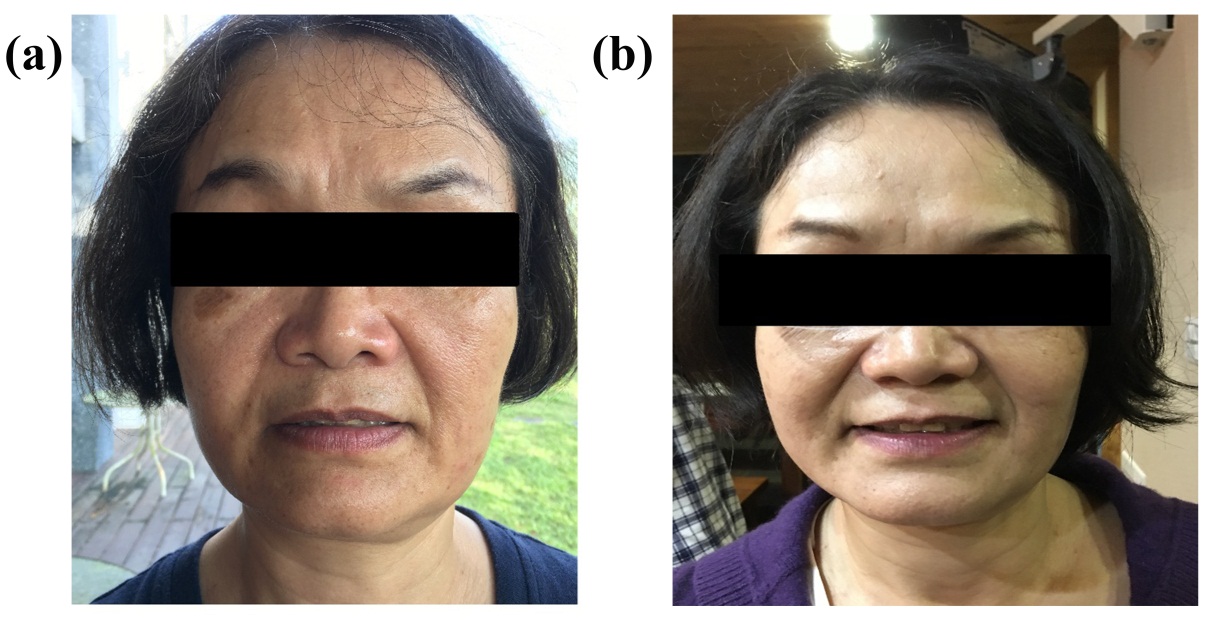 Figure 3 (a) Before laser treatment. (b) After 6 months of treatment.

In our other studies, PBMT was proven to relieve pain and improve the healing process of closed bone fractures (CBFs) in the human wrist and hand using 830nm diode lasers ﬁve times per week for 2 weeks [8]. In addition, PBMT was effective in alleviating pain and symptoms, and improving functional ability and finger and hand strength for mild and moderate carpal tunnel syndrome (CTS) patients with no side effects [9,10]. A systematic review and meta-analysis results revealed that applying PBMT on tender points or myofascial trigger points (MTrPs) is an effective means to improve the effect size (ES) of pain release after treatment and follow-up [11]. In 2011, we used laser acupuncture stimulation on the left foot’s Yongquan (KI1) acupoint and verified the effect by functional magnetic resonance imaging (fMRI) analysis.  The results showed that the inferior parietal lobule, the primary somatosensory cortex, and the precuneus of the left parietal lobe in the continue wave group found signiﬁcant activations. The primary motor cortex and middle temporal gyrus of the left hemisphere and bilateral cuneus in the 10Hz-modulated wave group also found signiﬁcant activations [12]. PBMT is effective on low back pain relief after radiating on Weizhong (BL40) and Ashi acupoints for 10 minutes in a five day treatment [13]. In 2013, we found a pronounced decrease in the EEG power in the α-bandwidth during laser simulation in closed eyes subjects; the EEG power in the beta-bandwidth in the right occipital area also decreased significantly in the laser group. PBMT stimulation might be conducive to helping people fall asleep with patients with sleep problems [14]. In 2017, laser acupuncture plus cupping at the Weizhong and Ashi acupoints effectively reduced pain and inflammation in chronic nonspecific low back pain by cortisol level and visual analog scale (VAS) analysis [15]. In 2018, a plantar incision (PI) model using rats was used to mimic human postsurgical pain with 830nm and 650nm LA treatments on Zusanli acupoints. The results showed that all LA treatments attenuated post-PI tactile allodynia in the ipsilateral paw. LA is effective in alleviating pain and some pain relief mechanisms caused by LA were discovered [16]. From many scientific reports and our studies, PBMT is an easy to use alternative medicine with a high potential to treat chronic diseases.The formula, based on traditional Chinese medicine, should be better defined using clinical trials.

Most people are living in a stressful world. Many people are chronically sleep deprived. Sleep disturbance can cause inflammation coagulation, insulin resistance, and psychosocial distress in women more so than in men [17]. The two studies we propose above have the potential to change parasympathetic nervous systems (PSN) and brain waves with PBMT. These treatments can be applied to women who experience stress and have sleep problems. It may also be applied to treat children who have Attention Deficit Hyperactivity Disorder (ADHD). I believe many chronic diseases can be prevented or resolved with PBMT and LA in the future, especially for women and children.