A three-arm, parallel-group randomized controlled intervention was employed. This study was approved by the authors’ institutional review board. All participants provided written consent prior to participation.

Participants were randomized into one of three groups, including 1) Interference + Exercise, 2) Interference Only, and 3) Control (no interference and no exercise). The interference component refers to the concurrent memory interference stimuli. Further details are described below.

In total, 50 participants were recruited, including 17, 16, and 17 in the Interference + Exercise, Interference Only, and Control groups, respectively. Recruitment occurred via a convenience-based, non-probability sampling approach (classroom announcement and word-of-mouth). Participants included undergraduate and graduate students between the ages of 18 and 35 yrs.

Exercised within 5 hours of testing [24]

Consumed caffeine within 3 hours of testing [25]

A schematic of the experimental protocol is shown in Figure 1 and detailed hereafter.

Interference + Exercise. Participants exercised for 15-minutes on a treadmill (details described below). Afterward, they rested (seated) for 5-minutes while playing Sudoku (details described below). After this 5-minute rest period, we employed a cognitive paradigm that resembles the dual-task paradigm. Participants completed a computerized Stroop task (word-color). This task took approximately 3-minutes to complete. They first completed this entire task as a familiarization trial. After completing the familiarization trial, they re-completed the task. At the 30-second point into this task, they listened to a pre-recorded list of 15-words (1.5 seconds per word) via headphones. After a 10-second delay, the re-listened to the list a second time and then immediately performed a free-recall (short-term memory). Following this, they finished completing the Stroop task. Afterward, they watch a video clip (“The Office – Bloopers”) for 20-minutes (as a distractor) and then were asked to recall as many words as possible from the word list. 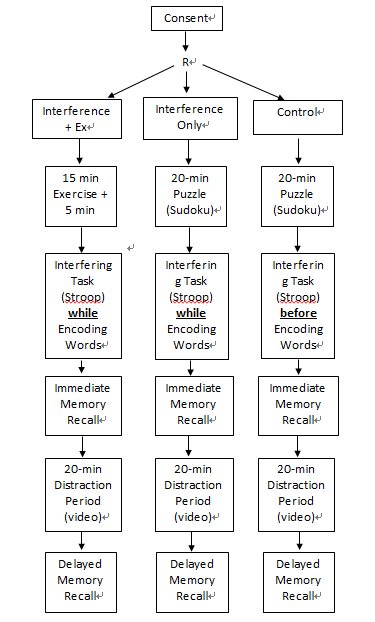 Figure 1 Schematic of the study protocol.

Notably, at the beginning of the task, they were instructed as follows: “You are now going to complete a practice trial of the Stroop task. It should take approximately 3-minutes. After you complete this practice trial, you will re-complete this task. While completing this task the second time, you will hear a recording of 15-words through the headphones. This recording will play twice. Please do your best to try and remember as many of these words as possible, as later in the experiment you will be asked to recall these words. It is also important that you do your best on the Stroop task. Thus, try and focus on both tasks (Stroop and listening to the words) at the same time. Both tasks are of equal importance as we will be evaluating your scores on both tasks.”

Interference Only. This group completed the same protocol as the Interference + Exercise Group, with the exception that they did not exercise. Instead of exercising for 15-minutes followed by a 5-minute rest period (above group), they played Sudoku for 20-minutes before starting the Stroop task.

No Interference and No Exercise (control). This group played Sudoku for 20-minutes. Then they completed two rounds of the Stroop task (results from the second Stroop task were recorded). After completing the second Stroop task, they listened to the word list twice (10-sec break). After listening to the word lists, they performed an immediate free-recall and then watched a video clip (“The Office – Bloopers”) for 20-minutes. Following this, they were asked to recall as many words as possible from the word list.

Participants randomized to the exercise group exercised (brisk walk) on a treadmill for 15 minutes. Participants exercised at approximately 70% of their estimated HR max (220-age), which constitutes moderate-intensity exercise [29]. The target heart rate was calculated prior to the exercise bout and the treadmill incline and speed were altered at the very beginning of the exercise to ensure heart rate approached the target level within the first few minutes of exercise.

The Sudoku task involved a medium-level, on-line administered, Sudoku puzzle. The website for this puzzle is located here: https://www.websudoku.com/

Word List Task. 15 words were extracted from the Toronto Word Pool, all with imagery scores > 5. Participants listened to these words, delivered at a rate of 1 word per 1.5 seconds, via headphones. Previous research demonstrates evidence of test-retest reliability for related word-list memory tasks [31].

Stroop Task. The Stroop color word test is a well-documented prefrontal activation task indicative of executive function [32], which demonstrates adequate psychometric properties [33]. Testing of the Stroop effect was performed using computerized software. Specifically, the color word Stroop testing with keyboard responding was used. Participants were given color words (e.g. “red”) written in color and asked to indicate the color of the word (not its meaning) by specific key presses. They were instructed to accomplish this as quickly and accurately as possible. There were 84 total trials, consisting of 4 colors (red, green, blue, black) x 3 color-stem congruency (congruent, incongruent, control) x 7 repetitions. The stimuli remained on the screen until the key response, with latencies measured from the onset of the stimuli. The congruent trials involved the color word and the color it presented being the same; incongruent trials involved the color word being different than the color it was presented in (e.g., it read GREEN, but this word was not in the green color); and the control trials involved colored rectangles. The outcome measure was the average latency (in milliseconds [ms]) of the correctly identified congruent, incongruent and control trials.

Various demographic (e.g., BMI), behavioral (e.g., habitual physical activity and resistance exercise) and psychological (e.g., RPE) assessments were completed to ensure that the groups were similar on these parameters. As a measure of habitual physical activity behavior, participants completed the Physical Activity Vital Signs Questionnaire to evaluate time spent per week in moderate-to-vigorous physical activity (MVPA) [34]. Height/weight (BMI; kg/m2) were measured to provide anthropometric characteristics of the sample. Lastly, before and after the exercise and control conditions, heart rate (chest-strapped Polar monitor, F1 model) was assessed.

All statistical analyses were computed in Stata (v. 12). A one-way ANOVA was used to compare the Stroop scores across the three groups, with Bonferroni-corrected post-hoc tests employed.  A one-way repeated measures ANOVA was employed for the word-list task.  Main effects for time and group, as well as group by time interaction effects, were evaluated. Statistical significance was set at an alpha of 0.05. Partial eta-square (η2p) was calculated as an estimate of effect size.

Table 1 displays the demographic characteristics of the analyzed sample. The mean (SD) age of the entire sample was 21.3 (1.6) yrs, with the sample being predominately female (60%). There were no statistically significant differences for the demographic or behavioral characteristics across the 3 conditions; however, gender approached statistical significance (P=0.05).

Table 1 Characteristics of the sample.

Table 1 Characteristics of the sample.

Values in parentheses are standard deviations

Table 2 displays the physiological (heart rate) responses to the exercise and control conditions. There was a statistically significant time by group interaction (F=111.3, P<0.001, η2p=0.83). That is, non-exercise conditions (Interference Only and Control) had steady heart rates over the 20-minute period (prior to cognitive assessment), while the exercise condition increased their heart rate from 76.7 (9.2) to 130.4 (14.1) bpm.

Values in parentheses are standard deviations.

Values in parentheses are standard deviations. 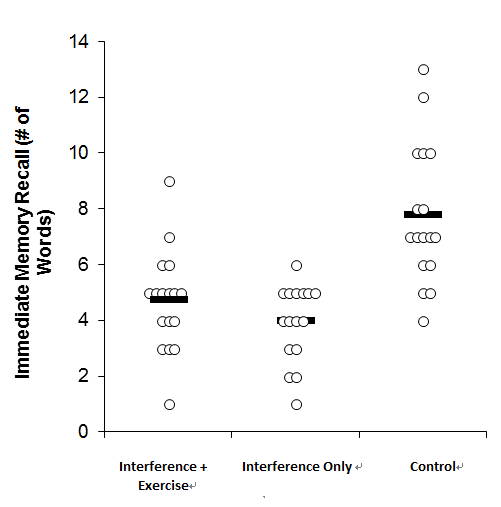 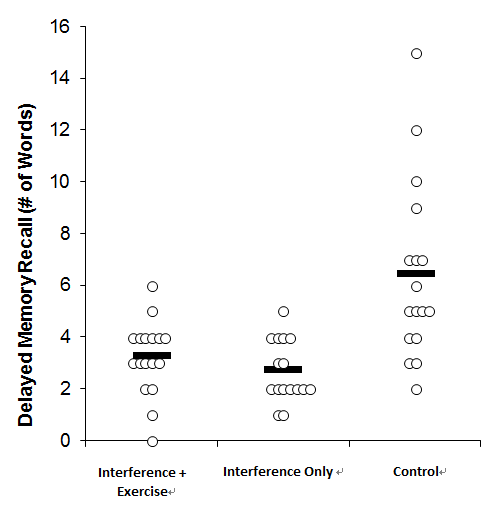 Limitations of this study include the relatively small homogenous sample, which may limit our study’s generalizability and statistical power. Thus, future work should consider expanding this line of inquiry to other, more diverse populations. Such work should also consider evaluating a bout of higher-intensity exercise, which may have a greater effect on attenuating concurrent memory interference.

Author H.L. collected the data. Authors H.L. and L.C. provided feedback on the manuscript. Author P.L. supervised the project and drafted the manuscript.