A 16 year old girl was evaluated for intractable hiccups for 6 six months, with a prior negative clinical and laboratory evaluation, and without any improvement with a variety of folk and medicinal therapies. A single treatment session of auriculotherapy produced a full clinical remission.

A 16 year old girl was brought by her mother for neurological consultation for intractable hiccups for six months. The onset was spontaneous, unrelated to any accident or medical illness. The patient had no complaint other than constant, intractable hiccups. She denied headache, dizziness, swallowing difficulties, respiratory problems, or focal neurological symptoms. Hiccups seemed to dissipate during sleep. For hiccups she had previously consulted with her pediatrician, a gastroenterologist, and a psychologist. Her physical examination was reported to be normal. Her clinical evaluation included an upper GI endoscopy, a brain MRI scan, a chest CT scan, and various blood tests, all giving negative results. Prior attempts at folk therapy including rebreathing into a paper bag and breath-holding were unsuccessful. She also had had trials of baclofen, chlorpromazine, metoclopramide, a proton pump inhibitor, and an anticonvulsant agent, none of which provided relief.

At the time of consultation, the neurological examination revealed almost constant hiccuping, but was otherwise unremarkable. During the ensuing discussion, I told the patient and her mother that her evaluation had been extensive and thorough. I had recently learned a French auricular acupuncture technique for the treatment of hiccups, which I proposed to the family.

The protocol selected was taught to me by Dr. David Alimi, then the director of the Inter-University Diploma (DIU) in Auriculotherapy program at the University of Paris XIII, in Paris, France. Points selected on the medial aspect of the auricle of the ear included: the motor myelotome points of C3, C4, and C5, the motor myelotome point of C7, and the motor diaphragm point. Treatment was bilateral, and involved preparing the pinna with alcohol, followed by the placement of so-called semi-permanent (ASP) needles. The patient tolerated the procedure well.

Approximately two hours after the above auriculotherapy treatment was given, the patient’s incredulous mother called me to let me know that her daughter’s hiccups had completely stopped. About a week later, I chanced to meet her mother again, who told me that the patient had had a single thirty minute relapse of hiccups, followed by a subsequent total remission of symptoms. The single auriculotherapy protocol had apparently cured this young patient of her intractable hiccups.

Hiccups involve spasmodic, repetitive contractions of the diaphragm, followed by an abrupt closure of the glottis, which interrupts airflow, producing a characteristic sound. Uncommonly, idiopathic hiccups may be intractable, as in this case.

Auricular acupuncture is a form of reflex therapy in which acupuncture points in the skin of the pinna are stimulated, most commonly by the placement of needles, although other forms of point stimulation exist. The French physician who first described and named auriculotherapy, Dr. Paul Nogier, also developed a special needle, which he called the ASP needle. This 2mm needle has a mini-barb at the tip, which causes the needle to be retained in the skin for hours, days, sometimes even weeks, before ultimately falling out. This is a relatively safe therapy in competent hands, with a low risk of infection or other complications.

The neurophysiological basis of auricular acupuncture was described by Dr. Nogier to involve a somatotopic auricular representation of the cerebral cortical sensorimotor homunculus of Penfield at the skin of the ear, due to bidromic neural connectivity via the reticular formation of the brain. By stimulating ear acupoints, reflexive CNS responses are induced, leading to neurally-mediated homeostatic reactions of repair.

The auriculotherapeutic formulation of treatment point targets is based on a biomedical approach. A history and physical examination are carried out, followed by appropriate laboratory investigations, and ultimately a clinical diagnosis. The treatment is guided in particular by neurophysiological principles. This treatment approach differs from that of auricular acupuncture based on the principles of traditional Chinese medicine. The present case involves hiccups related to diaphragmatic dysfunction. The diaphragm is innervated by the phrenic nerve, explaining the selection of ear somatotopic spinal motor acupoints C3, C4, and C5, the central nervous system spinal segments of which provide the motor roots to this nerve. The ear somatotopic brachial plexus motor point C7 was selected as this motor spinal cord segment has a neurophysiological relationship with the more superior segments. The ear somatotopic motor diaphragm point was selected because diaphragmatic contraction underlies the hiccup phenomenon (see Figure 1). All points were treated bilaterally. This hiccups protocol and the cartography used for its illustration have been published by Dr. Alimi [1]. 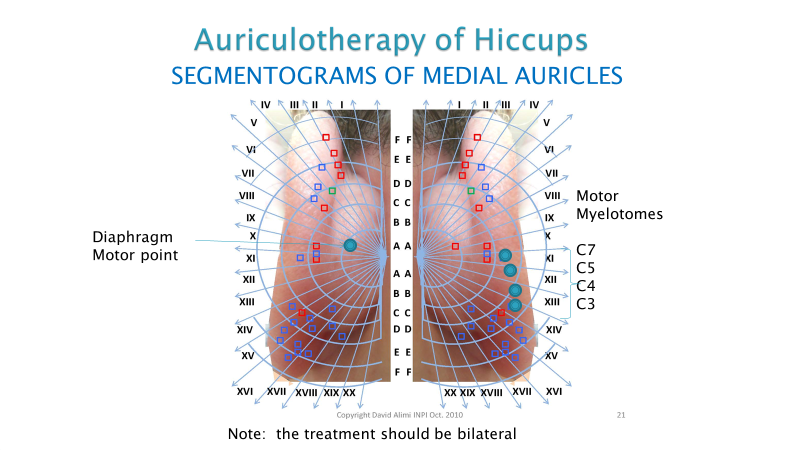 The acupoints selected in this protocol are located in auricular skin innervated by branches of the mandibular division of the trigeminal nerve, and the superficial cervical plexus (especially fibers from C2, C3, and C4 spinal roots). Given the favorable outcome of auriculotherapy in this case report, one may reasonably infer that the corresponding segments of the brainstem and spinal cord, upon auricular stimulation, may provide reflexive inhibitory pathways to the CNS medullary centers that underlie hiccups.

Intractable hiccups are uncommon, and I have not had the opportunity to treat this condition since. However, once while watching television with my 15 year old son, he began hiccuping, and I proposed an ear acupuncture treatment. He declined an acupuncture needle, but agreed to acupressure. I applied pressure stimulation to the motor diaphragm point of his right ear, and within 2 or 3 minutes, his hiccuping stopped.

Auriculotherapy is a relatively safe, potentially first-line approach to the treatment of intractable hiccups. However, treatment should always follow a standard medical history and physical examination, ancillary investigations if indicated, and formulation of a clinical diagnosis.

Stanton G did all work.