© 2016 by the authors. This is an open access article distributed under the conditions of the Creative Commons by Attribution License, which permits unrestricted use, distribution, and reproduction in any medium or format, provided the original work is correctly cited.

(1) Background: Within this study, we assessed the effects of acupuncture on heart rate variability (HRV) in Chinese post-stroke patients.

(2) Methods: In 30 Chinese post-stroke patients (14 f, 16 m; mean age ± SD 64.3 ± 3.8 years; range 40 – 80 years) electrocardiographic signals before, during and after acupuncture at the left Weizhong acupoint (BL40) were recorded in Harbin and analyzed in Graz using teleacupuncture via internet. HRV data were analyzed in the time and frequency domain and a protocol from Austria was sent to the team in China immediately after the treatment and recording session.

(4) Conclusions: This study shows that HRV could be a useful parameter for quantifying regulatory effects of acupuncture on the autonomic nervous system. Together, our findings showed that acupuncture of the Weizhong point on the left side of the patients after cerebral infarction has no obvious influence on the heart rate and total HRV, but has an inhibitory effect on the vagus and excitatory effect on the sympathetic nerve.

The technology of teleacupuncture has been implemented at the TCM Research Center Graz in Austria in cooperation with Heilongjiang University of Chinese Medicine in Harbin and the China Academy of Chinese Medical Sciences in Beijing, China [1,2,3]. In China, electrocardiograms (ECGs) are recorded and the data are transferred via internet to the Medical University of Graz immediately following the acupuncture treatment. In Graz, the analysis of the ECGs is performed. The acupuncturists in China are informed about the results of the analysis immediately and the success of the therapy can be demonstrated objectively. Teleacupuncture, on the one hand, bridges Eastern and Western medicine and, on the other hand, science and practice; it may also contribute to the omission of redundant research studies and a simplification of the diagnostic and therapeutic procedure, thereby not only cutting costs but also saving time [4]. The latest HRV-related acupuncture research findings can be found in a new book released in July 2016 [4].

This paper describes the results from teleacupuncture measurements in post-stroke patients using computer-based heart rate variability (HRV) recordings before, during and after acupuncture under standardized clinical conditions in Harbin, China. Data analyses were performed in Graz, Austria.

The study was approved by the Ethics Committee of Heilongjiang University of Chinese Medicine (No 2010HZYLL-030) and carried out in compliance with the Declaration of Helsinki. All patients provided oral informed consent after they were informed about the nature of the investigations as far as the study design allowed.

We investigated 30 adult post-stroke (Chinese diagnosis ‘Zhong Feng’) patients (14 female, 16 male; mean age ± SD: 64.3 ± 3.8 years; range: 40 ─ 80 years) who received acupuncture treatment. This diagnosis means that all patients had wind stroke (Zhong Feng) attacking the channels and collaterals caused by increased liver yang and kidney yin deficiency. The patients were not under the influence of centrally acting medications, and none of them had a body temperature out of the normal range.

Biosignal Recording in China and Data Analysis in Austria

The HRV is measured during a special time period (5 min), and thus determined. Electrocardiographic (ECG) recording was performed using three adhesive electrodes which were applied to the chest. The Chinese researchers used a medilog® AR12 HRV (Huntleigh Healthcare, Cardiff, United Kingdom) system from the TCM Research Center in Graz for the common investigations.

The raw data were stored digitally on a memory card. After removing the card from the portable system, the data were read by a card reader connected with a standard computer in China and then transferred to the TCM Research Center Graz via internet. The signals were analyzed and HRV was displayed in a way to help to evaluate the function of the autonomic nervous system which helps to show how well the human body reacts to sport, stress, recovery and also acupuncture [4,5]. The standard deviation of normal to normal (SDNN), total power (TP), high frequency (HF), low frequency (LF) and the LF/HF ratio of HRV were chosen as the evaluation parameters [6,7].

All patients received manual needle acupuncture at the acupoint Weizhong (BL40) on the left bladder meridian. Weizhong is located in the middle of the popliteal fossa, between the tendons of biceps femoris and semitendinosus (Figure 1). Its use is indicated for example in cases of lumbago and sciatica. Sterile single-use needles (0.30 × 30 mm; Huan Qiu, Suzhou, China) were used. Needling was performed perpendicularly (depth about 15 mm), and the needle was stimulated clockwise and counterclockwise for 15 seconds each stimulation, with six rotations per second, resulting in 90 rotations per stimulation. Stimulation was done immediately after inserting the needle, 10 minutes later and before removing the needle (Figure 2). 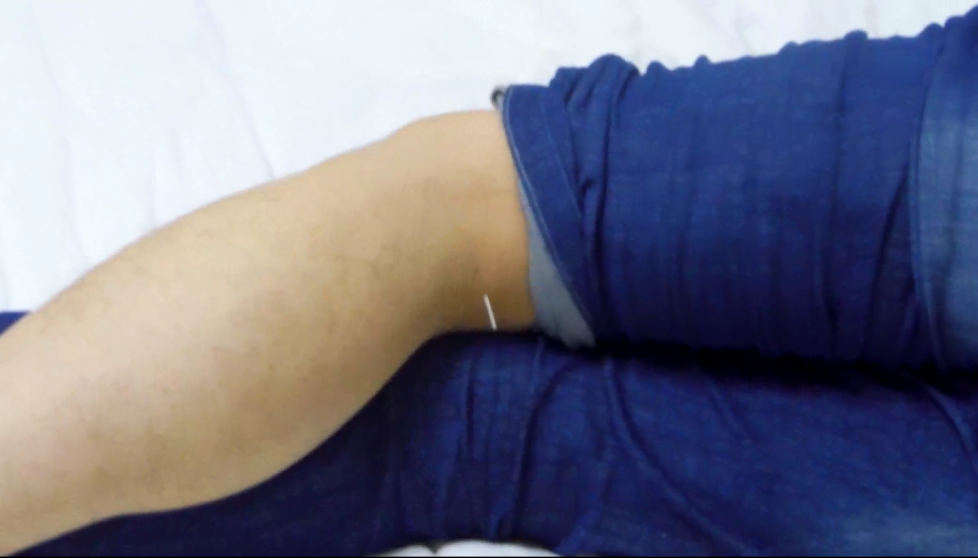 Figure 2 Measurement procedure. The data before (measurement phases a), during (b-e) and after (f) manual needle acupuncture stimulation at the acupoint Weizhong were measured and statistically analyzed.

In contrast to the results of TP, the power in the HF-band decreased significantly (P<0.01) during (b-e) and after (f) the needle acupuncture treatment (Figure 5). 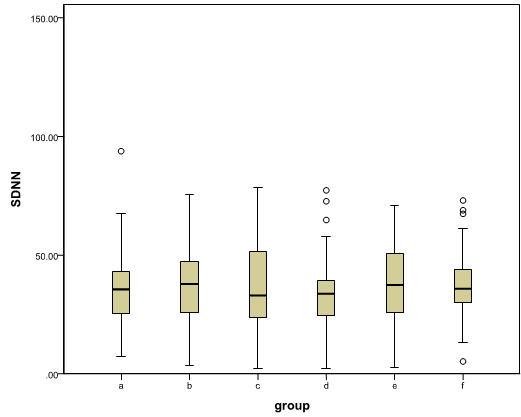 Figure 3 Box plot illustration of SDNN [ms] in 30 post-stroke patients before (a), during (b-e) and after (f) needle acupuncture. There were no significant changes (P>0.05). The ends of the boxes represent the 25th and 75th percentile, the line in the box indicates the median. The error bars mark the 10th and 90th percentile, and the dots represent the outliers. 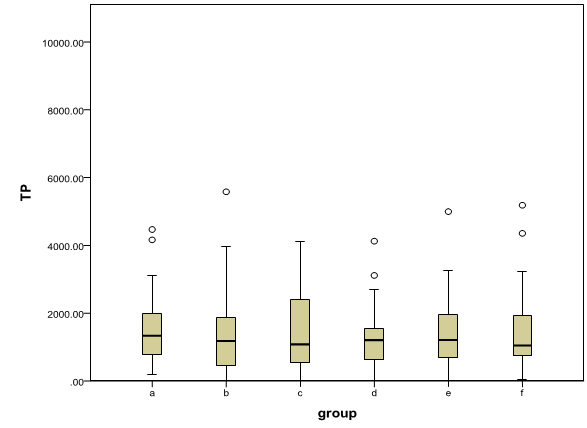 Figure 4 Box plot illustration of TP [ms²/Hz] in 30 post-stroke patients before (a), during (b-e) and after (f) needle acupuncture treatment. There were no significant changes (P>0.05). 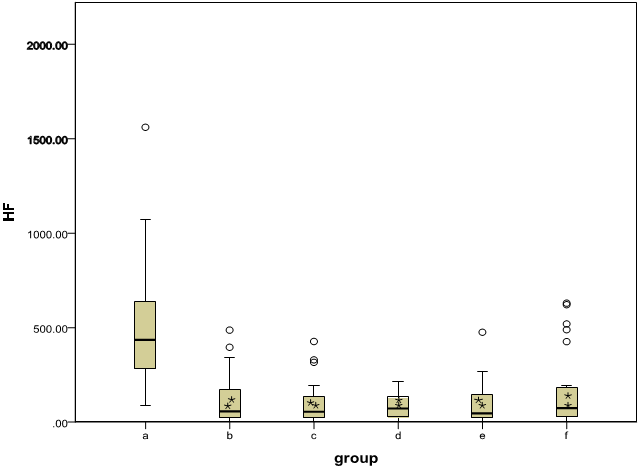 A graphical presentation of the calculation of the LF-band can be found in Figure 6. The decrease of LF was significant in phases c, e, and f. LF/HF ratio increased during (b-e) and after (f) needle acupuncture (Figure 7). 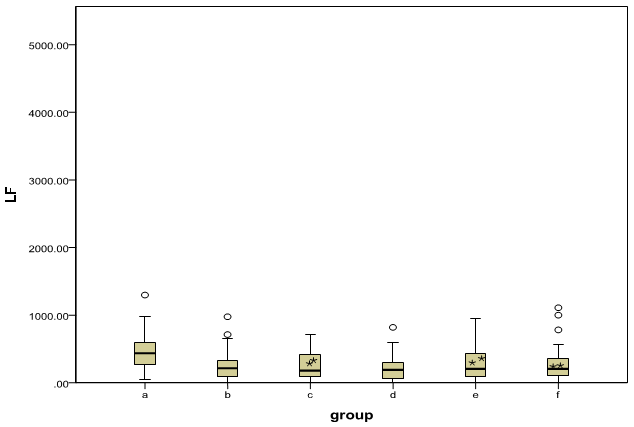 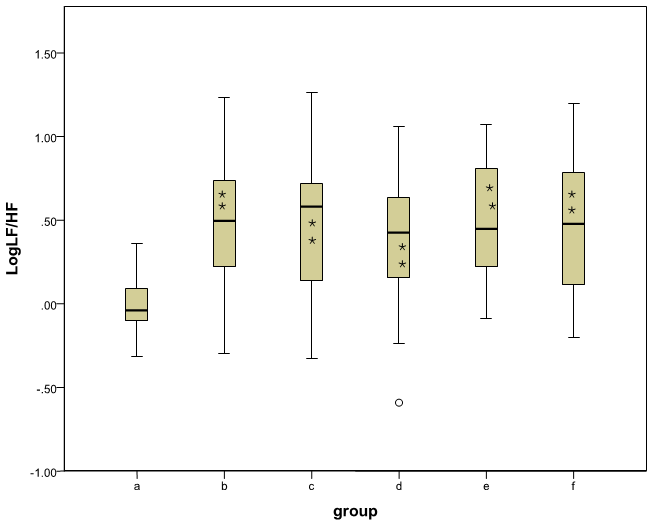 A novel concept of the so-called teleacupuncture technology was implemented in 2010 at the TCM Research Center Graz in Austria (http://litscher.info) in cooperation with Heilongjiang University of Chinese Medicine in Harbin, China over a distance of about 8,500 km [1]. The concept has been used in several studies since then, for example to investigate basic effects of acupuncture stimulation in post-stroke patients [1], in patients with insomnia [8] or depression [9], but also in patients with cervical spine syndrome [5] and tachycardia [5].

HRV can be used as a reliable indicator of the state of health. It becomes less random with the aging process and the appearance of age-related diseases. However, it could be demonstrated that in special syndromes like fatigue and stress one can counteract this process using different preventive methods like acupuncture. This has been demonstrated in recent investigations concerning patients with burn-out syndrome as performed in transcontinental teleacupuncture studies between China and Graz [4].

Within the present study, the mechanism by which acupuncture affects total HRV was not uncovered; however, acupuncture did change HRV to some extent. Additionally, we also found that the time domain index SDNN and frequency domain index TP did not change compared to those before therapy, indicating that the total HRV of the post-stroke patients was not affected by acupuncture. Intriguingly, the other frequency domain indexes, HF and LF, decreased, but the LF/HF ratio increased, so we assumed that the degree of HF drops was greater than that of LF.

It is not easy to interpret the findings as discussed above, as HRV can also be affected by diverse conditions and different medications [1,2,3,4,6]. The decrease of HF might indicate that the vagus system was restrained and the sympathetic nervous system was excited relevantly, but the whole autonomic nervous system in general was not changed. The increase in sympathetic function induced by acupuncture may, however, not be desirable in stroke patients, therefore, doctors need to be careful when using this acupoint alone for the treatment of stroke patients. In retrospect, according to TCM, if LR8 and/or KI10 had been selected to manage the TCM liver and kidney changes in the stroke patients, the LF/HF ratio may have decreased and hence sympathetic overload would have been downregulated as desired. Recent evidence reveals LR8 as a possible motor rehabilitation point in needle acupuncture [10].

The main findings of this study in 30 post-stroke patients were that acupuncture has no effect on total HRV while at the same time HF and LF changed. This Sino-Austrian collaboration also demonstrated that the exchange of medical acupuncture information across distance (teleacupuncture) is an innovative concept and could probably be useful in future transcontinental acupuncture research and education methodology concepts.

LW, ZMS and GL are also Visiting Professors at Heilongjiang University of Chinese Medicine in Harbin.

The study was supported by the Austrian Federal Ministry of Science, Research and Economy within the Sino-Austrian TCM cooperation.