Cardiovascular diseases are known to contribute to cognitive decline [1,2,3,4,5,6], but it is unclear whether the reverse is also true. It is clear that hypertension or/and diabetes are common cardiovascular conditions leading to changes in brain structure and function.

As mentioned previously, it is clear that controlling cardiovascular risk factors may slow cognitive decline [1]. However, the nature of the association between them is unclear [2,3]. Therefore, it is necessary to document the contribution of common cardiovascular factors such as hypertension, diabetes, overweight, dyslipidemia, etc. in cognitive decline. A simple algorithm can be proposed in terms of risk factors that may be conferred by the presence of these factors, either individually or in groups.

Vascular contributions to cognitive impairment and vascular dementia are characterized by the aging neurovascular unit facing and failing to cope with biological damages caused by systemic and cerebral vascular disease, proteinopathy including Alzheimer's biology, metabolic disease, or immune response, resulting in cognitive decline [8,9]. Atherosclerosis has been described as a predictor of cognitive impairment [10] and has the potential as a drug target to prevent or delay the onset and progression of dementia in older adults. Hence, early identification and treatment are recommended.

Cardiovascular diseases can affect the ability of blood vessels to deliver oxygen to various parts of the brain [9,10]. The link between cardiovascular risk factors like obesity, diabetes, hypertension and dyslipidemia, and cognitive impairment is becoming increasingly apparent. This “heart-brain” connection is important, and those with poor heart health may also have poor memory. Likewise, in patients with heart failure, poor memory can cause mental confusion.

Apart from poor memory and blurred consciousness, impaired thinking and disorientation can occur in severe cases as well. In the same manner, cardiovascular risk factors can cause cognitive impairment due to their association with small vessel disease. Small vessel disease could affect cerebral blood flow by disrupting the blood-brain barrier and increasing susceptibility to neurological injuries (Figure 1). 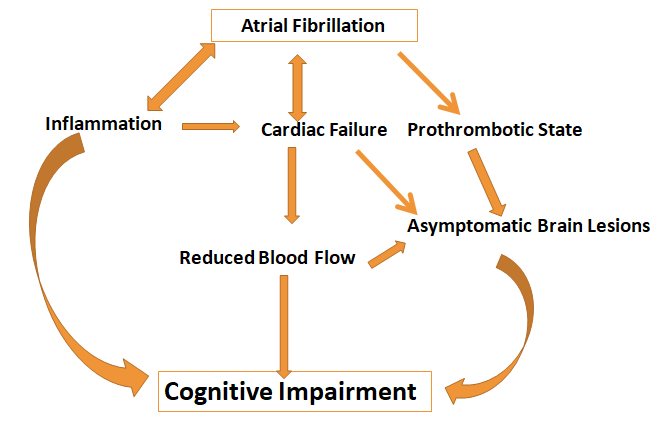 A recent large study [11] was done to evaluate the impacts of cognitive impairment and systemic vascular comorbidities on hazards of all-cause and cardiovascular mortality in a representative United States population (subjects ≥60 years of age).

The study concluded that the confluence of cognitive impairment with other systemic vascular comorbidities predicted further increased risks of mortality. Hence, more extensive assessments and management of cognitive function and systemic vascular comorbidities are warranted [11]. It is logical to assume that a combination of mild cognitive impairment with cardiovascular risk factors may increase mortality and it is suspected that hypertension plays a lead role in most such cases in this regard [12]. The relationship between cardiovascular risk factors and cognitive decline is explained in Figure 2. 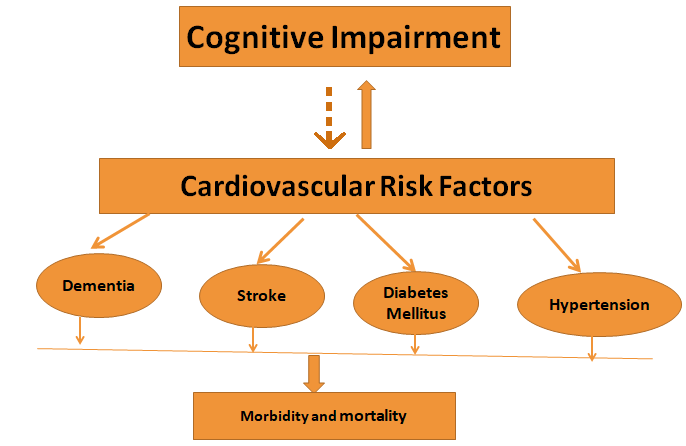 While it is clear that cardiovascular risk factors are associated in patients with cognitive impairment, what is not clear is whether addressing these risk factors will lead to a slowing down or even reversal of cognitive impairment in specific patients. In terms of association, it seems to be considered important to systematically address these risk factors. The main issue seems to be adherence to long-term treatment, and a study done by our group almost a decade ago showed poor compliance to drugs that have the potential to slow cognitive decline or prevent dementia, even among those who received the medicines for free [13]. Consider that studies have shown that incipient cognitive impairment may be common [1,14].

It is well known that cognitive impairment is common among older adults and is associated with factors known to be linked to a higher risk of cognitive decline and dementia. Identifying cognitive impairment in those with cardiovascular risk is important and several scales have been described for the same. The clock-drawing test may be valuable for identifying high-risk individuals who may then benefit from targeted non-pharmacological prevention (Mediterranean diet, exercise, cognitive training, and vascular risk factor management) [14]. Community education is an essential part of re-integrating the patient into the social setting. Reducing social isolation and increasing community engagement are important to maintain the patient's independence in their own homes [15]. A host of non-pharmacological preventive measures have been described, which can address cardiovascular risk factors contributing potentially or actually to cognitive impairment [16].

Unfortunately, at present, there is no drug for preventing dementia. However, drugs such as antihypertensives, anti-diabetes, and lipid-lowering can address risk factors and hence may be useful for dementia prevention. Though, there may be compliance-related issues regarding the same [13]. The field of pharmacological prevention of dementia is vast at present.

Cardiovascular factors have been reported in other neurodegenerative diseases as well, such as Parkinson’s disease [17,18]. These have also been associated with behavioral and psychological symptoms of dementias [19] and hippocampal atrophy, one of the earliest and most severely affected structures [19,20,21,22,23,24,25,26,27]. Perhaps hormones such as glucocorticoids synergize with vascular factors in causing vascular damage [28]. Hypersensitive/vulnerable individuals could be prone to the development of vascular components inside the brain, which may contribute to cognitive impairment [29]. Affected neural structures such as the hippocampus could undergo atrophy which could invite other pathologies such as seizures [30]. Since the pharmacological management of dementia is still limited [31], other options are being searched [32]. Cognitive impairment, regardless of the cause, predisposes individuals to abuse available medications such as benzodiazepines [33]. Hence early screening of dementias, even in primary care appears to be a feasible and acceptable option [34].

6. Prognosis Based on Cardiovascular Comorbidities in Cognitive Impairment