Amyotrophic lateral sclerosis (ALS) is reported to be probably linked to frontotemporal lobar degeneration (FTLD). Since FTLD is characterized by severe frontotemporal degeneration along with hippocampal atrophy (HA), the present study used post-mortem 7.0-tesla magnetic resonance imaging to investigate whether a certain degree of HA occurs in the ALS brains as well. The examined post-mortem brain samples comprised 9 from the ALS cases and 17 from the age-matched controls. The hippocampus samples were examined on the most representative coronal section using T2 and T2* MRI sequences, and the average degree of HA was determined for both groups. The occurrence of hippocampal micro-infarcts (HMIs) and hippocampal micro-bleeds (HMBs), as well as the frequency of cortical micro-infarcts (CoMIs) and cortical micro-bleeds (CoMBs) in the neocortex, were compared between the groups. Considerable HA was observed in the ALS group compared to the control group. The incidence of HMIs and HMBs was low and comparable in the ALS and control groups. Moreover, the frequency of CoMIs and CoMBs in the neocortex was relatively comparable in the two groups. This post-mortem observation of HA is an additional argument in favor of the link between ALS and FTLD. Furthermore, both ALS and FTLD share a low vascular risk profile.

Amyotrophic lateral sclerosis (ALS) is a neurodegenerative disease that affects motor neurons and other neuronal cells, leading to severe disability and eventually death due to ventilatory failure. ALS has a prevalence of 5 in 100,000 individuals, with an incidence of 1.7 per 100,000 individuals, reflecting a short average survival [1]. ALS is reported to be closely linked to frontotemporal lobe degeneration (FTLD) [2]. FTLD is associated with ALS in 5% to 10% cases [3,4]. Both FTLD and ALS share an increased accumulation of iron in the deep brain structures, although to a lesser degree in ALS [5].

The in vivo evaluation of the human hippocampal volume and shape using magnetic resonance imaging (MRI) has become important in the field of neuroimaging research [6].

No significant hippocampal atrophy (HA) is observed during normal aging. In FTLD, severe HA is observed [7]. In ALS patients, moderate HA is a frequent observation, along with intermittent cognitive dysfunction but without dementia [8,9].

The present study used post-mortem 7.0-tesla MRI to evaluate the degree of HA and the incidence of hippocampal micro-infarcts (HMIs) and hippocampal micro-bleeds (HMBs) occurring in the ALS patients compared to the normal age-matched controls. In addition, the incidence of cortical micro-infarcts (CoMIs) and cortical micro-bleeds (CoMBs) in the hemispheric neocortex was compared between the two groups.

The post-mortem examination involved the brain samples from 9 ALS patients and 17 age-matched controls, all without a history of any neurological disease. Informed consent was obtained either from the patients or their nearest family members for allowing an autopsy for diagnostic and scientific purposes. The brain tissue samples were acquired from the Lille Neuro-Bank of the Lille University, which is part of the “Centres des Resources Biologiques” and also acts as an institutional review board.

The neuropathological examination was conducted according to a standard procedure [9]. A whole coronal section of a cerebral hemisphere at the level of the mamillary body was used to determine the number of CoMIs and CoMBs.

Using MRI, the degree of HA was determined according to the 4-grade classification of Scheltens for Alzheimer’s disease [10,11]. In addition, the incidence of HMIs and HMBs was determined as described previously for the cortical hemispheric CoMIs and CoMBs [12].

A 7.0-tesla MRI Bruker BioSpin SA with an issuer-receiver cylinder coil having a 72-mm inner diameter (Ettlingen, Germany) was used according to the method described in previous work [13]. The brain sections, previously cleaned using formalin, were placed in a plastic box filled with salt-free water, the size of which did not allow significant movements of the tissue sample. Prior to brain sampling, three to six coronal sections of a cerebral hemisphere were submitted to SPIN ECHO T2 and T2* MRI sequences, and the hippocampus was evaluated on the most representative section.

Unvaried comparisons of the unpaired groups were performed using Fisher’s exact test for the categorical data. The non-parametric Mann-Whitney U test was used to compare the continuous variables. The significance level, two-tailed, was set at ≤0.01 for significant and ≤0.001 for highly significant. The values <0.05 and greater than >0.01 were considered marginally significant.

The age and gender distributions were relatively the same in the ALS patients and the controls [66 years in both groups], with an incidence of 50% males in the ALS group and 70% in the control group.

The post-mortem examination revealed that cerebral amyloid angiopathy, lobar hematomas, and lacunar infarcts were absent in both the groups. Only a small territorial cortical cerebellar infarct was observed in one brain sample in the control group. The incidence of CoMIs and CoMBs was low and similar in the ALS and control groups (Table 1).

Table 1 Comparison of the demographics and the associated post-mortem neuropathology (standard deviation) between the patients with amyotrophic lateral sclerosis (ALS) and the normal controls.

Table 1 Comparison of the demographics and the associated post-mortem neuropathology (standard deviation) between the patients with amyotrophic lateral sclerosis (ALS) and the normal controls.

The MRI revealed significantly higher severity of HA in the ALS brains compared to the control brains (p < 0.01), with an incidence of 1.3 (0.9) in the former and 0.3 (0.4) in the latter. No differences in the rates of HMIs and HMBs were observed between the two groups. In addition, a comparison of CoMIs and CoMBs in the neocortex of the cerebral hemisphere presented no statistical differences (Table 2).

Table 2 Comparison of the degree of hippocampal lesions (standard deviation) between the patients with amyotrophic lateral sclerosis (ALS) and the normal controls, along with the incidence of small cerebrovascular lesions in the hemispheric neocortex in magnetic resonance imaging.

Table 2 Comparison of the degree of hippocampal lesions (standard deviation) between the patients with amyotrophic lateral sclerosis (ALS) and the normal controls, along with the incidence of small cerebrovascular lesions in the hemispheric neocortex in magnetic resonance imaging. 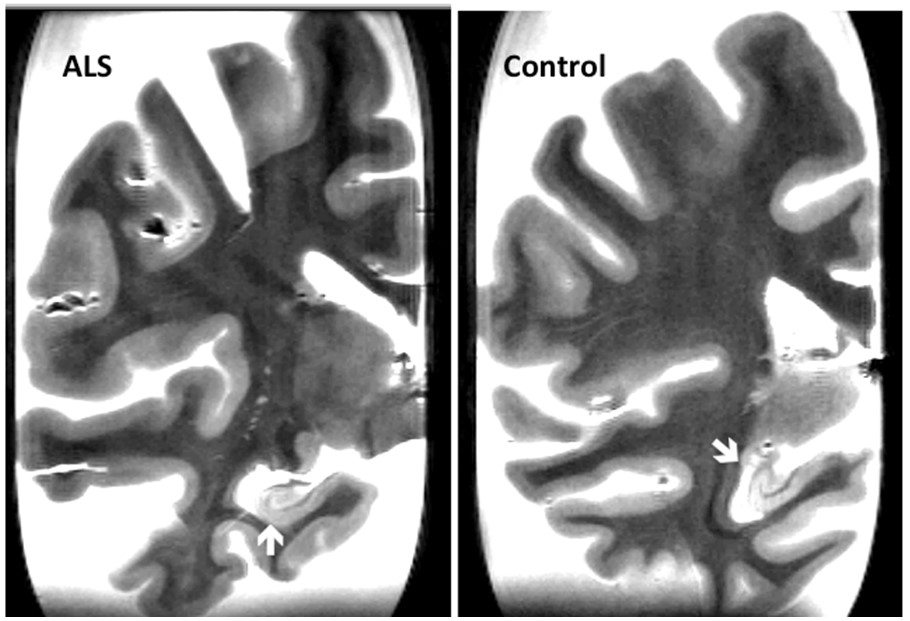 Figure 1 Comparison of a post-mortem T2 sequence magnetic resonance image of the coronal sections of a cerebral hemisphere between a brain sample with amyotrophic lateral sclerosis and a normal control one. The white arrows represent the differences in the size of the temporal horn and the hippocampus, with greater atrophy in the former.

None of the ALS patients in the present study had significant signs of mental disturbances before death. The HA in the ALS brains is reported to be as severe as that in the FTLD cases as presented in “ex vivo” MRI [7].

Recent studies have demonstrated frequent overlapping of the pathological features of a motor neuron, cognitive, and neurodegenerative diseases [18].

Although arterial hypertension is reported to occur in the early stages of ALS as a mechanism compensating for respiratory problems [19], the cerebrovascular lesions are infrequent [20,21,22]. The present study confirms the low cerebrovascular impact in ALS. This is similar to the previously-reported observations in age-matched FTLD patients [23,24].

ALS and FTLD are similar in that they are two faces of a TDP-43 proteinopathy [25]. Moreover, in both FTLD-associated ALS and the sporadic cases of ALS, a novel locus at 17q 11.2 has been observed [26,27]. However, the significance of these associations is difficult to ascertain.

The post-mortem observation of a high degree of HA in the ALS patients in the present study has to be considered an additional link of ALS with FTLD, in which further-extended severe atrophy is observed in the frontal and temporal lobes of the brain.