Comparison of Post-mortem 7.0-Tesla Magnetic Resonance Imaging of the Brains of Alzheimer Patients with and without Cerebral Amyloid Angiopathy

No previous post-mortem study has established a clear association between the presence of β-amyloid and the rates of hippocampal atrophy (HA) in patients with Alzheimer’s disease (AD). In a study, TAR DNA-binding protein 43 (TDP-43) was considered as a potential factor/marker related to increased rates of HA in AD patients [1]. Several studies have established that the rate of HA is associated with both baseline β-amyloid load and accumulation [2]. Also, several arterioles exhibiting significant alpha-smooth muscle actin loss were observed in the hippocampus and the gyrus frontalis medialis in brains of AD patients, which was related to the degree of cerebral amyloid angiopathy (CAA) [3]. Also, capillary CAA and CAA severity were found to be associated with HMIs [4].

Resultantly, divergent opinions concerning the impact of CAA on the degree of HA and the degree of associated cerebrovascular lesions in AD patients have been documented.

The present post-mortem 7.0-tesla magnetic resonance imaging (MRI) study compares the degree of HA between AD brains with associated severe CAA and those without CAA. Also, the incidences of the HMIs and HMBs between AD-CAA and AD brains are compared. Also, their incidence is compared to the frequency of cortical micro-infarcts (CoMIs) and cortical micro-bleeds (CoMBs) in the neocortex.

Thirty AD-CAA and 20 AD brains in post-mortem were investigated. A previously obtained informed consent of the patients or from the closest family member allowed an autopsy for diagnostic and scientific purposes. The brain tissue samples were acquired from the Lille Neuro-Bank of the Lille University, France that is part of the “Centre de Ressources Biologiques” and acts as an institutional review board (IRB).

The neuropathological examination was conducted according to a standard procedure [5]. The Braak criteria were employed to determine the severity of the tau pathology. Only grade V and VI stages were retained as a definitive diagnosis of AD [6]. The presence of various degrees of CAA was made according to the criteria of a consensus protocol with gradations from 0 to 3 on examining cortical samples of the frontal, temporal, parietal, and occipital cortex with β-amyloid staining [7].

A 7.0-Tesla MRI Bruker BioSpin SA (BioSpin GmbH, Ettlingen, Germany) was used with an issuer-receiver cylinder coil with an inner diameter of 72 mm. The same was used in an earlier study [8]. Three to six coronal sections of a cerebral hemisphere were submitted to SPIN ECHO T2 and T2* MRI sequences before the brain sampling for the histological examination. The hippocampus was evaluated on the most representative section. The degree of in vivo HA was determined using Scheltens criteria [9,10]. This criterion was applied to post-mortem 7.0-tesla MRI [11]. Also, the incidence of HMIs and HMBs were evaluated for cortical hemispheric CoMIs and CoMBs [12].

Uniform comparisons of unpaired groups were made with Fisher’s exact test for categorical data. The non-parametric Mann-Whitney U-test was employed to compare continuous variables. The significance level, two-tailed, was set at ≤ 0.01 for significant and ≤ 0.001 for highly significant. p-Values set at ≤ 0.05 and more than > 0.01 were considered as marginally significant.

The mean ages of the patients with AD-CAA and with AD were almost similar and were 77 (63-84) years, and 78 (65-83) years, respectively. No gender differences were observed with an incidence of 41% in the AD-CAA brains and 40% in the AD ones. A territorial infarct was noticed in five (25%) AD-CAA brains and in one (3%) patient with AD without CAA. Lobar hematomas were found in eight (40%) AD-CAA brains and were restricted to one (3%) with only the AD. 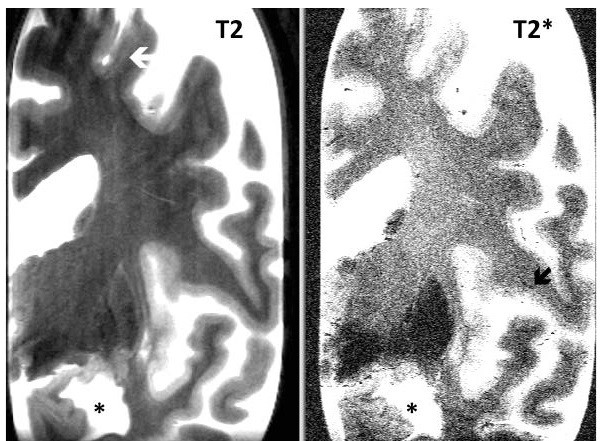 Figure 1 T2 and T2* sequences of a coronal section of a cerebral hemisphere in a patient with AD and CAA. Note in addition to the severe dilation of the temporal horn and the small hippocampus (*), a cortical micro-infarct (white arrow) on the T2 sequence and two cortical micro-bleeds (black arrow) on the T2*. 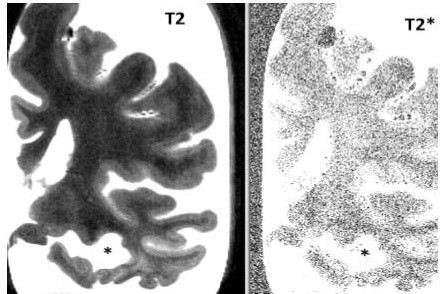 Figure 2 T2 and T2* sequences of a coronal section of a cerebral hemisphere in a patient with Alzheimer’s dementia without cerebral amyloid angiopathy. There is severe dilation of the temporal horn with a small remaining hippocampus (*).

Table 1 Comparison of the degree of hippocampal lesions in Alzheimer’s disease (AD) with and without cerebral amyloid angiopathy (CAA) and the incidence of cerebrovascular lesions in the neocortex.

Table 1 Comparison of the degree of hippocampal lesions in Alzheimer’s disease (AD) with and without cerebral amyloid angiopathy (CAA) and the incidence of cerebrovascular lesions in the neocortex.

There is a good correlation between the visual MRI quantification of medial temporal lobe atrophy and HA compared to the classical neuropathological evaluation [13].

The present study revealed no difference in the degree of HA and the frequency of HMIs and HMBs between AD-CAA brains and AD brains. This is in contrast with the high incidence of neocortical CoMIs and CoMBs in AD-CAA brains compared to “pure” AD ones (p ≤ 0.001). In the present post-mortem study, no association between β-amyloid or tau proteins and rates of HA was established in AD brains.

HA is not specific to AD with or without CAA but is also observed in frontotemporal dementia [14,15]. The higher incidence of neocortical CoMiIs and CoMiBs has already been described in some earlier studies [16,17].

Both AD-CAA and AD patients were of similarly advanced age when they died. The disease duration was not evaluated, as the early clinical onset of AD is not always clear. During the aging process, only increased severity of white matter changes and the incidence of CoMBs are observed. CoMIs showed no increase with advancing age [18].

Some previous studies have shown a higher incidence of CoMIs and CoMiBs in the neocortex of patients with AD-CAA compared to AD ones [12,19,20]. Also, in CAA patients without AD features, the incidence of these lesions is even higher than in AD-CAA ones [21].

It can be concluded that CAA has no significant influence on the degree of HA and the associated small cerebrovascular lesions in contrast to those in the hemispheric neocortex. Further studies on large populations are suggested to establish a clear link and thereby take proper diagnostic and preventive interventions to reduce morbidities from the deadly disease of CAA.