Special Issue: Osteoporosis in the Elderly

Hospitalists are at risk for vitamin D deficiency during their active years due to indoor working conditions and insufficient sunlight exposure. The impairment of bone mineral density (BMD) in this group has not been studied. A total of 50 male hospitalists aged ≥ 65 years were enrolled. Their BMD was measured at the femoral neck (FN), lumbar spine (LS), and distal radius (DR), and their medical history and risk factors were assessed through a detailed questionnaire. The FRAX® (Fracture risk assessment tool) score was calculated for each participant. The mean age was 71 ±5.3 years. They worked as hospital physicians for a mean duration of 38.8 ±6.9 years. According to the BMD measurement, 15 (30%) had osteoporosis, and 29 (58%) had osteopenia. We also analyzed bone density excluding DR, since the clinical significance of low bone density of DR alone is debatable. In this analysis, 7 doctors (14%) had osteoporosis, and 33 (66%) had osteopenia. According to AACE/ACE 2016 guidelines, 48% of the participants would require specific treatment for fracture prevention. However, using only FN and LS BMD, 40% would require treatment. Hospitalists were found to have a high prevalence of osteoporosis and osteopenia, and 40% required specific treatment according to international guidelines.

Solar ultraviolet-B irradiation is the primary source of vitamin D for most people, while dietary sources are limited. Therefore, sunlight exposure is an important factor in serum 25(OH)D levels. Exposure varies seasonally, and certain populations are not exposed to sunlight due to limited mobility or traditional dress. In recent years, many large observational studies have found evidence of vitamin D deficiency, even in young and healthy subjects. Vitamin D inadequacy was reported in approximately 36% of otherwise healthy adults, in up to 57% of general medicine inpatients in the United States and even higher in Europe [1]. Even in sunny countries such as Israel, hypovitaminosis D is prevalent. In a study published in 2009, four consecutive measurements of vitamin D, were taken in outdoor and indoor Israeli workers, once per season. Among this working population, optimal vitamin D status (≥75 nmol/L) was achieved only in summer by males working either outdoors or indoors [6].

Hospitalists are at-risk for vitamin D deficiency due to long hours of indoor work with little sun exposure [7,8].

In our study, we examined hospital physicians and pensioners, a group at risk for low vitamin D levels in their younger years, to explore the possible effects of this deficiency on bone density after several years. Osteoporosis is more common in women than in men and has therefore been studied more extensively in women. However, osteoporosis in men is an important public health problem with associated morbidity and mortality at a significant level [11].

The study was conducted in the Shaare Zedek Medical Center (SZMC), a 1000-bed teaching hospital in Jerusalem. The study group consisted of male hospital physicians aged 65 and older, who were invited to participate through email and telephone.

We excluded doctors who did not consistently work in a hospital during their careers, were currently receiving chronic steroid treatment, had malabsorption, chronic kidney disease with GFR<60, osteoarthritis, a current cancer diagnosis that involved endocrinological abnormalities or treatment that could affect bone density (including androgen-deprivation therapy), and doctors with known osteoporosis [12].

Osteopenia and osteoporosis were defined according to the World Health Organization (WHO) criteria [13].

Each participant filled in a questionnaire detailing age, the field of medical specialty, number of years having worked as a hospital doctor, and status as a Holocaust survivor, as well as his medical history regarding the exclusion criteria and FRAX® (Fracture risk assessment tool) variables.

FRAX® score was calculated for each participant using FRAX® ISRAEL data at the Sheffield University website [14]. It is a fracture risk assessment tool that has been developed by Sheffield University and estimates the 10-year probability of hip fracture and major osteoporotic fracture, in order to help health care professionals identify patients who need pharmacologic treatment. It is based on data collected from large observational studies and global population. The FRAX® score calculation includes age, gender, weight, height, clinical risk factors (previous fracture, parent hip fracture, current smoking, glucocorticoid use, rheumatoid arthritis, secondary osteoporosis, and alcohol use), and femoral neck BMD (g/cm2). The FRAX® score prediction accuracy has been validated in many independent studies [15].

The institutional review board of Shaare Zedek Medical Center provided approval for this study. Each participant signed an informed consent form.

Demographic and clinical characteristics were analyzed descriptively as numbers and percentages or means and standard deviations, as appropriate.

Out of the 110 physicians invited to participate in the study, 8 (7%) were excluded according to the exclusion criteria, and 52 (46%) declined to participate. A total of 50 physicians were included in the final statistical analysis. Their characteristics are shown in Table 1. The mean age was 71 ±5.3 years, and they worked as hospital physicians for 38.8 ±6.9 years. There were 15 (30%) who had osteoporosis at one of the sites measured, 29 (58%) had osteopenia, and 6 (12%) had normal bone density (Figure 1). We also analyzed bone density excluding DR, since the clinical significance of low bone density of DR alone is debatable (Figure 1). In this analysis, 7 doctors (14%) had osteoporosis, 33 (66%) had osteopenia, and 10 (20%) had normal bone density. 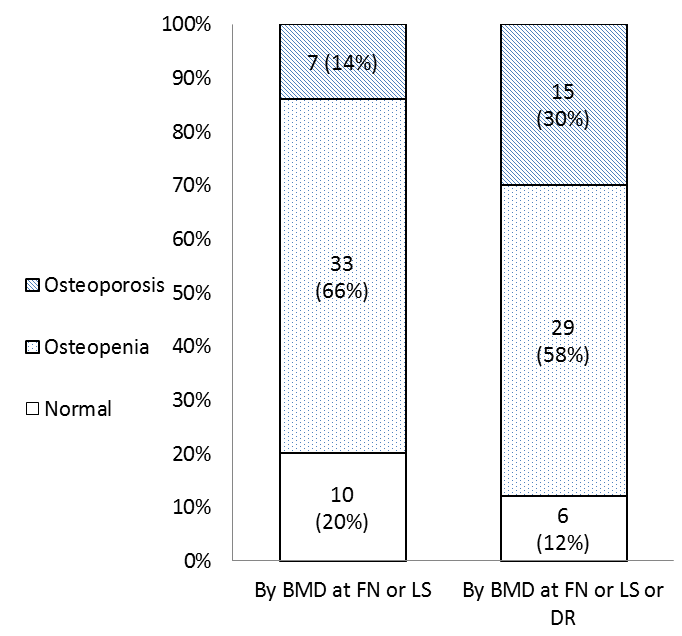 The prevalence of osteoporosis or osteopenia in hospital physicians over the age of 65, was found to be 30% and 58%, respectively. It might be explained, partly by vitamin D deficiency, which was observed in a similar population in a previous study. Another factor that can influence BMD in this population is the low level of physical activity due to heavy workload.

The use of BMD as a screening test for men is debatable. Certain expert groups recommend screening for men aged 70 years and older [16,17], or 65 and older [18], while others do not recommend screening [19,20]. Although about 30% of the hip [21] and 33% of vertebral fractures occur in males [22], most men do not undergo BMD testing, and considerably less epidemiological data are available for men than women.

There is controversy regarding distal radius BMD. It can predict fractures in men [26,27] and is rarely affected by osteoarthritis, as opposed to the spine and hip. Therefore, it may be a sensitive test for osteoporosis in men. Osteoporosis of DR alone was found in 15% of men aged 70 and older [28]. The Endocrine Society guidelines for osteoporosis in men suggested measuring DR DXA when the spine or hip BMD could not be interpreted, and for men with hyperparathyroidism or on anti-androgen therapy, but it was not recommended routinely [29]. The reason is that there is no scientific evidence showing that men with osteoporosis in the radius exclusively, respond to osteoporosis treatment. According to these guidelines, pharmacologic treatment is recommended for those had fragility fractures of the hip or vertebrae, a T score less than –2.5 in the spine, femoral neck, total hip, or a T score between –1 and –2.5 and a FRAX® ten year probability for any fracture ≥ 20% or 10-year risk of the hip fracture ≥ 3%. The AACE/ACE guidelines for the diagnosis and treatment of postmenopausal osteoporosis of 2016 [30] recommended pharmacologic treatment of patients with similar indications but included DR BMD. In the future, with more data, DR could be included in the guidelines for men. We analyzed our results with and without the DR BMD.

Osteopenia was found in over 60% of our study participants, and more than 10% diagnosed with osteoporosis. This is alarming as due to the lack of routine screening in the male population, many elderly physicians with osteopenia or osteoporosis would not be diagnosed and treated to prevent osteoporotic fractures.

There is a relative lack of epidemiological data and guidelines for osteoporosis screening in men as compared to women. The lifetime risk of osteoporotic fractures in men is estimated to be between 10% and 25%, depending on the population studied, with men experiencing it around ten years later than women. As life expectancy is increasing for men more than women, the prevalence of osteoporotic fractures in men is expected to increase, making them an interesting group to study.

Our study has several limitations. First, the assumption was made, based on previous studies, that young hospital-based doctors have a deficiency of vitamin D when compared to community-based doctors [9], and suboptimal vitamin D levels generally [7,8]. It is not known whether the specific doctors participating in this study had low vitamin D levels throughout their careers. It was decided not to measure current vitamin D levels at the time of the study, as they may be different from the earlier levels. Also, hypogonadism was one of the questions that were asked to calculate the FRAX® score, but the serum testosterone level was not examined in our study.

Another limitation of this study is the specific study population. It consisted of physicians, and some factors that affect the risk of osteoporosis viz., non-smoking, exercise, and diet, including calcium in this specific population may counteract the effects of lack of vitamin D.

The third limitation is selection bias. The study had an approximately 50% response-rate; as the healthier and more mobile subjects were included due to self-selection. This selection, however, presumptively enhanced the relevance of our results.

In our trial, we examined BMD in male hospitalists over the age of 65. It seems that hospitalists have a high prevalence of osteoporosis and osteopenia. The data from this study may be useful for the decision of screening tests in this population, as well as designing larger confirmatory studies on the prevalence of osteopenia and osteoporosis in at-risk populations.

No funding was received for this trial.