Advances in Environmental and Engineering Research

Advances in Environmental and Engineering Research (AEER) is an international peer-reviewed Open Access journal published quarterly online by LIDSEN Publishing Inc. This periodical is devoted to publishing high-quality peer-reviewed papers that describe the most significant and cutting-edge research in all areas of environmental science and engineering. Work at any scale, from molecular biology through to ecology, is welcomed.

Main research areas include (but are not limited to):

Advances in Environmental and Engineering Research publishes a range of papers (original research, review, communication, opinion, study protocol, comment, conference report, technical note, book review, etc.). We encourage authors to be succinct; however, authors should present their results in as much detail as necessary. Reviewers are expected to emphasize scientific rigor and reproducibility.

Few studies have investigated deforestation and population connections in the U.S. at large spatial extents or small scales. We examined forest cover changes over two decades, 1990-2000 and 2000-2010, in the continental U.S. at the county scale. Forest dynamics were estimated using the National Land Cover Database, a satellite-derived classification product and then linked to population data from the US. Census. At the aggregate level, high population growth seems to increase net forest loss in a non-linear manner, especially in the 2000s. Counties were also ranked based on observed forest change when compared to counties of similar population change. Looking specifically at the county level, the majority of counties with low ranking (interpreted as disproportionate high forest loss for experienced population change) were in the south east region for both 1990s and 2000s. In 2000s, the entire east coast demonstrated low rankings, along with regions in the northwest (Oregon and Washington) and central north (Minnesota, northern Wisconsin/Michigan). While our study was not designed to group socioeconomic and environmental drivers, linking forest dynamics to population changes offers important insights and supports comparisons at the national scale. Future work should consider targeted regional analysis motivated by our results and multi-factor modeling.

Deforestation, the removal of forests and subsequent conversion to other land cover/use, has considerable impact on forest ecosystem functions and services, including biodiversity [1,2,3], carbon cycle and climate [4,5], water purification [5,6], and nutrient cycling [7]. In light of the critical role of forests and increasing deforestation due to climate change and economic growth, numerous studies have focused on deforestation and forest cover change monitoring [8,9,10].

Within the U.S. forest changes have been monitored through the recent proliferation of satellite-derived forest cover datasets [11,12,13]. In addition, recent studies have shown pervasive deforestation across the conterminous U.S. [14,15,16,17]. For example, it has been found that collectively forest cover experienced the largest net decline of 97,000 km2 including lands in a temporarily disturbed state among all land cover classes between 1973 and 2000 - 25,000km2 of the forest cover loss was converted to agriculture and development [14]. In another study, using the national land cover retrofit change product 1992-2001, forest area changes between 1992 and 2001 were reported at U.S. state levels. There the deforestation rate in protected areas was lower than unprotected lands [18].

Urbanization and population growth as well as proximity to residential areas have been recognized as major factors of forest cover loss [19,20,21]. Forest cover loss in the U.S. is closely related to urban development and subsequent land use changes [17,18,22] with over 40% of urban development coming from forest cover changes in many U.S. regions [16]. Population in the U.S. is projected to increase in the first half of twenty first century, resulting in increased residential area and deforestation [22]. A significant limitation of forest cover loss studies across the U.S. was either their localized extend of their coarse spatial scale (major ecoregions). This study aims to bridge this gap through a comparative analysis of forest/population dynamics at the continental U.S. from the 1990s to the 2000s.

Our study area was the conterminous U.S. and the analysis was conducted at the county geographic level. Two decades were contrasted by comparing the 1990s with the 2000s. Forest cover data were obtained from the National Land Cover Database (NLCD) change product of 1992-2001 and the 2011 NLCD product. Both provide satellite-derived and wall-to-wall forest cover datasets covering the continental U.S. The change product of 1992-2001 has over 80% accuracy for forest cover changes [8]. In a more recent accuracy assessment including 2001 and 2011 NLCD, the user’s accuracies for estimating forest loss was near 80% for the period [23]. While this 80% accuracy is not ideal we do not expect any bias introduced in our analysis considering that forest changes are aggregated at the county level from the 30m NLCD product. To create forest binary maps, several NLCD classes were merged together into a single forest class. These classes included the deciduous forest, evergreen forest, and mixed forest; these three classes were combined as the general category of forest without considering specific forest types. We should note that we analyzed the total (net) forest change, that is the combined effect of gains and losses within a county. We generated net forest cover change by county using zonal statistics to show overall magnitude and direction of forest dynamics in the two decades. Forest changes reported in this study can be different from other data, e.g., Forest Inventory Analysis (FIA) data because the definition of forest in NLCD is based on land cover, but the definition of forest in FIA data is based mainly on forest land use.

Both forest cover and population data were aggregated at the county level. From the original 3,109 counties 23 were removed as they were newly-added, deleted, or divided during the two decades of 1990s and 2000s, reducing the number of counties to 3,086. Counties that changed names during the two decades were able to be matched based on consistent locations and boundaries. Finally, counties with forest cover less than 10% in both 1992 and 2001 were removed to prevent influence from low forest density. This produced the final count of 2,132 counties that were kept in the subsequent analysis. The final forest cover map of the 2,132 from 2001 NLCD data is shown in Figure 1. 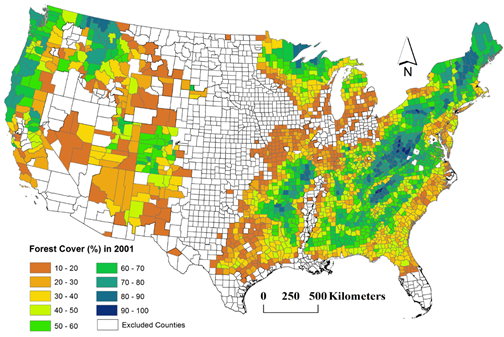 Figure 1 Forest cover from 2001. Data extracted from the NCLD change product and aggregated at the county level.

Population and forest dynamics were first examined by creating boxplots of each of the two decades (Figure 2). Each box expresses the 5% and 95% outer limits with the inner boxes depicting the 25% and 75% values and the center line showing the median value. While the population growth pressure on forest loss is evident across both decades (right side of the graph), it is considerably accelerated for the 2000s and especially for counties that have experienced high population growth. Another interesting observation comes from the number of counties belonging in every bin (presented at the top of the graph). The counties from the 1990s experiencing high population growth (right four bins) are approximately double the corresponding counties from the 2000s. This leads us to conclude that while extreme population growth was more subdued in the 2000s (and/or wider distributed at the county level), it came at a much larger expense in terms of forest encroachment. This is also backed up by U.S. Census data that indicate a population growth of approximately 33M people for the 1990s compared to 27M people for the 2000s. 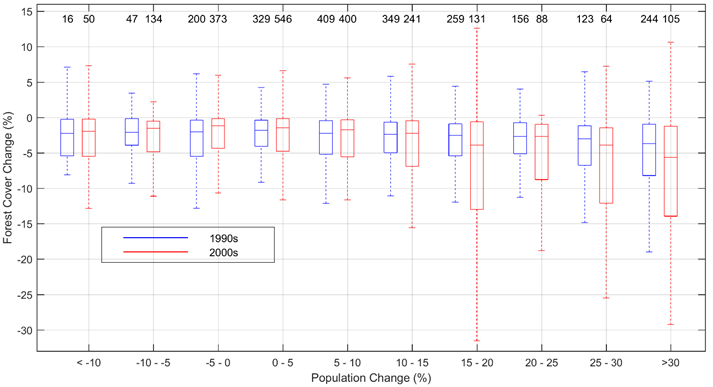 Figure 2 Relationship between population and net forest cover change in 1990s and 2000s. The numbers above boxplots represent county totals in each group of population percentage change in the two decades.

The boxplot analysis aggregates counties to offer a concise national viewpoint. The second part of our analysis was motivated by identification of county-specific behavior, thus allowing more detailed insights and management adjustments. Each bin in figure two contains the number of counties presented at the top of the figure. A relative ranking took place separately for each bin. For example, if a county from the 1990s fell into the 0%-5% population change (fourth blue bin from the left), then its ranking was contrasted to the other 408 counties belonging in the same bin and a percentile in terms of forest cover change was assigned.

Counties were assigned to one of six groups corresponding to percentiles of 10th, 25th, 50th, 75th, and 90th of distribution of net forest cover changes within their group. A lower ranking for a given county indicated a higher forest loss when contrasted with counties of similar population change. In other words, the higher ranked counties experienced less forest loss (or in a few cases higher gain) again when contrasted with the peer group of population change.

The majority of counties with low ranking were in the southeast region in both the 1990s and 2000s (Figure 3). These persistent southeast low rankings are probably driven by high harvesting [12]. Specifically, in Eastern Temperate Forests Level I ecoregion covering Southeast and Eastern coast areas, logging, agriculture, and development are the major types of gross forest losses from 1973 to 2000 [14]. The economic recovery in the second half of 1980s stimulated additional new construction, and by 2000 the southern ecoregions had become the most important commercial forest region across U.S. 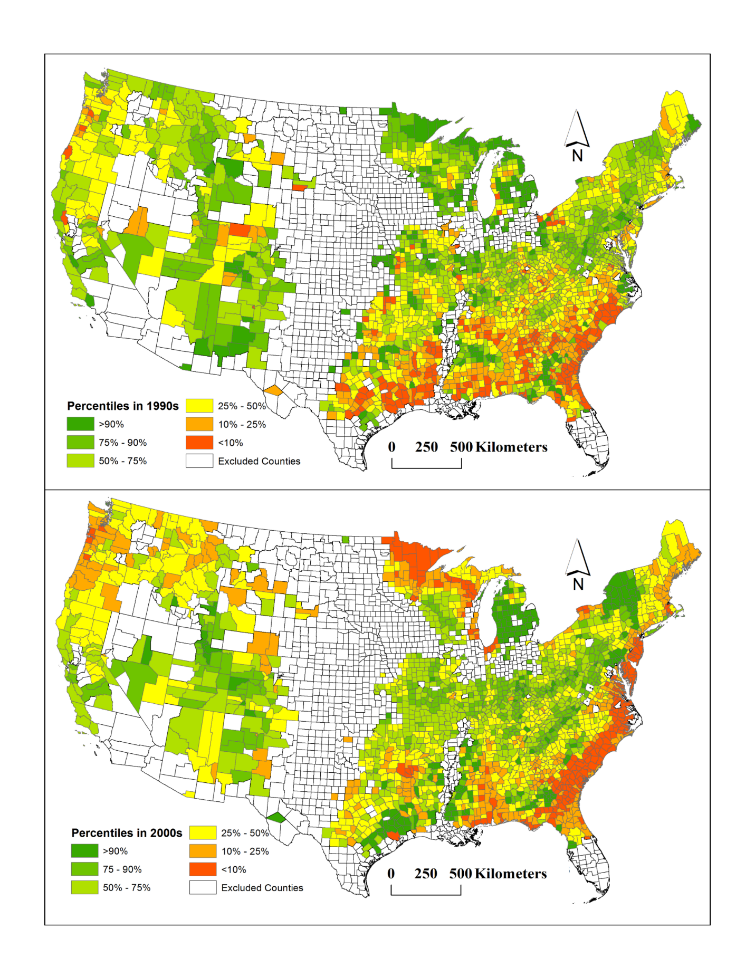 In the 2000s a shift is observed, where reduction in Texas, Louisiana and Arkansas was replaced by a further northwardly encroachment along the entire east coast. Coupled with higher rankings in northwest (Oregon and Washington) and a few other isolated spots (e.g. Buffalo and Rochester in NY) the urbanization effect is clearly identifiable. Our observations are consistent with other local studies, for example Lo and Yang [24] identified similar patterns in the Atlanta area (ranking less than 10% for Atlanta-containing Fulton County in Georgia). Higher rankings in the 2000s were also observed in Minnesota and northern Wisconsin/Michigan. While population dynamics may have played a role, the majority of this ranking is potentially caused by forest disturbances such as insects, diseases, and drought [14].

To conclude, there is a wide range of drivers behind forest dynamics, mostly operating at the local and regional scales. While our study was not designed to separate these drivers, linking forest dynamics to population changes offers important insights and supports comparisons at the national scale, a currently important but missing piece of the puzzle. Future work should concentrate on regional analysis motivated by our results and link socioeconomic and environmental factors to help tease out local drivers, for example forest harvesting, drought, disease, fire, and agricultural pressures.

This work was supported by the National Urban and Community Forestry Advisory Council, U.S. Forest Service and a SUNY ESF Graduate Assistantship.

To receive the table of contents of newly released issues of Advances in Environmental and Engineering Research, add your e-mail address in the box below, and click on subscribe.