In advanced heart failure, orthotopic heart transplantation (OHT) remains the standard for definitive treatment. Patients with heart failure and concomitant pulmonary hypertension (PH) represent a challenging subgroup, with poor outcomes following OHT. Recently, Mechanical Circulatory Support (MCS) devices have been utilized as a bridge to OHT for these patients. Patients with MCS devices who underwent OHT were evaluated at a single center. Patients were stratified into three groups, depending on baseline pulmonary vascular resistance (PVR). Groups were analyzed for outcomes. One hundred twenty three patients were identified. Of these, 39 had a PVR ≤1.6, 50 had a PVR >1.6 and ≤ 3, and 34 had a PVR >3. Demographics were generally similar. Tricuspid valve regurgitation (TR) was significantly higher among patients with worse baseline PVR (p=0.016). Survival was similar at both one and three years. On subsequent analysis, moderate/severe TR was associated with worse survival. MCS implantation as a bridge to OHT has good one and three-year outcomes among patients with increasing pre-MCS PVR. However, patients with severe PH prior to MCS have an increased rate of TR. Among these patients, moderate-severe TR after OHT has an associated risk of early death.

For patients with advanced heart failure, orthotopic heart transplantation (OHT) remains the gold standard for definitive treatment. While OHT outcomes have generally improved and the potential recipient pool broadened, patients who present with heart failure in the setting of concomitant pulmonary hypertension (PH) continue to represent a challenging subgroup. Poor outcomes in patients with PH following OHT have been noted since the early days of heart transplantation, with the resultant strain on the non-conditioned right ventricle (RV) often leading to RV failure and subsequent graft failure [1,2] These observed outcomes have led to the establishment of PH as a relative contraindication to OHT [1], though the cutoff level for limiting candidacy is variable between centers.

In an effort to address these challenges, mechanical circulatory support (MCS), including left ventricular assist device (LVAD), biventricular assist device (BiVAD), or total artificial heart (TAH) implantation has been utilized to fully unload the left ventricle (LV) and allow pulmonary pressures to improve as a bridge to transplantation. This approach has been noted to improve candidacy in this population [3,4,5]. To better establish outcomes for this challenging population, we evaluated the impact of pre-OHT pulmonary vascular resistance (PVR) in patients who underwent OHT following MCS placement at a single large-volume center.

This study was reviewed and approved by the Cedars-Sinai Medical Center Institutional review board.

All patients in this study underwent right heart catheterization (RHC) during initial workup prior to placement of MCS, as is the standard for our patients. During this procedure (and at any other subsequent RHC prior to OHT) central venous pressure (CVP), pulmonary arterial pressure (PAP), mean PAP, PVR, and cardiac output (CO)/ cardiac index (CI) were measured.

Continuous variables were reported as mean ± standard deviation, and categorical variables as a percentage. Comparison between groups was performed using the ANOVA test for continuous variables and the Pearson's Chi-Squared tests for categorical variables as a percentage, as appropriate. Survival and freedom from TR analysis were performed using the Kaplan–Meier method and compared between groups using log-rank tests. A p-values less than 0.05 was considered significant throughout. All statistical analyses were performed using SPSS software, Version 22 (IBM Corp., Armonk, NY).

Values represented as a mean ± standard deviation or percentage (%).

Survival and freedom from event analysis were performed using the Kaplan–Meier method and compared between groups using log-rank tests.

Values represented as a mean ± standard deviation or percentage (%) 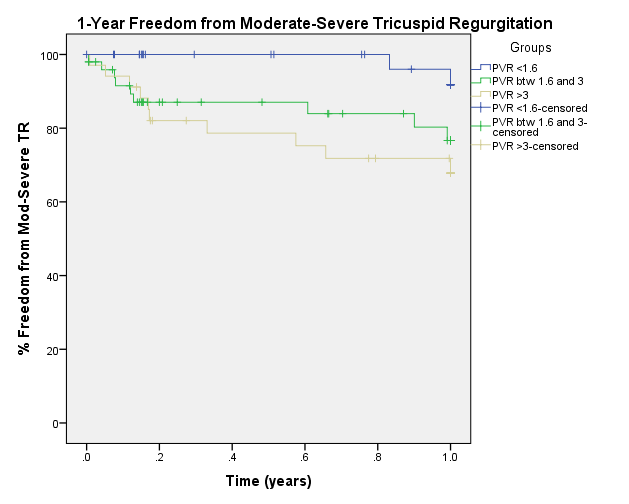 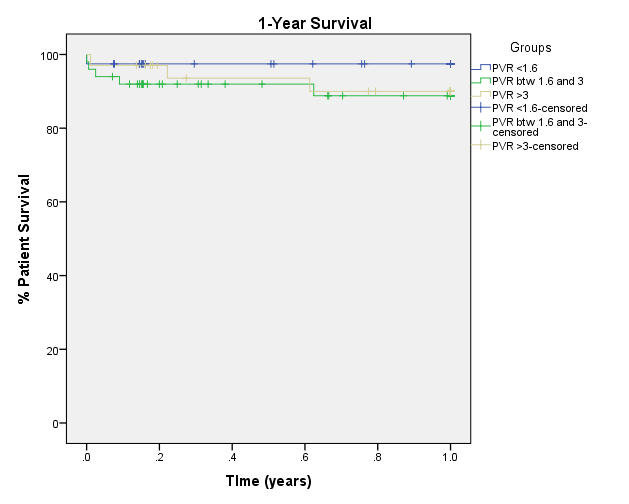 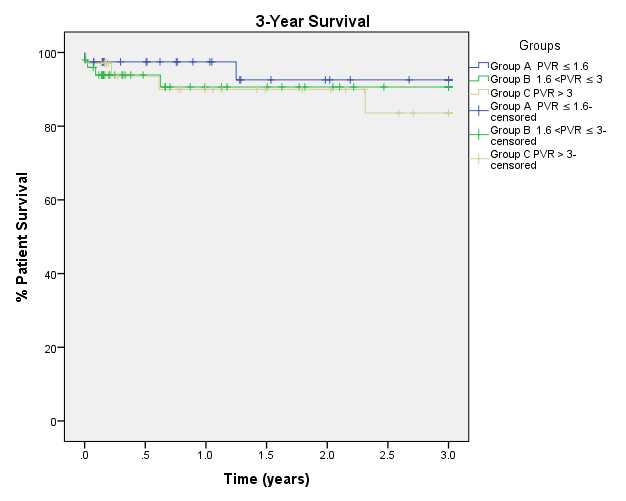 Patients with advanced heart failure and PH continue to represent a challenging population, with limited options for advanced therapies. These patients historically experience very poor outcomes when taken directly to OHT, leading to the understanding that PH is a relative contraindication for OHT [1,2]. Recently, implantation of MCS as a bridge to OHT in patients with PH has been established as a viable alternative, with a resultant decrease in PVR and restoration of candidacy in select patients [3,4,5].

It has been generally understood that the prolonged elevated left atrial pressures and subsequent increase in resistance within the pulmonary circulation is the driving factor behind PH in this population, a manifestation of remodeling within the pulmonary vascular system [6,7]. It is this remodeling that ultimately leads to the poor outcomes following OHT in this population, as explantation of the native heart and subsequent reduction in left atrial pressures does not result in meaningful change to the resistance seen by the implanted donor right heart. The unconditioned donor heart is unable to tolerate this resistance, and the subsequent right heart failure that results is typically catastrophic.

The threshold at which a transplant center may consider PH a contraindication for OHT varies depending on the degree of risk an individual center may tolerate, but generally stands at around 3 WU in most US centers [1,8]. Patients with prohibitive PH and heart failure who are not candidates for OHT have historically had poor long-term outcomes. The potential to bridge to transplantation and restore candidacy in these individuals after placement of a MCS device is an encouraging prospect, and the data included here, as well as previously reported results [4], indicate that outcomes among these patients are good. Though good outcomes following MCS for OHT patients with PH have been previously reported, the prior data focuses on patients with LVADs specifically. To our knowledge this is the first study to include BiVAD and TAH patients, and analysis of survival out to 3 years continues to be positive (Figure 3, p=0.681). These generally favorable results, including good one-year and three-year survival, indicate that where univentricular support (LVAD) is insufficient, PH patients undergoing biventricular MCS (BiVAD or TAH) as a bridge to OHT should be viewed as potentially viable candidates even with high baseline PVR. It is notable that the observed rates of biventricular support were lowest in the group with the highest PVR. The reason for this observation may be that patients who have the highest PVR simply do not survive to MCS implantation if their RV function is inadequate, and thus this group is selected for patients that are less likely to need RV support. Additionally, we suspect that given the significantly larger surgical burden of biventricular support vs. univentricular support, the surgical team may have been biased against placing biventricular support in patients with higher baseline PVR.

Though the general trend in this study was towards good outcomes among all groups (92.7% cumulative one-year survival), there were differences noted among the rates of moderate-severe TR, with a trend towards worse rates corresponding with worsening pre-VAD PVR. This increased rate of moderate-severe TR was seen despite early improvement in PVR at the 1-week cardiac catheterization for hemodynamic data among all groups post-transplantation (1.3, 1.7, and 1.7 for groups A, B, and C, respectively). Unfortunately, our data set did not include PAH therapies employed in the post-operative period and at the time of this catheterization (such as inhaled nitric oxide), long-term PAH therapies, nor did we have the data to longitudinally follow the PVR over time by hemodynamic catheterization or echo. While it appears that the PVR normalized post-OHT, we were intrigued to see that the patients with higher pre-operative PVR had higher degrees of moderate-severe TR. It is unclear, from a pathophysiology standpoint, what the underlying mechanism for increased rates of moderate-severe TR is, given this observed early improvement in PVR but it is likely associated with abnormal underlying pulmonary vascular pathology. Moreover, associated RV dysfunction in this population was not specifically examined, and as such the association of TR and RV dysfunction is also unclear. Given these limitations, we cautiously analyze this data and the conclusions we draw from it.

The long-term consequence of moderate-severe TR does not seem to be benign, as the survival difference between those with and without moderate-severe TR is significant (76.2% vs 96.1% at 1-year, p<0.001). This finding is similar to those found previously indicating a deleterious effect of moderate-severe TR on survival after OHT [9]. It should be noted that the aforementioned study by Wartig, et al., as well as another work by Herrmann, et al. [10], did not identify pre-operative PVR (immediately prior to OHT) as a risk factor for development of TR following OHT. In this study we do note a statistically-significant increase in the rate of moderate-severe TR following OHT as the pre-MCS implantation PVR rises, something that was not specifically evaluated in the prior works. This finding indicates a relationship between pre-MCS PVR and TR, and in doing so at least suggests an association between pre-MCS PVR and risk of death for these patients, though this is not statistically significant in our data, possibly due to a lack of power. It should be noted that, to the best of our knowledge, none of the TR seen was related to iatrogenic injury (during biopsy, line placement, etc.).

Though rates of moderate-severe TR were greatest in patients with the highest baseline PVR, the rate of any-treated rejection was lowest, and was statistically significant in difference between groups (Table 3). It is unclear at this time what causal relationship could be influencing this finding, especially as there did not seem to be a linear relationship between baseline PVR and rejection.

The above study is limited by its retrospective design, the short-term follow up, and by the small cohort (123 total patients). These limitations cause an increased risk for type II error. Further study in the future with larger cohorts and greater follow up is needed. Additionally, there are factors that were not captured in this dataset that may have influenced the results. For example, the use of inhalational pulmonary vasodilators or oral phosphodiesterase inhibitors post-operatively was not captured, though both did occur.

In conclusion, MCS implantation (including biventricular support systems) as a bridge to OHT has good one-year outcomes among patients with increasing pre-MCS PVR. However, patients with very elevated PVR prior to MCS implantation have an increased rate of moderate-severe TR post-transplant. Among all MCS to OHT patients, moderate-severe TR after OHT has an associated increased risk of early death. The relationship between these findings requires further study with larger cohorts and longer follow up periods.

We would like to acknowledge the Cedars-Sinai Smidt Heart Institute for continued support.

DE, and FE devised the project, oversaw and assisted with data analysis, and wrote the manuscript; RL was responsible for data analysis and data acquisition; JK, JM, DM, JC, DR, and AT aided in results interpretation and aided in manuscript creation.

No external funding sources were provided for this study. All authors attest that there are no relevant financial relationships with an external or commercial entity to disclose.