Left ventricular noncompaction cardiomyopathy (LVNC) is a rare form of heritable cardiomyopathy with wide genotypic variability, numerous phenotypic variations, and a wide spectrum of clinical disease from asymptomatic to end stage heart failure. Here, we present a case of a 2-year-old boy who presented to their pediatrician with a cough as a first clinical sign of heart failure, rapidly progressing to severe heart failure. He was found to have mixed LVNC with a restrictive phenotype, a rare phenotype of this form of cardiomyopathy. Eventually, the patient was supported via mechanical circulation with a Berlin Heart EXCOR® ventricular assist device as bridge to successful cardiac transplantation. Genetic testing for inherited cardiomyopathies found a mutation in MYH7 (Arg369Gln), known to be associated with various forms of cardiomyopathy, but has not been reported in restrictive LVNC. 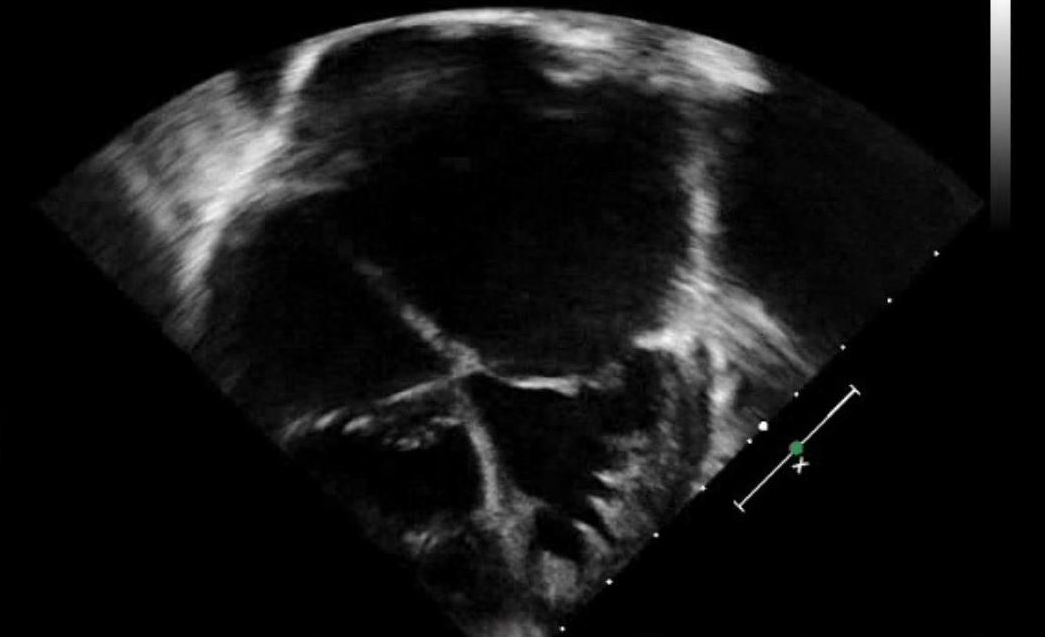 Left ventricular non-compaction (LVNC) is a form of cardiomyopathy characterized by the presence of prominent trabeculae, intertrabecular recesses, and myocardium that is characterized by two distinct layers of compacted and noncompacted myocardium [1]. It was first classified as a distinct form of cardiomyopathy in 2006 [2]. LVNC is a rare disease, with reported prevalence between 0.05 - 4 % in adults [3,4,5], although pediatric data suggests that LVNC is responsible for 9% of new cardiomyopathy diagnoses in children [6,7]. Clinical features of the disease range from asymptomatic to end stage heart failure. LVNC is also associated with a high mortality rate and is strongly associated with arrhythmias in children [8]. Restrictive LVNC is also rare, and is characterized by further findings left atrial or biatrial dilation with diastolic dysfunction with prognosis is similar to that of other forms of restrictive cardiomyopathy [9].

Here, we present a case of LVNC with restrictive physiology who was successfully bridged to cardiac transplantation via a Berlin Heart EXCOR® ventricular assist device. The patient was found to have a mutation in MYH7 (Arg369Gln). This specific mutation has not yet been reported in a patient with restrictive LVNC.

A 23-month-old male with no previous medical history presented as a transfer from an outside facility with echocardiographic concerns for restrictive cardiomyopathy (RCM). He was initially seen by his PCP one week prior to transfer for a new cough. The cough persisted and the patient developed signs of respiratory distress, and the patient was taken to an outside facility where a chest film was concerning for cardiomegaly and he was found to have a gallop on exam. This led to an echocardiogram being performed and the referring physician had concerns for RCM. He was admitted to the cardiothoracic intensive care unit (CTICU) where a repeat echocardiogram was performed, which again showed signs of restrictive cardiomyopathy with massive left atrial enlargement, prominent left ventricular trabeculations concerning for LVNC (see Figure 1), mild to moderately depressed left ventricular (LV) systolic function with normal size (LVEDD 32mm, Z-score +0.1), mild to moderate mitral regurgitation, and mildly depressed right ventricular function. Beta-natriuretic peptide (BNP) on admission was 1,733 pg/mL (institutional ULN 60 pg/mL), peaking at 3323 pg/mL.

Due to concern for RCM, he underwent hemodynamic catheterization with pulmonary vasoreactivity testing, and endomyocardial biopsy. He was found to have a right pulmonary capillary wedge pressure of 27 mmHg, mean pulmonary artery pressures of 48 mmHg, right ventricular pressures of 58/15 mmHg, a pulmonary vascular resistance of 5.64 indexed Woods units, with a pulmonary vascular bed reactive to 100% oxygen. PVRi on 100% oxygen improved to 4.24 indexed Woods units. The pre-transplant endomyocardial biopsy showed myocyte hypertrophy and was negative for inflammation, interstitial fibrosis, small vessel disease and myocyte disarray. By cardiac MRI, he met criteria for LVNC with re-demonstration of severely dilated left atrium with moderate mitral regurgitation, normal left ventricular chamber size (LVEDV 86 mL/m2) with moderately depressed function and an LV ejection fraction of 36%. There was no evidence of delayed gadolinium enhancement. At this point, a working diagnosis of LVNC with a restrictive phenotype was instituted secondary to the left-sided structures being primarily involved. 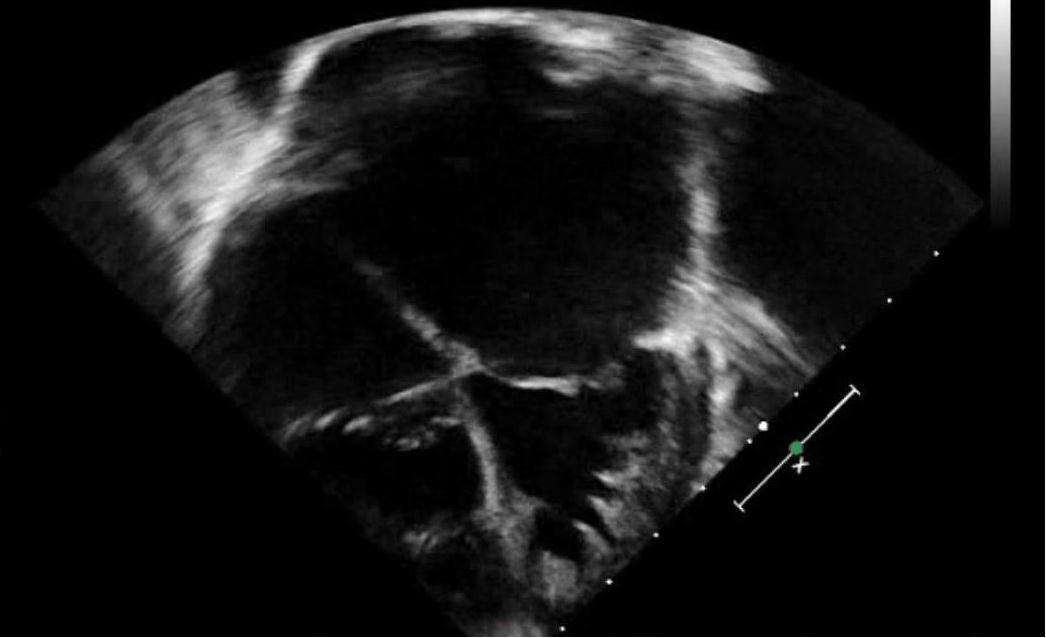 After returning from his cardiac catheterization, he was started on inotropic support with milrinone at 0.5 mcg/kg/min, diuretics were added, and he was continued on 100% FiO2 via nasal cannula. Given poor prognosis of symptomatic RCM, he was listed status 1A for cardiac transplantation on day 14 of admission. Over the next 3 months, he continued to decline, requiring escalating inotropic and respiratory support with worsen left ventricular dilation (LVEDD 39mm, Z-score +3.6). By day of admission 92, decision was made to place a Berlin Heart EXCOR left ventricular assist device (LVAD). Given his severe left atrial dilation, with smaller right atrium, it was possible to place the inflow cannula of the LVAD in the left atrium from an anterior approach, with outflow to the aorta. He was successfully bridged to an uncomplicated orthotopic heart transplantation on hospital day 130. He was subsequently discharged home on standard post-transplant outpatient medical therapy, and thrives at home.

The explanted heart had increased mass (weight = 107 grams), biatrial dilation, biventricular hypertrophy, and endocardial thickening of both atria as well as the left ventricle (see Figure 2). The wall thicknesses were: right 0.45 cm, left 0.7 cm and interventricular septum 0.7 cm. The ratio of compact to total left ventricular thickness was 0.44. The left ventricle had only rudimentary papillary muscle structures. Histologic sections of right and left ventricles showed features similar to the endomyocardial biopsy along with fibroelastic endocardial thickening, indicating some degree of biventricular disease, although with left-sided predominance. There was no myocyte disarray and the deep endocardial lined recesses were confirmed. Overall, we felt that the pathologic findings in the explanted heart excluded a primary restrictive cardiomyopathy [10]. Given that the patient met established echocardiographic and pathologic criteria [11] for LVNC, our final diagnosis was that of LVNC with restrictive phenotype. 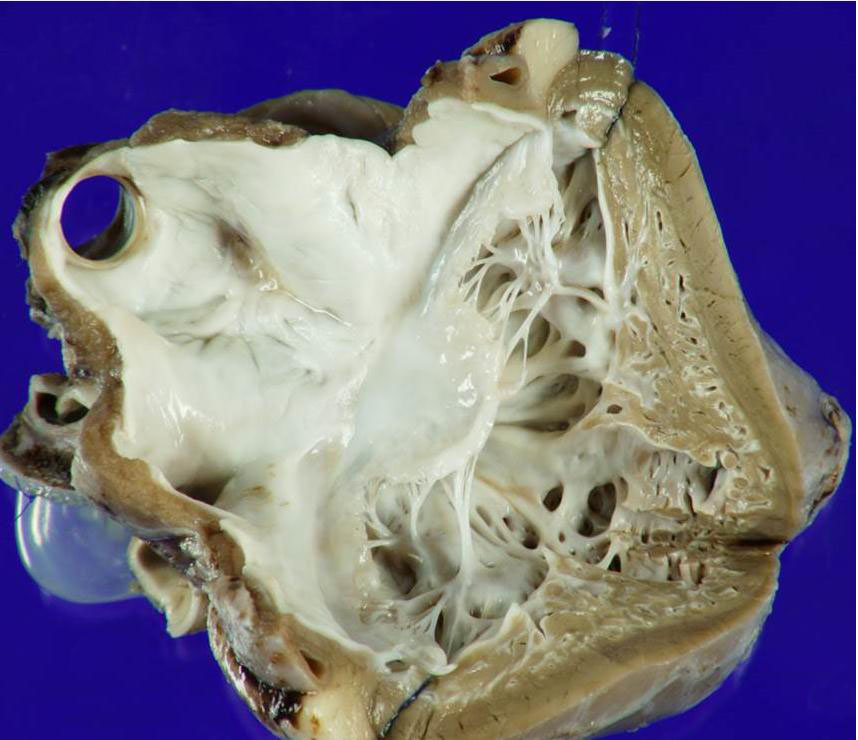 In the midst of the patient’s complicated medical course, complete cardiomyopathy workup including coronary imaging, comprehensive metabolic, and neuromuscular testing, which were all non-revelatory. Genetic testing, however, returned positive for a mutation in the MYH7 gene known to be associated with various forms of cardiomyopathy. His defect was specifically in MYH7 (Arg369gln) which is known to be associated with dilated cardiomyopathy and LVNC but has not been reported in restrictive LVNC. There were no variants of unknown significant (VUS) noted on the comprehensive Dilated Cardiomyopathy Panel (Invitae Corporation, San Francisco, CA). His parents were screened for this genetic variant and were negative. Parental screening echocardiograms were also normal.

Left ventricular noncompaction cardiomyopathy is a rare form of inherited cardiomyopathy that has become of increased interest in the field of pediatric heart failure and cardiomyopathy. Though still not entirely understood, there has been progress made in the past decade as the diagnostic criteria for the disease has been studied and the understanding of the natural history of the disease has improved. Patients with LVNC present with wide variability in symptoms including florid heart failure. In this case, the patient’s initial presentation was to their primary care physician for cough, a common presenting sign in pediatric heart failure.

In parallel with further understanding of the clinical consequences of the disease itself, rapid changes in genetic testing and interest of the heritability of cardiomyopathies has uncovered a number of genetic variants in sarcomeric proteins that lead to all forms of cardiomyopathy, LVNC included. Specific genes for which mutations are known to cause LVNC are MYH7, ACTC, TNNT2, MYBPC3, TMP1, and TNNI3 [12]. LVNC also has phenotypic variability, commonly associated with other forms of cardiomyopathy, and, rarely, restrictive cardiomyopathy. Jefferies and colleagues reported in 2015 that the specific phenotype of LVNC is predictive of survival, though RCM phenotype was too rare (3 cases) to include in the analysis [9].

In this case, our patient was found to have a variant in MYH7 (Arg369Gln). Myosin heavy chain 7 (MYH7) encodes a sarcomeric protein, and mutations within this gene are associated with various forms of cardiomyopathy. Mutations within MYH7, including this mutation, have been reported to be associated with LVNC in patients with and without congenital heart disease [12], but not with a restrictive phenotype [13,14]. The resultant significant cardiomyopathy progressed to severe clinical heart failure. VAD therapy with typical inflow cannulation of the ventricle can be made more difficult in smaller RCM ventricles, with potential for inflow obstruction from non-compacted myocardium in LVNC. In this case, however, the greater left-sided involvement allowed for an anterior approach of the left atrium for the inflow cannula, and this strategy allowed us to bridge to transplant successfully.

LVNC is a rare form of heritable cardiomyopathy with wide genotypic variability, numerous phenotypic variations, and a wide spectrum of clinical disease from asymptomatic to end stage heart failure. In this case, we report a genetic variation (MYH7 (Arg369Gln)) associated with LVNC, but not previously linked to the specific phenotype of restrictive LVNC. The clinical presentation of the patient was eventually that of severe heart failure. The patient was able to survive after being supported with a ventricular assist device via atrial cannulation that led to successful cardiac transplantation.

The authors would like to thank the patient’s family for supporting us in sharing this case report. We would also like to thank the Nationwide Children’s Hospital for their support. The authors have no financial relationships relevant to this article or conflicts of interest to disclose. No funding was necessary to complete this manuscript.

Dr. Morrison and Dr. Nandi conceptualized the case report, drafted the initial manuscript, and reviewed and revised the manuscript.