1. Alberta Diabetes Institute and the Departments of Pharmacology, Faculty of Medicine and Dentistry, University of Alberta, Edmonton, Alberta, Canada

2. Alberta Diabetes Institute and the Departments of Physiology, Faculty of Medicine and Dentistry, University of Alberta, Edmonton, Alberta, Canada

Background: One of the goals of clinical islet transplantation is to achieve a single-donor transplant that is dependent on obtaining enough quality β cell mass from one donor pancreas. Human islets are routinely cultured prior to transplantation, and pro-survival factors such as GLP-1 analogues have been reported to maintain β cell mass and survival. Interestingly, human islets may secrete GLP-1 and they also express the enzyme DPP4 that proteolytically cleaves GLP-1 into an inactive form. The aim of this study is to investigate GLP-1 secretion from human islets and to test if the DPP4 inhibitor sitagliptin may increase levels of active GLP-1 to increase islet survival in culture.

Conclusions: Human islets have a local paracrine source of the prosurvival peptide, active GLP-1. Although low levels of active GLP-1 are associated with greater β cell function, these levels may be increased with the DPP4 inhibitor sitagliptin. The increase in active GLP-1 levels may confer protection from islet cell death and pre-treatment of islets with DPP4 inhibitors prior to transplantation has the potential to improve post-transplant islet survival.

Clinical islet transplantation (CIT) is a successful treatment for T1D patients with hypoglycemic unawareness and severe hypoglycemic events who have failed to obtain adequate glycemic control with insulin therapy alone [1]. Recent studies show that CIT can restore hypoglycemia awareness, eliminate or reduce severe hypoglycemic events, and improve glycemic control [2,3]. Furthermore, insulin independence rates at 5 years after transplantation have improved significantly since the first Edmonton Protocol and are now nearly 50% [4]. Improvements in islet isolation and culture, along with improved donor selection and immunosuppressive agents, have propelled human islet transplantation from an experimental procedure to an effective clinical treatment.

One of the goals of CIT is to obtain a single-donor transplant that is dependent on obtaining enough quality β cell mass from one pancreas [5]. Islet preparations are routinely cultured for 24-72 hours to allow for quality control and initiation of inductive immunosuppressive treatment of the recipient [1]. Although this culture period can further purify the islet preparation, it may also result in a loss of β cell mass, falling below the minimum 5000 IEQ per kg of recipient body mass required for transplant [6]. During this pre-transplant culture period there is an opportunity to retain β cell mass and precondition the islets for improved survival in the acute post-transplant setting. Indeed, the loss of β cell mass in the hepatic portal vein transplant site in the first few days post-transplant is estimated at >50% [7], suggesting that increasing β cell survival in culture may reduce overall islet requirements. Therefore, therapies already in clinical use that maintain β cell mass and improve β cell survival would further the goal of a single-donor transplant.

Glucagon-like peptide-1 (GLP-1) receptor agonists and dipeptidyl peptidase-4 (DPP4) inhibitors, medications for the treatment of T2D, have shown promise in islet transplantation. Liraglutide, a long-acting GLP-1 receptor agonist, improved islet engraftment in mice and was shown to increase survival of human islets in culture [8,9]. DPP4 inhibitors increase circulating levels of active GLP-1 and have been shown to increase β cell mass in animals. In a clinical pilot study, the DPP4 inhibitor sitagliptin was combined with pantoprazole to successfully restore insulin independence from failing grafts, although insulin independence was lost after treatment was stopped [10]. However, in a randomized, placebo controlled study using sitagliptin in islet autotransplantation after total pancreatectomy, sitagliptin was well tolerated, although there was no metabolic benefit from treatment [11].

Human islets secrete bioactive GLP-1 from α cells and thus have a paracrine source of GLP-1 localized to β cells [12]. Furthermore, DPP4 is also expressed in the α cells of human islets allowing for the use of DPP4 inhibitors to increase active GLP-1 levels within islets. DPP4 inhibitors have been reported to increase active GLP-1 levels and insulin secretion in human islet cultures [13,14], with one group reporting increased β cell survival [15]. However, little is known about intra-islet GLP-1 secretion and the role it may have in maintaining β cell mass, particularly in the context of DPP4 inhibition.

De-identified human primary islets isolated from deceased donors were obtained from the Alberta Diabetes Institute IsletCore and the Clinical Islet Laboratory, University of Alberta, in accordance with institutional human ethics guidelines. If the islet preparation was <90% pure, islets were handpicked to obtain >90% purity. Islets were cultured in DMEM (5.5 mM glucose) supplemented with 10% FBS and 1% penicillin/streptomycin for static incubations and islet culture experiments. Diagnosis of type 2 diabetes was determined from medical records and a HbA1c > 6.5%.

Using a 96 well plate with optical bottoms, 40 human islets were cultured in 200uL of Ham’s F10 (6.1 mM glucose) supplemented with 10% FBS and 1% penicillin/streptomycin for 48 hours with or without 200 nM sitagliptin at 37°C. A parallel group was coincubated with 50 ng/ml IL-1β. Media samples were taken after 48 hours of culture, spiked with 100 uM sitagliptin to prevent further degradation by DPP4, and frozen at −20°C for active GLP-1 analysis. The islets were imaged with an AMG EVOS fluorescent microscope, 10X objective, using the brightfield channel. Images were analyzed using ImageJ and the total area of the islets was measured and calculated using the polygon tool. For the serum-free 8 hour experiment, 50 islets were cultured in 500uL of Ham’s F10 supplemented with 10 mM glucose, 10 mM nicotinamide, 2 mM L-glutamine, 1.6 mM calcium chloride, 0.5% BSA, 50 uM IBMX, and 0.5% penicillin/streptomycin.

Using a 96 well plate with optical bottoms, 40 islets were cultured at 37°C in 200uL of Ham’s F10 (6.1 mM glucose) supplemented with 10% FBS and 1% penicillin/streptomycin. The remaining wells of the 96 well plate were filled with PBS to reduce evaporation. The islets were treated with or without 200 nM sitagliptin for 48 hours. The time in culture was used to challenge the islets and promote cell death. After 48 hours, media samples were taken and Sytox Green (Molecular Probes, Eugene, OR) was added to each well (final concentration 100 nM). The islets were imaged with an AMG EVOS fluorescent microscope, 10X objective, using the brightfield and green channels. Images were analyzed using ImageJ where the dead cells (green spots) were counted using a threshold technique and the area of the islets was quantified. Dead cell density was calculated by dividing the dead cells by the area of the islets.

For assessment of in vitro function of islets, static glucose stimulation was performed sequentially on the same sample. After overnight culture, triplicate islet samples were incubated with 2.8 mM glucose and then with 28.0 mM glucose in Connaught Medical Research Laboratory 1066 medium. Stimulation index was calculated as the ratio of stimulated to basal insulin release during 60 minute incubation intervals. Islet preparations were assessed for cell viability using membrane exclusion dyes. A sample of islet preparations was stained using SYTO Green (SYTO-13; Molecular Probes, Eugene, OR) and ethidium bromide. Following one minute incubation at room temperature, preparations were analyzed under fluorescent microscopy for proportion of live and dead cells, which then was expressed as a percentage. Culture time is the time islets were in the CO2 incubator prior to release. Cold ischemia time was defined as time from cross-clamp of aorta to initiation of islet isolation. DNA content was measured using the Quant-iT DNA quantification assay.

Approval for the use of isolated human islets for research has been obtained each year for the duration of the study, and most recently approved on Nov. 22, 2018 from the Health Research Ethics Board (HREB) - Biomedical Panel under the Study ID: Pro00014814. The HREB - Biomedical Panel carries out its functions in a manner consistent with Good Clinical Practices and the Canadian General Standards Board (CAN/CGSB-101.1-2013). De-identified human primary islets isolated from deceased donors were obtained from the Alberta Diabetes Institute IsletCore and the Clinical Islet Laboratory, University of Alberta, in accordance with institutional human ethics guidelines. 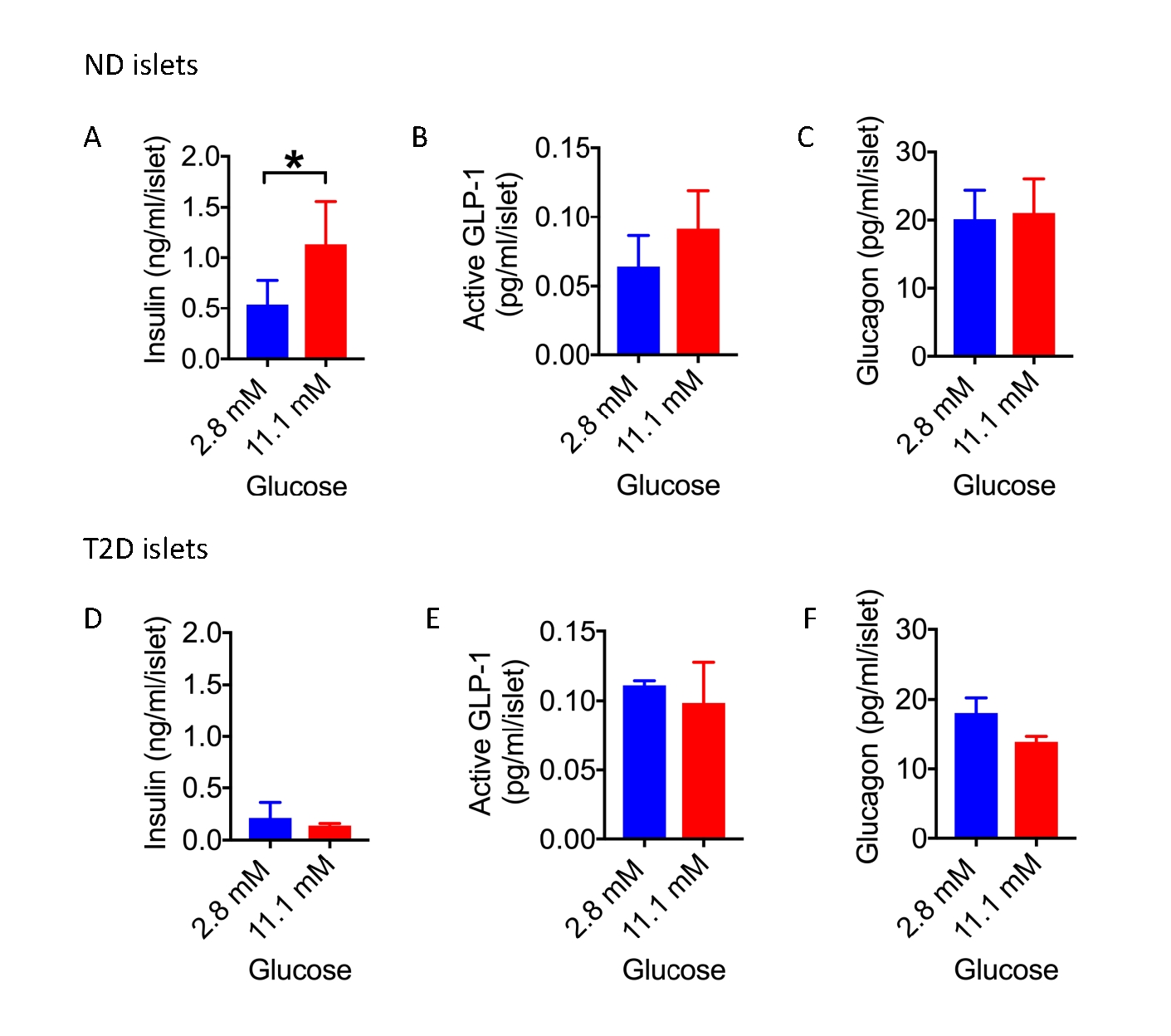 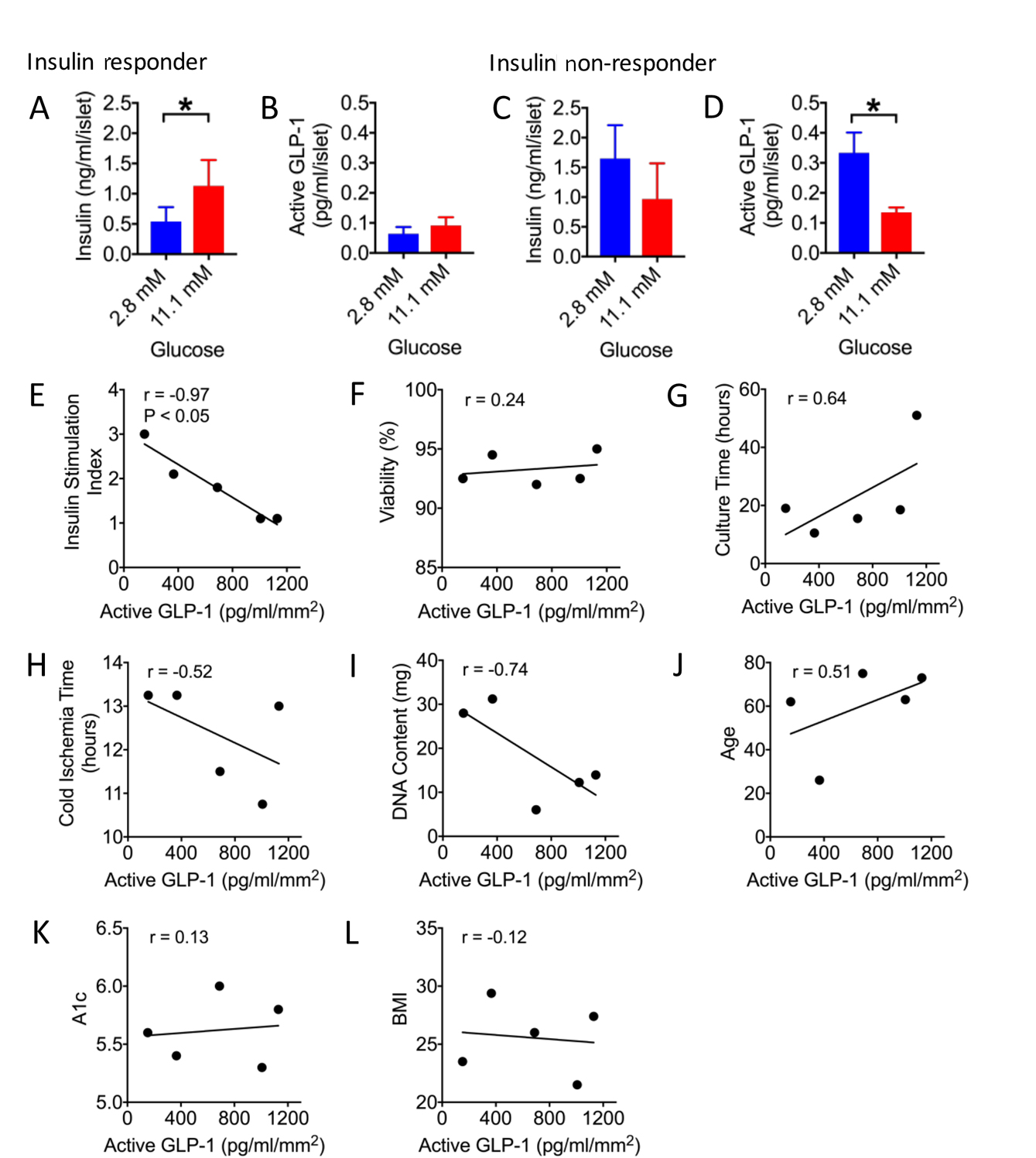 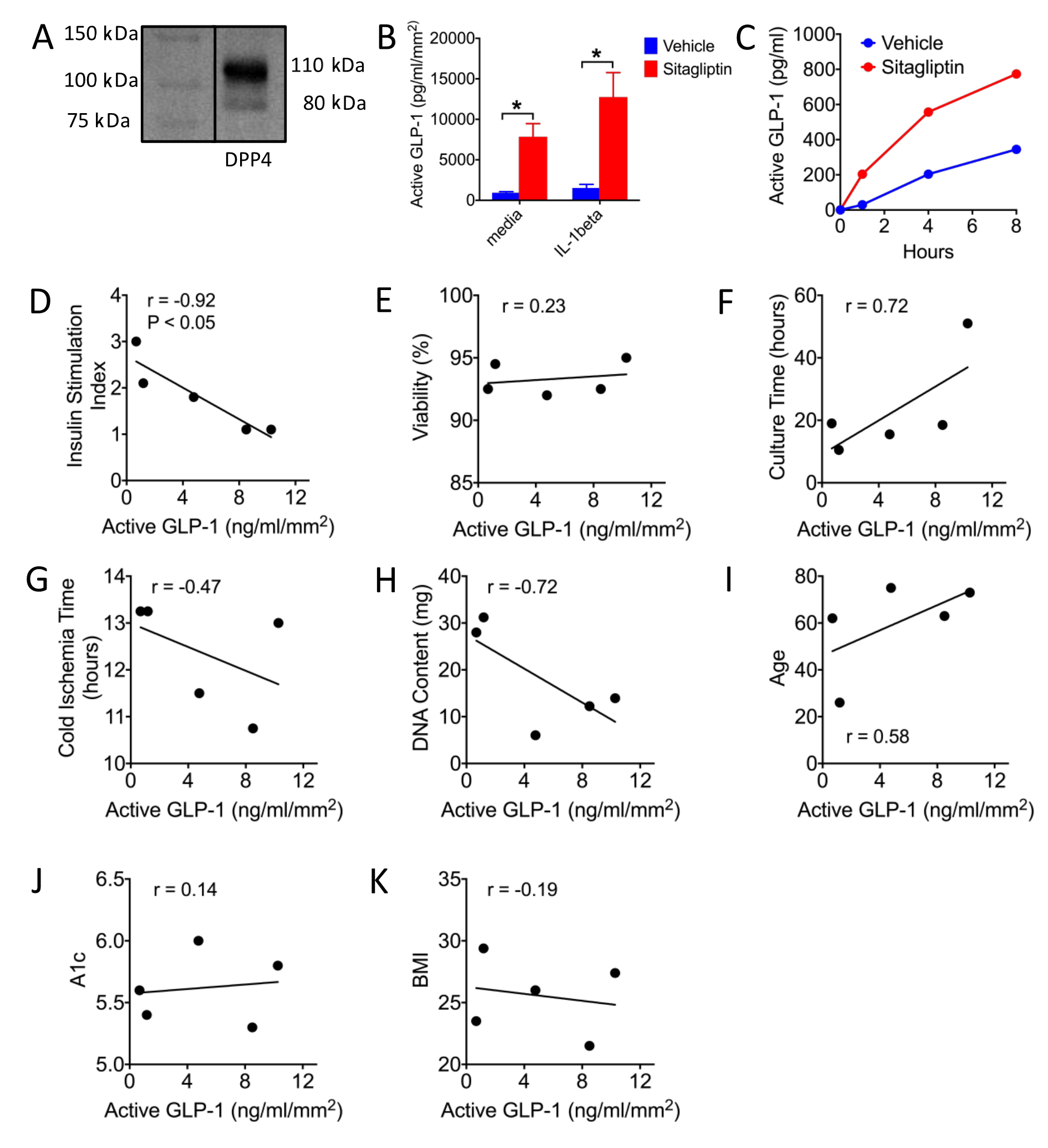 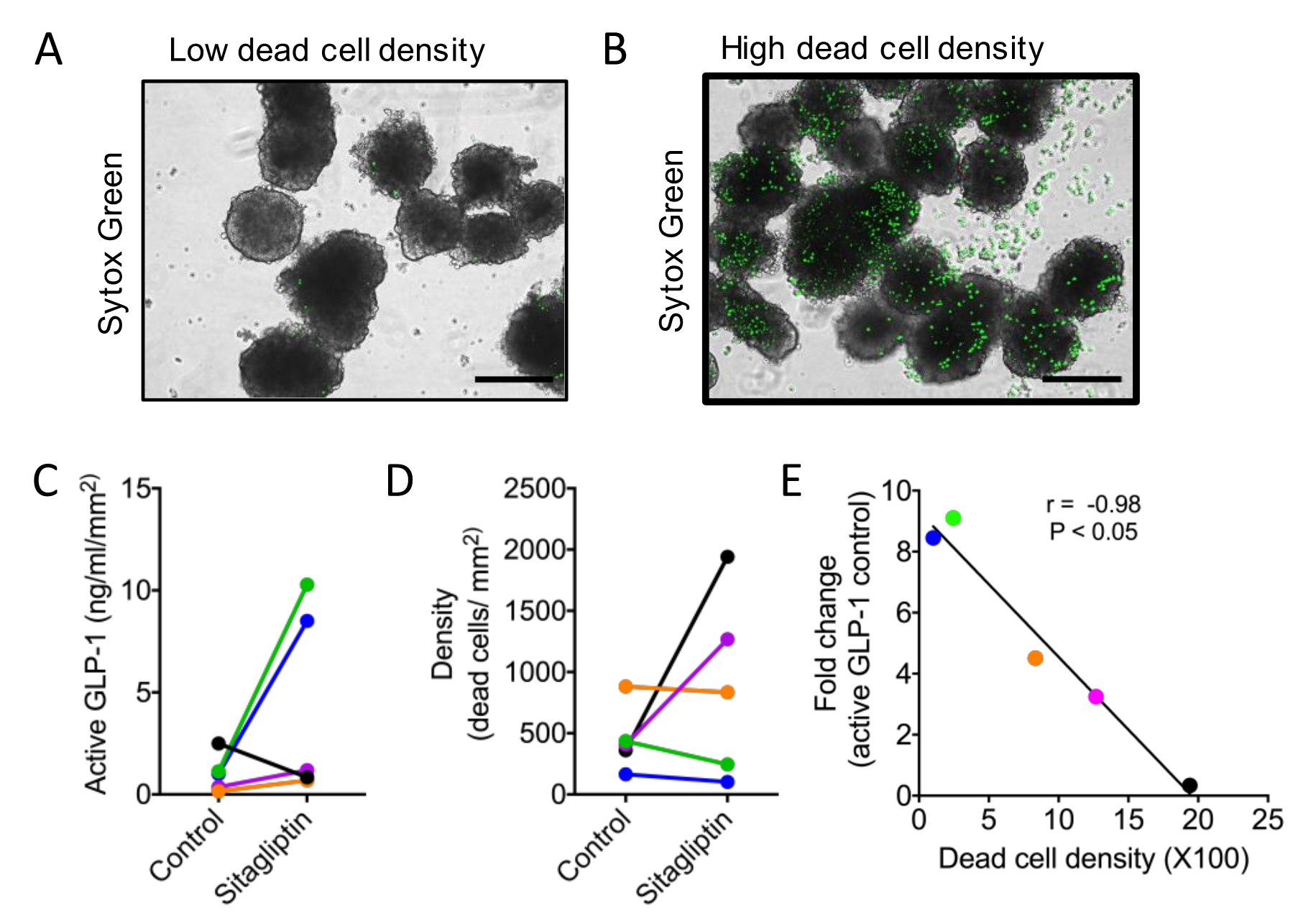 It is possible that other DPP4 substrates, such as the chemokine SDF-1, may be responsible for the correlation between sitagliptin treatment and increased cell survival in our data. SDF-1 signaling has been show to protect and preserve function β cell mass [24]. When β cells are injured, a regenerative process is induced where SDF-1 is expressed and secreted from β cells. Indeed, the process of islet isolation may be enough to induce SDF-1 expression. The model proposed by Liu et al. for islet survival describes SDF-1 acting at β cell CXCR4 receptors to increase survival and at α cell CXCR4 receptors to induce GLP-1 secretion by PC1/3 expression [20]. GLP-1 would then activate the GLP-1 receptor on β cells to increase survival. Interestingly, both GLP-1 and SDF-1 are physiological substrates of DPP4 and inhibiting DPP4 may increase levels of both hormones for a greater impact on islet cell survival.

Sitagliptin may not only benefit islet culture, but could improve engraftment and islet cell survival in the hepatic portal vein. DPP4 has recently been identified as a hepatokine indicating that DPP4 is expressed and active in the liver [25,26]. This raises the possibility that islet-derived and circulating GLP-1 may be degraded within the hepatic portal vein, thus reducing levels local to the islet graft. SDF-1 levels may also be lowered, thus curtailing an adaptive mechanism for β cell survival. Therefore, inhibition of hepatic and islet DPP4 with sitagliptin may promote survival of the islet graft.

In summary, we show that human islets secrete GLP-1 and thus have a local paracrine source of this prosurvival hormone. Although a reduction in glucose-stimulated insulin secretion may be associated with increased GLP-1 secretion, the prosurvival properties of GLP-1 may be harnessed to increase islet survival during pre-transplant culture. We show that sitagliptin treatment of human islets inhibits islet DPP4 and increases active levels of GLP-1. The increase in active GLP-1 may confer protection from cell death and has the potential to improve islet viability prior to islet transplantation, leading to improved islet survival post-transplant.

This research was supported by grants from the Canadian Institutes of Health Research (CIHR, to P.E.L.) and the Dr. Rod Eidem Diabetes Research Fund (P.E.L.). Trainee funding was provided by the Alberta Diabetes Foundation (S.A.C., M.H., J.J.), and the Faculty of Medicine and Dentistry (S.A.C.).