Paragangliomas are rare tumors that may present with cranial neuropathies when located along the skull base. Supratentorial paragangliomas are less likely to secrete catecholamines but should be worked up, nonetheless. We highlight a case of a female in her fourth decade found to have a petroclival lesion following initial presentation that included one month of tooth pain, dysphagia, diplopia, hoarseness and right hemifacial hypoesthesia. Magnetic resonance imaging of the brain demonstrated a T2 hyperintense lesion favored to be a petroclival meningioma. Pre-operative angiography demonstrated a hypervascular tumor. She underwent a combined presigmoid craniotomy with posterior petrosectomy performed by both neurosurgery and neuro-otology. Pathology demonstrated paraganglioma. She had small volume residual tumor and is planned for continued outpatient radiotherapy. Paragangliomas should be on the differential for skull base lesions. Management paradigm involves multidisciplinary care and a combination of surgical resection and post-operative radiation. In this paper, we discuss underlying pathophysiology as well as appropriate workup and management.

Paragangliomas of the head and neck arise from chromaffin cells of parasympathetic paraganglia and often have variable catecholamine release [1]. These tumors can mimic other lesions such as meningiomas and solitary fibrous tumors. Most common locations for head and neck paragangliomas include the carotid body and the jugular foramen, Work up starts with imaging, which typically consists of MRI followed by angiography if high vascularity is suspected [2]. New onset cranial neuropathy is a common clinical presentation of skull base paragangliomas owing to local mass effect [3]. Once suspected, catecholamine release assays should be performed to determine the efficacy of pre-operative medical treatment with agents such as phenoxybenzamine, propranolol, or metyrosine. Current practice consists of diagnostic angiography with or without embolization, surgical resection of lesion, and post-operative radiation if gross total resection was not achieved [4]. Depending on location of lesion, the surgical resection is often a combined approach with otolaryngology and neurosurgery [5]. For glomus jugulare tumors, radiation therapy or radiosurgery in the most common approach. The differential diagnosis for a petroclival tumor includes meningioma, schwannoma of nearby cranial nerves, chondroma, chondrosarcoma, chordoma, and others. These lesions can present with subtle onset of symptoms, including cranial neuropathies and signs/symptoms of elevated intracranial pressure [6]. In this paper, we present a unique case of a petroclival paraganglioma. We discussed the intricacies of workup and management. In the discussion, we highlight the important teaching points regarding pathology, genetic contribution, and long-term outcomes with appropriate follow up. 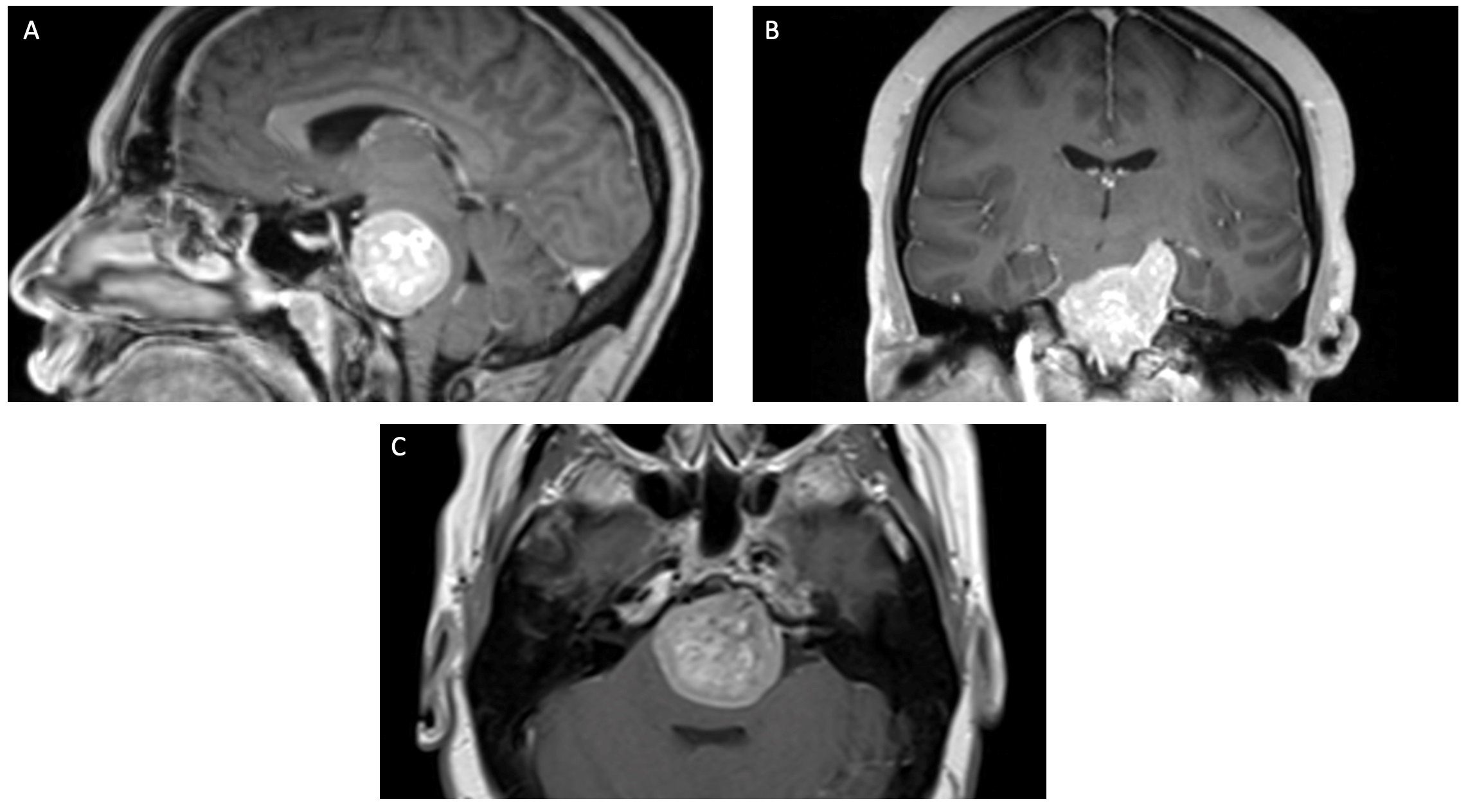 Given the patient’s progressive symptoms and the lesion’s compression of nearby neurovascular anatomy, the patient was recommended for surgical resection. Preoperatively, the patient underwent preoperative angiography to better delineate the tumors relationship to the posterior circulation (Figure 2). A hypervascular lesion with brisk vascular supply of the lesion via petrous cavernous branches of the bilateral internal carotid arteries, right and left external carotids, and posterior circulation, with evidence of tumoral shunting. The microvasculature was difficult to access limiting preoperative embolization. She underwent preoperative placement of an external ventricular drain with plan for rapid wean post surgery. The following day, she underwent a combined left extended retrosigmoid craniotomy, temporal craniotomy, and posterior petrosectomy with neurosurgery and neuro-otology with stereotaxy, SSEP, MEP, and monitoring of cranial nerves V, VII, VIII, IX and X This approach was chosen to minimize retraction of normal cerebellum in this young patient, as well as to provide access to both the supratentorial and infratentorial compartments (Figure 3). 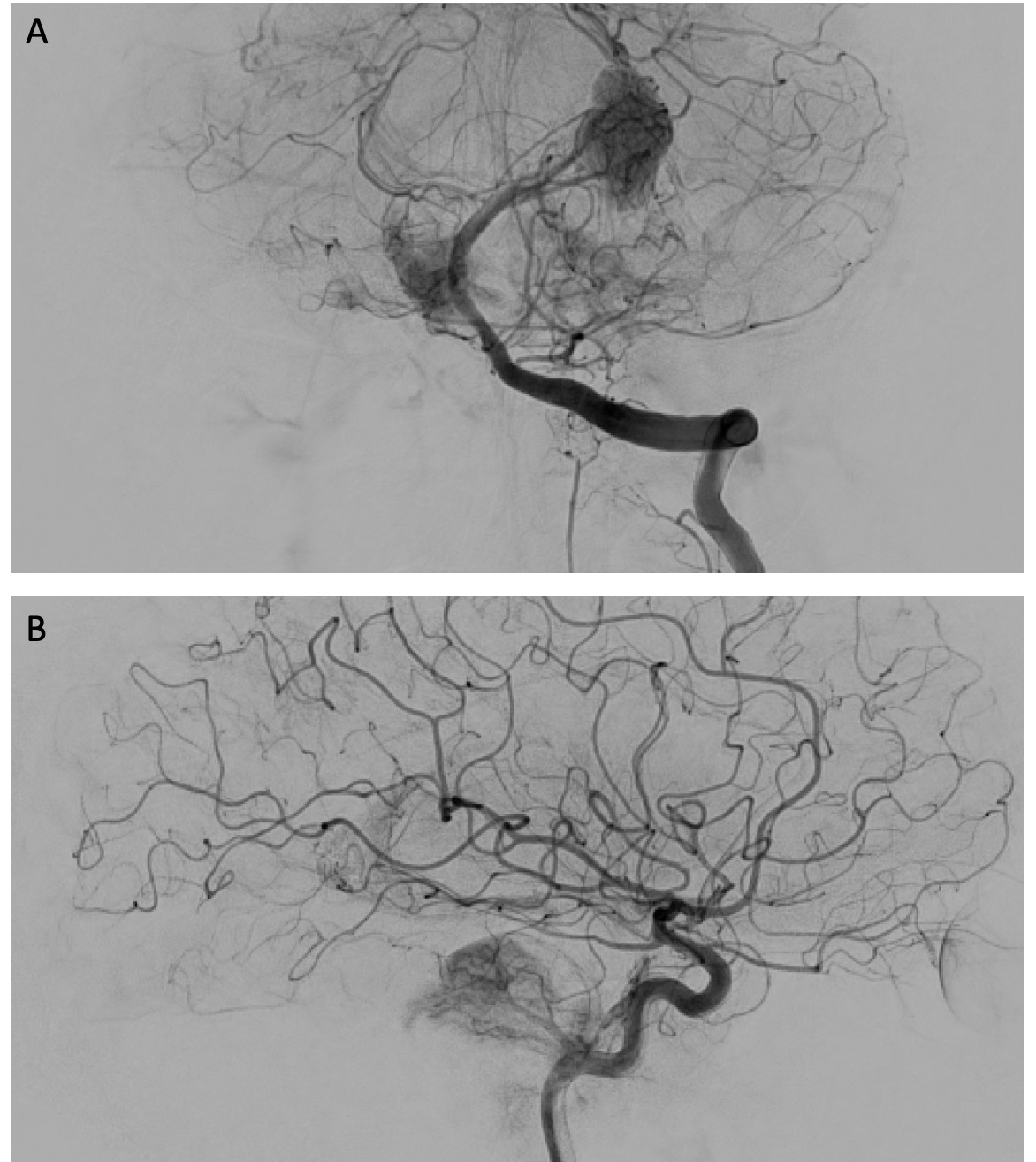 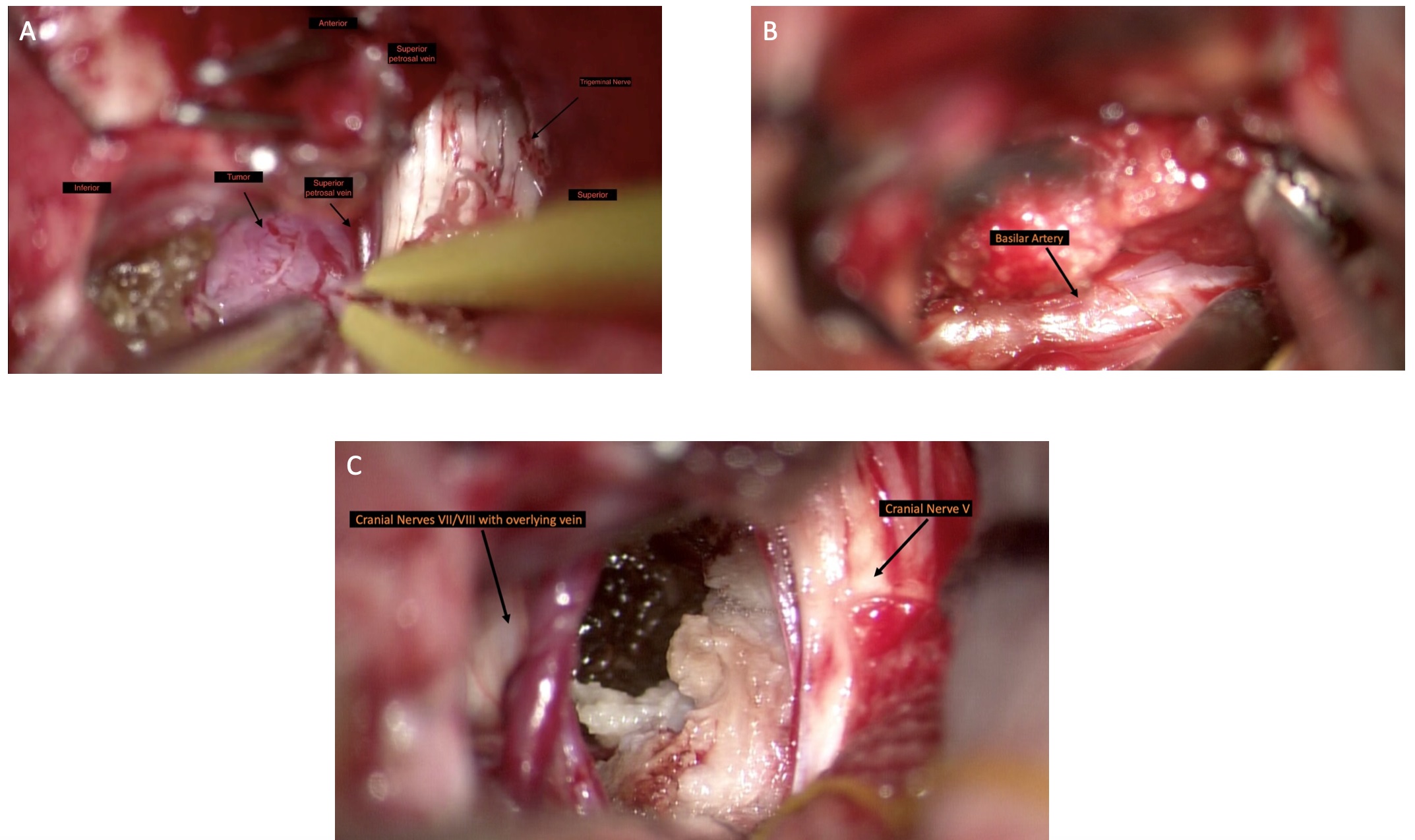 Postoperatively, the patient woke with a stable left House-Brackmann Grade II facial nerve palsy. She also had left CN VI palsy, diminished facial sensation in the V1 and V2 distribution, and left ear sensorineural hearing loss confirmed by audiogram. Postoperative MRI demonstrated small volume residual tumor along the left petroclival junction. Pathologic examination revealed fibrous tissue consisting of nests and clusters of cells that display hyperchromatic nuclei, coarsely granular chromatin, and moderate to abundant eosinophilic cytoplasm. Tumor cells are diffusely and strongly immunoreactive for synaptophysin and chromogranin. This pathologic profile was consistent with a paraganglioma (Figure 4). Additionally, the pathologic examination revealed a prominent vascular component, as expected based on preoperative angiogram findings. Given the neuroendocrinologic origin of the tumor, a metastatic workup was undertaken, which was negative. 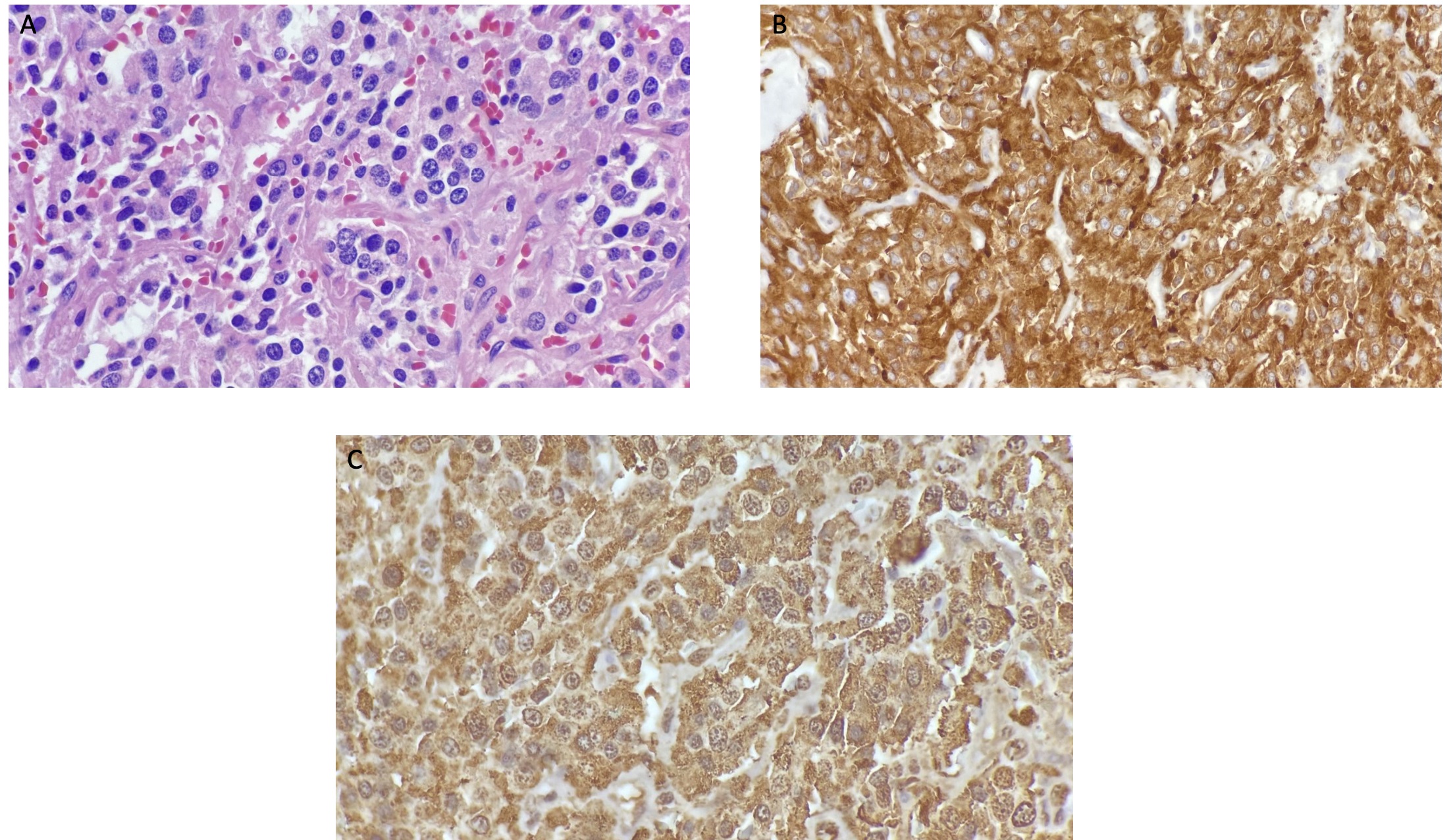 The patient had ventilator dependent respiratory failure postoperatively and underwent a tracheostomy. She was subsequently able to be weaned from the ventilator and her tracheostomy was downsized and decannulated prior to discharge from the hospital.

One month postoperative, MRI brain demonstrates stable residual. A discussion regarding management of residual was held with the patient and a multi-disciplinary tumor board, and the decision was made to refer to radiation oncology for fractionated conformal radiotherapy of small residual disease (Figure 5). She has had follow up with neurosurgery, neurotology, and endocrinology. She has ophthalmology consultation and genetic testing pending. Her neurologic status remains stable, with improving left hemifacial numbness, a left CN VI palsy, left HB II CN VII palsy, and left sensorineural hearing loss. 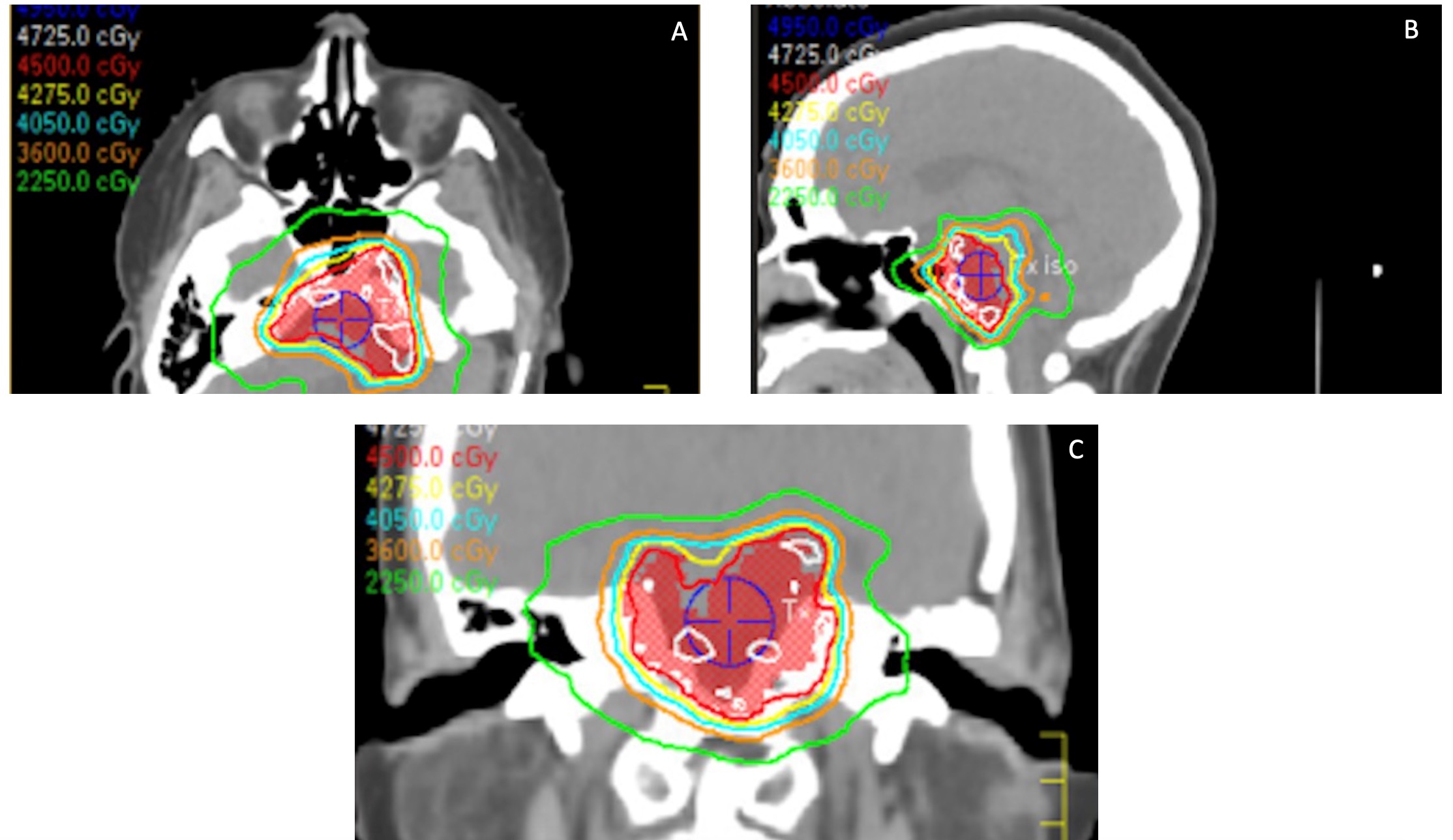 The paraganglion system is an important source of catecholamines during fetal development, and typiclly regresses after birth, leaving sparse autonomic nervous system cells in the carotid, aorticopulmonary system, jugular body, and other anatomic locations [15,16,17,18]. These cells act as chemoreceptors and/or secrete catecholamines during stress. Some genetic predisposition leads to failure of regress of these cells resulting in a paraganglioma. Paragangliomas are rare, often benign vascular tumors that originate from overgrowth of chromaffin cells of the paraganglia [15,18]. An overview the genetic predisposition is summarized below.

A large study of 501 Italian patients with secreting and nonsecreting paragangliomas found germline mutations in about 32% of cases [19]. The most common being RET, VHL, SDHB, and SDHD mutations [20]. RET predisposes to transcriptomic clusters that activate kinase pathways to facilitate cell division [21]. VHL mutations are part of the pseudohypoxia driven cluster that stabilize cell growth. SDHB mutations activate malignant conversion and are fequently associated with pheochromocytomas [19,22]. SDHD mutation leads to more head and neck paragangliomas in particular [19,22]. A postulated mechanisms is that this gene encodes a subunit of the mitochondrial succinate dehydrogenase complex and that allows chromaffin cells to survive in a hypoxic state [23].

The British Skull Base Society recently established a consensus for management of skull based paragangliomas. The consensus recommendations include multidisciplinary management, endocrine assessment, genetic assessment, and MRI of the head, neck, abdomen, and pelvis. Observation is reasonable for asymptomatic patients without catecholamine surges [36]. For symptomatic lesions with cranial nerve deficits, surgery is a viable alternative with suggested pre-operative embolization [3,8,14,37]. However, for non-resectable lesions radiotherapy may achieve tumor control with less morbidity, as attempted debulking may induce cranial nerve palsy [38,39,40,41,42]. In fact, tailored resection followed by radiosurgery may lead to more favorable outcomes in terms of tumor size and preventing cranial neuropathy [43]. If the residual lesion is irregular or encases cranial nerves, frationated radiotherapy may be the more ammenable option. The primary goal should be debulking to relieve pressure from the brain stem and cranial nerves. Factors like tumor location, size, and secretory status of the tumor influence the treatment choice. Radiation is often an appropriate first line treatment for tumors in typical locations; however, lesions like our patient’s in more atypical locations require ressection for decompression and tissue diagnosis.For secretory paragangliomas, anti-hypertensive medications are first line and should be initiated prior to surgical resection to carefully control blood pressure.

We present a unique case of a paraganglioma that mimicked a meningioma in that it was homogenously enhancing and appeared attached to the dura. MRI is the investigation of choice with typical findings for paraganglioma including a well-circumscribed, intensely enhancing mass lesion with few areas of cystic compartments. T2-weighted imaging (T2WI) occasionally will show a “cap sign” or “salt and pepper” appearance. When differential is in question, PET/CT may be helpful to differentiate. Once recognized, catecholamine levels should be measured and attempted resection with embolization of arterial feeders should be performed. Depending on approach and/or adherence to cranial nerves, residual can be treated with radiation therapy. Patients should be monitored closely and counseled appropriately regarding expected deficits and recovery.