Fabrication of Perovskite Solar Cells by the Smart Stacking Process

Organic-inorganic lead halide perovskite material-based solar cells (PSCs) are affordable and relatively easy to manufacture. They possess unique intrinsic properties like broad absorption spectra, fast charge separation, long diffusion distance of charge carriers, and long carrier separation lifetime, which ensure high power conversion efficiency (the highest efficiency recorded is 25.7%). This makes PSCs favorable for providing inexpensive solar electricity. However, several limitations hinder the mass production of PSCs, including 1) the high price of the electrode material (gold) and the hole-transporting material (Spiro-OMeTAD); 2) degradation of the perovskite absorber in the air due to the presence of moisture; 3) inability to use high-temperature regimes for the layers above the perovskite absorber since the perovskite materials decompose at relatively low temperatures.

All traditional ways of preparing perovskite solar cells require the sequential deposition of the functional layers of the device. A perovskite solar cell consists of a transparent conductive oxide layer on glass, an electron transporting layer (ETL), a perovskite absorber layer, a hole-transporting layer (HTL), and gold contacts. The most-commonly used HTL is Spiro-OMeTAD, which is costly and requires overnight oxidation, and leads to low reproducibility of the PSC device [1]. Inorganic HTL solutions were used in some studies, but they require high annealing temperatures of ~400°C [2], while perovskites decompose at temperatures below 300°C [3]. Thus, inorganic HTLs suit inverted PSCs with the p-i-n configuration. However, in this configuration, the ETL layer must be prepared by a low-temperature technique that is compatible with deposition in a dry environment [4,5]. Thus, in the sequential deposition process, one of the charge-transporting layers must be prepared at a low temperature.

In this manuscript, a new approach, called “smart stacking” was introduced. The method was first described in a patent [6]; however, a prototype was not described. The Smart Stacking Process (SMS) allows separate preparation of the hole-transporting and electron-transporting layers and the use of high-temperature processes for both layers. This eliminates any restriction for the temperature regime and the choice of charge transporting layers.

It also encapsulates the PSC during fabrication. The new SMS process significantly decreases the cost of the device by replacing the unstable organic HTL and the gold contacts with inorganic HTL and a transparent conducting oxide (TCO), respectively.

In the SMS process, the perovskite solar cell was assembled by stacking charge-transporting layers with perovskite precursor films. The ETL was planar and prepared as follows. A schematic representation of the SMS process is shown in Figure 1a. First, a 2 × 2 cm2 piece of fluorine-doped tin oxide (FTO) (10 Ω/sq, NSG, Japan) was etched with HCl and Zn to create a pattern of a small stripe of FTO ~0.7 cm in the center leaving the bare glass on the sides to prevent short circuits in the device. Then, the ETL layer consisting of TiO2 and SnO2 was deposited. The first layer of ETL, consisting of TiO2 (~50 nm), was spin-coated using an ethanol solution (99.9%; Sigma-Aldrich, US) containing 0.2 M titanium dissopropoxide bis (acetylacetonate) in 2-propanol (99.9%; Sigma-Aldrich, US) at 4,000 rpm for 20 s and 8,000 rpm for 10 s followed by annealing at 500°C for 1 h. Next, the second layer of the ETL, consisting of SnO2, was spin-coated using an aqueous solution of 0.075 M SnCl4·5H2O (98%; Sigma-Aldrich, US) at 3,000 rpm for 30 s. Then, the samples were annealed at 180°C for 1 h.

Subsequently, the layers were scratched from the ETL piece up to the etched central part and small plastic stripes were placed on the edges of the 2 × 2 cm2 piece to protect the central part from epoxy, as shown in Figure 1b.

Finally, the ETL and HTL pieces were stacked on each other. Then, a piece of glass 2 × 2 cm2 was put on top of them and pressure was applied to the whole setup using the rods of a pressing device.

The pieces were glued using Liquid Plastic Welder “Bondic” (Rob Harbauer, Germany) and the pieces were annealed under the pressure of the rods at 120°C for 1.5 h. The SMS-made disassembled cell is shown in Figure 1b.

A scanning electron microscope (SEM) VEGA4 XM SEM (TESCAN) was used to observe the morphological characteristics of the layers. The XRD patterns of the samples were recorded using the X-ray Diffractometer (XRD) Bruker D8 ADVANCE system with a Cu anode. For the analysis, the ETL/HTL pieces of a stacked PSC were dismantled. The relationship between current density and voltage (J-V) of the PSCs was measured using a solar simulator (SunLite Solar Simulator model 11002, Abet Technologies) with a computer-controlled digital source meter (X-200 Ossila, UK). The measurements were recorded under a 100 mWcm2 irradiance of the AM1.5G spectrum.

Perovskite solar cells were first described by the smart stacking process (SMS) in patent [6]. Although the study did not describe a prototype, it explained how the perovskite layer can form through chemical reactions when two pieces containing organic and inorganic precursor films of the perovskite MAPbI3 come in contact. Several differences occurred between the design in [6] and our study. First, we used FTO as both the cathode and anode. Our design also included the sealing of the device. Our HTL piece consisted of FTO/CuSCN/(FAI-MABr-MACl), while the ETL piece consisted of FTO/TiO2/SnO2/(PbBr2-PbI2)/(FAI-MABr-MACl).

We modified several steps in the process described in [6] to make a working photovoltaic cell.

Second, we followed the method described in the patent [6] and stacked the FTO/ETL/(FAI/MABr/MACl) and FTO/ETL(PbBr2/PbI2) layers. The samples under pressure were annealed at 120°C for 1.5 h. The results of XRD analysis of the perovskite layer formed in this stack are shown in Figure 2 (“planar inorganic layer”). The density of PbI2 is around 1.5 times more than the density of MAPbI3. Thus, the growing perovskite layer expanded [7]. After a thin dense layer formed on the surface of PbI2, it further decreased the penetration of MAI; thus, leaving a substantial amount of PbI2 unreacted [8]. 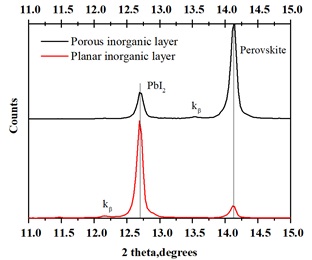 We used the mediator extraction treatment in which a pre-deposited DMSO-PbI2 complex film was converted into a porous film by rinsing it with IPA. The transparent inorganic film turned hazy within a few seconds. This caused the inorganic film to form a porous structure and the PbI2 crystallites to have a random orientation [9]. Thus, the film was porous and could accommodate more MAI. The porous structure of PbI2/PbBr2 is shown in Figure 3a. 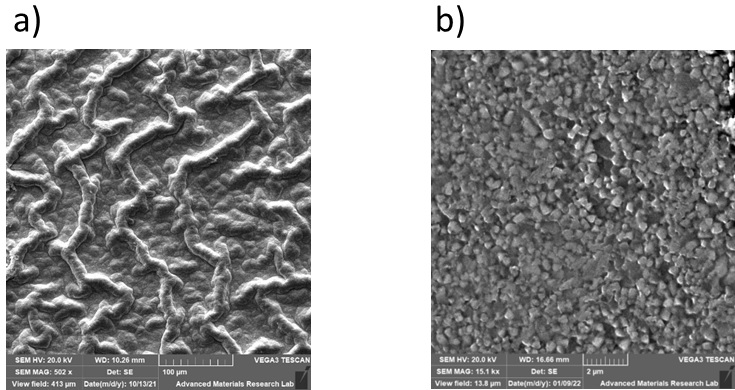 Figure 3 The SEM images of a) a porous PbI2/PbBr2 film; b) a perovskite film produced by the SMS process.

Next, stacking the inorganic and organic parts of the perovskite precursor did not provide a working photovoltaic cell (the photocurrent was zero). This was due to poor contact between the two pieces. Thus, the precursor organic films of halved concentrations were deposited on both pieces, i.e., the bare HTL piece and the ETL piece with the porous inorganic precursor film. This method ensured contact between the organic films of the same composition, leading to a chemical connection between the pieces.

Another challenge that we encountered regarding deposition in the SMS process was the sealing of the device with epoxy, which can protect the device from moisture and ensure close contact between the ETL and HTL pieces. Upon heating, epoxy went between the pieces before pressure could be applied and isolated the device. To avoid this problem, we pressed the ETL and HTL pieces with an additional piece of FTO (see Experimental procedure) at room temperature, after which we started the heating process.

In this study, we designed the first working cell prepared by the smart stacking (SMS) process. The J-V curves of the SMS- perovskite solar cells are shown in Figure 4. 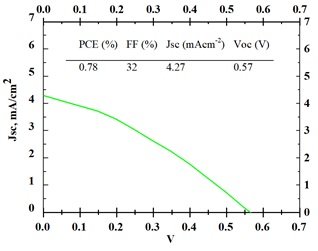 The Open-circuit voltage (Voc) and Fill Factor (FF) were relatively low because of the poor interface between the layers and poor morphology of the perovskite, as determined from the SEM images (Figure 3b). The obtained PCE of 0.78% showed that the photovoltaic cell was functional and the approach was favorable.

Our method had some advantages over the standard method of producing PSCs, which include:

1) The possibility to prepare separate hole-transporting and electron-transporting layers for PSCs, which can facilitate high-temperature treatments for both layers.

2) The new process did not require gold or spiro-OMeTAD, which generally contribute up to 30% of the total cost of fabrication of PSCs [11].

The authors would like to acknowledge the financial support from the University of Sharjah (Project# 2102143098).