An Unusual Case of Signet Ring Cell Cholangiocarcinoma: Case Report and a Review of Literature

Cholangiocarcinoma is an uncommon adenocarcinoma with poor prognosis. Signet ring cell cholangiocarcinoma is an extremely rare disease, with only 11 cases reported to date. However, its incidence is increasing. Similarly, there is an increasing incidence of other SRC tumors (colon, gastric, etc.) as well. Most cases have described a localized mass of signet ring cells, mostly in the common bile duct (CBD). A 69-year-old Caucasian man was admitted for jaundice and abdominal pain that began 3 days prior to his hospitalization. Workup including computed tomography (CT), endoscopic retrograde cholangiopancreatography (ERCP), and endoscopic ultrasound (EUS) was undertaken. Biopsies were taken during EUS from the CBD, disclosing signet ring cholangiocarcinoma. ERCP showed that the tumor diffusely infiltrated both the left and right hepatic ducts. This is the first description of a diffuse-type signet ring cell cholangiocarcinoma. A rapid downhill course precluded treatment. Thus, survival was extremely short – the patient passed away three weeks from the appearance of first symptoms. As the incidence of SRCs in general as well as the incidence of SRC cholangiocarcinoma seems to be on the rise, more cases are likely to be encountered. If our observation is confirmed, then perhaps the least invasive workup should be undertaken in patients with SRC diffuse-type cholangiocarcinoma.

Cholangiocarcinoma (CC) is a mucin-producing adenocarcinoma that arises from bile duct epithelium [1]. It is an uncommon adenocarcinoma with poor prognosis (5-year survival is less than 5%) and most patients initially present with an advanced disease [2]. Cholangiocarcinomas are grouped by their anatomic site of origin in a descending order: hilar (65%), peripheral (30%), and intrahepatic (5%). Diagnosis is made by biopsy, usually obtained via endoscopic retrograde cholangiopancreatography (ERCP) [1].

Signet ring cell (SRC) cholangiocarcinoma is an extremely rare variant, with only 11 cases reported to date (Table 1). All of these cases described a localized mass, usually in the extrahepatic biliary tract. To the best of our knowledge, ours is the first reported case of a diffuse SRC cholangiocarcinoma, with no distinct mass on imaging studies. Furthermore, the patient we describe had an extremely short survival compared with other reported cases, with only 3 weeks separating first symptoms from death. Figure 1 Computed tomography (CT) shows no evidence of tumor in the stomach. (A) Body of stomach (B) Pylorus of stomach(C) Gallstones. The biopsies showed a poorly differentiated signet ring adenocarcinoma (Figure 3). The tumor was at least stage IIIB (T1-3, N1, M0) according to the TNM classification of malignant tumors. An ERCP was also performed and showed multiple primary sclerosing cholangitis (PSC)-like strictures and beadings in the intrahepatic bile ducts (Figure 4). 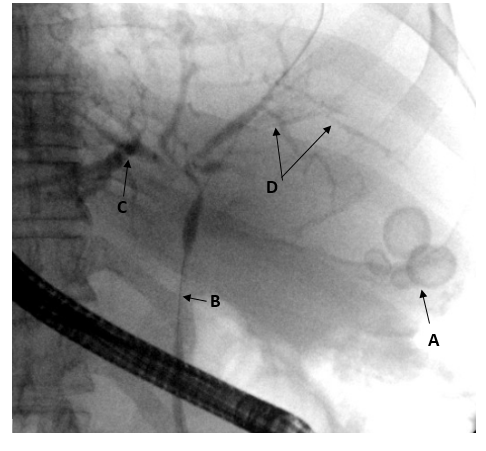 Attempted plastic stent insertion to the left system failed twice, and a metallic uncovered stent was inserted into the distal right system. Colonoscopy results were normal.

SRCs are signet ring-shaped cells that tend to infiltrate the organ wall diffusely, thickening it [1]. It presents mainly in the stomach but may also present in other organs: colorectal, prostate, bladder, and others [3]. Regardless of its location, SRC carcinoma carries a poorer prognosis then non-SRC carcinomas because of higher prevalence of peritoneal carcinomatosis, lymph node invasion at initial diagnosis, and lower R0 resection rate due to its infiltrative character [4]. This rule also applies to SRC biliary carcinoma; median survival in unresectable non-SRC cholangiocarcinoma is 5-15 months and 18-33 months after R0 resection, compared to 6 months in SRC cholangiocarcinoma.

The incidence of SRC gastric carcinoma is increasing, especially in western countries, despite the decreasing overall incidence of gastric cancer [3]. The incidence of signet ring cell colorectal carcinoma is increasing as well [5]. SRC carcinoma of the biliarytract, first described in 1999, is extremely rare with only eleven cases described thus far. Nevertheless, a clear trend of increasing incidence and increasing awareness can be seen: 0.14 cases per year between 1999-2006, one case per year between 2007-2014, and then increasing to two cases per year in 2015-2016. The main demographic and clinical data are summarized in Table 1. Asian extraction is predominant with 50% males, and all patients were admitted for jaundice.

Our case is unique because of two reasons. First, a very rapid downhill course and a short period of time between onset of symptoms and death occurred; only 3 weeks compared with a median survival of 6 months. Secondly, all cases of SRC cholangiocarcinoma reported so fardescribed a tumor mass: in seven cases the mass was localized to the CBD, in three other cases the mass was in the bifurcation of the hepatic ducts, and one was of unknown origin. In contrast, SRCs in other organs such as the stomach, colon, breast etc., tend to spread diffusely in the organ, not creating a distinct mass. In our patient as well, no mass was observed on CT. ERCP raised the suspicion of malignant involvement of the mid-CBD, infiltrating diffusely into both left and right hepatic ducts. This was later histologically confirmed.

To the best of our knowledge this is the first description of diffuse SRC cholangiocarcinoma, characterized by a short survival. As the incidence of SRCs in general as well as the incidence of SRC cholangiocarcinoma seem to be on the rise, more cases will be encountered. If our observation is confirmed, then perhaps the least invasive workup should be taken in patients with SRC pathology in biopsies.

DA was a senior surgeon caring for the patient.

BH M was the head of the surgical team caring for the patient.

BZ Y was the radiologist interpreting the CT scans.

BE was the pathologist interpreting the biopsy.

DA, A gastroenterologist, performed the endoscopic US study of the patient.

PK, A gastroenterologist performed the ERCP study of the patient.

All authors read and approved the final draft.