Regional brain atrophy and an escalation in vascular risk are associated to increasing age in normal cognitive healthy persons. The present post-mortem study compares the incidence of cerebrovascular lesions between young-aged, middle-aged, and elderly cognitive normal persons with additional 7.0-tesla MRI). The patients consisted of 10 young adults, 20 middle-aged adults, and 14 elderly ones. In addition to the macroscopic visible cerebrovascular lesions, a whole coronal section of a cerebral hemisphere was taken for the semi-quantitative evaluation of white matter changes (WMCs), cortical micro-infarcts (CoMIs), and cortical micro-bleeds (CoMBs). Three separate coronal sections of a cerebral hemisphere were submitted to T2 and T2* MRI sequences for semi-quantitative evaluation of the small cerebrovascular lesions. Arterial hypertension, hypercholesterolemia, and the use of anti-thrombotic agents were found to be more frequent in the elderly group, and to a lesser degree in the middle-aged group. The neuropathological examination showed more severe WMCs and an increased number of CoMBs in the elderly group. On NMR the increased severity of WMCs was only found in the frontal and occipital sections of the elderly brains. CoMIs were augmented in the central and occipital sections of the middle-aged and the elderly persons. CoMBs were increased in all coronal sections of elderly as well as middle-aged groups. CoMIs reflect most significantly the cerebrovascular involvement of the aging brain. The increase of WMCs is probably mostly related the aging related neurodegenerative progression. The increase of CoMBs is probably due to mixed cerebrovascular and neurodegenerative pathology.

Recent advances in medicine, global health, and biotechnology have led to prolonged life expectancy and, thus, a rapid aging population [1]. Regional brain atrophy and an escalation in vascular risk are associated to increasing age in normal cognitive healthy persons [2]. Magnetic resonance imaging (MRI) markers of vascular brain injury have a major clinical significance in evaluating cognition during the aging process [3]. Our previous post-mortem study shows that in elderly persons the severity of white matter changes (WMCs) is increased and also the incidence of cortical micro-bleeds (CoMBs) compared to younger ones [4]. WMCs in the temporal and occipital areas are found to be most associated with increasing age [5]. In a previous multi-center autopsy study, CoMIs are identified in 10% of cognitively normal adults [6]. There is also evidence that genetic factors can be responsible for their increase [7,8].

Forty-four patients, who had been admitted for a non-cerebral disease at the Lille University Hospital, underwent a general autopsy including the brain examination. None of them had a stroke history or known cognitive disturbances. Also none of them had carotid artery disease or atrial fibrillation. No signs of an autoimmune or inflammatory disease were observed. A previously obtained informed consent from the nearest family allowed an autopsy for diagnostic and scientific purposes. The brain tissue samples were acquired from the Lille Neuro-Bank of the Lille University, federated to the “Centre des Resources Biologiques” that acted as an institutional review board. The patients consisted of 10 young adults (27 ± 3 years), 20 middle-aged adults (52 ± 5 years), and 14 elderly ones (75 ± 7 years).

The standard diagnostic procedure consisted of examining samples of different brain regions in order to exclude an underlying neurodegenerative disease. Only one middle-aged person displayed a few neurofibrillary tangles. Also the incidence of the different macroscopic and microscopic visible cerebrovascular lesions in all brain sections was evaluated. In addition, a whole coronal section of a cerebral hemisphere, at the level of the mamillary body, was taken for the semi-quantitative evaluation of WMCs, CoMBs, and CoMIs. The mean values for WMCs were the average of the ranking scores: no change, a few isolated small hypo-density regions, frequent scattered ones in the corona radiata, and forming confluent lesions of myelin and axonal loss. For the other cerebrovascular lesions the mean values corresponded to their percentage number [9].

A 7.0-Tesla MRI (Bruker BioSpin SA) was used with an issuer-receiver cylinder coil of 72 mm inner diameter (Ettlingen, Germany), according to a previously described method. Three coronal sections of a cerebral hemisphere were submitted to T2 and T2* MRI sequences: a frontal one, a central one and one at the level of the parietal lobe. The brain sections, previously cleaned from formalin, were placed in a plastic box filled with salt-free water, of which the size did not allow significant tissue movements[10]. Semi-quantitative evaluation of incidence and severity of the small cerebrovascular lesions was evaluated in the same way as for the neuropathological examination. The ranking scores of the severity of the WMCs and of the incidence of the CoMBs and CoMIs were evaluated separately in the different sections [11].

Statistical analyses were performed comparing the young -adult group to the middle-aged and the elderly groups. Unvaried comparisons of unpaired groups were performed with the Fisher’s exact test for categorical data. The non-parametric Mann-Whitney U –test was used to compare continuous variables. The significance level, two-tailed, was set at ≤ 0.01 for highly significant and ≤ 0.05 for marginally significant.

The vascular risk factors were different between the different age groups: arterial hypertension, hypercholesterolemia and the use of anti-thrombotic agents were found to be significantly more frequent in the elderly group and to a lesser degree in the middle-aged group compared to the young-aged group. No gender differences were observed between the different age groups: male gender percentage of 60% in the young-aged, 57% in the middle-aged, and 62% in the elderly persons (Table 1).

Table 1 Comparison of the incidence of vascular risk factors between young-aged, middle-aged and elderly persons.

Table 1 Comparison of the incidence of vascular risk factors between young-aged, middle-aged and elderly persons.

The neuropathological examination only showed more severe WMCs and an increased number of CoMBs in the elderly group compared to the young- and middle-aged groups. No differences could be observed concerning the other cerebrovascular lesions, including the CoMIs (Table 2).

Table 2 Neuropathological comparison of the incidence of the cerebrovascular lesions between young-aged, middle-aged, and elderly persons.

Table 2 Neuropathological comparison of the incidence of the cerebrovascular lesions between young-aged, middle-aged, and elderly persons.

The NMR examination showed only increased severity of WMCs in the frontal and parietal sections in the elderly group. In contrast to what was observed on neuropathological examination, CoMIs were increased in the central and parietal sections of the middle-aged and the elderly persons. CoMBs were increased the all three separate coronal sections of elderly as well as of middle-aged groups (Table 3). The absence of small cerebrovascular lesions on MRI is shown in a brain section of a young-aged person (Figure 1). Their presence is demonstrated in the brain sections of a middle-aged (Figure 2) and an elderly individual (Figure 3).

Table 3 Comparison of frequency and distribution of the small cerebrovascular lesions between young-aged group, and the middle-aged, and elderly groups with magnetic resonance imaging.

Table 3 Comparison of frequency and distribution of the small cerebrovascular lesions between young-aged group, and the middle-aged, and elderly groups with magnetic resonance imaging. 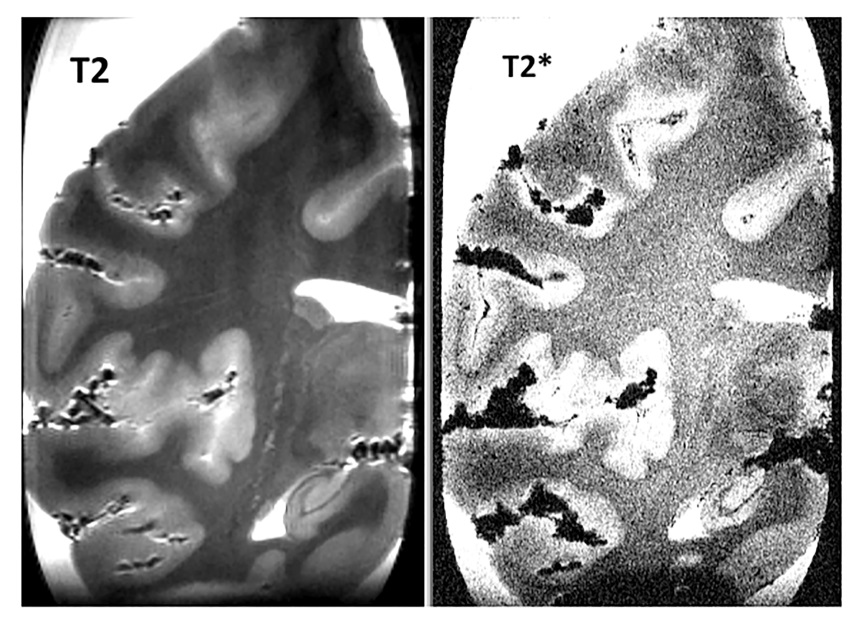 Figure 1 T2 and T2* sequences of a parietal cerebral coronal section in a young adult. No cortical micro-infarcts nor cortical micro-bleeds are observed. The white matter has a normal appearance on the T2 sequence. 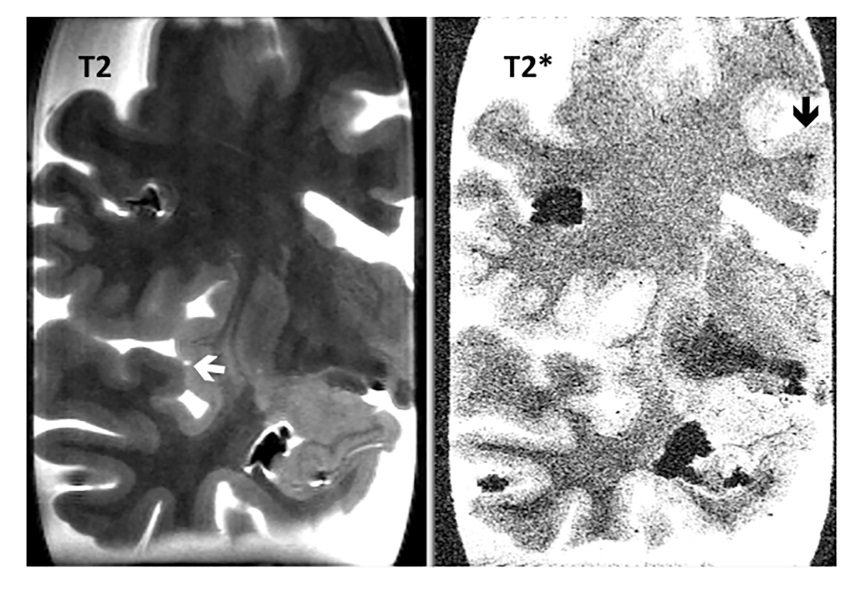 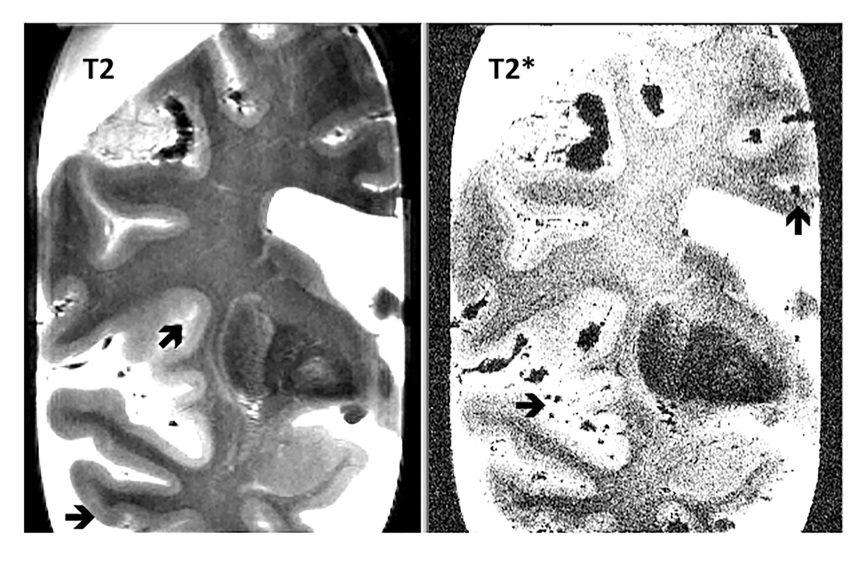 In one study, no clear topographic areas of predilection of increase of WMCs are observed [12]. Other studies, on the other hand found a predilection of WMCs in the temporal-occipital regions with older age, arterial hypertension, and poor global cognitive function [5,13]. Our study is in concordance with the latter one. Blood pressure has an influence on the myelin structure [14]. The magnitude of the WMCs differs according the treatment status and level of control of the arterial hypertension [15]. Midlife cardiovascular risk factors, mainly the impact of HDL cholesterol, leads to increased WMCs in later life [16]. Diabetes is also found to be associated to the presence of cerebral vascular lesions and neurodegenerative changes, leading to impaired cognitive functions such as a reduction of information-processing speed and of executive function [17]. In healthy middle-aged persons with coronary artery risk mild WMCs are observed on MRI [18].

Also in elderly persons without major risk factors for cerebrovascular diseases are the severity of WMCs and the incidence of CoMBs increased [19].

CoMIs are mainly found in neurodegenerative diseases associated to cerebral amyloid angiopathy (CAA) [20]. In our study the neuropathological examination revealed no cases of CAA in the three age groups. So the CoMIs must be related to the vascular risk factors and the main hallmark of a cerebrovascular influence.

The fact that the increase of CoMIs is not detected on the neuropathological examination is due higher sensitivity of MRI [21].

CoMBs and WMCs are not always due to cerebrovascular disease but can also occur in Neurodegenerative diseases with a low vascular risk [22].

No funding was received for the publication of this article.