Combination of the Hansemann-Boveri, Warburg, and Knudson Theories of Cancer, Based on Failure of Missegregation Damage Mitigation

Hansemann-Boveri’s aneuploidy theory, the Warburg effect, and the Knudson hypothesis can be viewed as different aspects of a single theory of cancer. In this, the extremely common chromosome missegregation may be the underlying cause. Chromosome missegregation is mitigated via several mechanisms. Cancer can occur only when all of these mechanisms have been inactivated in a single cell line, typically by mutation. There are at least five different repair mechanisms, implying a hit-factor of at least five. These mitigation mechanisms include—tetraploidization, cell division arrest, apoptosis, elimination by the immune system, and prevention of survival of cancer cell/macrophage fusions. The older theories may be explained in the light of this new hypothesis as follows: Hansemann-Boveri aneuploidy is caused by run-away missegregation; Warburg effect occurs due to mutational inactivation of the mitochondrial apoptosis mechanism, and the Knudson hypothesis is a subclass of the multiple-hit mechanism. The cancer type and its aggressiveness may be determined by the epigenetic make-up of the progenitor cells. Identification of all natural repair mechanisms of missegregation damage would be important for the prevention and treatment of cancer.

Among the numerous theories on causes of cancer [1,2,3], five have been of most importance in the twentieth century. They are Hansemann-Boveri’s aneuploidy theory [4,5,6], Warburg’s aerobic glycolysis theory [7,8,9], Knudson’s two-hit mutation theory [10,11], multistep tumorigenesis [12,13], and genetic toxicology [1,14,15].

Most solid tumors consist of aneuploid cells, with an abnormal number of chromosomes [4,5,6,16,17,18,19]. Hansemann observed asymmetric mitosis in skin cancer long before the 1900s and proposed that to be the cause of cancer [4]. Boveri observed that asymmetric mitoses in sea urchin embryos led to undifferentiated cancer-like growths [5,6].

Warburg observed that most cancers metabolized glucose by glycolysis and not by respiration, even in the presence of oxygen [7,8,9]; this implies that the mitochondria of cancer cells are largely inactive.

Knudson proposed that a two-hit mutation model could explain the incidence of retinoblastoma in dominant gene carriers as well as sporadic cases in non-carriers [10,11].

This has contributed to the current consensus of multistep tumorigenesis involving several random mutations in genes, such as tumor suppressor genes, oncogenes, or proto-oncogenes [12,13].

The notion that cancer is caused by environmental agents began with coal tar-induced cancers in chimney sweeps [20] and X-ray-induced cancers [21,22]. Tobacco and asbestos were also implicated to be carcinogens. Today genetic toxicology is a huge field, encompassing age, diet, lifestyle, and exposure to sunlight and chemicals [1,14,15]

One of the important methods in genetic toxicology estimates the effects of environmental agents on chromosome missegregation ( = malsegregation) in human cells [14,15] with the implicit assumption that missegregation is the ultimate cause of cancer.

The most common missegregation is when one daughter cell gets an extra chromosome and the other gets one chromosome less than normal. This can happen in several ways [23,24]; One is via non-disjunction, where sister chromatids fail to separate and move together to one pole. Another is when a lagging chromosome fails to be incorporated into the new nucleus; instead, it may form a micronucleus, with its own nuclear membrane. Counting these micronuclei gives the missegregation rate in buccal cells of the chin [14,25]. The most reproducible missegregation estimate is by the cytokinesis-block micronucleus cytome assay in blood samples. In this, phytohemagglutinin induces lymphocytes to divide, and cytochalasin-B stops the division, resulting in cells with two nuclei. Counting cells with two nuclei and a micronucleus gives the missegregation score [26,27]

Missegregation is dangerous in tissues with the function of producing new cells—skin, alimentary tract, and bone marrow. If missegregated aneuploid cells are allowed to divide, that may lead to run-away missegregation or chromosomal instability, causing large-scale aneuploidy, due to the mismatch between chromosome number and the division machinery. This would result in daughter cells with new permutations of chromosomes or genetic instabilities. Trisomic cells, with one extra chromosome, already have a mutation in the dose of all the genes on the surplus chromosome.

In run-away missegregation, there exist various types of mutations, especially if one or more of the 46 chromosome pairs are lacking. If the cell divisions reach the Hayflick limit [28] of about 50 divisions after fusion of sperm and egg, some chromosomes lose their protective telomeres. The broken ends of such chromosomes stick together, leading to breakage–fusion–bridge cycles, a probable mechanism for the formation of the Philadelphia leukemia chromosome [29]. Another way of mutagenesis in aneuploid cells is the instability of DNA in micronuclei. During cell division, the chromosomes in the micronucleus undergo ‘chromothripsis’, which literally means ‘chromosome shattering’. In this, the chromosomes fragment into small pieces that are stitched together in random order, forwards or backwards. Chromothripsis may cause tens to hundreds of mutations in one or two chromosome pairs in a single event [30,31].

Missegregation occurs in about 0.01 to 4 percent of divisions in cell-forming tissues [14,15], increasing with age. This means that we are vulnerable to cancer millions, if not billions, of times every day. Human cells have several mechanisms to prevent these potential cancers from turning into real cancers.

Tetraploidization: It is the prevention of missegregation by abolishing cell-division and forming a tetraploid cell. During mitosis, if the cell membrane encounters a lagging chromosome, the division stops and the cell then harbors a tetraploid nucleus [32].

Cell division arrest: The halting of cell division is regulated in many ways [33]. One is the induction of quiescence at the Hayflick limit [28], when some chromosomes lose their telomeres. Another is the stopping of division in cell cultures, when they reach confluence.

Apoptosis: In the case of malfunctioning, the cell most often will undergo the programmed cell death called apoptosis [34]. Mitochondria regulate apoptosis processes. Cancer cells typically exhibit dysfunctional mitochondria, such that the normal respiratory metabolism is sidelined, and energy is obtained through glycolysis—the Warburg effect [7,8,9].

Immune system elimination: Aneuploid cells may present unusual proteins at the cell membrane and be eliminated by the immune system [35]. Antibodies to some cancers are known [36] and antibodies are already in use in treatment.

Long-life prevention: Some cancer metastases may consist of fusions between cancer cells and macrophages [37,38]. The normal destiny of such fusions is apoptosis, but this response is apparently inactivated in these metastases. 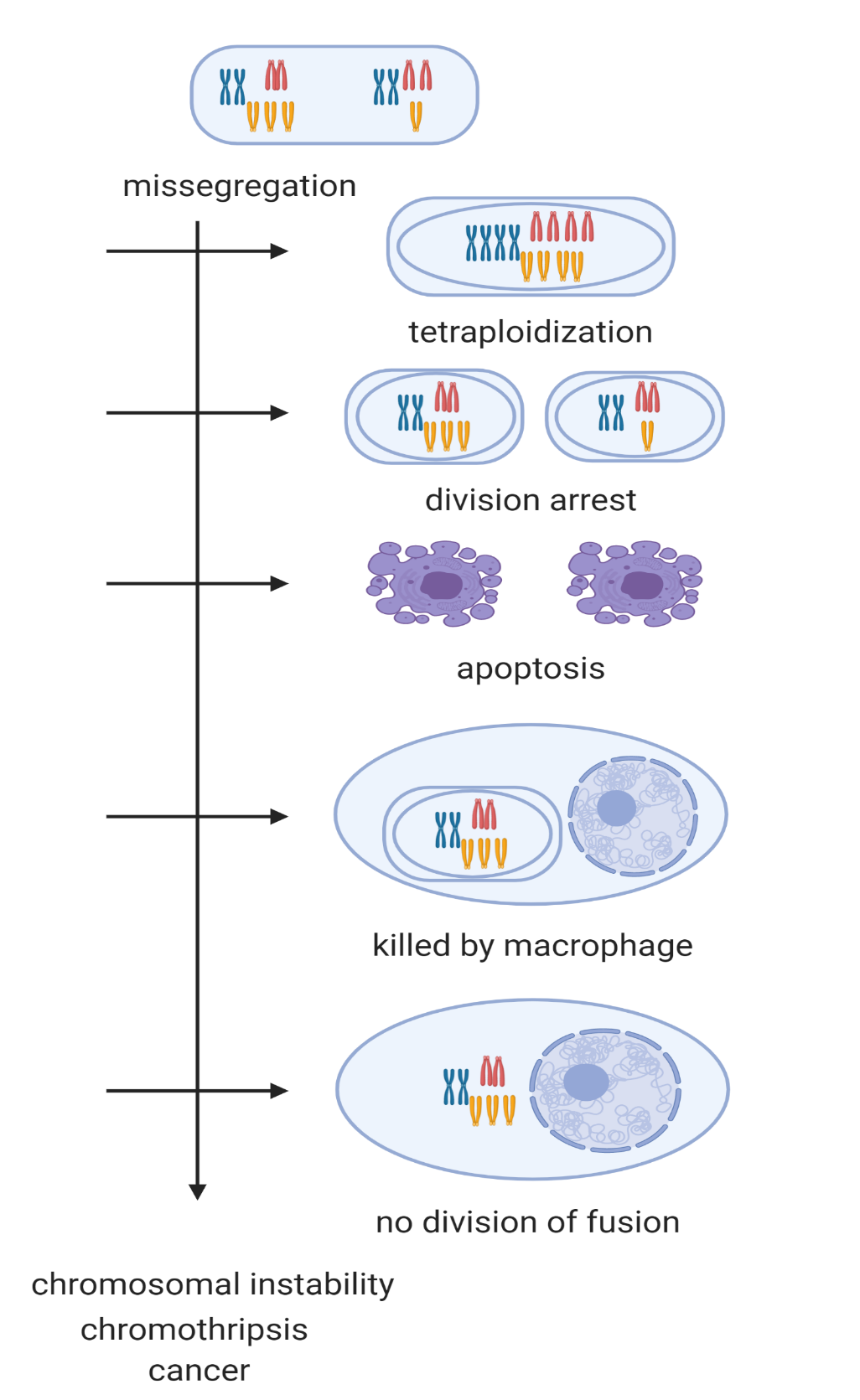 Figure 1 Progression from the common chromosome missegregation to chromosome instability and potential cancer is prevented by at least five mechanisms, implying that cancer only occurs after mutations have inactivated all the mitigation mechanisms.

The existence of at least five different mitigation mechanisms implies that there should be at least five different mutational events or “hits” in a cell line for cancer to occur. This is probably just a minimum number, as there may be numerous mechanisms for arresting cell division or inducing apoptosis. Mathematical estimates suggest six hits, based on cancer as a function of age [11,39]. In special cases, such as the retinoblastoma, only two hits suffice [10,11]. Large, long-lived animals, such as elephants, may have extra mitigation mechanisms [40].

Cancer type may depend on the genetic background and the epigenetic make-up of the progenitor cells [27,41]. The same five mitigation-inactivating mutations may have strikingly contrasting effects in the dividing cells of colon or breast tissues or the different progenitor cells of the skin because different combinations of genes are silenced in these cell types. For example, melanoma and basal cell carcinoma differ extensively in cancer-related genes [42], although both arise from dividing skin cells. Melanoma rapidly forms metastases; whereas basal cell carcinoma is fairly innocuous.

The dominant theories of the twentieth century on cancer may seem different. But, they may all emerge from the single hypothesis that cancer follows run-away chromosome missegregation, when all the repair mechanisms fail [43].

The Hansemann-Boveri theory that cancer is caused by aneuploidy is slightly modified to cancer is caused by run-away missegregation leading to aneuploidy. So aneuploidy is both, a symptom and a cause of cancer, because of the numerous mutations that may be generated. The Warburg effect emerges from the inactivation of apoptosis, due to the disruption of normal respiratory metabolism by mitochondria. Knudson’s two-hit mutation theory is a subclass of multiple-hit mutation theory. The latter is a consequence of the inactivation of all repair mechanisms.

The genetic toxicology paradigm that environmental agents cause cancer can be rationalized as agents inactivating repair mechanisms, usually by mutation.

None of the theories are wrong; however, they are far from complete. The present hypothesis may also have several gaps, as the phenomenon of metastases is not yet fully understood.

Kjeld C. Engvild did all the work.

There are no competing interests.