Background: A report of two new Moroccan cases with polymalformative syndrome, in which we identified similar but not identical sSMCs derived from chromosome 14.

Conclusions: Constitutional partial trisomy 14 has an expanded clinical spectrum as one case from the literature was associated with gonadal tumor development. Similar cases, including the ones reported here, need to be carefully followed up for this condition.

Polymalformative syndromes can be due to many reasons, including small genetic changes and cytogenetically visible chromosomal aberrations. A general description for the later was given in 2001 by Schinzel in the Catalog of Aberrations of Unbalanced Chromosomes in Man [1]; however, many conditions remained obscure as the resolution of classical conventional cytogenetic banding techniques does not exceed 5-10 MB [2].

Errors during maternal meiosis are responsible for most aneuploidies in humans. Apart from trisomies13, 18, and 21, no other complete gain of an autosome is compatible with life. Thus, trisomy of a complete chromosome 14 is frequently associated with spontaneous abortion, which only can be compatible with life when it is incomplete and/or mosaic [3,4,5]. The first case of proximal partial trisomy 14q was reported already back in 1971 [6]. Later it was suggested that the life expectancies of those affected are correlated with the size of the chromosomal segment involved [7,8]. However, reliable genotype-phenotype correlations are hampered by the fact that the majority of cases of proximal partial trisomy 14q were the result of parentally transmitted unbalanced translocations. Overall, about 35 cases have been reported presenting variable phenotypes [9,10,11], including mosaic trisomy 14 associated with a Dandy Walker malformation [12,13,20].

5-year-old male, delivered at term, as a result of an uneventful pregnancy. He was the second child of healthy and unrelated parents, and his older sister was healthy (Figure 1). His medical records included a birth weight of 2 kg (below the 5th percentile) with length and head circumference in normal ranges. At 18 months, he presented with global developmental delay including delayed sitting; at 2 years delay in speech was recorded. He also had the following clinical features: microcephaly, strabismus, delay in tooth eruption, mild intellectual developmental delay, slender fingers, a micropenis, and bilateral ectopic testicles (Figure 2, Table 1).

Figure 1 Pedigree of the first family. The arrow indicates patient 1. (The numbers 2, 4, and 6 indicate number of siblings.) 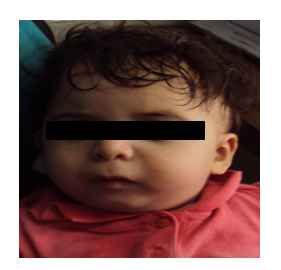 Figure 2 Dysmorphological features of the first case at the age of 5 years old.

Male with intrauterine growth retardation, delivered at term. At birth, his body weight was 1,800 g (below the 5th percentile); however, no other detailed informations could be acquired retrospectively. He was the only child of a non-consanguineous couple, experiencing one prior spontaneous miscarriage (Figure 3). At 1 year he showed growth retardation associated with developmental delay. Neurological examination revealed generalized hypotonia, which suddenly occurred at age of 10 months. Intellectual status could not be determined due to the young age of the patient. At 1 year he weighed 6 kg, was 65 cm in height, and his head circumference was 34.5 cm (below the 5th percentile each). Facial abnormalities included facial dysmorphism with trigonocephalic skull, an early closure of the anterior fontanel, and cleft palate. Additionally, he had overlapping toes and fingers, a micropenis, and bronchial congestion (Figure 4, Table 1).

There was no elevated maternal age at birth for either patient.

Figure 3 Pedigree of the second family. The arrow indicates patient 2. (The numbers 3 and 6 indicate the number of siblings.) 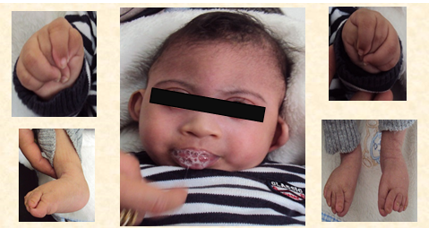 Figure 4 Dysmorphological features and limbs deformation of the second case at his 10th month of life.

Table 1 Summary of clinical features of our two cases and those previously reported with partial trisomy 14q21 in the literature.

Table 1 Summary of clinical features of our two cases and those previously reported with partial trisomy 14q21 in the literature.

Peripheral blood from the two patients and their parents was cultivated, harvested and R-banded according to standard procedure. Obtained metaphases were at the 400 band level and analyzed according to the International System for Human Cytogenetic Nomenclature 2016 [15,16].

Fluorescence in situ hybridization (FISH) was performed as previously reported [17]. The origin of the sSMCs present in cases 1 and 2 was elucidated using whole chromosome painting (WCP) probes for numbers 13, 14, 15, 21, and 22 and a multicolor banding (MCB) probe set for chromosome 14. Ten metaphases per patient were evaluated.

(The parents of both patients consented to the analyses and for clinical data and images to be published further if needed.)

The karyotype analyses revealed 47 chromosomes, both in cases 1 and 2, with an sSMC in all analyzed metaphases: 47,XY,+mar. This sSMC appeared to be acrocentric, being smaller than D-group and larger than G-group chromosomes (Figure 5). 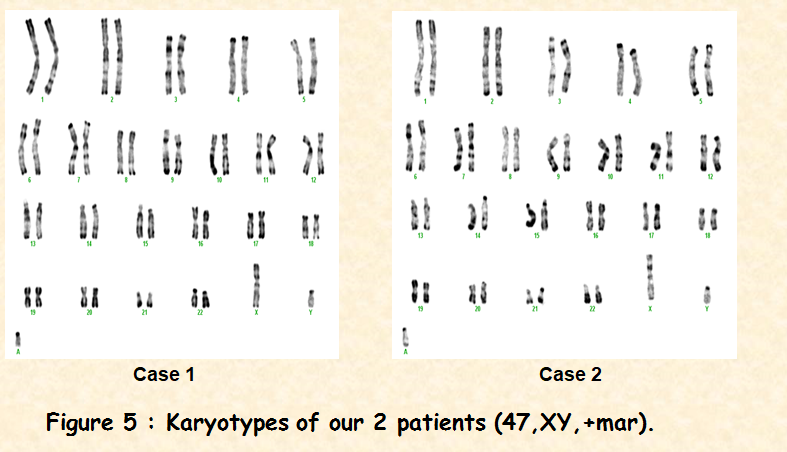 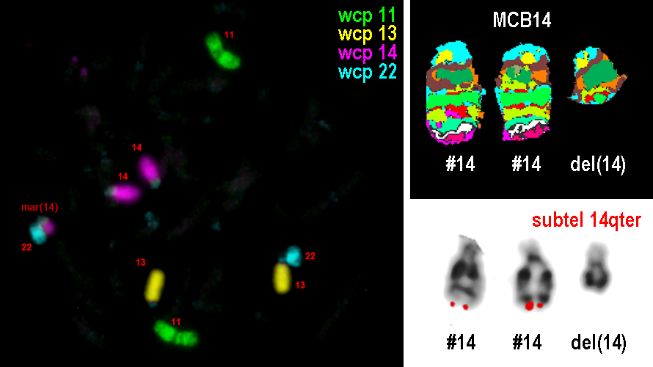 Figure 6 Characterization of the chromosomal marker breakpoints in case 1 by using MultiFISH probes 47, XY, and +del(14)(q21.1). 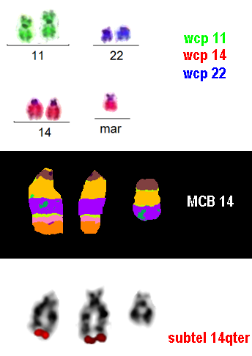 Figure 7 Characterization of the chromosomal marker breakpoints in case 2 by using MultiFISH probes 47, XY, and +del(14)(q21.2).

Genomic imbalances such as deletions, duplications, triplications or amplifications within the genome can cause mental retardation, congenital malformations, and miscarriages, and may remain unidentified. Their tiny size often defies the resolution of banding cytogenetics [18]. A special kind of cytogenetically detectable, but often not resolvable, clinical case presents in those patients with sSMCs, which appear in a frequency of about 1.5 in 1,000 in patients with mental retardation. Most sSMC cases are de novo (70%); maternal inheritance is present in 20% of sSMC cases and paternal in the remaining 10% [19]. Overall, phenotypic consequences of a de novo sSMC are still difficult to predict, as there are many unique cases among the patients with sSMC (REF: sSMC web page). Still >30 cases with partial trisomy 14pter to 14q13 are known from the literature; this condition is known to be associated with multiple congenital abnormalities, discrete facial dysmorphism, growth retardation, microcephaly, and severe intellectual delay [20,21,22,23,24,25,26,27,28,29].

The clinical variability noted between the four patients could be due to the additional abnormalities observed, especially for the third patient who carried another chromosome 14 derivative in mosaic: 48,+ mar1,+mar2[35%]/47,+mar1[65%]. This infant passed away at 1 month old as a consequence of multiple cyanotic incidents due to convulsion and aspiration and no autopsy was performed to determine other eventually potential causes of death. The clinical features of the four cases are illustrated in Table 1. The congenital malformations described in those four patients were broadly the same, especially for the major and constant signs later described in the literature for 14q proximal trisomy [14,30].

The fourth case was a girl carrying a trisomy X in addition to the partial trisomy 14. Her medical history revealed the occurrence, at the age of 16 years, of a stage 3C undifferentiated ovarian teratoma which was carrying the same constitutional chromosome aberration [14]. The phenotype of trisomy X  first described by Jacobs was limited to reduced intelligence in 70% of cases, and sometimes to behavioral disorders. In a third of the cases, patients may have early motor development and speech delays, a slight intellectual deficit, and a disruption in interpersonal relationships. The other two-thirds of the patients were considered normal and correctly adjusted. Clinical studies in adults with trisomy X have shown a predisposition to schizophrenia. This condition is also often associated with mental retardation with no evidence of tumor susceptibility [31,32,33].

Some constitutional gains of chromosomal material have classically argued for the potential tumor risk. Patients with Down syndrome are 10 to 20 times at higher risk of developing leukemia; the involvement of constitutional trisomy 8 can be associated with hematological neoplasia, and constitutional trisomies 9, 13, and 18 are related to various hematologic and solid tumors.  The constitutional 14q gain was then supposed to be a potential tumor development condition and that constitutional trisomies could be considered the first mutations in carcinogenesis [14]. Gene mutation and linkage analysis on human chromosome 14 has demonstrated the association of these genes with various pathologies; sometimes tumoral correlated with a poor prognosis [34,35,36,37,38,39]. The parental karyotypes in all four cases were normal.

In both cases reported here, as in other similar cases, genetic counseling for parents included risk of recurrence as well as the recommendation for regular and long-term follow-up, including vigilant monitoring by tumor marker assays (alpha-fetoprotein, beta-HCG). An orchidopexy was indicated in the patient with bilateral persisted ectopic testicles until the age of 5 years because this condition is well known for multiplying the tumor risk by 35 times. This risk appears to increase if it is associated with another potential risk factor such as the partial constitutional trisomy 14q [40,41,42].

More cases of partial proximal trisomy 14 need to be reported in the future to better understand the exact implications of this chromosomal imbalance. The identification of regions harboring potentially disease-causing genes present in enhanced or reduced copy numbers is only the first step. Additionally, future investigations of the potential influence of imprinting or interphase architecture when an sSMC is present with satellite (a, b, III) and ribosomal-DNA are necessary.

The authors are grateful to the families who agreed to publish their clinical details for the benefit of the others and for contributing to update the current literature.

This study had no funding source.