Objective: Elastography is a non-invasive method used to estimate the extent of liver fibrosis, measured as liver stiffness (LS). We examined the relationship between gastro-esophageal varices and LS and the value of LS for prediction of esophageal varices and varices bleeding. Methods: From 2014 to 2016, we conducted a retrospective study of 138 patients with chronic liver diseases, including non-alcoholic fatty liver disease (NAFLD), alcoholic liver disease, primary biliary cholangitis, and viral hepatitis. LS was measured by transient elastography, with the median values being considered the final result. Results: In 63 cirrhosis cases, LS was highest in alcoholic cirrhosis. In the 89 cases who underwent endoscopy, a significant correlation between LS and the presence or absence of esophageal varices was confirmed (present, 38.2 ± 22.6 kPa; absent, 14.3 ± 11.2 kPa; P < 0.0001), while there were no significant differences between the two groups in terms of the form and red color sign of varicose veins. LS was significantly higher in patients with a history of bleeding compared to those without (bleeding, 42.1 ± 26.7 kPa; no bleeding, 23.0 ± 19.0 kPa; P = 0.0047). In addition, LS of multiple bleeding varices tended to be higher than that of a single bleeding varicose vein, although this difference was not statistically significant. Conclusion: The LS index is useful for diagnosing gastro-esophageal varices and as an indicator of the risk of bleeding or intractability. However, the cut-off values differed among the various liver diseases, so it is important to determine cut-off values for each separate etiology.

In chronic liver disease, the diagnosis of hepatic fibrosis grade is important for predicting the risk of liver cancer, and determining the treatment methodology. Liver biopsy is currently the gold standard for the assessment of liver fibrosis; however, this is a high-risk examination, especially for liver diseases with reduced platelet counts and prolonged prothrombin time. Transient elastography (TE) utilizing liver elastography principles is a simple and non-invasive technique for the measurement of liver stiffness (LS). LS determined by TE has been reported to show correlations with histopathologic liver fibrosis in various liver diseases, such as viral liver disease and nonalcoholic fatty liver disease (NAFLD) [1,2,3], making it possible to estimate fibrosis based on liver elasticity. TE measures elasticity in terms of the elastic modulus (kPa), with higher kPa values indicating greater progression of fibrosis. Although the elasticity cut-off reported in the literature varies, 7 kPa or higher is considered to indicate significant fibrosis, and 10.1–17.6 kPa or higher is considered to indicate liver cirrhosis [1,4].

Gastro-esophageal varices are among the three major complications of cirrhosis, resulting largely from portal hypertension, a key factor in the prognosis of liver cirrhosis. Therefore, in patients with chronic liver disease, regular use of upper gastrointestinal endoscopy is necessary to check for the presence of varicose veins, their size (form; F) and red color (RC) sign [5]. Management of varices that present the possibility of bleeding requires the use of drugs or endoscopic treatment. However, upper gastrointestinal endoscopy imposes a burden, and its optimal usage frequency is unclear. In addition, there are some uncertainties regarding the stage at which an endoscopic examination is needed and the risk factors of varices bleeding. The RC sign is insufficient for predicting risk markers. Recently, the European Liver Congress issued a statement that the combination of LS and blood platelet counts was a useful criterion for endoscopic assessment of gastro-esophageal varices [6].

In the present study, we examined the relationship between gastro-esophageal varices and LS by TE. Specifically, we investigated the potential of LS as a predictive marker of the presence of varices and bleeding risk.

Regarding the diagnosis of underlying liver diseases, NAFLD was identified utilizing the established practice guidelines for the diagnosis of NASH/NAFLD [9]. Alcoholic liver disorder was diagnosed according to the diagnostic criteria [10] of the Japanese Society for Biomedical Research on Alcohol. Viral hepatitis was diagnosed on the basis of HBs antigen-positive or HCV RNA-positive tests (HBs QT abbot and Abbott RealTime HCV (ART) assay. Abbott Laboratories, North Chicago, IL, USA). PBC was diagnosed if at least two of the following internationally accepted criteria were met: biochemical evidence of cholestasis based mainly on alkaline phosphatase elevation, presence of serum anti-mitochondrial antibodies, histological evidence of nonsuppurative destructive cholangitis, and destruction of interlobular bile ducts [11].

We performed upper gastrointestinal endoscopy in 89 patients and examined the presence or absence of gastro-esophageal varices and endoscopic findings of varices (form, RC sign). Endoscopic treatment of varicose veins was conducted in 31 patients. Of these, 15 patients received treatment for bleeding of varicose veins, and 16 underwent hemostatic therapy because of RC without bleeding.

Informed consent was obtained from all participants before enrollment in the study. The study protocol conformed to the ethical guidelines of the 2008 Declaration of Helsinki and was approved by our institution’s research committee (approval number 4200).

According to the underlying cause of liver disease causes, 138 patients were classified into the following five groups: NAFLD, alcoholic, viral hepatitis, PBC, and other liver diseases. Table 1 shows the overall LS, age, sex, blood data, and liver cirrhosis complication rate for each group. LS, including non-cirrhotic, was significantly higher in alcoholic liver disease and lower in NAFLD.

Table 1 Clinical and laboratory findings in the study population. 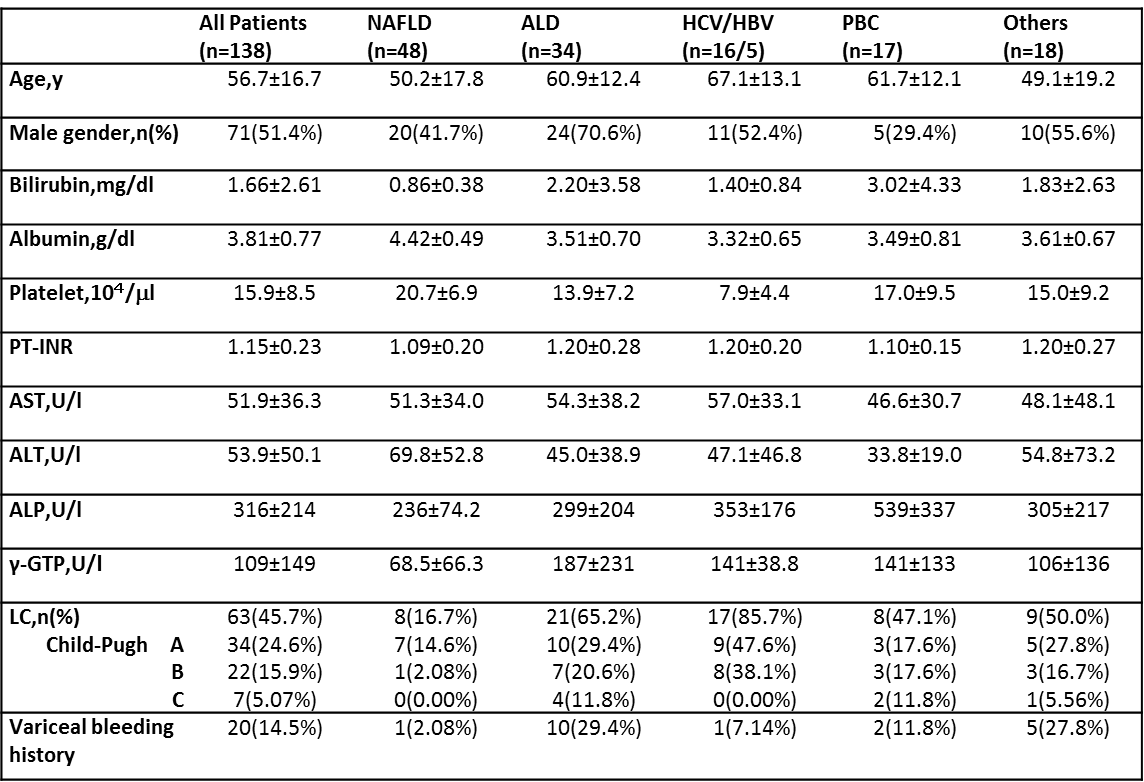 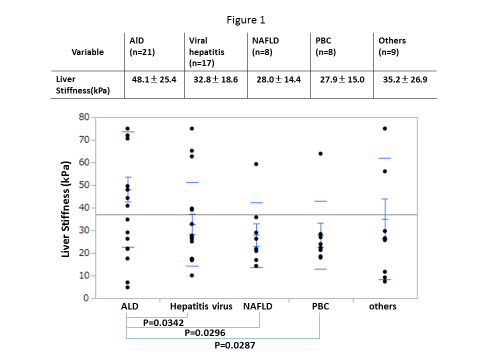 There was no association between sex or age and LS. Regarding the relationship between Child–Pugh classification and LS, patients with Child–Pugh grades A, B and C had LS values of 16.8 ± 14.9 kPa, 40.0 ± 23.8 kPa, and 59.8 ± 24.1 kPa, respectively. These results indicated that LS was significantly associated with hepatic reserve function. A significant inverse correlation was observed between LS and platelet counts (P < 0.0001, r = 0.5860). 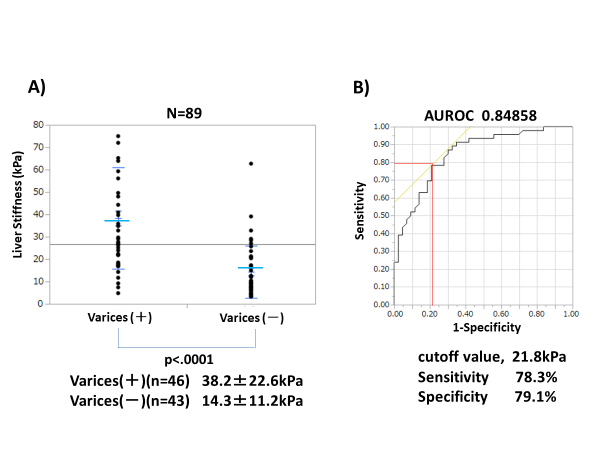 Figure 2 A) Comparison of LS in patients with chronic liver diseases with and without esophageal varices. Data are expressed as mean ±SD. B) Diagnostic ability of LS for liver cirrhosis. Optimal cut-off value of LS was set at 21.8 kPa, with a sensitivity of 78.3% and specificity of 79.1%.

Next, the correlation of LS with platelet counts was assessed (Table 2).

Table 2 Diagnosis of esophageal varices based on liver stiffness and platelet counts. 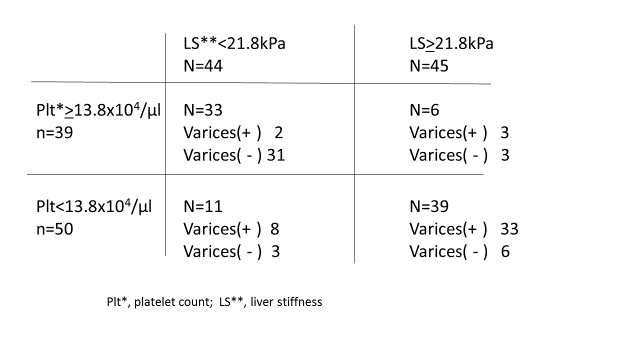 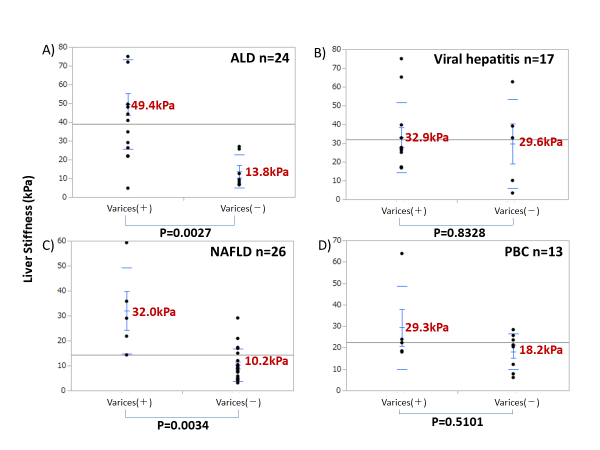 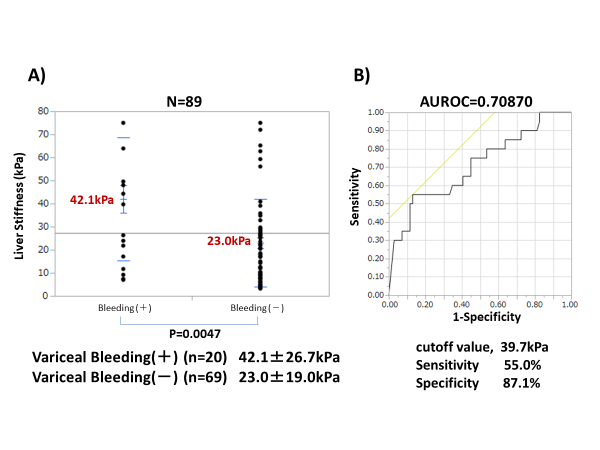 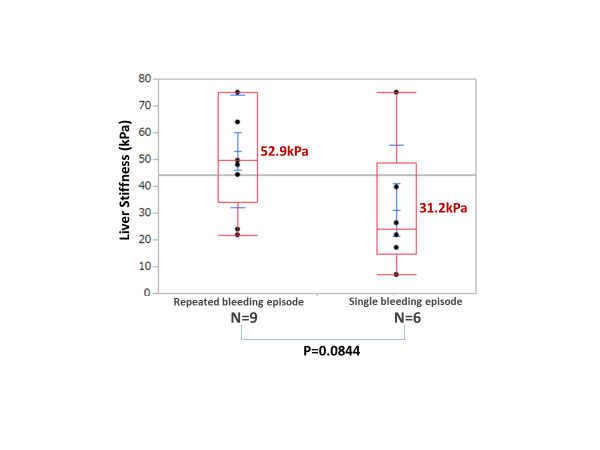 The results of our study implicate LS as a diagnostic indicator of gastro-esophageal varices, with a sensitivity of 78.3% and specificity of 79.1% when the cut-off value for LS is set at 21.8 kPa. Of 33 patients with platelet counts ≥138,000/μl and LS <21.8 kPa, only two patients had esophageal varices (93.9% specificity). Thus, since patients with these conditions have a very low risk of gastro-esophageal varices, unnecessary endoscopy can be avoided. The particular advantage of these criteria is that they are noninvasive; therefore, the cost and complications of endoscopy can be eliminated. In accordance with our data, Franchis et al. (6) demonstrated that patients with platelet counts ≥150,000/μl and LS <20 kPa were at very low risk of developing esophageal varices.

In refractory cases with multiple bleeding varices, LS tended to be higher in alcoholic, NAFLD, viral, and PBC cases, even after endoscopic treatment. This is the first report regarding the relationship between refractory cases and LS, and our findings suggest that LS measurement might make it possible to identify patients with an increased risk of variceal bleeding that could not be previously determined by endoscopy.

However, there are some problems with this approach. It is difficult to measure LS in patients with ascites or obesity. In particular, in NAFLD patients with a BMI ≥28, LS has wide dispersion [22]. In addition, LS is known to be affected by inflammation, jaundice, and congestion, as well as liver fibrosis [23]. Therefore, these factors must be taken into consideration when analyzing the results of LS measurements.

It should be noted that a the single-center study design and the relatively sample size are limitations of this study. In addition, we focused on the risk of bleeding and repetitive bleeding. As far as we know, there are no reports on the relationship between repetitive bleeding and LS. In future studies, we plan to conduct multi-center trials using much larger samples sizes.

In conclusion, although an endoscopic form (F2 or higher) and RC-positive status are established risks for variceal bleeding and criteria for preventive therapy, evaluation of LS by a non-invasive method is not only effective for the diagnosis of esophageal varices, but also for bleeding risk evaluation. In addition, patients with LS <21.8 kPa and platelet counts ≥138,000/μl have a low risk of gastro-esophageal varices, allowing endoscopy to be avoided. However, optimal cut-off values for LS and platelet counts for gastro-esophageal varices differ among the various liver diseases; Therefore, it is important to establish optimal cut-off values for each.