Advances in Environmental and Engineering Research

Advances in Environmental and Engineering Research (AEER) is an international peer-reviewed Open Access journal published quarterly online by LIDSEN Publishing Inc. This periodical is devoted to publishing high-quality peer-reviewed papers that describe the most significant and cutting-edge research in all areas of environmental science and engineering. Work at any scale, from molecular biology through to ecology, is welcomed.

Main research areas include (but are not limited to):

Advances in Environmental and Engineering Research publishes a range of papers (original research, review, communication, opinion, study protocol, comment, conference report, technical note, book review, etc.). We encourage authors to be succinct; however, authors should present their results in as much detail as necessary. Reviewers are expected to emphasize scientific rigor and reproducibility.

Since oil exploration began, oil spills have become a serious problem. When drilling for oil, there is always a risk of an oil spill. With the new development of technology over the years, oil spill detection has become much easier making the clean-up of a spill to happen much faster reducing the risk of a large spread. In this study, remote sensing techniques were used to detect the Deep-water Horizon oil spill through a change detection method. The change detection method allows the viewer to determine the difference of an area before and after an oil spill as well as detect the irregular difference on a surface. To confirm the effectiveness of change detection method, two approaches were used each showing the differences in the images before and after the spill allowing the size and shape to be identified. The swipe tool in the ArcGIS software was used to visually show the changes. The difference tool was also used to both visually and statistically to investigate the difference before and after the Deep-water Horizon oil spill event.

Oil spills have a negative impact on the environment all over the world in offshore and onshore industries [1,2]. Oil Spills happen in different scales. The spills can be small, such as spills when refuelling a ship, or they can be large spills such as spills that happen when pipelines break, oil ships sink, and when drilling operations go wrong. When an oil spill occurs in the ocean, it becomes a serious problem because it can harm ocean creatures, make seafood unsafe to eat, and create pollution. Oil spills can also harm ocean life in two ways of fouling and oil toxicity. Fouling is when oil physically harms a plant or animal, such as coating an animal in oil making them unable to move. Toxicity is when the toxic compounds cause health problems, such as heart damage and immune system effects [3]. This can become harmful to fisheries and eventually move up the food chain to consequently effect the health of humans [1]. Although clean up occur when an oil spill occurs, the cleanup activities can never remove 100% of the spills [4].

As oil spills can be hard to detect from the ground, satellite imagery allows the researchers to view the spill overhead with a larger view and coverage of the spill location [5]. Remotely sensed images have successfully been applied to determine the size of the oil spill, as well as the size of the threat to the surrounding habitats [6,7,8]. Various methods, such as change detection algorithms can provide valuable information about oil spill [2]. Remote sensing in general provides the advantage of being able to observe events in remote and inaccessible area with a large overhead coverage. This allows the detection of the size and shape of the spill to be considered easier [2]. On the other hand, change detection is a method that tries to investigate the changes occurred in a given area in time. A series of satellite images and change detection approaches make it easy to compare the size and shape of oil spills visually and statistically. For ocean spills, remote sensing can provide information on the rate and direction of oil movement through multi-temporal imaging [9].

Remote sensing systems for oils spill detection include infrared video and photography from airborne platforms, thermal infrared imaging systems, airborne laser fluourosensors, airborne and spaceborne optical sensors, as well as airborne and spaceborne Synthetic Aperture Radar systems [2]. For example, Laser fluorosenors, which are as active sensors, can be used both daytime and nighttime. They work for oil spills as certain compounds such as aromatic hydrocarbons present in oil absorb ultraviolet laser light [10]. When flying over the sea, the laser fluorosensors measures the fluorescence from the natural substances and the scattering in water. When oil is detected in the water, the scattering decreases and the natural fluorescence signals are overlaid by the oil. The difference in the backscatter allows the sensor to detect change in the surface indicating the spill. Figure 1 illustrates how oil spill is seen in a laser fluorosensors data. 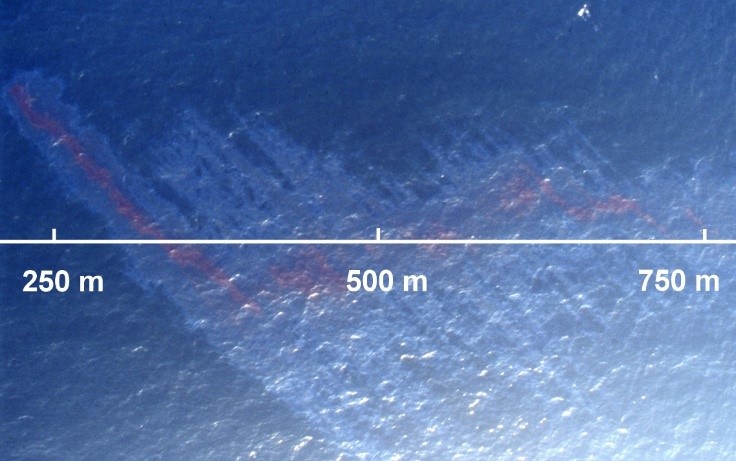 Additionally, SAR sensors provide many advantages for oils spill detection [11]. SAR systems can provide data under poor weather conditions and during darkness. The method of using SAR distinguishes oil spills from other surface features. SAR satellites map changes to electromagnetic waves by sending and receiving microwave pulses and compiling the result in a two-dimensional image. Oil has an absorbing effect on such waves, which reduces backscatter on the water surface. This implies no radar return will be generated when oil is present on the water surface [11]. Figure 2 demonstrates oil spill detection in an SAR image. 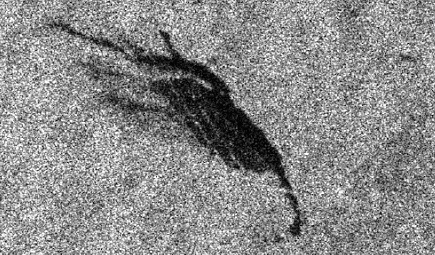 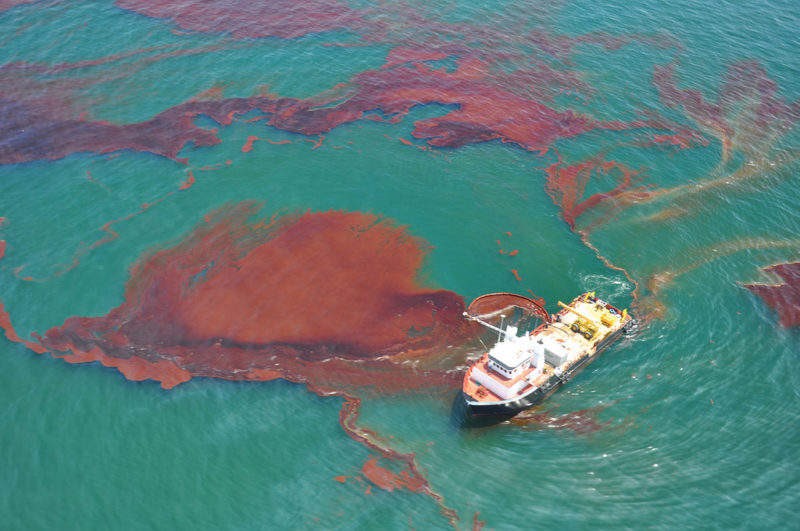 The purpose of conducting this research is to identify how the change detection method can be used for oil spill detection from optical remote sensing data. These methods can produce changes visually and statistically and provide a better understanding of the oil spills.

The area selected for this research is the largest oil spill in the U.S history. The Deepwater Horizon spill, which happened in the Gulf of Mexico on April 20, 2010. After the platform blew up a total of 134 million gallons of oil leaked into the Gulf of Mexico. The oil slicks were observed across a total of 43,400 square miles. With this being the largest spill and the fact that overflights could not get to capture the extent of the spill, it was realized that satellite remote sensing had to be used for mapping oil on water [16].

In this study, the Landsat 7 optical satellite images were used to detect oil spill in the Gulf of Mexico. The data were downloaded from the Earth Explorer website (https://earthexplorer.usgs.gov/). The Landsat 7 with the ETM+ sensor, as a whiskbroom scanner, provides repetitive satellite images of globe in eight different spectral bands, including visible, near-infrared, shortwave infrared, and thermal infrared [17]. Two Landsat 7 images before and after the oil spill were used to detect oil spill through change detection methods. As discussed, the spill happened on April 20, 2010 and, thus, the images captured on March 1, 2010 and May 1, 2010 were utilized.

Change detection methods are generally divided into two groups of pre- and post-classification techniques. Change detection can be used to compare the changes in scenes of the same location acquired at different times. In this study, a pre-classification change detection method was employed. To this end, the Swipe tool in the ArcGIS software was initially used to visually investigate the changes due to oil spill. The Swipe tool reveals what is beneath the selected layer interactively. It is visually showing the difference between what the satellite image should look like and then what it looks after the spill occurred. This makes it easy to determine the location, size, and shape of the spill from a visual perspective. Subsequently, the Difference tool was employed for both visual and quantitative change analysis. The Difference tool computes a change between two selected images, using pixel over pixel comparison. In other words, this tool subtracts the pixels of two images before and after the oil spill event and computes a difference. 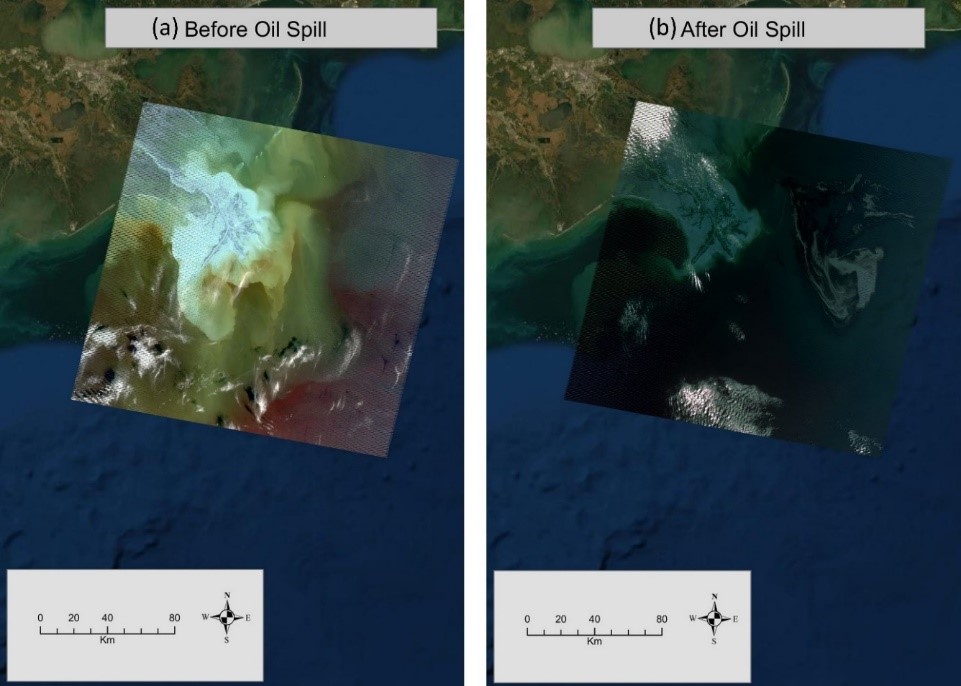 As discussed, the Swipe tool was initially used to visually investigate the effects of oil spill on ocean water (Figure 5). By looking at both satellite images it is clear to see the size and shape of oil spilled in that location. 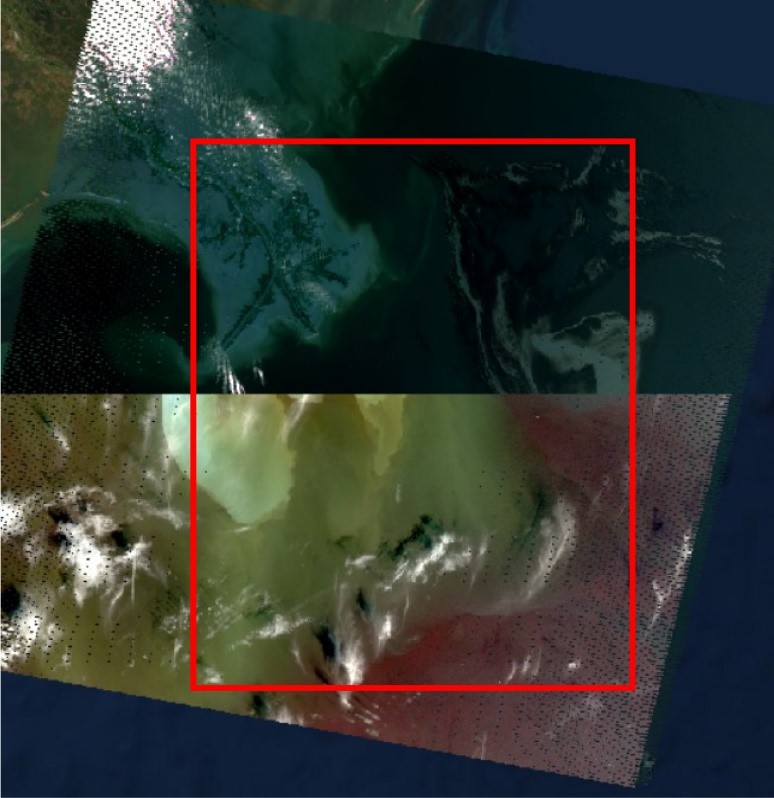 The Difference tool within ArcMap was subsequently utilized for oil spill change detection. To this end, the difference between two images were computed, where the result is demonstrated in Figure 6. In this Figure, the red and green colors represent a high change, and the orange/yellow represents very little/no change. It is also noticed that there were some other areas with high change values. The reason for the white areas as well as some of the other red areas was the local cloud cover in one of the satellite images. 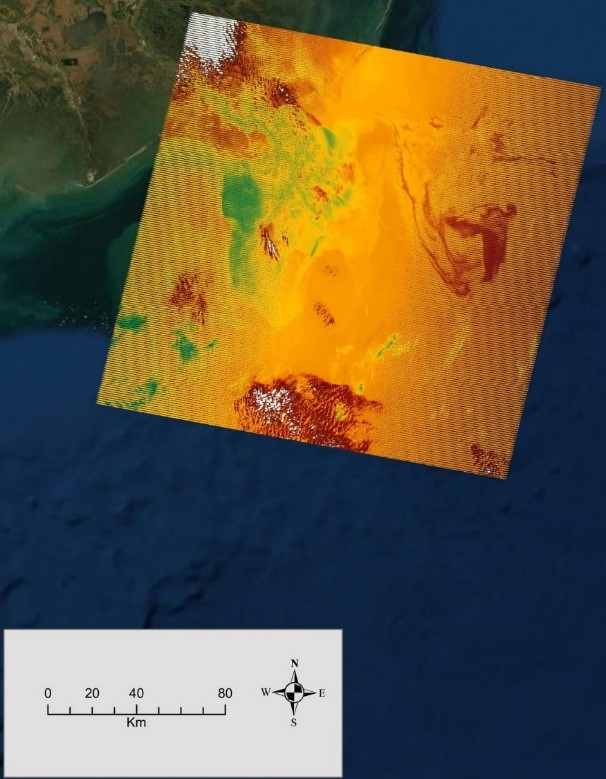 It was observed that using image analysis tools within ArcGIS was very simple but efficient approach to detect changes due to oil spill. Using both the Swipe and Difference tools, we were able to show the size and shape detected of the spill by analyzing the changes in the ocean surface on both images.

Although the method used in this study had several advantages, it also contained some limitations. For example, the spatial resolution of Landsat 7 satellite is 30m, restricting the detailed analysis of oil spill. Moreover, clouds are present in these optical satellite images. This can cause misinterpretation of the results because cloud also can result in the high changes (see Figure 6).

Oil spills are ongoing threats to the environment. Since the Deep-water Horizon spill happened in the Gulf of Mexico in 2010, remote sensing has been used more in the field of oil spill detection. The results of this study showed that remote sensing could effectively detect any changes due to oil spill. The discovery of using remote sensing has made detecting the size and shape of oil spills much easier. Future studies should develop more advanced methods using better-quality satellite images.

To receive the table of contents of newly released issues of Advances in Environmental and Engineering Research, add your e-mail address in the box below, and click on subscribe.